Apologies for the gap in updates — everyone at Project SNOWstorm does this as a volunteer, and this past week a number of us were out of touch and in the field, leading birding trips or studying nesting goshawks, among other day-job kinds of things. But there have been some interesting developments in the past week and a half that we’re anxious to share in this long and detailed update.

Dakota moved out of the Souris River valley in southern Saskatchewan, and on April 21, she checked in very briefly from an area northwest of Regina, SK, 165 km (102 miles) from where she’d been April 10. We’re not sure how many more connections we’ll get from her as she pushes farther north, but we’re hopeful for at least one more. 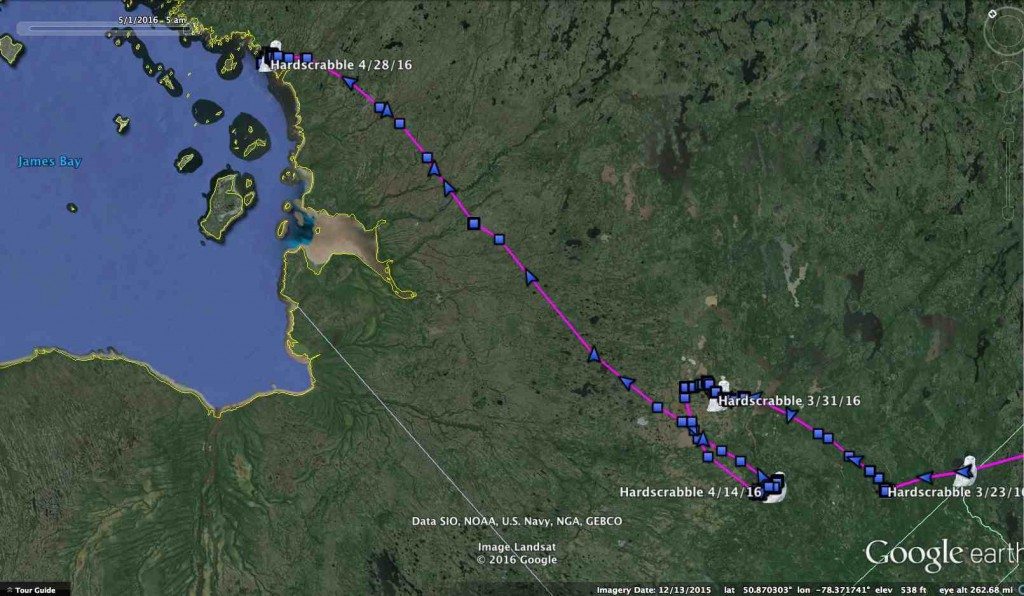 Thanks to burgeoning cell coverage in small bush communities, we got a download from Hardscrabble on the eastern shore of James Bay last week. (©Project SNOWstorm and Google Earth)

Hardscrabble, on the other hand, absolutely delighted us with a download of more than 300 locations on April 28, from the eastern shore of James Bay — a long way from the heart of the Canadian cellular network.

She was a few kilometers north of a Cree village called Kachimumiskwanuch, at the mouth of the Eastmain River, and about 320 km (198 miles) north of her last reported location. What’s more, she made that in one sustained push over the course of about 11 hours the night of April 20-21 — another example of how much ground a snowy can cover when it’s in a hurry.

The new CTT transmitters we were using this winter should be able to communicate with the latest 3G cell towers that are increasingly common in small Native communities, mining towns and remote outposts in the Canadian Arctic and subarctic. That means we may not have to wait until next winter to get data downloads from our newest snowies. (Those birds with older, 2G transmitters will likely not connect again until they come south.) 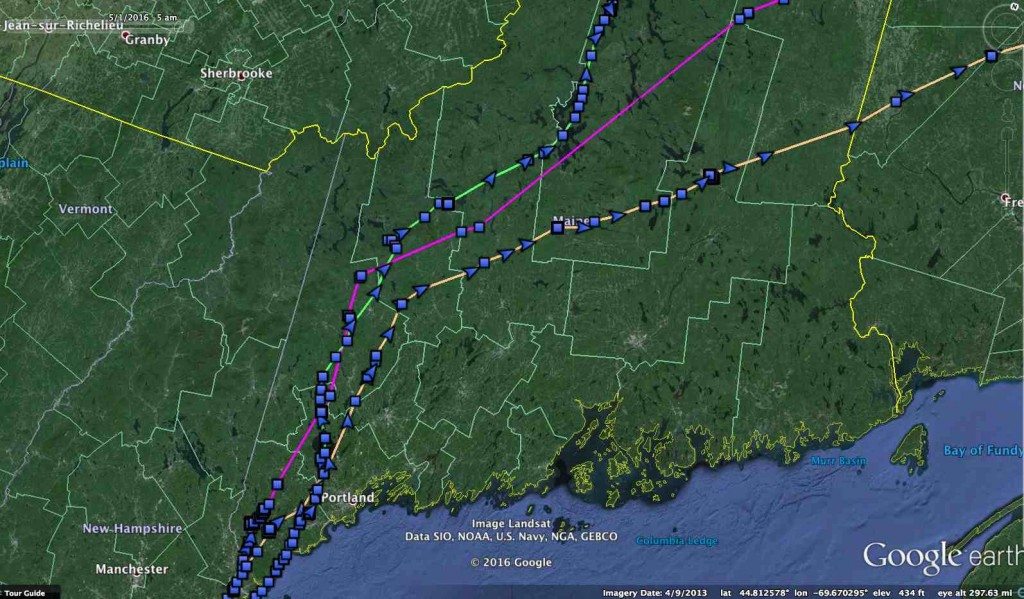 Farther east, Salisbury (whom we’d not heard from for a month), Casco and Brunswick have all made dramatic flights north as well.

The last we’d heard from Salisbury was March 31, when he was near Sanford, Maine. But this morning he sent more than 900 locations from the previous month, showing how he’d flown up through northcentral Maine’s Piscataquis County — among the largest and least-inhabited counties east of the Mississippi. As big as Connecticut, Piscataquis has just 17,000 residents, meaning it still qualifies as “frontier” under the 19th century definition.

On April 22, Salisbury had reached the Gaspé Peninsula in Quebec, and around midnight the night of April 29-30 made a  67 km (42 mile) flight across the Gulf of St. Lawrence to the north shore, where he was this morning in a remote spot southwest of Port-Cartier.

As we suspected, based on photos folks had shared with us, Casco had left the northern Massachusetts coast April 8, and flew north into southern Maine, skirting Sebago Lake, just as Merrimack had done earlier this winter.

From there, she continued north through west-central Maine and then hung a right north of Farmington, moving across the largely empty middle of the state to Millinocket, and finally across New Brunswick to the coast at Bathurst on April 11. There, Casco used the tidal flats and small islets of Bathurst Harbour, where the Nepisiguit River enters Chaleur Bay.

A few days later, Casco followed the southern edge of Chaleur Bay to Lamèque and Miscou islands, then crossed the bay to the tip of the Gaspé Peninsula. After lingering near the towns of Percé and Barachois, she made another overwater crossing, this time 78 km (45 miles) north over the mouth of the Gulf of St. Lawrence to Anticosti Island. Resting for a short while there, she left and crossed the 49 km (30 mile) northern channel of the gulf, and Thursday evening she was just north of the town of Havre-Saint-Pierre, on Pointe-aux-Esquimaux, Quebec, not far below the Labrador border. 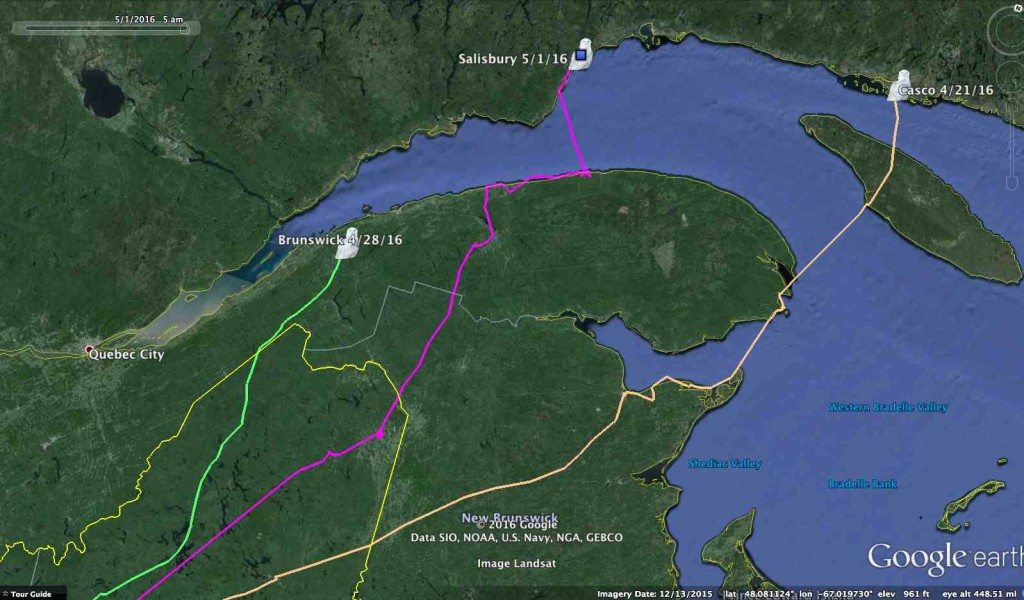 Brunswick, on the other hand, remained in the Isle of Shoals off the New Hampshire/Maine coast until April 22 — the last of our tagged owls to get the northward bug this spring. Reports indicate that she was unruffled by a lot of construction on the hotel facilities on Star Island, though the activity may have been why she later shifted to Appledore Island.

But when she moved, she moved quickly. Lauren Gilpatrick at the Biodiversity Research Institute, which underwrote Brunswick’s transmitter, saw some interesting parallels between Brunswick’s track and common loons, one of BRI’s signature conservation species.

“I love that Brunswick was one of the few who ‘phoned home,’ showing her northward tour of some good lakes in Maine loon country (Long, Sebago, Keoka, Flagstaff, Moosehead, Little East),” Lauren said. “If I’m reading the maps correctly, it even appears she even checked out some small islands in the lakes on her way north. I guess that’s not surprising after her extended stay on the Isles of Shoals. They should map a tourist route of her choices for summer people — she clearly has great taste for scenery.” 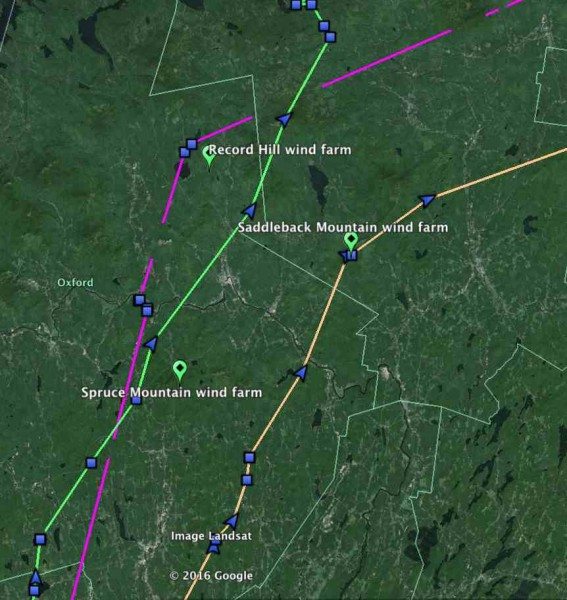 Lauren also noted that both Brunswick and Casco threaded their way through a number of large wind turbine arrays in west-central Maine, both having taken a very similar route through this mountainous area. Casco even stopped for a brief rest on the rocky summit of Saddleback Mountain, where 12 turbines were built in 2014. This morning, when Salisbury checked in, we learned that he had taken the same route through the same high-elevation corridor in early April.

(Incidentally, we’re often asked about the risk to snowy owls from wind farms, especially given the large number built or planned around the Great Lakes — including 37 turbines planned for Amherst Island, where a great many snowy owls winter. The simple fact is, we don’t know, though the data we’re collecting on flight altitude — the first ever for any species of migratory owl — may help answer some of those questions. But we are obviously concerned about the potential impact of large-bladed turbines on migrant owls.)

Brunswick’s travels took her across the border into Quebec on April 27, and the next evening she was just a few kilometers from the Gulf of St. Lawrence, west of Trois-Pistoles, in an area of dense spruce forest checker-boarded with large clearcuts in Les Basques, the regional municipal county.

This coast has one of the longest histories of European occupation in North America; the Île aux Basques just offshore was a way-station for Basque fishermen, crossing the north Atlantic for cod as early as the 16th century. The Basques set up seasonal camps to dry and salt their catch — and like those fisherman, Brunswick will only be there temporarily. The Arctic is calling, and she’ll be on her way again soon.

Baltimore on NPR
Down to the End?