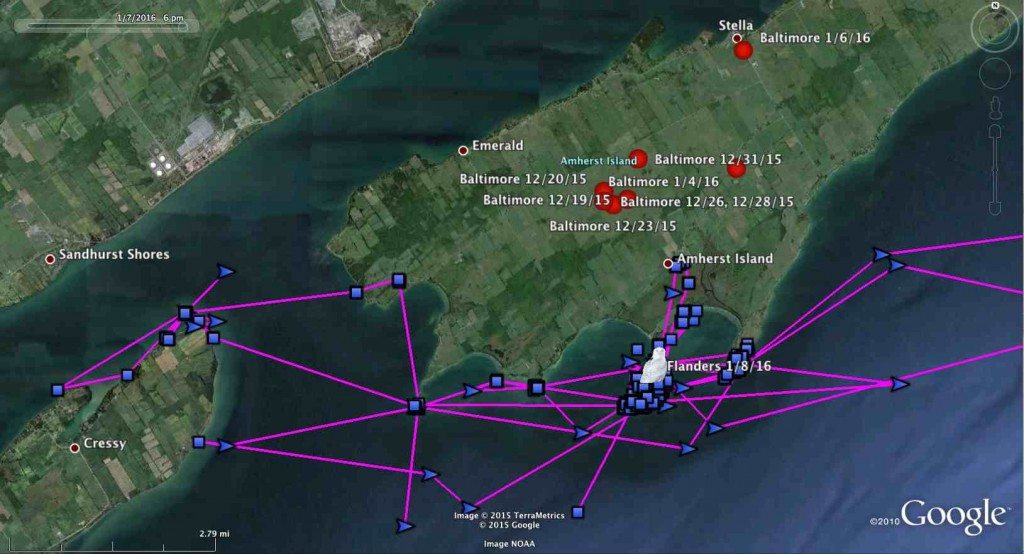 In the month since she was tagged, Flanders has moved back and forth across the northeastern margin of Lake Ontario. Baltimore’s evening locations, on the other hand, are largely confined to the interior of Amherst Island. (Project SNOWstorm and Google Earth)

All three of the snowies we’re actively tracking so far this winter are on islands — and one of them has gone about as far as she can in her particular archipelago.

Flanders and Baltimore remain, as they have been for several weeks, on Amherst Island in eastern Lake Ontario. Baltimore’s transmitter is still sending up backlogged data from his migration north, but we also get a current location for each transmission, usually just after dark, and he’s been holding tight in the immense, open fields at the center of the island, a mostly roadless area 2.5 km (1.5 miles) wide and 6.4 km (4 miles) long.

(More about Baltimore’s summer sojourn when we have a more complete picture of his movements then.)

Flanders remains on her island-next-to-an-island — Nut Island, just off the southern shore of Amherst. Except for a few excursions to the main island, she’s mostly staying on Nut, which is about a kilometer (.6 miles) long and largely treeless except around its perimeter.

But Wampum, who was moved from Boston’s Logan Airport to Cape Cod just before New Year’s, has really fetched up at the end of the line. 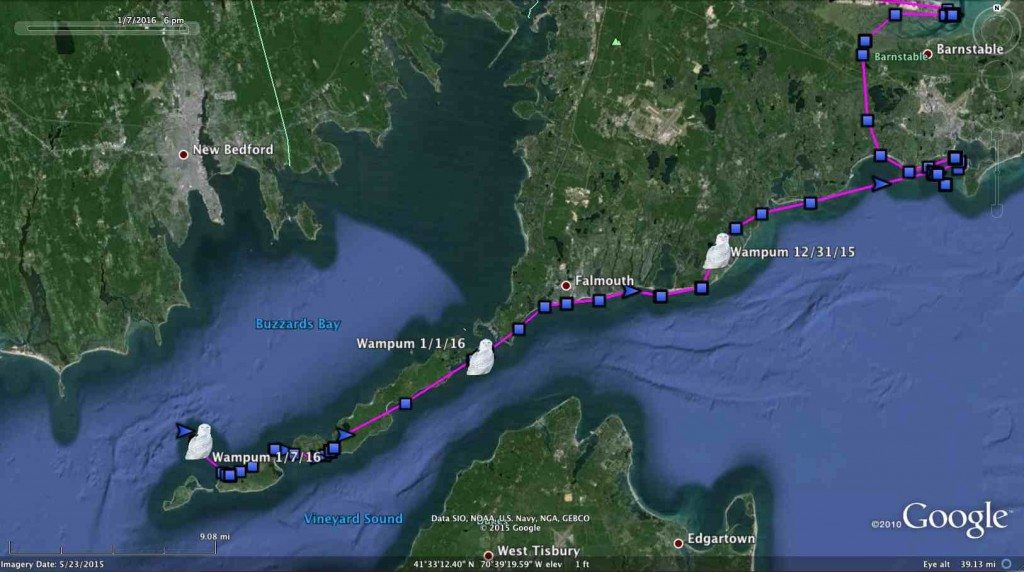 Wampum made a beeline down the length of the Elizabeth Islands in the days following her relocation from Logan Airport. (©Project SNOWstorm and Google Earth)

This adult female moved quickly after her release, flying 22 miles (36 km) southwest along the inner Elizabeth Islands to Nonamessett Island, spending the day there, then continuing another 13 miles (21 km) to the very end of the Elizabeth chain — Penikese Island, which sits in Buzzard’s Bay a mile north of Cuttyhunk. 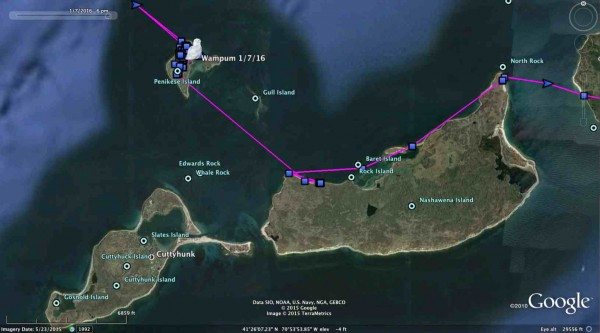 Penikese Island — a former leper colony, and now home to a residential school for struggling teens — is where Wampum has been spending her time. (©Project SNOWstorm and Google Earth)

If she was looking for solitude, she found it. The 76-acre, state-owned island has a convoluted history; in 1905 Massachusetts established a leper colony there, and more recently, the island had a school for troubled boys for 38 years, until closing in 2011. (The school, now treating teens struggling with substance abuse and mental health disorders, reopened in 2013.) Most of the island is maintained as a wildlife preserve, sheltering nesting Leach’s storm-petrels and federally endangered roseate terns, among other species.

Other than one or two flights out over the bay, Wampum has been doing her hunting on the island, which like many of the islands in this part of New England is treeless and grassy, prime habitat for rodents and rabbits. She’s generally staying on the northern half of the island, away from the school and in an area near a small pond.

One thing we’re watching closely is the weather. It’s been a cloudy winter, even by the usual standards of the Great Lakes ands the New England coast, and except for a peek of sun last week we’ve seen very little solar recharge on Flanders’ and Baltimore’s units the past few weeks. Amherst Island is a great place for snowy owls, but not so much for solar panels. Wampum’s unit has seen more sun, fortunately.

The low battery level has been holding back Baltimore’s unit from sending the biggest batches of old data that it could, but Andy McGann and Sheldon Blackshire from CTT pushed through a new duty cycle that should help minimize battery drain and maximize what we get each time his unit connects. Under ideal conditions, we could get the full backlog in four connections — but at least for now, conditions along Lake Ontario’s north shore are going to remain cloudy and challenging.

The good news? His unit is still recording new data as well as pushing out the old stuff, and every day the sun gets higher and the days longer — so even with the stubborn cloud cover, we’re making progress.

The Maine Event
Farewell to a Friend