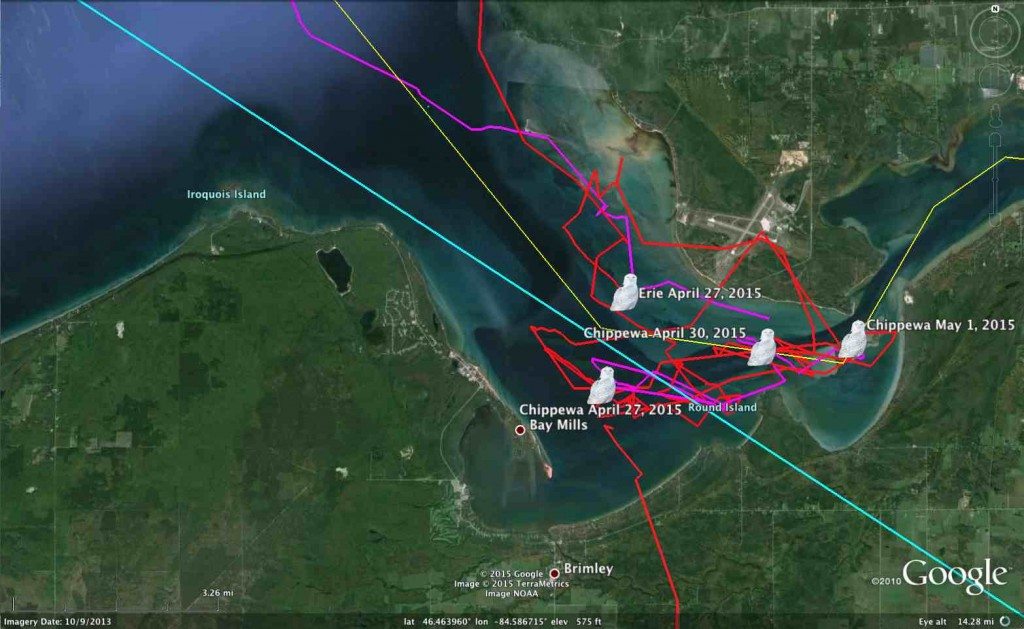 Erie was last detected April 27, and may have moved on, but good old reliable Chippewa hasn’t yet abandoned her post at Sault Ste. Marie. (©Project SNOWstorm and Google Earth)

Thursday and Friday were a one-two punch for our transmitters.

Thursday evening was the regularly scheduled check-in cycle, about 8 p.m. EDT. And the units are also programmed to do an “emergency” check on the first of each month. No matter how thin the reception, regardless of whether there’s enough connectivity to actually transmit data, they’re supposed to send the equivalent of an “I’m here!” signal.

But of the 17 snowy owls we’d been tracking this winter, only one of them checked in — Chippewa, who remained on the frozen entry channel to the Sault Ste. Marie shipping lanes at the extreme eastern end of Lake Superior.

Erie, who had been in almost the same spot on April 27, failed to check in either day. He could have moved offshore — as the satellite image shows, there is still a lot of ice in the eastern lake, and if he was out near the floe margin he may have been out of cell range. 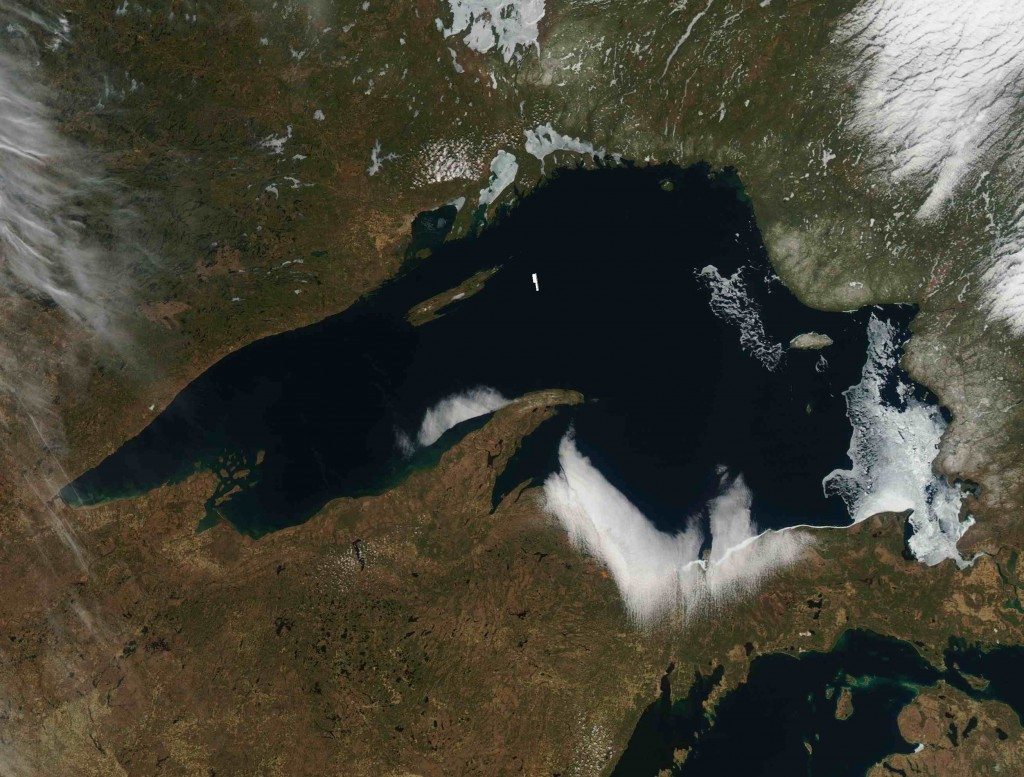 The ice on eastern Lake Superior, though small in proportion to the immense lake, still covers an area 89 miles (140 km) from north to south, and 47 miles (74 km) wide). (MODIS imagery from NOAA Great Lakes CoastWatch)

But it’s really high time for these owls to be making serious tracks for the Arctic, and chances are pretty good that Erie followed the seasons and headed north over the previous three days, moving out of cell range.

The other late-lingering snowies with which we’d still been in contact appear to have also moved out of range. Buckeye, last heard from April 15 on Hubbard Lake in Alcona County, Michigan, has been AWOL ever since. Given that it’s only a 220-mile (354 km) flight from there to the northern edge of the main cell network in Canada, she could easily have done that in a night or two between check-in cycles.

Millcreek and Baltimore, you’ll recall, were already as far north as we could realistically expect to hear from them. Millcreek was last detected April 18 near Cochrane, Ontario, only 238 km (148 miles) south of James Bay, and close to the most northerly line of cell towers in that part of Canada. (There are some scattered towers in the subarctic and Arctic, near large villages, but they’re few and far between.)

Likewise, Baltimore was last heard from April 21 near Val-d’Or, Quebec, a bit farther from James Bay but again about as far north as the regular cell coverage goes in that neck of the woods. The good news is that it’s unlikely he moved west to Malartic and the huge open-pit gold mine.

Of course, last year we kept writing off Oswegatchie, who meandered in and out of cell range in southern Quebec and Ontario until early June, before arriving at that same, ill-fated mine where he met his end. So it’s possible one of these “missing” owls will reappear — but its more likely we won’t hear from them again before next winter.

A Quiet Winter? Hardly!
The View from Paradise