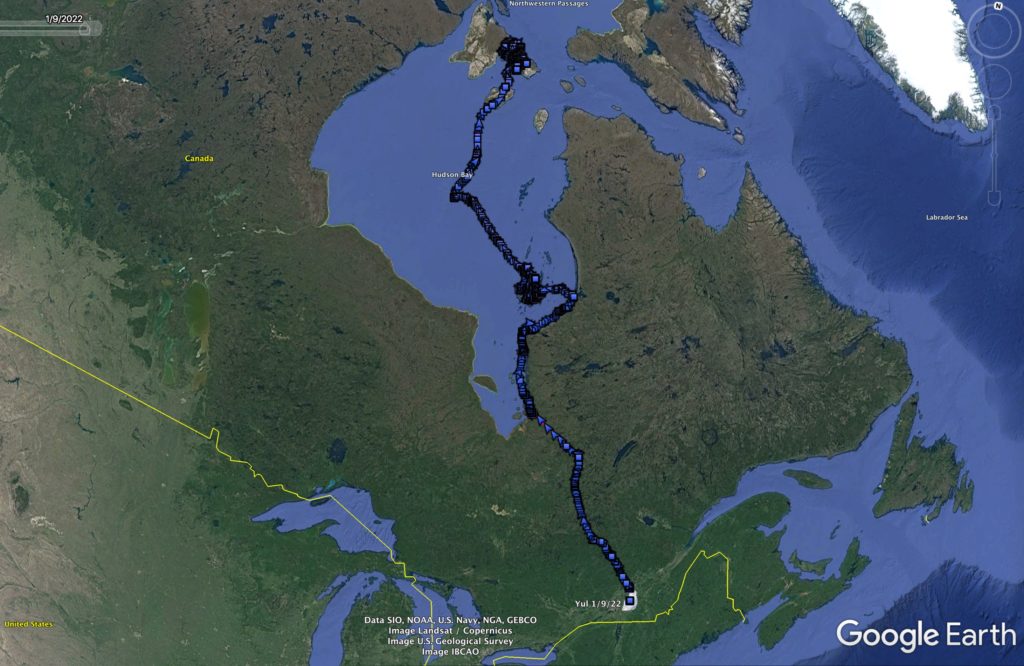 Yul’s northbound route last spring to Southampton Island in the Canadian subarctic, where she remained until at least mid-October. (©Project SNOWstorm and Google Earth)

The last gift of Yuletide came a little late this year for Project SNOWstorm. On Sunday evening, Jan. 9, we were surprised and delighted to see that Yul — an adult female originally captured at the Montréal airport in November 2019, and named for that airport’s international code, YUL — had just made a late return from the North.

What’s more, she was back within 30 km (18 miles) of her 2020-21 winter territory, northeast of Montréal on the agricultural south shore of the St. Lawrence River near the community of Saint-Hugues. 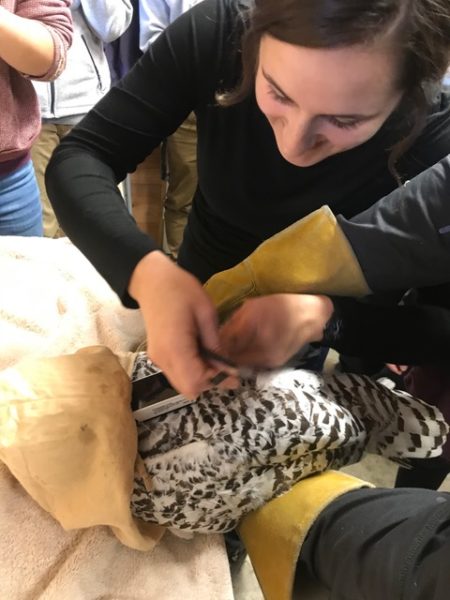 At the moment, we only have part of her story from the previous eight months; the 10,700 or so GPS points she uploaded only went through Oct. 12, 2021, before her battery voltage bottomed out. But we can see that Yul migrated north in mid-April up the east side of James Bay, then made a four-day, 766-km (475-mile) crossing of Hudson Bay from May 25-29. (The bay would have been still largely frozen then, and she was able to rest frequently on the ice.)

Yul spent the summer on Southampton Island, Nunavut, which is where Hochelaga summered last year as well. But unlike that male, whose tracking data strongly suggests he paired up and nested, Yul’s tracks show no signs that she had a nest or chicks. Although she spent the summer in a relatively small area of the island near East Bay, her tracks lack the intense concentration of GPS points at a single location that would signal a nest. This makes her a bit of an outlier, since most of the owls we tracked through last summer appear to have nested.

Hard to say why; she nested the previous summer in the northern Ungava Peninsula. Yul may just not have found a territory with sufficient prey to trigger her to nest, or a mate that suited her.

Because she was still in the subarctic in mid-October, by which point the days are getting very short indeed, it appears her transmitter went into hibernation around that time and didn’t resume logging GPS locations until she was back in the (relatively) sunnier latitude of southern Québec. That likely means we won’t get a southbound track for her, which is a shame, but our main focus has always been on winter movement ecology anyway.

Here’s a quick update on the other owls we’re tracking this winter:

Out west, Stella remains in southern Saskatchewan, and appears to have settled down in in the prairies and fields between the towns of Davidson and Craik. That’s very close to where Pettibone wintered in 2019-20.

Otter, who like Yul returned recently after lingering in the Arctic until mid-winter, downloaded a total of 26,000 GPS points. On Dec. 31 he was in western Québec, just east of Lake Abitibi near Palmarolle. Since then his transmitter has been acting up, rebooting over and over without sending us current data. CTT, which makes the transmitters we use, is trying to troubleshoot the issue and may attempt to push through a firmware update. 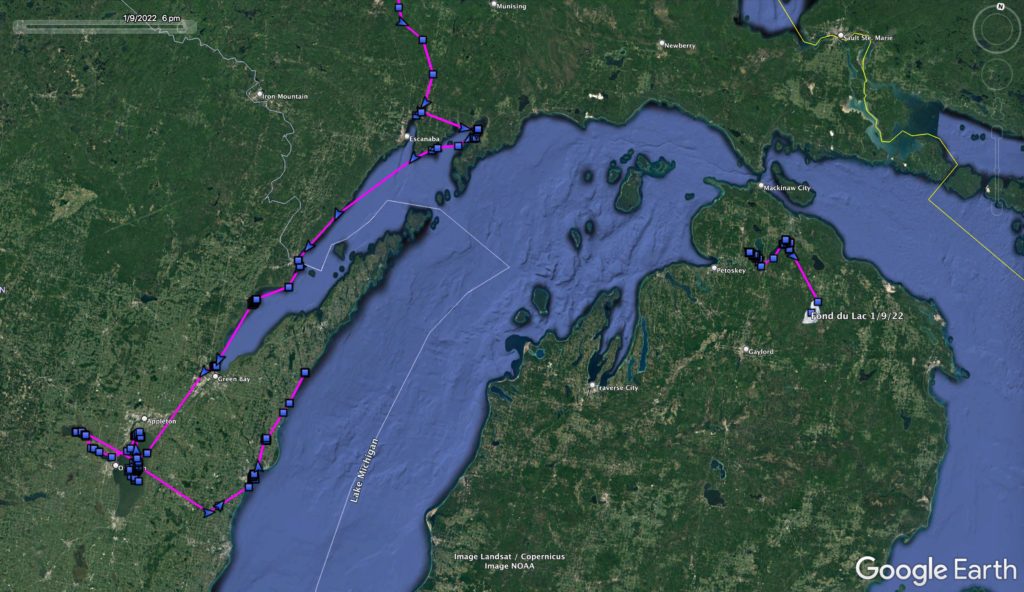 Mind the gap: Because her transmitter went into sleep mode, we don’t have Fond du Lac’s movement data from eastern Wisconsin to northern Michigan. (©Project SNOWstorm and Google Earth)

Fond du Lac’s transmitter took a hit from all the gloomy weather in the upper Midwest and went into hibernation for about two weeks, during which time she moved from eastern Wisconsin near the Kewaunee Peninsula to the upper Lower Peninsula of Michigan — whether across Lake Michigan or around it via the Upper Peninsula, we don’t know. She came back online Jan. 7 and is now in Cheboygan County, MI, just south of the Straits of Mackinaw. 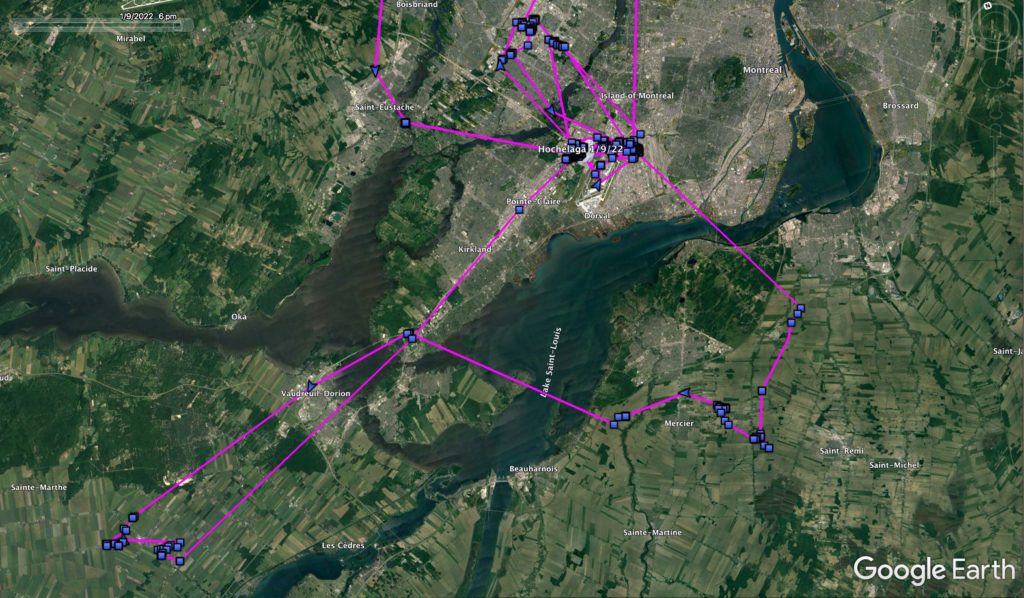 Hochelaga did a little loop into extreme southwestern Québec, then came back to his busy highway territory. (©Project SNOWstorm and Google Earth)

Hochelaga made a quick circuit around Montréal as much as 42 km (26 miles) southwest of the city during the first week of January, but then circled back to the heavily industrialized zone just north of the airport, along busy Autoroute 40. Becca McCabe, who tagged Hochelaga last winter while she was completing her Ph.D. at McGill, is pretty sure she saw Hochelaga in the weeks prior to his capture, hunting this same stretch of highway — in any event, an all-white male that was a ringer for him, so it looks like this is his winter home.

Across the St. Lawrence, Odanak and Nicolet remain where they’ve been for the past month on the south shore of the St. Lawrence — on the perimeter of the Saint-Hubert Longueuil Airport in Odanak’s case (though she made a brief jaunt across the river to Nun’s Island and Pointe-Saint-Charles) while Nicolet remains very close to where she was released last month after being moved from the Montréal airport, north of the Rivière Saint-François, not far from Yul’s 2020-21 territory. 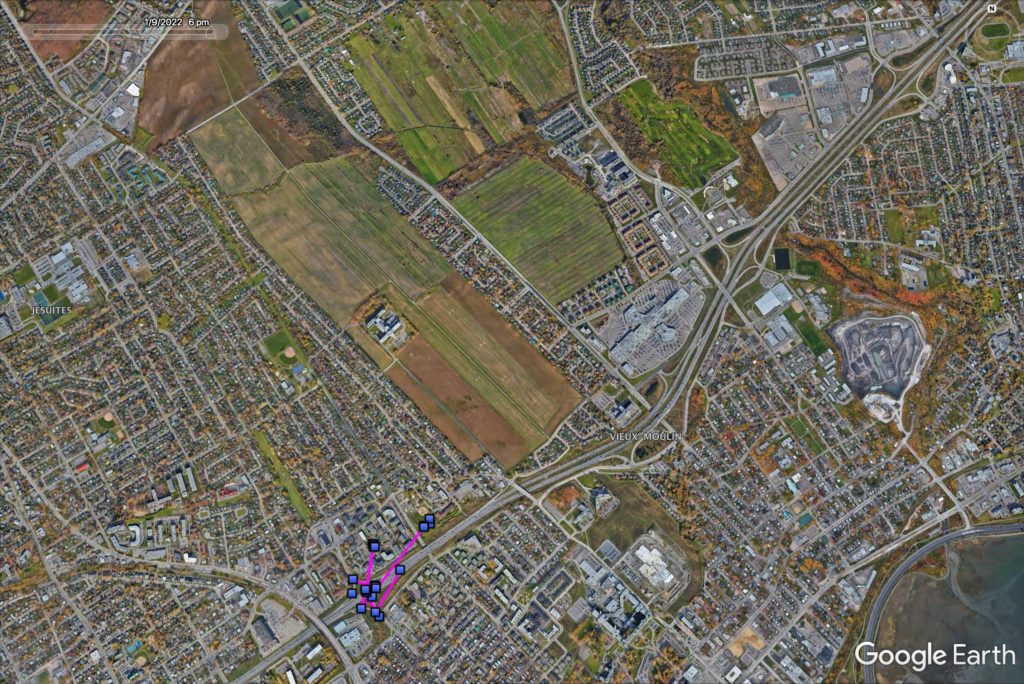 Wells is on familiar ground again, near the hundreds of acres of farmland at a Catholic convent in Québec City. (©Project SNOWstorm and Google Earth)

Down the St. Lawrence 125 km (77 miles), Wells is again wintering close to the 200-acre Sisters of Charity convent in Québec City, where she has spent the past five winters. If Wells kept up with the news, she might be relieved to know that plans to turn this tract of farmland, one of the largest remaining green spaces in the city, into 6,500 homes was shelved in 2020.

We haven’t received data in a few weeks from several other returning owls, including Columbia, Alderbrooke and Amherst. With the days getting ever-so-slowly longer, and solar recharge improving, we hope that will change soon.