One of the unexpected surprises for the SNOWstorm team is who has turned out to be our strongest promoters. 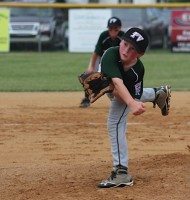 Carl Wagner has been sharing Philly’s journey with friends and classmates.

Carl Wagner is a 9-year-old third grader from Honey Brook, PA. He discovered Operation SNOWstorm with his mom and 2 older brothers. They all got very excited when they learned that Philly’s release site was within 3 miles of their home and that Philly had landed on landmarks in the area that they all knew well.  This picture of Carl was taken at his local little league fields, just a quarter of a mile from one of Philly’s stops atop a farm building at an Amish farm complex as he began his initial descent back into PHL.

But out of the 3 brothers, it was Carl who really latched onto Philly and his travels. So much so that he pulled together a PowerPoint presentation and a SNOWstorm Tracker demo to show his 24 classmates. After he gave his PowerPoint presentation and showed his classmates where Philly had been, the class gave him a standing ovation! Way to go Carl!

And Carl didn’t stop there.  He quickly made plans to give his presentation to the other 7 third grade classrooms in his building. And when he gets done with the third graders, Carl wants to take this to the 9 second grade classrooms, then all the fourth grade classrooms.  It is his intention to educate his peers and get them excited about such a beautiful, majestic species of owl.

Tragically, Philly was killed in a collision with a plane at 7:00am on January 29th at the Philadelphia Airport.

Even though Carl’s mom had prepared him for the possibility of this type of outcome, Carl was devastated by the news. But Carl quickly bounced back driven by the desire to share his presentation with the other 9 classes in his school. And he set a new type of goal for himself; raise money for Project SNOWstorm both to honor Philly and to help the ongoing research. His school told Carl it was okay for him to encourage kids to donate from home to the Project SNOWstorm Indiegogo fundraiser as part of his presentation.

When the SNOWstorm team heard about Carl’s efforts to raise money they thought it was a great idea and came up with some new perks designed to encourage contributions to honor Philly.

The contributor will receive the following perks

Get it now – 1000 perks at this level will be available

The contributor will receive the following perks: