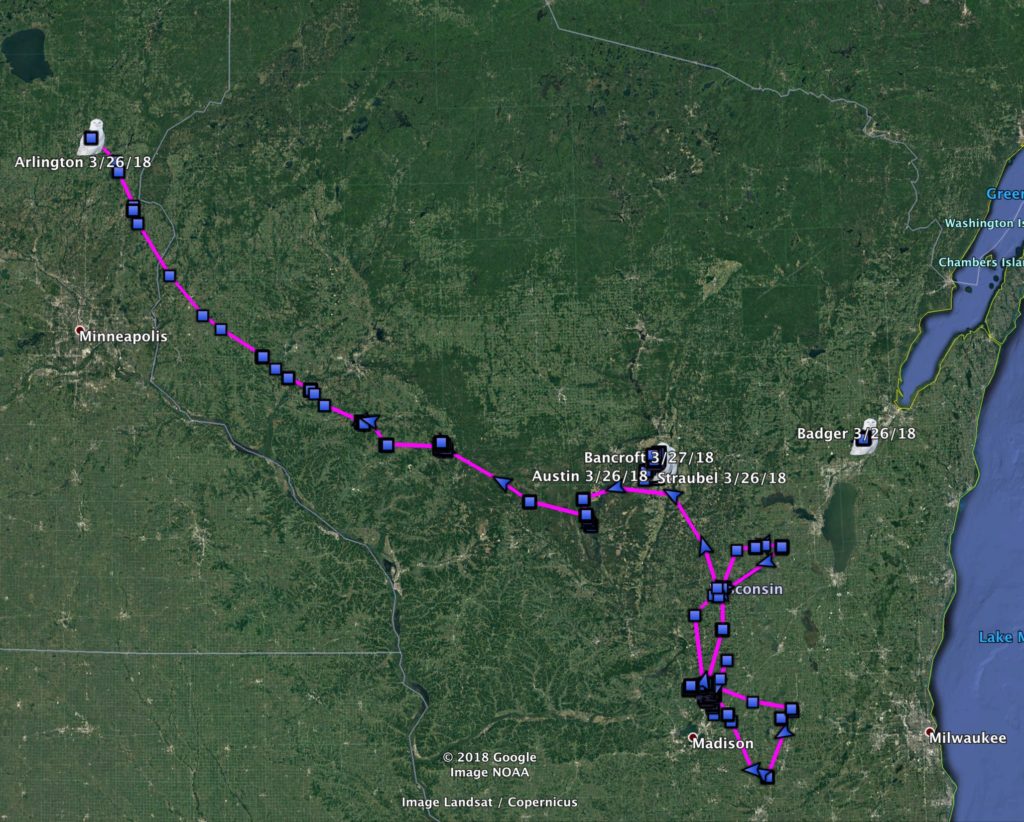 Arlington is making tracks north and west, having moved into eastern Minnesota in the past week. (©Project SNOWstorm and Google Earth)

Arlington isn’t waiting for spring. This juvenile male is making serious tracks to the north — the first of this winter’s class of tagged owls to show more than just some late-winter wanderlust.

In just the past week he’s moved more than 120 miles (200 km) from south of Eu Claire, Wisconsin, northwest into Kanabec County, Minnesota — and more than 260 miles (420 km) from where he was tagged Jan. 4 near his namesake town in southern Wisconsin.

There’s lots of ground to cover this week, so we’ll move from west to east, starting with Pettibone, who checked in for the first time in a few weeks, still on his 10-square mile (25-square-km) territory straddling Stutsman and Kidder counties in North Dakota. That area has spotty cell coverage, which is why we hear from him only irregularly — and likely why we haven’t heard from Ashtabula, who last was just to Pettibone’s northeast, since March 19. 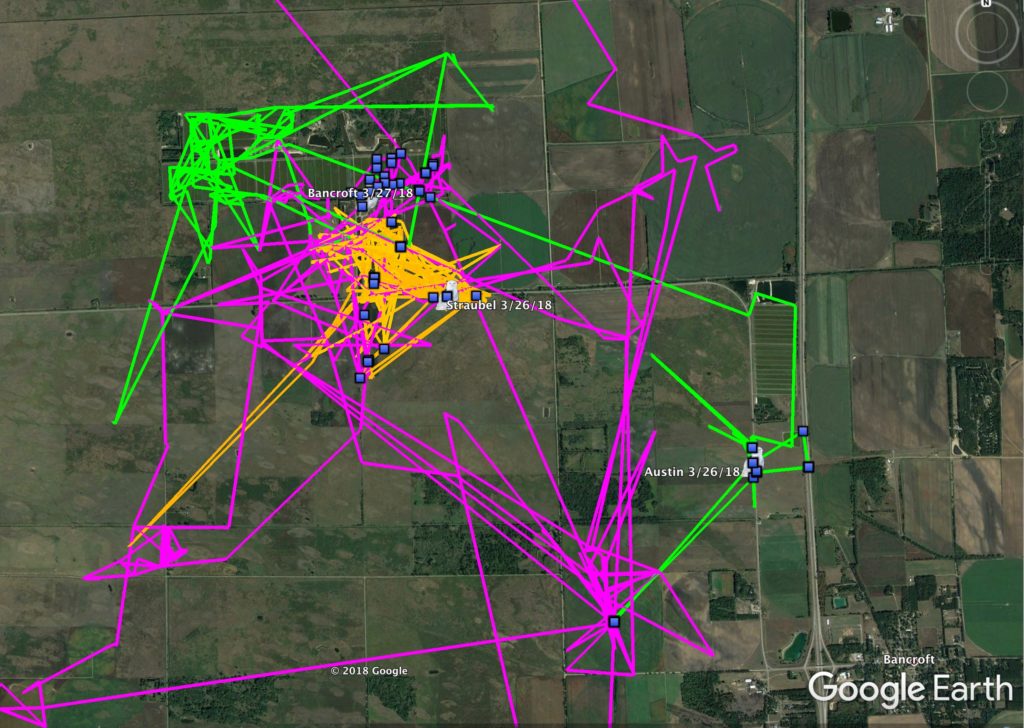 Our Wisconsin trio of Austin, Bancroft and Straubel continue their dance around each other, providing a really rich and fascinating look at how snowies using the same patch of land respond to each other (and likely to other, untagged owls in the same area). All three juveniles are using a patch of the Buena Vista grasslands about 7 square miles (20 square km) in extent, with the larger female Straubel occupying the center and, until recently, the two males keeping to the margins. 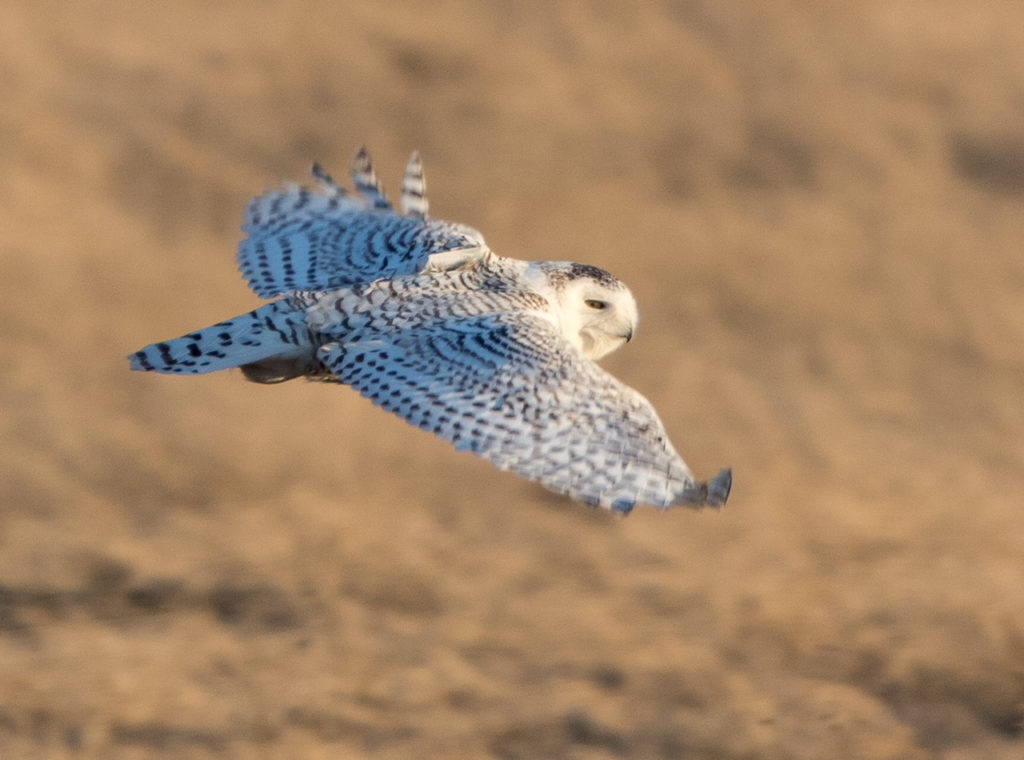 This past week, though, Austin shifted southeast, to another area of commercial cranberry bog, while Bancroft — who had first staked out this territory early in the winter — moved close to Straubel and into what had been Austin’s bailiwick to the northwest. The proximity of Bancroft and Straubel prompted one commenter to ask if the two might be pairing up. Fun as that might be to contemplate, it’s unlikely — snowy owls require a number of years to mature, and both of these birds are less than a year old. There’s also little evidence that snowies pair on the wintering grounds; it seems more typical for adults to pair up once the male has established a territory on the breeding grounds.

Rounding out our Wisconsin owls, Badger remains a homebody on her farmland territory northeast of the town of Freedom, WI. And up in the U.P. of Michigan, there have been no changes for Pickford and Pennington — this juvenile female and adult male remain where they’ve been all winter, in farmland about 50 miles (81 km) south of Sault Ste. Marie. No word since Feb. 28 from Gichigami, when she was out on Lake Superior’s ice. 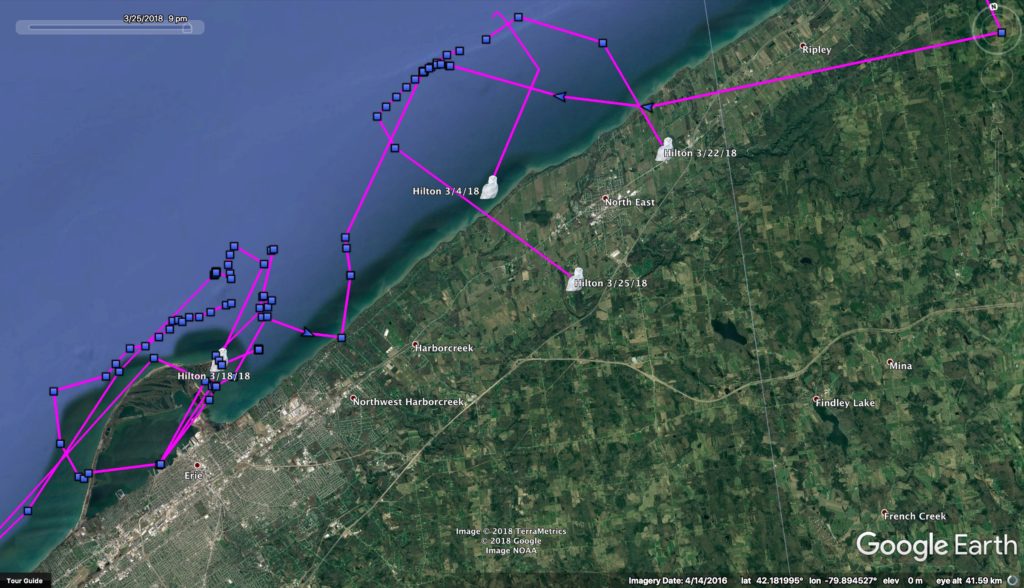 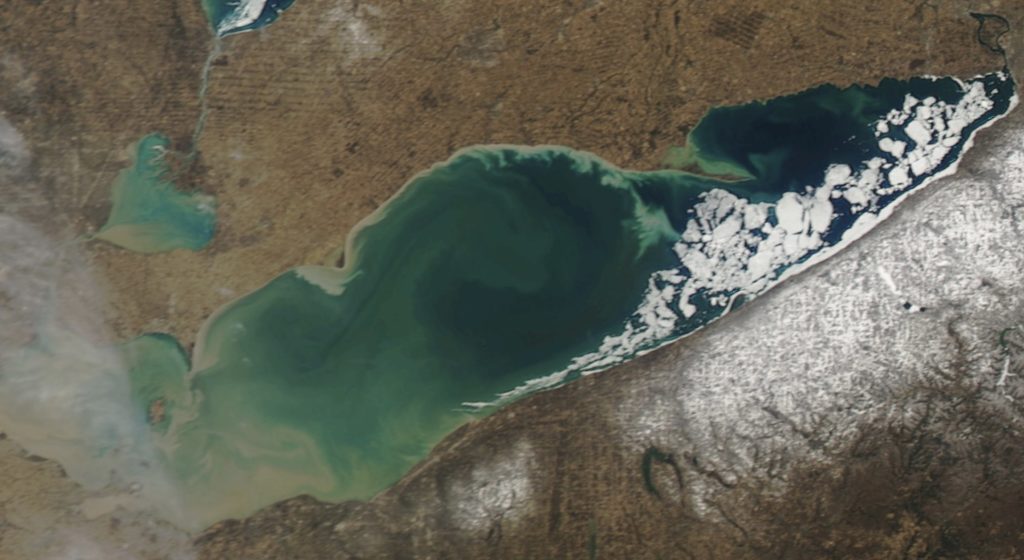 …which is understandable when you see the small, fairly broken area of ice still remaining on the eastern end of Lake Erie. (NOAA CoastWatch imagery)

We have been hearing only intermittently from Sterling, whose transmitter has been struggling to maintain power; he’s likely one of those birds that likes to preen the unit way down into his back feathers. But he remains near Holland and Zeeland, MI, on the east shore of Lake Michigan.  Meanwhile on Lake Erie, the rapidly disappearing ice there has pushed Hilton onto land with increasing frequency, and lately she’s been on and off the lake between Presque Isle and the town of Northeast, Pennsylvania, and farmland between Ripley and Westfield, New York. 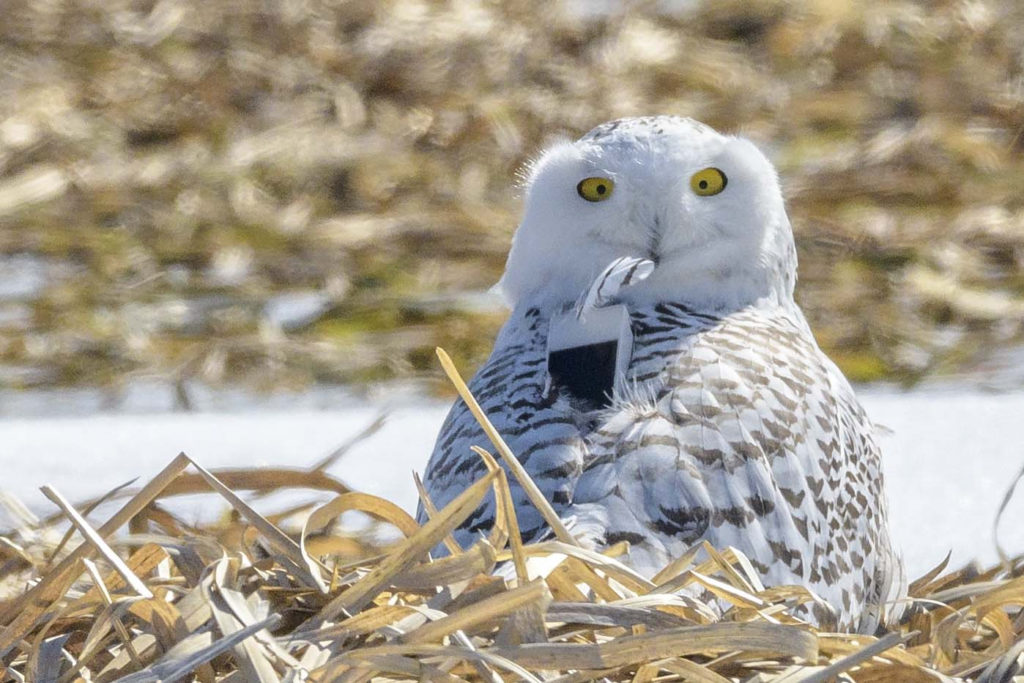 Chased off Lake Ontario now that most of the ice is gone, Stella has been spending her time along the south shore of Amherst Island. (©Donald Munro)

On Amherst Island, Stella and Emerald are still holding tight to their routines. Stella has lost all the remaining ice on the Lake Ontario side of the island, and now spends all her time on shore, where she’s a favorite with photographers and visiting birders. Emerald has taken advantage of the limited ice remaining on the channel to the mainland, and spent much of the day March 27 out there.

With all the turbine construction this winter, Amherst has been a noisy place, but both it and neighboring Wolfe Island have seen large influxes of owls in the past week or two — possibly from early migration, possibly owls chased off the melting ice onto land. Local photographer Dale MacNair reported finding 21 owls on Amherst this week, and our friends Daniel and Patricia Lafortune counted an astounding 40 snowies on Amherst last weekend. 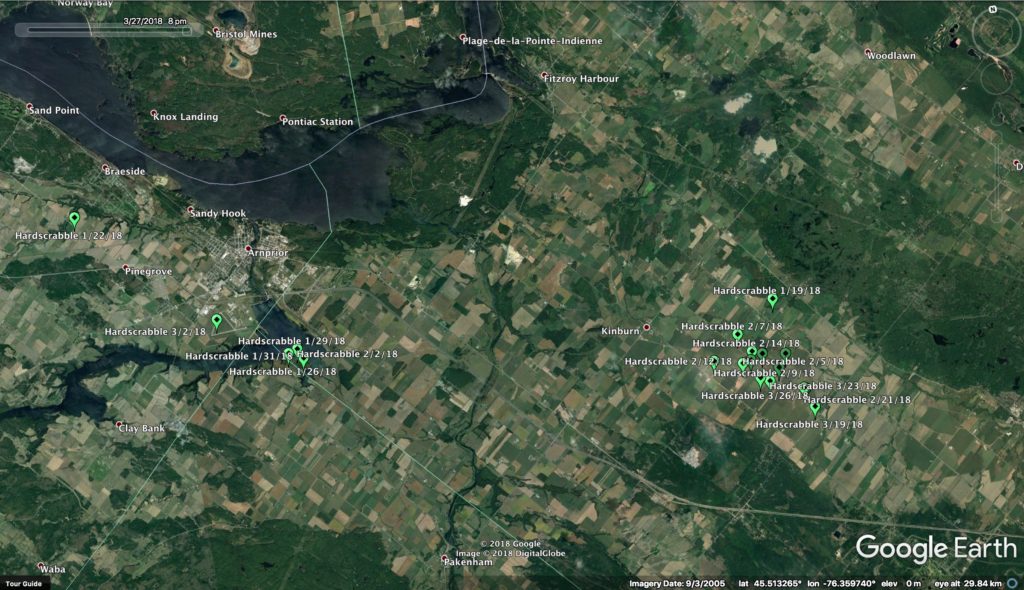 Having shifted to his 2016-17 territory near Cobden, ON, for a few days, Hardscrabble is back where he’d been most of the winter, near Kinburn, ON, in the Ottawa River valley. As we’ve noted previously, his transmitter battery is unable to maintain a charge when trying to transmit backlogged data, which we get in dribs and drabs every time he connects. So while his map data only goes up to May 2017, we’re at least able to get GPS fixes on his current location each time he connects, which has allowed us to build an almost-daily map of his evening locations, and thus his basic activity area. (You’ll recall that we’ve tried a number of times to retrap Hardscrabble and remove the faulty unit, as we did earlier this winter with Baltimore, but so far we’ve had no success.)

Farther east along the St. Lawrence, Chickatawbut remains where she’s been all winter, near the town of Louiseville, Quebec, while Wells remains in the thick of things in Quebec City, roosting on a large shopping mall, hunting the margins and medians of several very busy highways, and occasionally escaping the hubbub out on the river (presumably on floating ice).

Speaking of urban owls, Logan continues to hunt Boston’s outer reaches in Revere and Chelsea, just across the Mystic River from the downtown. Norman Smith, who tagged her and moved her from Logan Airport, is concerned about what she might be eating in such an urban environment, since he knows of a number of snowy owls in the Boston area that suffered from rodenticide exposure this winter, having eaten poisoned rodents. 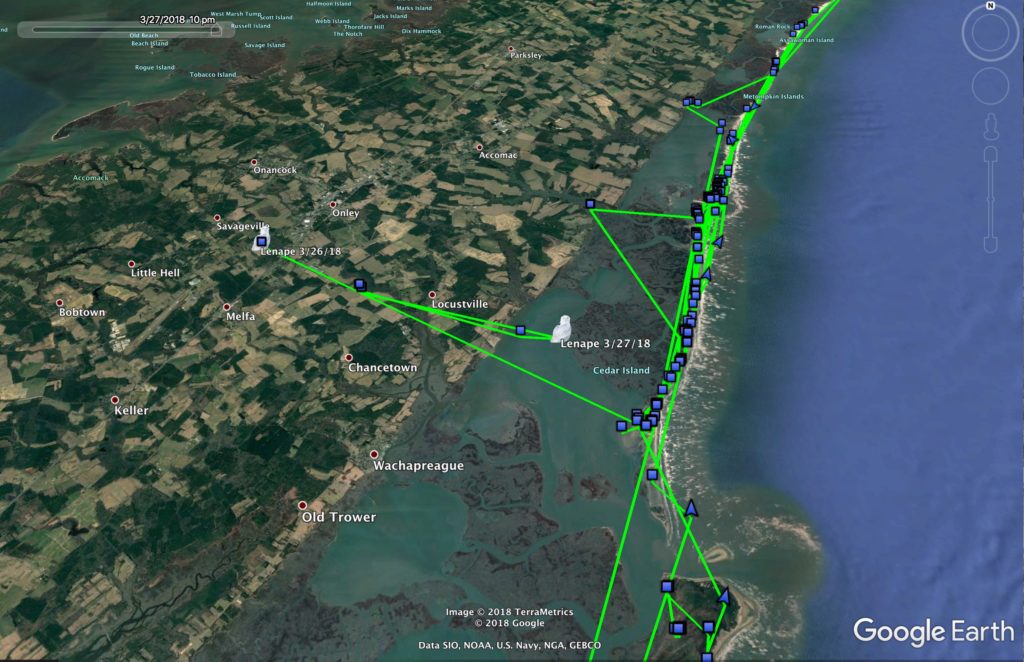 Lenape has been spending most of his time (save for a quick detour inland) on the secluded and protected barrier islands of the Virginia Coast Reserve. (©Project SNOWstorm and Google Earth)

Moving down the coast, Sinepuxent is still using the salt marshes just inland of Atlantic City, while Island Beach continues to bop around south Jersey, from Stone Harbor and Avalon down to Wildwood. Finally, Lenape seems to have found some peace and quiet at long last on the Virginia barrier islands on the Eastern Shore’s Atlantic coast, most of which are part of the Nature Conservancy’s Virginia Coast Reserve. Unlike some of the beaches farther north, which are accessible by vehicle and where snowy owls are continually flushed by overly enthusiastic (or simply careless) humans, Lenape has been able to rest out on these out-of-the-way islands where people are fairly rare visitors.

More Heading North
Help Us Head to the Arctic This Summer!

7 Comments on “Let the Race Begin”