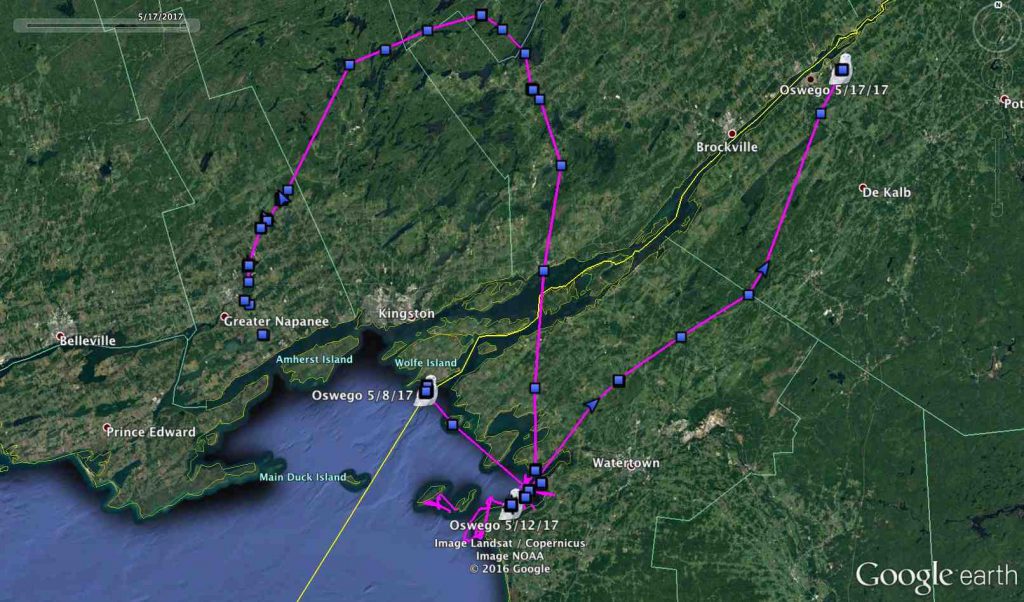 Heading north for real, or another false start? Oswego’s on the move — again. (©Project SNOWstorm and Google Earth)

Here in the Northeast, after a wet and cold start to May the weather suddenly feels as though it’s been borrowed from summer — yet one of the owls of winter is still hanging around. The question, though, is for how much longer.

Oswego, the young female tagged in January by Tom McDonald in Oswego, New York, is the only SNOWstorm snowy that’s still on the grid. After spending much of March and April at the eastern end of Lake Ontario, especially using a couple of small islands (Bass, Gull and Association islands) near Sackets Harbor, she started moving north at the beginning of May. But as we noted in our last update, she did a big loop through southern Ontario, and by May 10 she was back on Bass Island.

When Oswego checked in on May 12, she was flitting between the islands, which have a lot to offer (including nesting colonial waterbirds on Gull Island). “I have to admit, Association Island had a lot of tasty food items available for our island-hopping owl,” Tom reported after checking it out. “What really surprises me is why she left to begin with.” 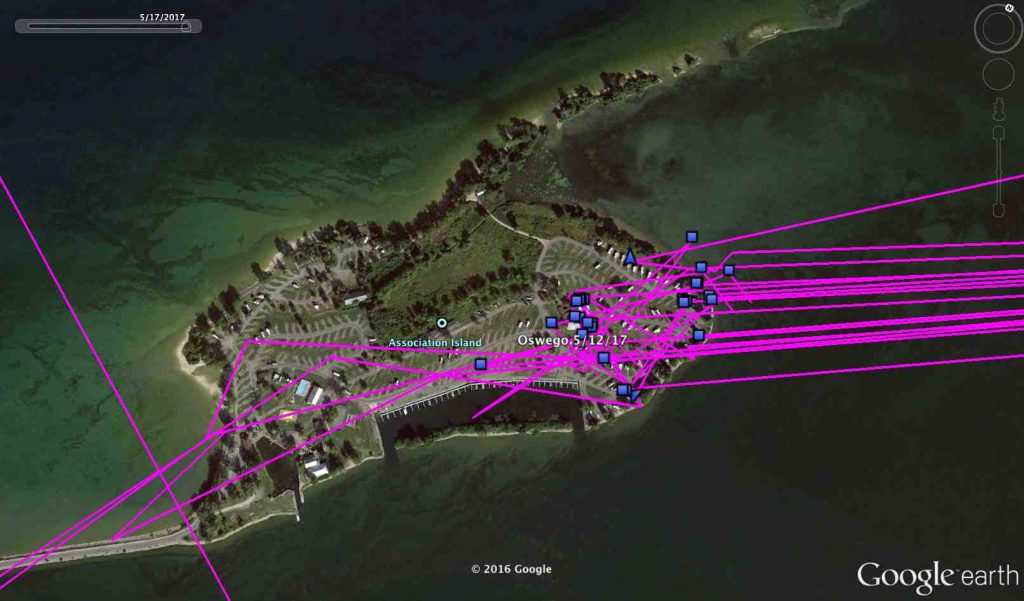 One camper who doesn’t need an electrical or water hook-up; Oswego on Association Island. (©Project SNOWstorm and Google Earth)

But Association Island, which is connected to the mainland by a causeway, is largely occupied by a big commercial campground. “I would imagine that, once the campers start to pile in there, Oswego may not stay around too long,” Tom predicted.

And he may be right. Just before daybreak on Tuesday, Oswego left Bass Island and started flying northeast, skirting just south of the Thousand Islands area on the St. Lawrence. By Wednesday morning she arrived outside Ogdensburg, NY — the town where Tom tagged Oswegatchie, one of our first SNOWstorm owls, in 2014.

Is this another false start, or the beginning of Oswego’s actual northward migration? It’s hard to say; as we’ve noted before she’s a juvenile and thus is too young to have a hormone-enhanced drive to get back to the breeding grounds and nest.

But it is getting awfully late. Oswego’s not the only snowy owl still south of the Canadian border, but there sure aren’t many others. I’m aware of an owl in northern Pennsylvania that continued through at least the end of last week, and another that was stirring up trouble on one of the seabird nesting islands on the Maine coast. Reports on eBird show only three owls in southern Ontario, one on Nantucket Island in Massachusetts and one in Saskatchewan — and except for the Saskatchewan bird, none of those observations were more recent than the first few days of the month.

So Oswego is a real outlier. It’s time for her to be heading north, however belatedly…and maybe this taste of summer will finally do it.