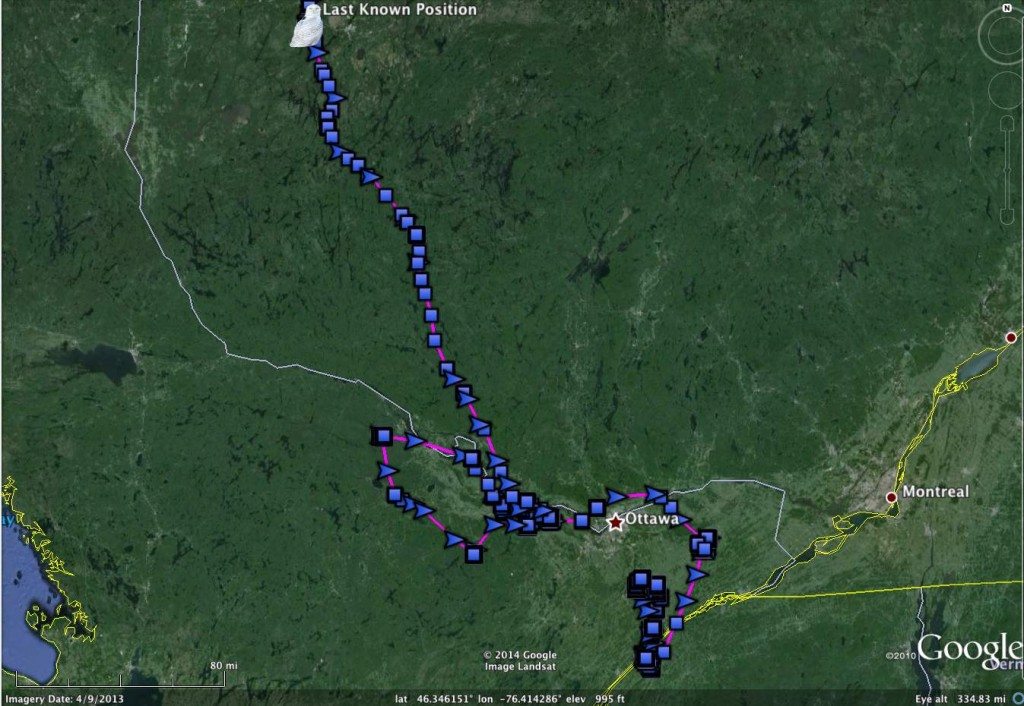 Oswegatchie’s movements from his tagging in early March, until his demise in Quebec. (©Project SNOWstorm and Google Earth)

The last time we heard from Oswegatchie — the only snowy owl from our 2013-14 cadre that was still in cell range — was June 16, when he was hanging around the huge Mine Canadian open-pit gold mine at Malartic, in western Quebec, where he’d been since the beginning of the month.

After he missed the next few check-in nights, we hoped it meant he’d finally moved north, out of cellular range. As we mentioned at the time, a short flight of just 30 or 40 km (18-25 miles) would have put him past the last GSM cell towers.

Unfortunately, that wasn’t the case. On July 18, Oswegatchie’s transmitter unexpectedly dialed in and sent us more than 1,200 GPS locations stored over the previous month. Looking at the data, we could see that he’d remained at the enormous mine, moving around the site much as he’d been doing since he arrived there June 3.

But shortly after daybreak on June 26, his signal became stationary, and thereafter, all the hundreds of locations were from the same spot, near a large water treatment plant at the southwest of the mine property. 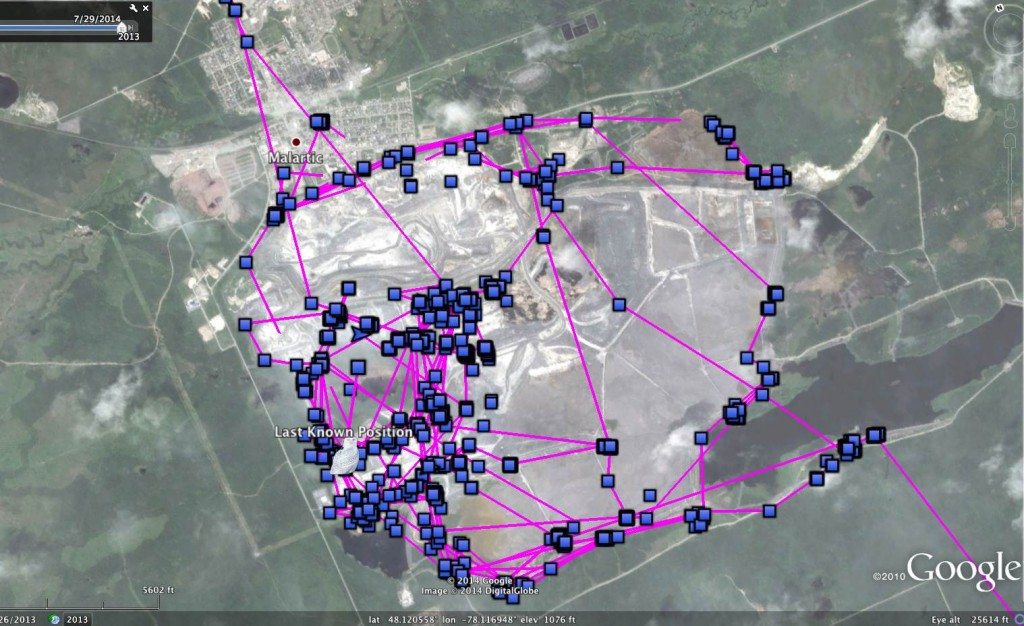 Oswegatchie’s movements at the Mine Canadian Malartic site in western Quebec. (©Project SNOWstorm and Google Earth)

We were hoping that somehow his transmitter had come off, but yesterday the mine’s environment department, using the GPS coordinates we sent them, were able to find Oswegatchie’s body, lying on the ground in an open area among stored construction materials, snowplows and other equipment.

He was on his belly, which meant that the transmitter’s solar panel was receiving enough sunlight to maintain a very healthy charge. I suspect the lack of a transmission for almost a month had more to do with dicey cell reception, especially with him lying on the ground amid a lot of large metal objects.

The mine office has his remains in cold storage, and we’re trying to arrange for a necropsy to determine what killed him. It could have been anything from a collision (he was spending a lot of time beside one of the main roads on the mine) to toxins, or even something unrelated to the site, like a respiratory fungal infection like aspergillosis, to which northern raptors are susceptible when in more southern climes.

They will also ship back the transmitter, which after a check-up at CTT should be good to deploy again next winter on a new owl — a small consolation for the loss of a bird from which we learned a great deal, and will miss. From the time Tom McDonald banded him in Ogdensburg, NY, at the beginning of March, he was a fascinating owl to follow — at first hanging around the local high school, then moving along the Ottawa River valley and into the edge of Algonquin Provincial Park, before heading north to Lac Malartic and the nearby mine in early June.

Why didn’t he head all the way back north? A few snowies always summer in the south after a big irruption, and there were still three or four in Maine, New York and southern Ontario earlier this month, though none with GPS tags. Because snowy owls apparently don’t breed until they are at least two years old, there’s no rush to get back to the Arctic — and by early summer the urge to migrate north at all, which is controlled by hormones that are, in turn, produced in response to the changing length of the day, may ebb away.

Whatever the reason, we’re sorry we lost him. Particular thanks go to Mélanie Benoit with Mine Canadian’s environment department, and to SNOWstorm collaborator Jean-François Therrien at Hawk Mountain Sanctuary, who coordinated the recovery.

And in the meantime, we’re continuing to work on necropsies and sampling many of the snowies that were found dead last winter, while making plans for a fresh round of GPS tagging this coming winter, when we expect a more normal number of mostly adult snowies to come south — hopefully including some of our tagged birds. We’ll keep you posted.