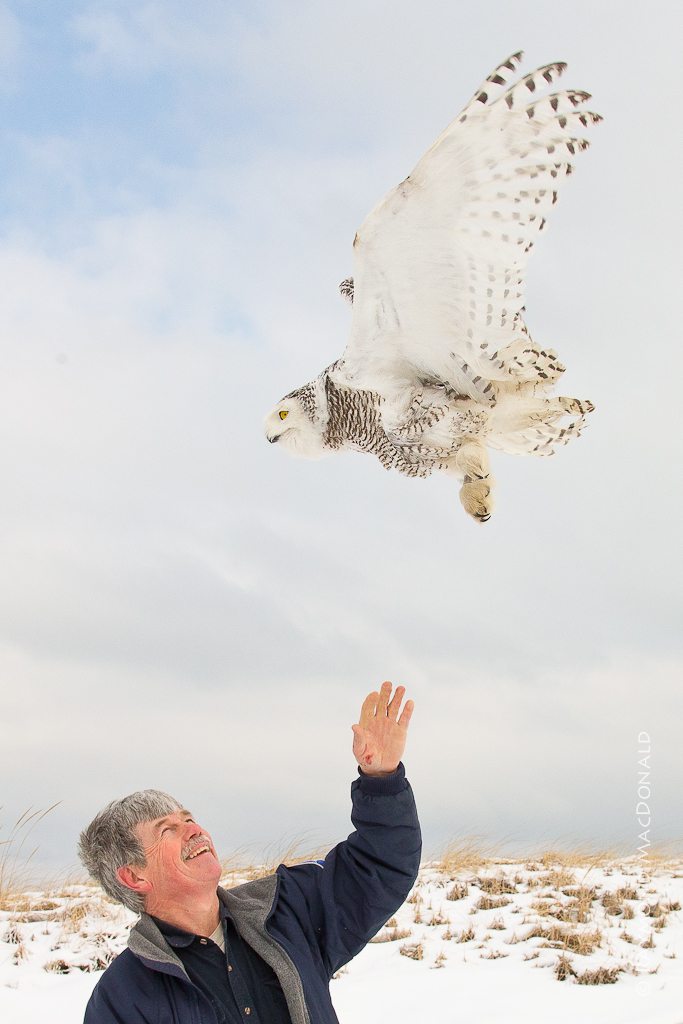 It was an email we never wanted to get.

Sunday night Dr. Rob Bierregaard from Drexel University and the Academy of Natural Sciences — who has been studying ospreys on Martha’s Vineyard in Massachusetts for years — emailed us to say that one of his colleagues had found a dead snowy owl along the beach there earlier in the day, a bird that was wearing one of our transmitters.

It was Sandy Neck, an immature female snowy owl that Norman Smith had relocated from Logan Airport in Boston on Feb. 5, and released at Sandy Neck beach on Cape Cod wearing a GPS/GSM transmitter.

After several weeks of moving along the Cape Cod Bay shore, she crossed the Cape Feb. 24 to its south side. Over the next two weeks she moved back and forth between the mainland, Naushon Island and Martha’s Vineyard several times, before settling in on the eastern side of the Vineyard. She often hunted at night over the ocean off Edgartown Harbor, spending her days along edge of Cow Bay and Cape Pogue on nearby Chappaquiddick Island.

We were watching anxiously to see how she fared during the tremendous snowstorm that lashed Cape Cod last week. On Wednesday, March 26, Martha’s Vineyard was under a blizzard warning, while Nantucket, a bit farther offshore, recorded hurricane-force winds of at least 83 mph. (Some offshore buoys farther north in Maine recorded winds of up to 107 mph, and 40- to 50-foot seas.)

Thursday evening Sandy Neck’s transmitter checked in, and at 8 p.m. EDT — the last location in that transmission — she was at the end of the Oak Bluffs jetty, a perch she’d used a number of times in the past. It appeared that she had made it through the storm just fine.

Instead, she somehow ended up in the ocean, since she was sodden and covered in sand when she was found Sunday, just below the tide line. A preliminary examination by Gus Ben David, who has more than 50 years of raptor experience on the Vineyard, suggests she was in generally excellent shape, still plump and with good fat reserves.

I talked with Norman yesterday, and his first thought is that she might have gotten caught by one of the huge waves that pounded Cape Cod and the islands in the wake of the storm — in fact, a jetty is just about the worst place for a bird to perch in such conditions, because she might not have reacted quickly enough to an especially big wave.

But at this point we’re not sure what happened. Sandy Neck is being transferred to the world-famous veterinary center at Tufts University in Boston, where they will perform a necropsy to try to determine the cause of death. The transmitter is intact, and we’re hoping that with a recharge we can get the remaining data since March 27 — and if it’s functioning normally, Norman may be able to place it on another owl this winter, since there are still many in eastern Massachusetts.

This is obviously bad news, but not entirely unexpected; we were prepared this winter for some losses. Almost all of the snowy owls in this year’s irruption are young birds, making their first migration, and it’s a dangerous period in their lives. While we’ve mostly been concerned about artificial dangers like cars or planes (such as the one that killed Philly in January), this is a reminder that young raptors also face a tough — and sometimes fatal — learning curve from natural hazards, too.

We’ll update everyone when we have more news, obviously.