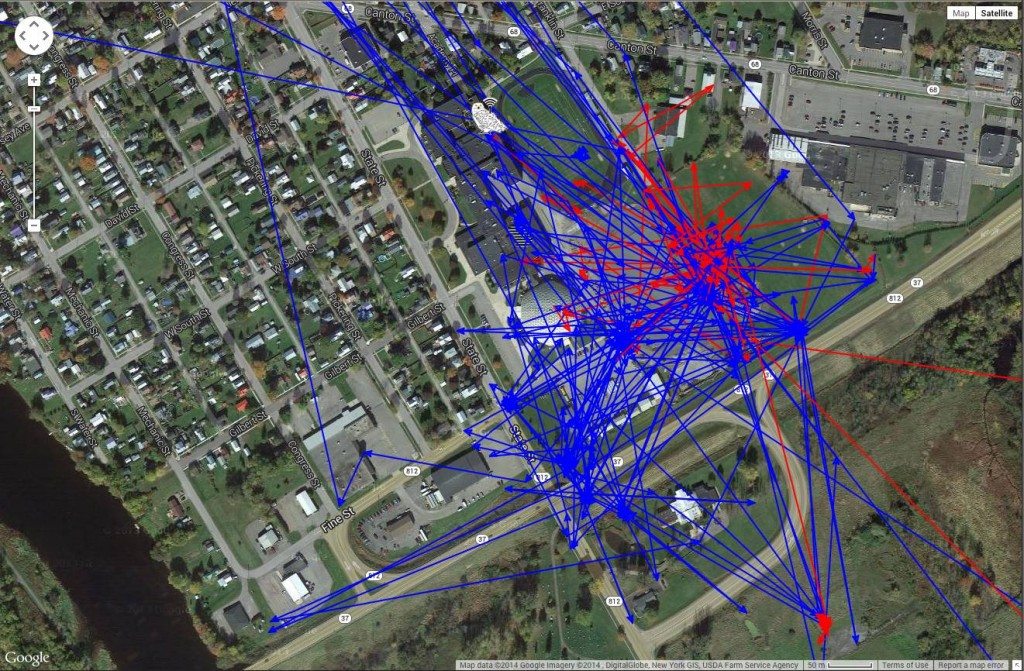 The last few updates we’ve been focusing on the owls that are moving the most, so I thought I’d start today’s update, based on our March 27 transmissions, with the snowy that is moving the least — Oswegatchie, in upstate New York along the St. Lawrence River.

Since he was tagged March 8, he has barely stirred from the town of Ogdensburg. A couple of weeks ago he made one short hop of about 10 miles across the river into Canada, spent a day and came back. Since then, Oswegatchie has spent almost all of his time in town, especially near the Ogdensburg Free Academy, the town’s high school with its locally famous Golden Dome arena, on the huge, rounded roof of which he frequently perches.

This time he made a short sojourn outside of town to the local airport — always a worrying behavior, given how badly planes and owls mix — but then he headed back to the high school area.

Speaking of stay-at-homes, Plum continued to hang close to the Marblehead Peninsula and Salem, Mass., area, including some of the offshore islands and ledges like Great Haste Island (she hasn’t returned to Satan Rock — an appropriate name, given Salem’s witch-trial past — since stopping there March 19).

Probably because of a cold, northerly airflow during the period, we didn’t see many signs of significant migration this time. After making a quick flight across southern New England, Century lingered in eastern New York, moving about 25 miles between Saratoga Lake and Great Sacandaga Lake, where it spent two days before heading back to Saratoga.

In both cases, the owl was using the frozen lakes for resting and hunting, and its commuting flights between them were fairly low-elevation — but fast. Century doesn’t mess around; even her flights up and down Great Sacandaga averaged about 20 knots (23 mph — the transmitter record flight speed in knots), which is much faster than the usual 6-10 knot speed we see in local flights. 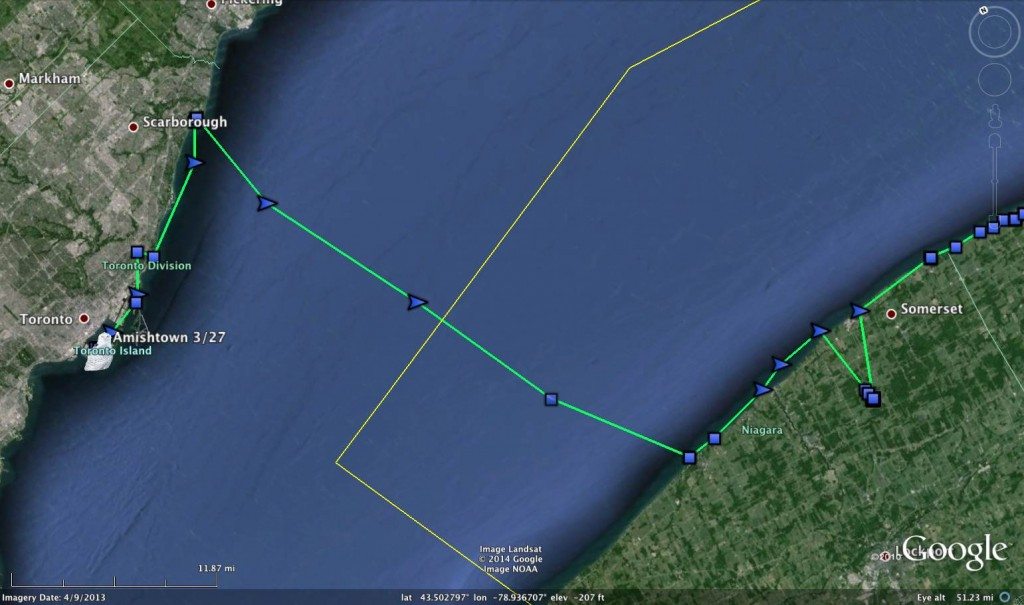 One owl that did make a marked northward flight was Amishtown. Having stopped west of Rochester in Braddock and Cranberry’s old stomping ground, he flew across the western end of Lake Ontario, making the 35-mile trip in about two hours, with at least one rest stop along the way on ice. By dusk on the evening of the 27th he was on Toronto Island, just offshore of Toronto proper.

Wiconisco remained in Wyoming County, New York, about 30 miles east of Buffalo, where he’s been since making a rapid flight from central Pennsylvania.

The most active owl in this period was Womelsdorf, who flew 122 miles around Lake Erie, from east of Long Point, south almost to Presque Isle, then across the lake to just a few miles from the Ontario shore near Port Stanley. It’s a very similar track to one made by Millcreek a couple of weeks ago — but that owl is now east of Long Point. 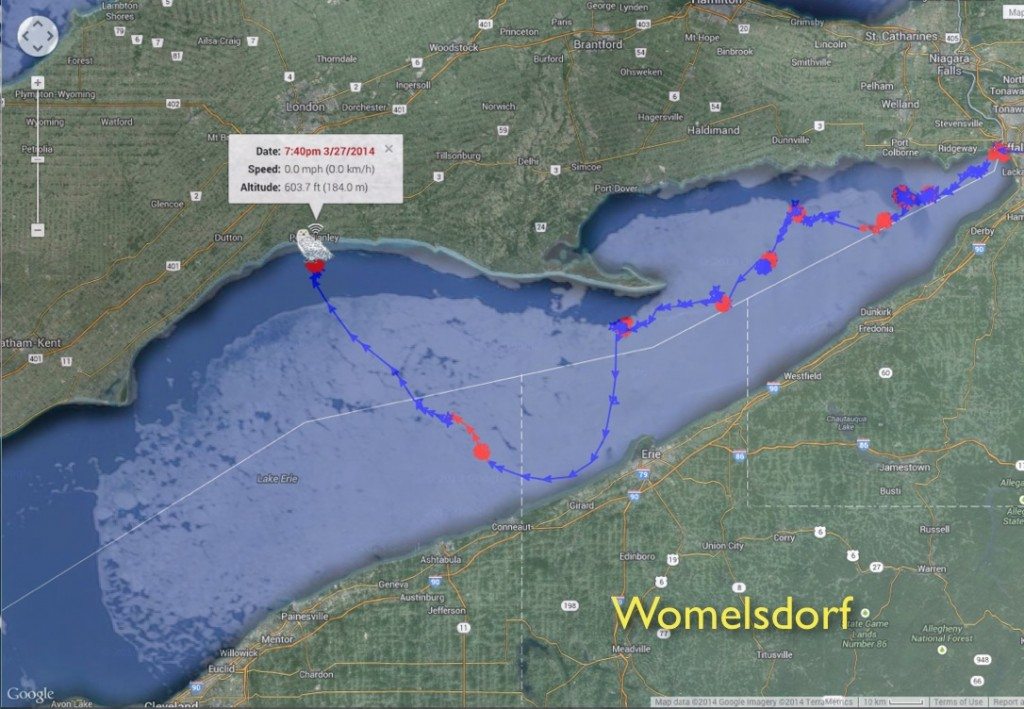 I’ve overlayed the most recent satellite image (March 30) of ice on Lake Erie with the tracks for both of these owls, and the results are fascinating — especially the way Womelsdorf (above) moved several times to the ice edge to hang out during the day. The pattern is less obvious with Millcreek (below), but remember his on-ice track spans more than a month, and the ice conditions (especially the location of cracks) has changed repeatedly because of prevailing winds during that period. 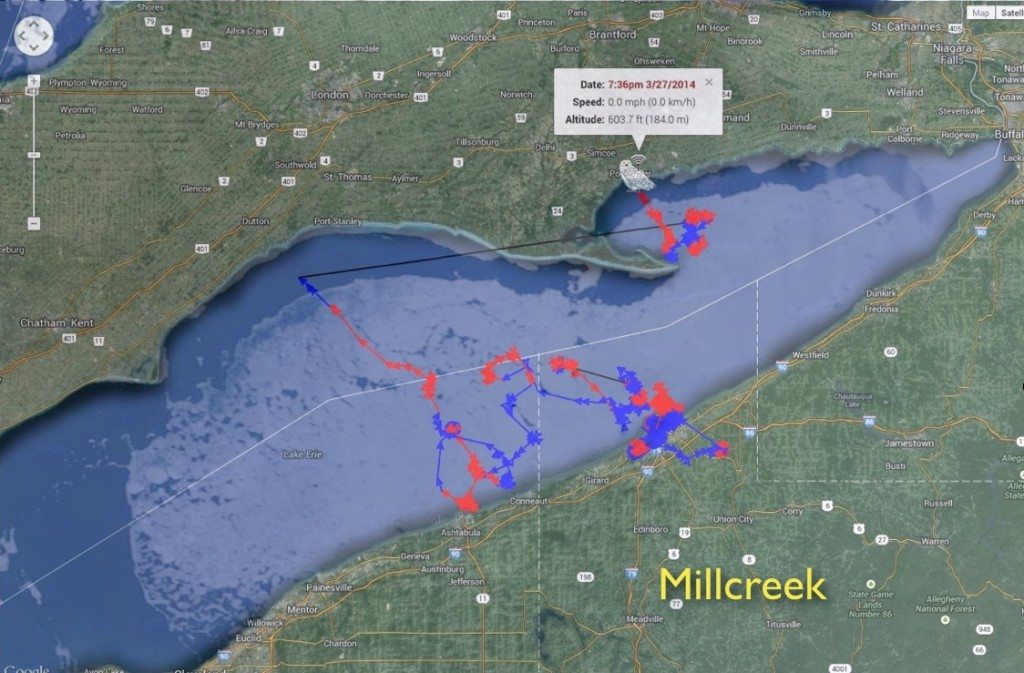 Other updates: Erie remains in eastern Michigan, pretty much where he was last time. Braddock didn’t check in this time after his major flight up and down Georgian Bay; he’s probably just out of cell range. Hungerford checked in, still just north of Cape May, NJ, near Stone Harbor and Avalon, while Monocacy’s transmitter continues to collect a torrent of data at 30-second intervals as she patrols the neighborhoods of urban Baltimore.

Marshfield remains near Chippewa Falls, WI, and Kewaunee hasn’t done more than make a few local flights from his wintering territory just west of Lake Michigan. Ramsey hasn’t checked in for two cycles, having moved about 65 miles southwest of his wintering site in Ramsey, MN. I’ve been looking at cell-coverage maps, and this area of farm country seems to have spotty coverage at best.

Buena Vista checked in a couple of times in the past week — more erratically than we’d like, but we’ve built up a terrific data set of locations for him since last December. Freedom, along with several other owls (Assateague, Duxbury, Cranberry and Henlopen among them) did not check in. We continue to be hopeful, but this is a dangerous time of the year for snowy owls, especially young ones like this season’s crop — once they start moving into new locations they often get into trouble.

Losing Sandy Neck
…And the rest of the bunch