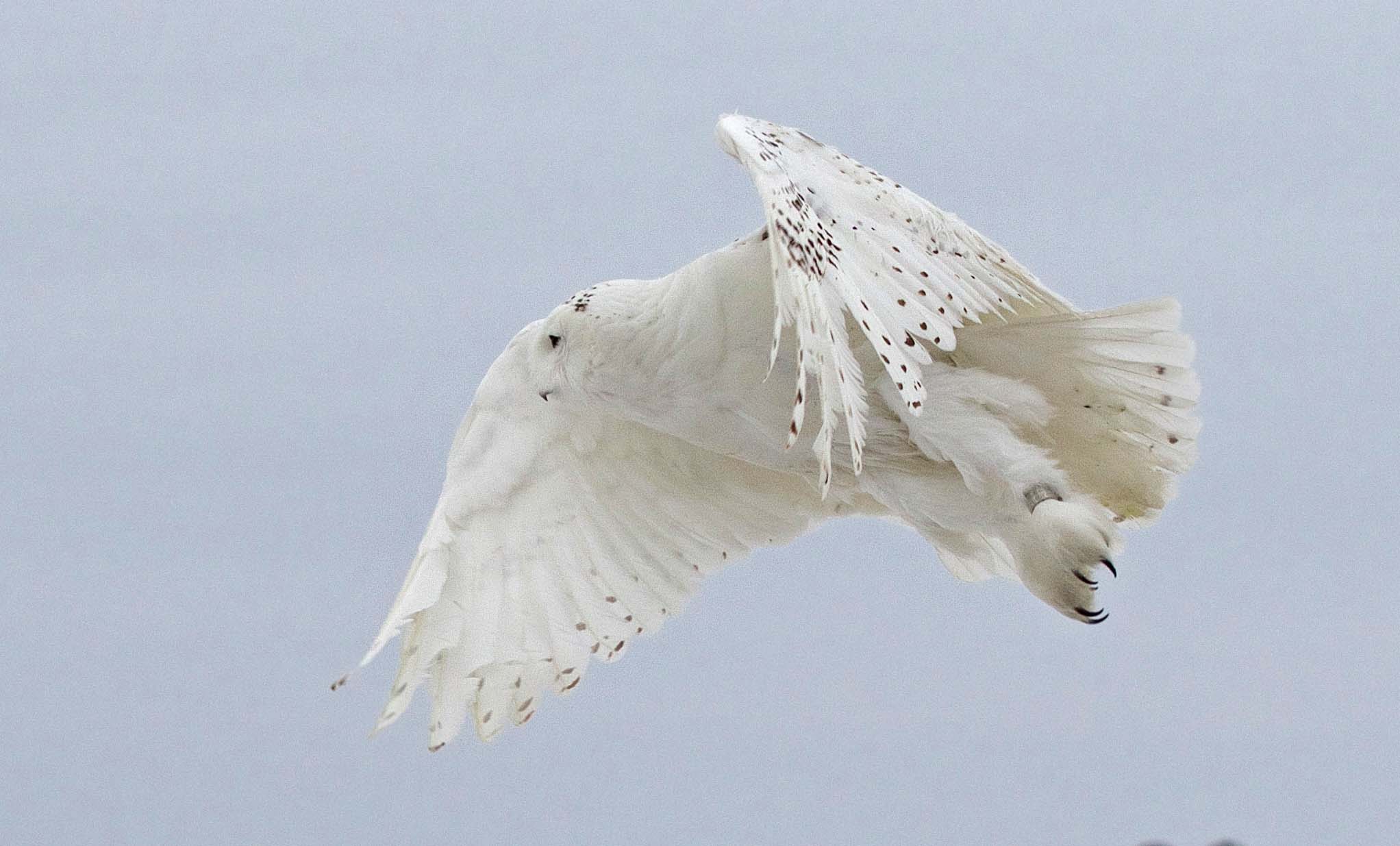 Banded and tagged, Goose Pond heads back into the wild — in a safer location than his old airport home (©Arlene Koziol)

Last winter, Wisconsin was a hotspot for SNOWstorm activity, with four owls tagged in the Badger State. It’s been quieter on that front this winter, but not for a lack of trying — Wisconsin has experienced a very heavy irruption, and our colleague, noted raptor biologist Gene Jacobs, has been busy trying to trap and tag snowies. But because so many of the owls this winter are adults, they’re more challenging to catch than last year’s juveniles. 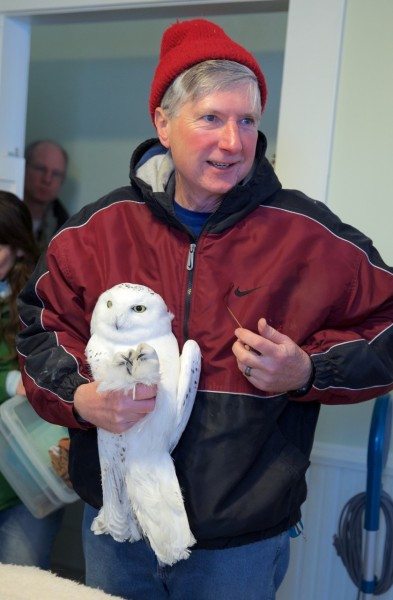 Raptor biologist Gene Jacobs with Goose Pond. Gene was one of the first members of the Project SNOWstorm team last winter. (©Arlene Koziol)

Last week, Gene and his crew spent several evenings at the Central Wisconsin Airport in Mosinee, part of his ongoing efforts to move snowies away from these vey high-risk environments — high risk for the owls, and for the planes that might strike them.

They had a number of close calls but no success, but Friday the 13th proved to be a lucky day. The evening before started inauspiciously; despite three snowies flying around the airfield at dusk, none showed any interest in the traps for hours — until, at 7:30 p.m., an adult male came into Gene’s bownet and was captured.

The next day, Gene moved the owl 104 miles (167 km) south to the Goose Pond Sanctuary, owned by Madison Audubon, whose members provided the funds for the transmitter. Goose Pond is part of a large complex of restored prairie, wetlands, pasture and crop fields near Arlington, WI, that was once the “Empire Prairie,” a 100-square-mile expanse that is now mostly corn and soybean fields.

The sanctuary abuts land managed by the University of Wisconsin Arlington Agricultural Research Station, all of which has been a magnet for snowy owls. Last winter, Goose Pond manager Mark Martin said, there were seven snowies within 1.5 miles of the sanctuary, and this winter they’ve been seeing three or four regularly. Mark said the owls seem to prefer the close-cropped pastureland over the tallgrass prairie, and last winter the owls could be seen sitting on ice on Goose Pond itself, or using a duck blind as a perch to hunt coots, ducks and muskrats. 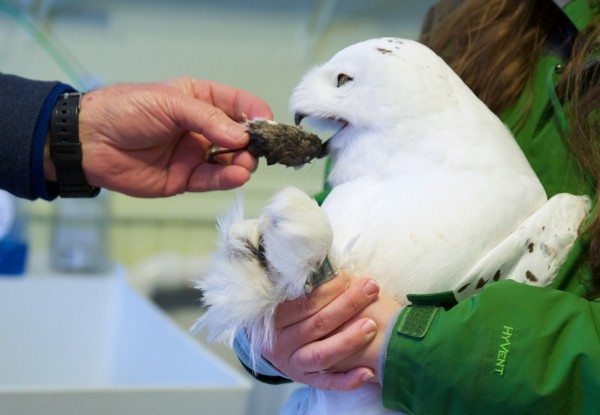 Tagged and ready to go, Goose Pond gets a going-away snack — a couple of mice. (©Arlene Koziol)

It seemed an ideal place to try a long-distance relocation — one of our goals this winter is to tag airport owls and move them a variety of distances and into a variety of habitats to test best approaches for keeping them away from airports. Much of this work is being done in cooperation with USDA APHIS/Wildlife Services, which handles owl trapping on many airports.

The sanctuary staff and snowy owl supporters were able to join Gene at the sanctuary to watch him band, process and tag Goose Pond. And after the tagging was finished, Gene gave the bird a couple of dead mice, which he gulped down. (That’s an indication of how well snowy owls generally tolerate the hubbub of capture and tagging. After all, if aliens captured you, did what aliens supposedly do to humans, and then offered you a hamburger, would you take it?) 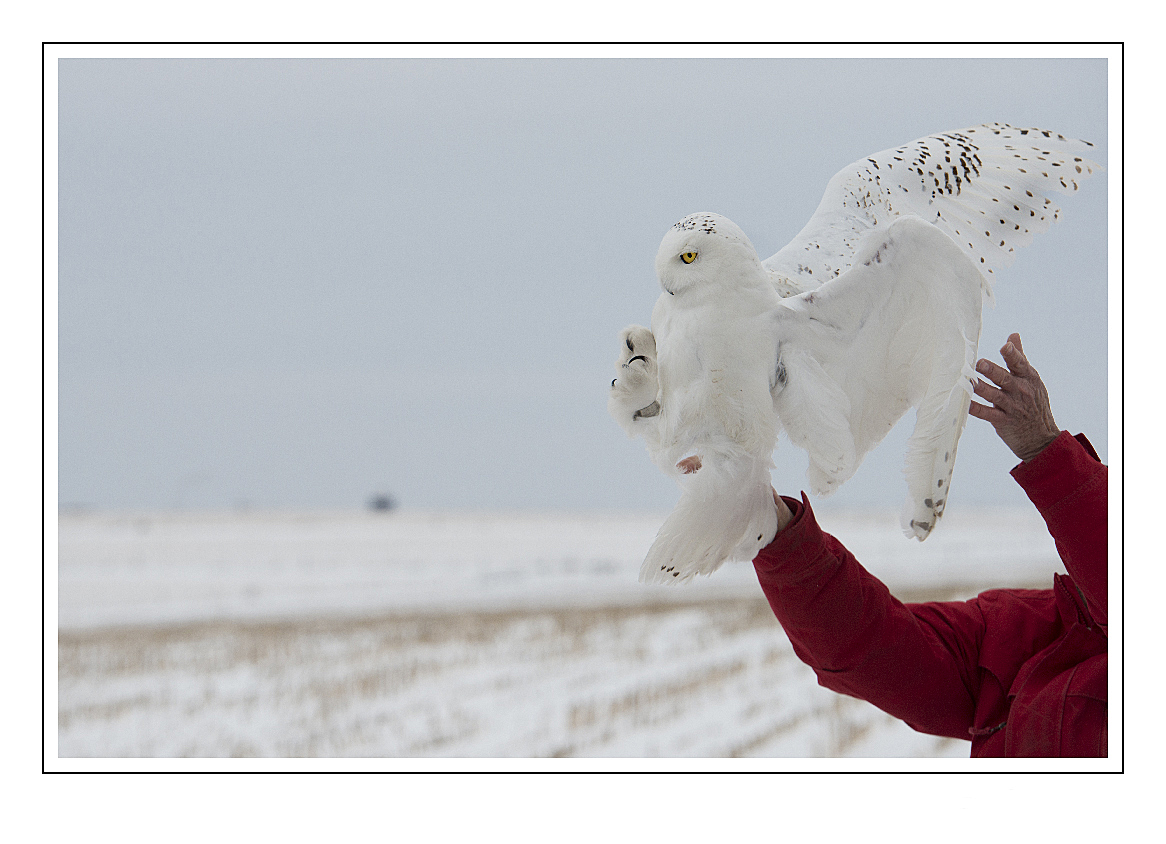 Then they headed outside, where Mark Martin gave the huge white bird a toss skyward and sent him back to the wild — in a location that should be much safer than his previous home at the airport.

We’re grateful for Madison Audubon’s support of Project SNOWstorm — and to all of you reading this, for your interest and enthusiasm.