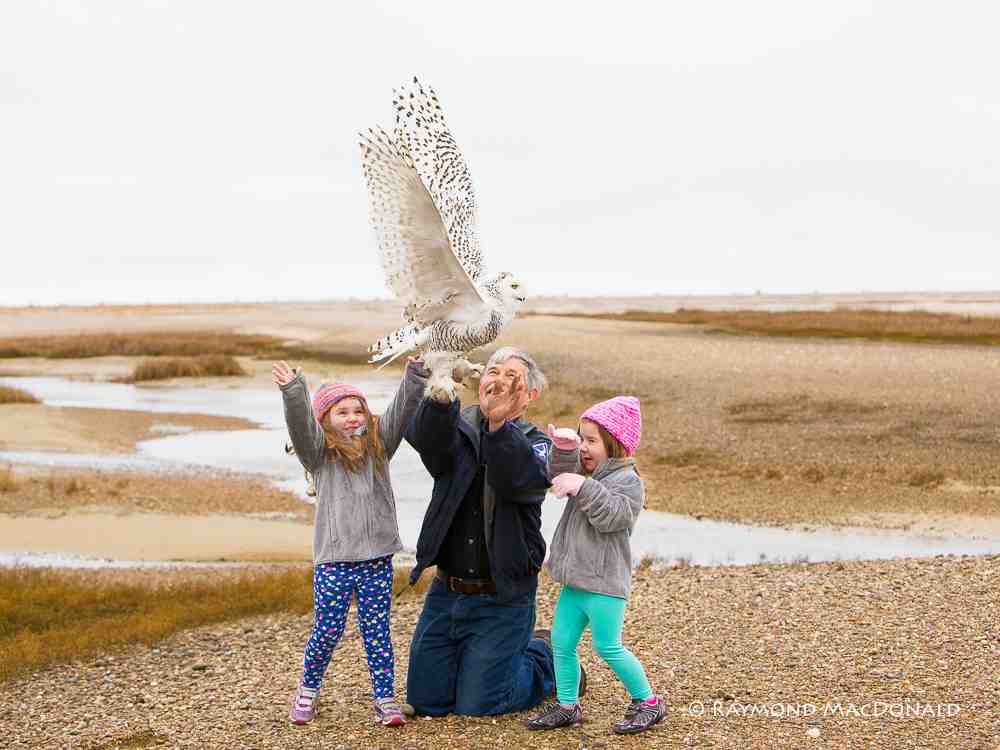 Here’s a great way to ring out the old year and usher in 2016. The newest Project SNOWstorm owl is Wampum, an adult female captured at Logan Airport in Boston byJeff Turner, Logan’s wildlife biologist, and relocated by Norman to a safer spot on Cape Cod earlier this week — with one of CTT’s new third-generation GPS/GSM transmitters on her back. She’s the 36th Snowy Owl we’ve tagged since Project SNOWstorm started in December 2013. 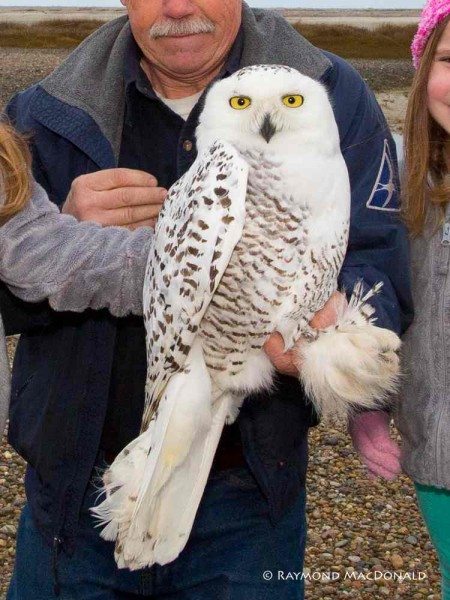 Wampum, already an adult, was originally banded by Norman last winter at Logan, and returned this year. (©Ray McDonald)

What’s more, this is Norman’s 35th year of work with snowies at Logan, one of the longest-running Snowy Owl projects in North America. During the mega-irruption of 2013-14 he moved more than 120 snowies from the airport, but even a more normal winter like this one, when numbers are much lower, he’s been busy — Wampum was the 15th snowy he’d moved from Logan this winter.

Caught, but in her case not banded — because she was already wearing one of Norman’s USGS leg bands. Turns out this was an owl he’d first captured and banded last winter at Logan, when the molt pattern in her flight feathers showed she was already an adult.

(Watch for a profile of Norman and his decades of Snowy Owl research in an upcoming blog.)

Wampum’s transmitter was underwritten by a generous donation, and while the donors wish to remain anonymous, we are nevertheless grateful for their support.

I had a chance to help Norman fit Wampum with her harness and transmitter, at the Blue Hills Trailside Museum in Milton, Mass., which Norman directs for Massachusetts Audubon. Because she was a bit of a biter, Norman draped a thin cloth hood over her head as we started, but like most Snowy Owls Wampum was remarkably calm in the hand as we eased the woven Teflon ribbon harness around her body and over her wings, testing it repeatedly for fit before we knotted, sewed and glued the attachments. 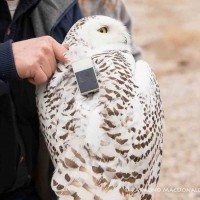 In addition to recording precise GPS locations, CTT’s new third-generation transmitters are include a temperature sensor and an accelerometer to record movement. (©Ray McDonald)

Wampum was something of an anomaly this winter — the third female  Snowy Owl Norman has caught at Logan so far, tipping the scales at a respectable 2,260g. She was also the first adult; all the others have been juvenile males. In contrast, SNOWstorm collaborator Tom McDonald in upstate New York has caught all adults, and all but one of them have been female. Whether that’s just coincidence, or an actual pattern of distribution this winter, is anyone’s guess.

Regardless of age or sex, Norman and Tom report that all the snowies they’ve caught this winter have been fat and healthy. That’s in contrast to the situation in the western Great Lakes, where more than a few snowies that appeared in October wound up at rehabbers, unusually thin. It’s possible these birds were coming from different areas, and perhaps with different dynamics driving their movements south.

Norman and two of his granddaughters, Alexa and Carmella Nihill, released Wampum on Dec. 30 near Barnstable on Cape Cod, about 60 miles (95 km) southeast of Logan. Normally, we name our tagged birds for their capture or release sites, but in this case the site name — Sandy Neck Beach — had already been used. (Sandy Neck, you may recall, was a bird Norman tagged in 2014 that subsequently drowned on Martha’s Vineyard during a violent nor’easter.)

Why “Wampum”? The word comes from the Algonquian wampompeag, and refers to the tubular, purplish-black beads that coastal tribes made from the shells of quahog clams or (in the case of white wampum) the inner spiral of channeled whelks. In addition to its ceremonial and diplomatic value, wampum became the general currency of the 17th century Northeastern fur trade, and the area where Wampum (the owl) was released was one of the Native centers of wampum manufacture in the 1600s.

And by the way — if Carmella (age 5) and Alexa (3) seem a little young to be helping their grandpa handle large raptors, it’s in their blood — their mother Danielle, Norman’s daughter, and his son Joshua, were helping their dad trap, handle and band Snowy Owls and other big birds of prey when they were about the same age. 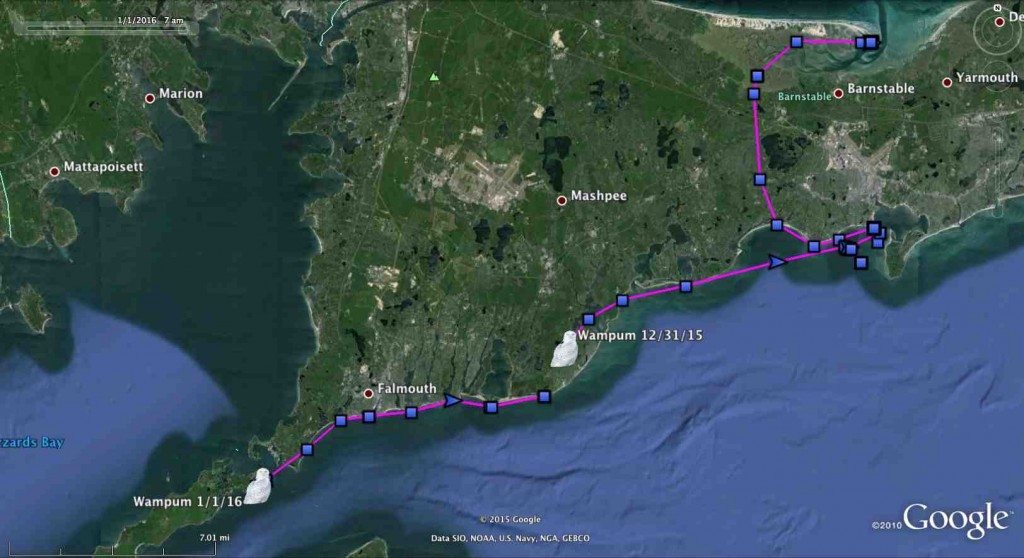 In the days after her relocation away from Logan Airport, Wampum moved south across Cape Cod and west to uninhabited Nonamessett Island. (©Project SNOWstorm and Google Earth)

After her release, Wampum hung around Sandy Neck Beach until dark, then headed south across the cape to Hyannis. She spent most of the day on the harbor breakwater and on Great Rock, which sticks up about a mile from shore. As dusk fell on New Year’s Eve, she took off across the southern shore of the cape moving west toward Falmouth.

Relocated owls usually bounce around a bit — often hustled along on their way by established snowy owls defending their winter territories — until finding a quiet spot of their own. Fortunately, Wampum hasn’t been moving back toward Logan. She continued south and west, and at last report was on uninhabited Nonamessett Island, one of the Elizabeth Islands that extend southeast from Cape Cod, between Buzzard’s Bay and Martha’s Vineyard.  (Like most of the Elizabeths, Nonamessett is owned and managed by the Forbes family of Boston, which made its shipping fortune in the 19th century.)

It will be interesting to see if Wampum stays in the Elizabeth Islands, which would provide plenty of good habitat and solitude, or if she crosses the channel to Martha’s Vineyard, which is a traditionally good spot to find Snowy Owls in winter. Either way, we’ll know about it, thanks to her solar-powered transmitter. We’ll have her interactive map posted soon, and updated regularly thereafter. 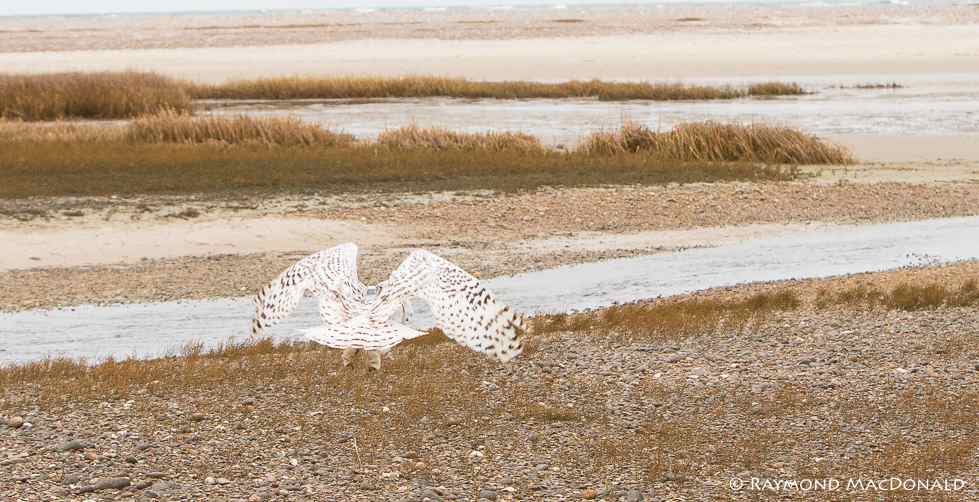 Her transmitter just visible between her wings, Wampum heads for the end of Sandy Neck after her release. (©Ray McDonald)

17 Comments on “Say Hello to Wampum!”