We hope you’re enjoying the latest map updates, which were posted last night. We’ll have another batch of updates on Saturday night, but I wanted to give you a sneak peek at one owl that hadn’t checked in during the last cycle: Millcreek.

This immature male was banded Jan. 19 at the Erie airport, and for the first several weeks, that’s pretty much where he stayed, except for one brief excursion southeast of town at the end of January. He was making us awfully nervous, moving around the runways and taxiways, and often hunting at dusk along I-79 and an intersecting railway.

But more recently he’s moved out onto the frozen surface of Lake Erie, like Erie, our other bird tagged that same night at the airport. Last night Millcreek phoned home, and while we’ll update his map (and eight others) on Saturday, I wanted to share his recent wanderings.

Here’s a composite image showing Millcreek’s movements, overlaid with a satellite image of Lake Erie from Feb. 22. It’s clear why Millcreek didn’t transmit on Sunday night — he was way out of cell range, near the international border on Lake Erie. 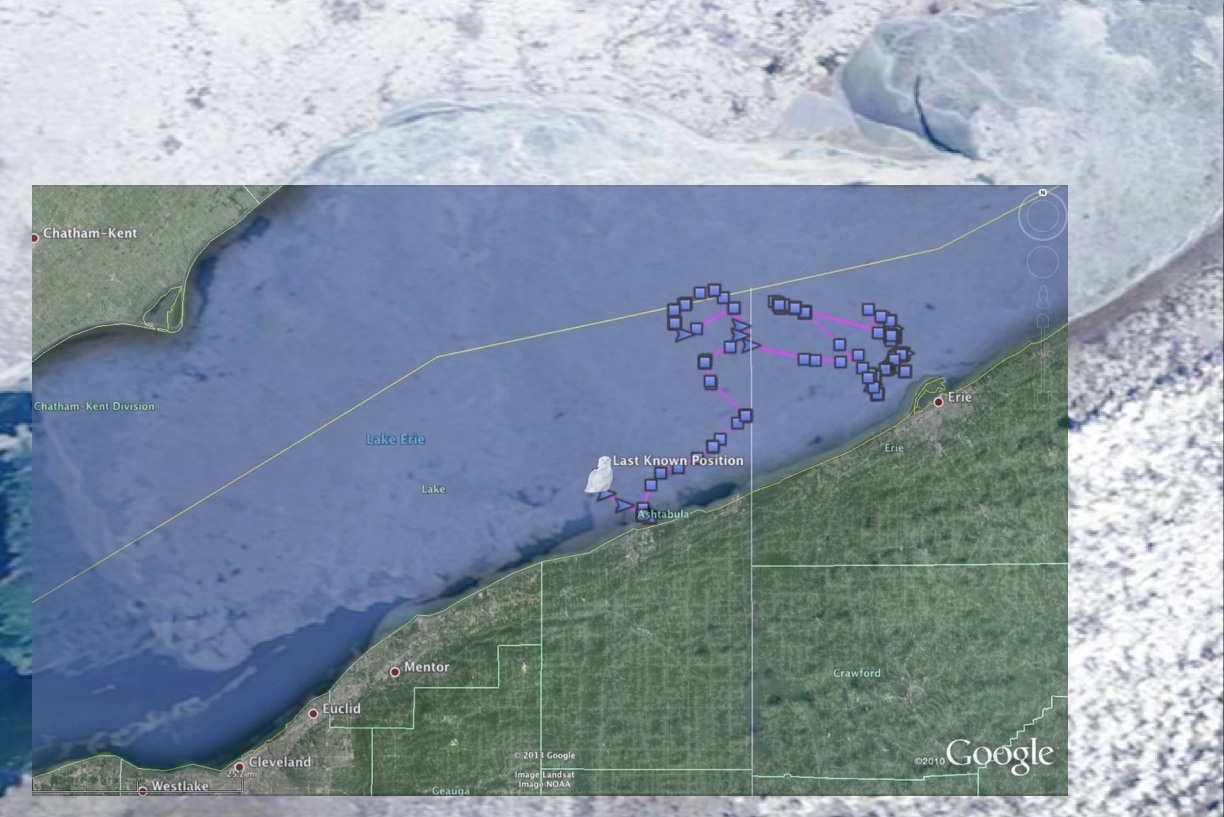 From a position just off Gull Point on Presque Isle on Feb. 21, he made a number of looping movements on the lake ice that carried him first up into Canada (just barely) and then down almost to the Ohio coast. Along the way, he spent about many hours riding on wind-pushed ice sheets, something we’ve seen a lot from snowy owls this winter.

Millcreek then moved rapidly back toward the coast, and he spent much of the day yesterday about 1.5 miles off the Ashtabula, OH, shoreline. At dusk, though, he was flying strongly back out onto the lake.

The recent satellite imagery, as you can see, shows a lot of open water at the western end and along the southwestern shore of Lake Erie, including near Ashtabula. The warm spell must have freed up some of the big ice plates, which accounts for some of the wind-driven movement we saw, but more importantly it created open water for ducks, grebes, loons and other waterbirds — and thus good hunting areas for snowy owls.

In all, Millcreek traveled at least 139 miles between Feb. 21 and last evening — not including whatever distance he ambled during those 48 missing hours.

Birders along Lake Erie have long noticed that once the lake freezes up, the snowy owls along the shoreline usually disappear. Folks had always assumed the owls moved south, to inland farm country. Some may, but as Millcreek and our other three Lake Erie/Ontario owls have shown this winter, it’s more likely that they become nomads on the open ice, a habitat that must feel very much like home to them.