What little ice there was this winter on Lake Ontario is rapidly decaying, but still enough to float an owl, at least in the northeastern bays. (This image is from March 6; it’s been too cloudy the past few days for satellite photos.) (NOAA CoastWatch)

If you live in the Northeast, you didn’t need much of a hint that spring is coming early this year — it was T-shirt weather across much of the region this week. Here in Pennsylvania, where I live, sheets of migrant tundra swans, Canada and snow geese were papering the skies the past few mornings, and spring peepers and wood frogs are in full voice. This is March?

The rapidly advancing season may have been working on our tagged owls, too, because suddenly a couple of our most reliable birds were AWOL — most notably Dakota out on the North Dakota prairies. She’s checked in, regular as clockwork since she was tagged in January, but Thursday night she failed to connect. She may just have been in a local dead spot, but it’s also possible she’s started moving farther north into the Plains, and is in a place with poor cell coverage.

Flanders also failed to check in, but she’s skipped once or twice before when she was out on Lake Ontario ice — and despite the weather, there’s still a lot of ice on the northeastern bays of the lake. But it’s breaking up fast, and our ice-loving birds may not have a lot of floes to ride if they linger much longer. 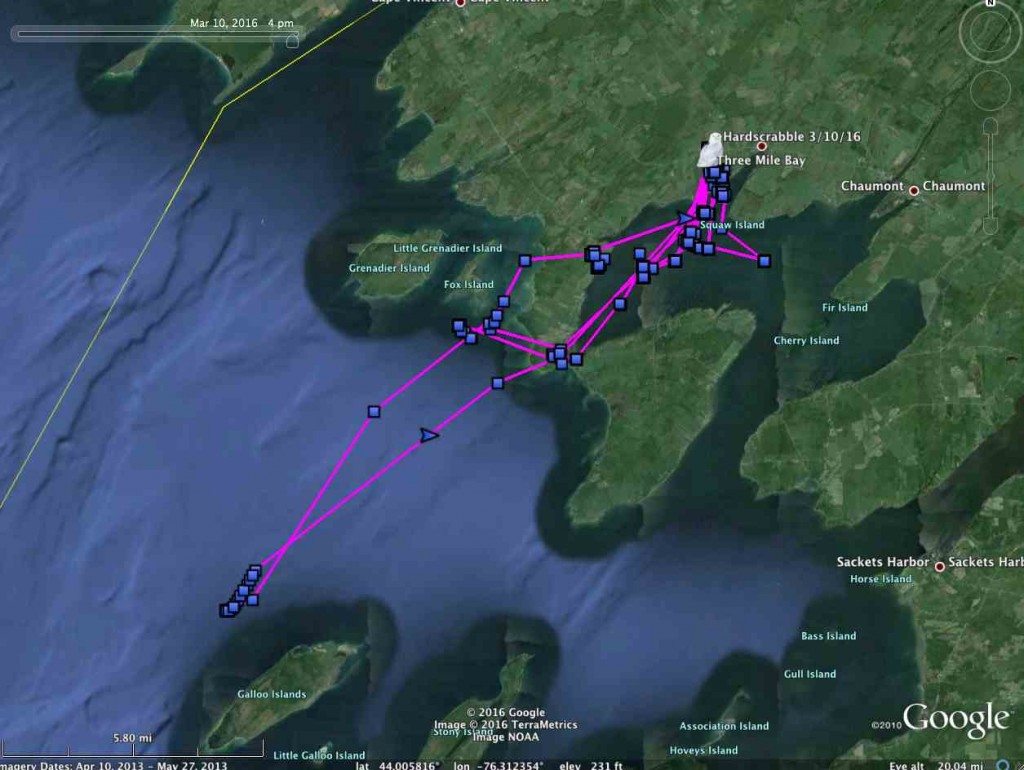 Ride the ice while the riding is good — Hardscrabble moved offshore for a bit this past week, before coming back to Cape Vincent and Three Mile Bay, NY. (©Project SNOWstorm and Google Earth)

Certainly Baltimore and Tibbetts have been using the remaining ice along Amherst Island, and for the first time since tagged her, Hardscrabble moved out onto the lake, riding wind-driven ice near the Galloo Islands before coming back to land at Three Mile Bay, New York. Chaumont was still nearby, hanging out as he has the past few weeks near (ahem) Hell Street.

Casco, who at last report was up on the New Brunswick/Maine line, also failed to check in. I’d bet she’s in the interior of the Gaspé somewhere, but we know from the golden eagle tracking that CTT does with its transmitters that there is surprisingly good cell coverage on the peninsula, so hopefully it won’t be long before we hear from her again.

Salisbury remains our biggest concern, since he’s now spending all of his time moving between Boston’s Seaport District on one side of the Charles River, and on the other Logan Airport — where he was originally banded in 2014, and trapped and tagged again this winter. All we can do is hope he’s learned to avoid those giant, loud (and very dangerous) white birds

No word on this past check from Buckeye, who reappeared unexpectedly last week. But we continue to get backlogged data from Erie, even though his transmitter, which clearly has some issues, won’t tell us where he is now. 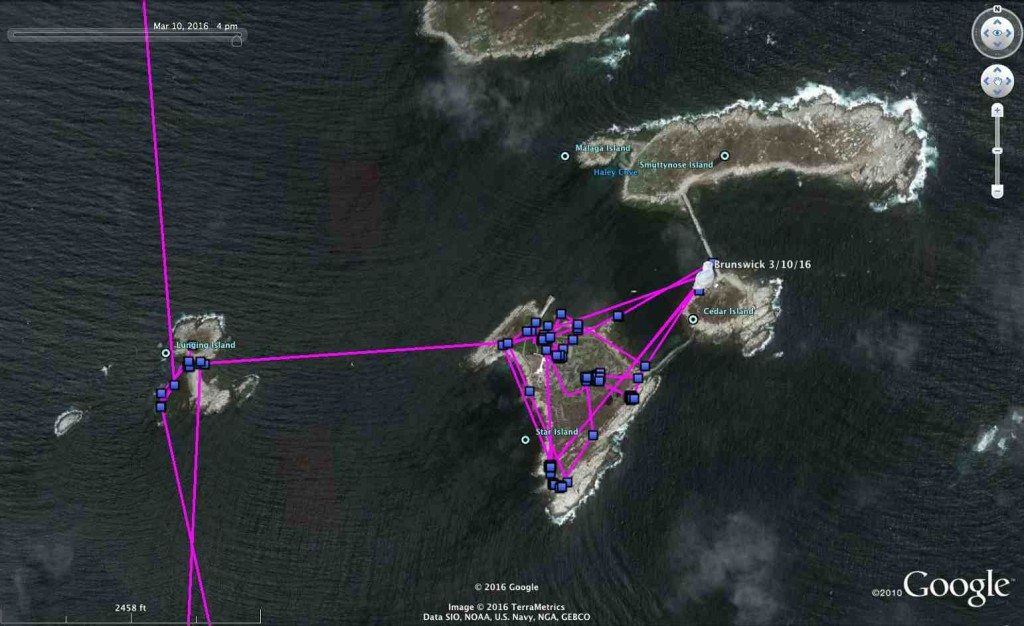 Sorry, New Hampshire beer fans — Brunswick hasn’t made it to Smuttynose Island quite yet. (©Project SNOWstorm and Google Earth)

Up the coast, our newest owl Merrimack remained near her release point close to Newburyport, Mass., while Brunswick — which had wandered down to northern Massachusetts — had flown to sea. On March 8 she left the mainland and flew 10 miles (16 km) out to the Isle of Shoals archipelago, where she’d briefly stopped on the way south.

She’s still avoiding Appledore Island, where a large female snowy is in residence, but instead has been moving among four of the smaller islands — White, Star, Cedar and Lunging. For the fans of certain New Hampshire-brewed beers, Brunswick has unfortunately not made it the few hundred yards to Smuttynose Island — at least, not yet.

Wampum is Back!
Merrimack Closes the Season