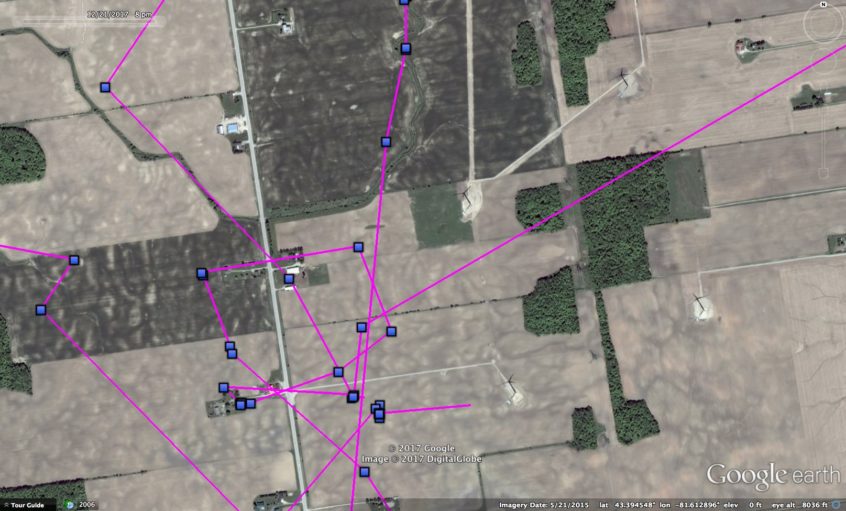 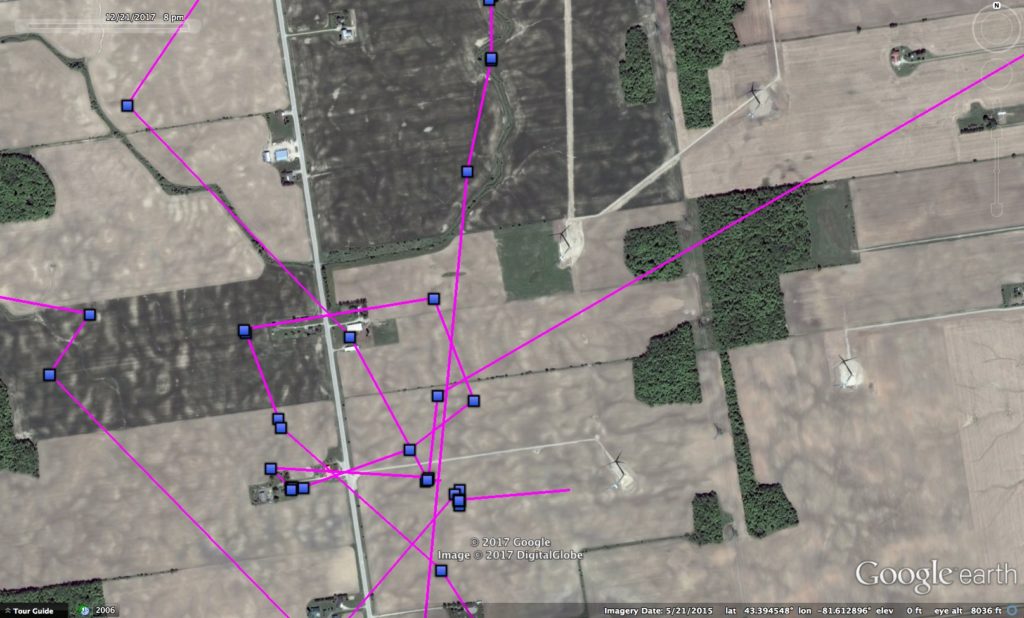 A close-up of Sterling’s movements near Zurich, ON, in an area of farmland with a number of wind turbines, whose shadows appear clearly on the ground. (©Project SNOWstorm and Google Earth)

One of our research goals this year was to tag snowies as early as possible, to better understand their early movements, and how and where they decide to settle down for the winter. This past week or more, we’ve seen one of our newly tagged owls appear to do just that, while four others still seem to have a case of itchy feet (er, wings). 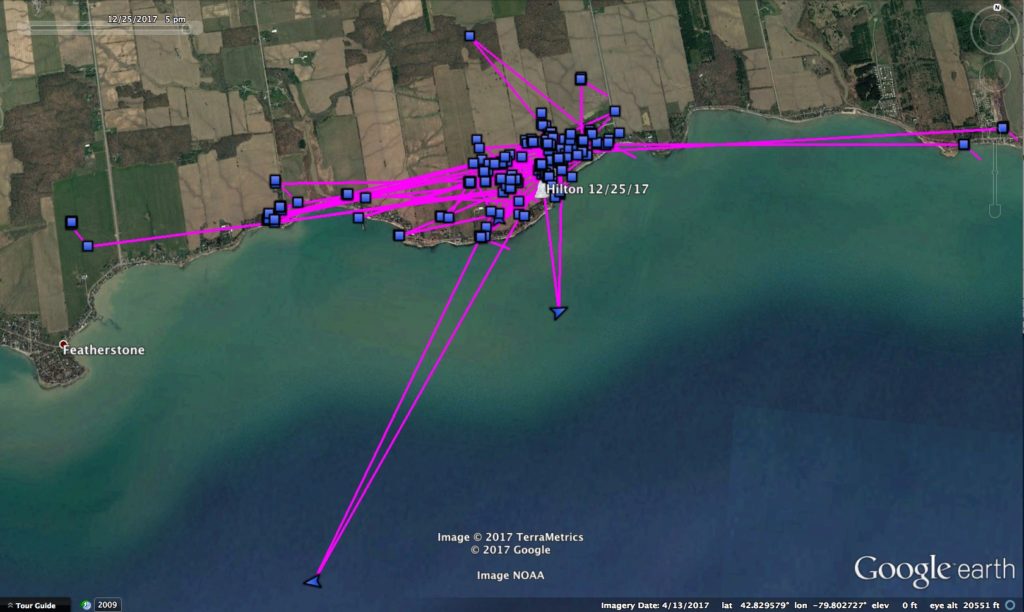 No doubt about it, Hilton seems to have found her spot. But will she stay there all winter, or keep moving? (©Project SNOWstorm and Google Earth)

Up in southern Ontario, the  juvenile female Hilton looks like she’s found a place she likes, after having moved some 230 km (142 miles) from where she was first tagged nearly a month ago along the southern shore of Lake Ontario near Rochester, NY. Since the first week of December, she’s really been zeroed in on a section of the north shore of Lake Erie just east of Featherstone, ON. Even though the lakeshore is nearby, she spends most of her time perching on houses in a cul-de-sac community, and hunting agricultural fields just to the north and west, presumably for small mammmals. 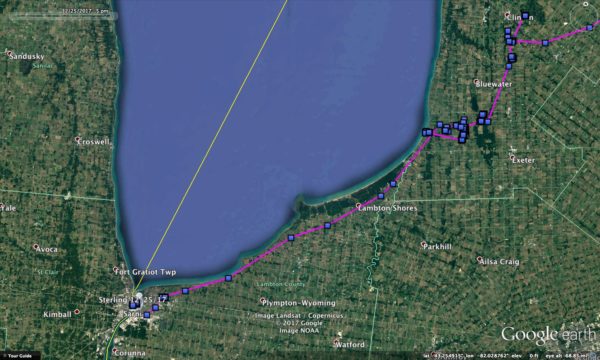 Sterling has moved from eastern Lake Ontario to the southern tip of Lake Huron. (©Project SNOWstorm and Google Earth)

The other juvenile female we tagged in upstate New York, Sterling, has by this point moved farther than almost any other owl we’ve tracked during winter. Having flown along the southern edge of Lake Ontario, she kept moving west, finally reaching Lake Huron on Dec. 17. After reversing course for a few days  and staying in flat farmland south of the town of Zurich, ON (where there are several large wind turbines that she avoided), Sterling hit the road again. She flew another 71 km (45 miles) down to the southern tip of Lake Huron and has moved back and forth across the St. Clair River between Sarnia, ON, and Port Huron, MI. 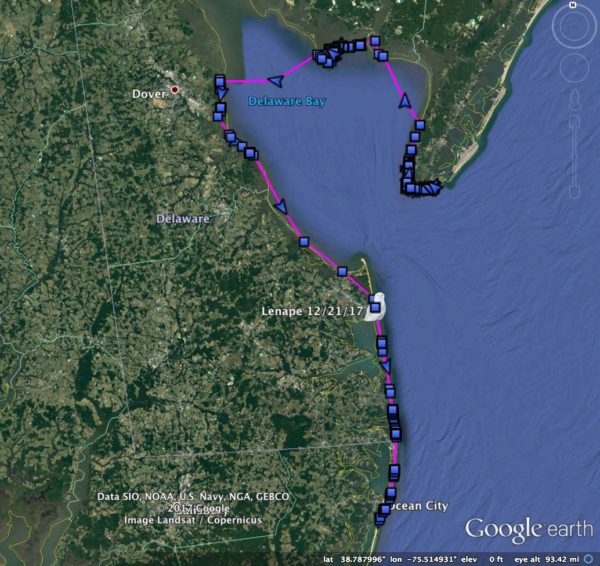 Off the grid for almost two weeks, Lenape reappeared with 1,700 GPS fixes showing his travels around Delaware Bay, down to Assateague Island and back north. (©Project SNOWstorm and Google Earth)

Down on the mid-Atlantic coast, our three tagged males are also still roaming all over the place. The biggest traveler has been Lenape, who was actually AWOL for almost two weeks. The last time he checked in on Dec. 7, he was on the main beach at Cape May, NJ — and then he disappeared, leaving us concerned that something might have happened to him. But Dec. 21 he phoned home and uploaded more than 1,700 GPS points, showing that he’d flown up the east side of Delaware Bay, spending a couple of days among the immense tidal marshes at Egg Island Wildlife Management Area. Then he crossed the upper bay to Delaware, an overwater-crossing of about 14 miles (22 km), flying around 33 mph (53 kph).

From there, Lenape headed all the way down the Delaware coast to Maryland, crossing the Ocean City Inlet and onto Assateague Island — at which point he reversed course and flew back north about 34 miles (56 km) to Cape Henlopen, DE, where he was sitting at dusk on Dec. 23.

Island Beach, who had been the most localized of the three New Jersey boys, hit the road himself in the past week and a half. For the first two weeks after he was tagged, he stayed very close to where he was caught, perching on the wooden dune cross-overs that the state park, and hunting the back bay areas at night. But on Dec. 12 he lit out for the north, flying 33 miles (53 km) up the New Jersey coast to Asbury Park and Long Branch by Dec. 15. Then he turned around, and flew all the way back south again, covering 111 miles (178 km) in a couple of days to the tip of Cape May, rounding the point and moving another 30 miles up the bayside to Egg Island WMA, about 10 days after Lenape had been there. 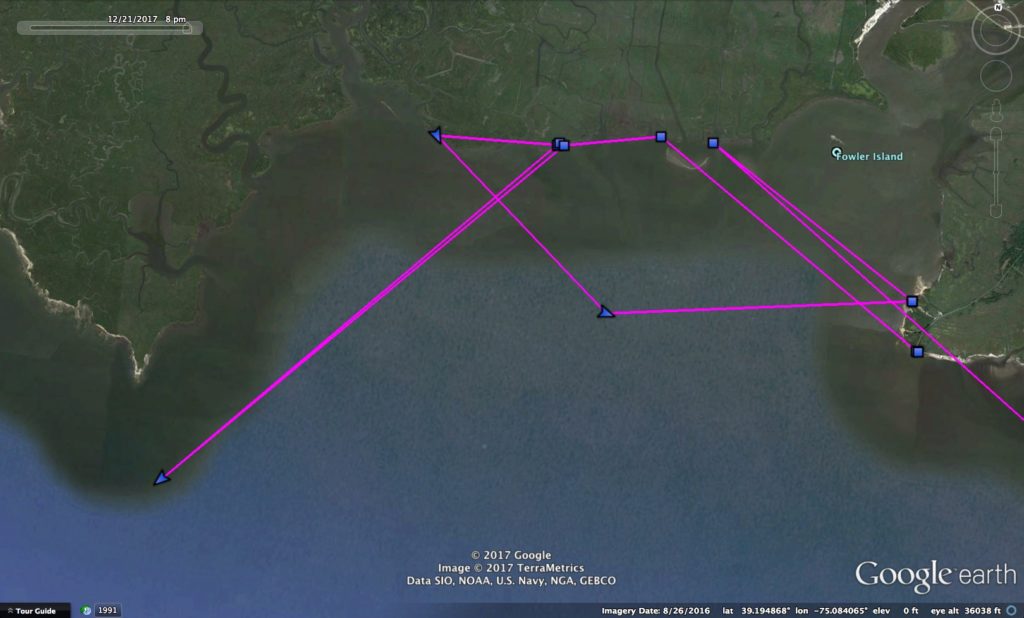 Gonna cross the bay? Maybe not, as Island Beach gives it a try and heads back to land. (©Project SNOWstorm and Google Earth)

Island Beach looks as though he attempted a bay crossing but chickened out. A few hours before dawn on Dec. 20, he flew four miles (6.5 km) southwest into the bay — then turned back. Later, though, he cut the corner off the top of the bay by making an 11.5-mile (18 km) flight overwater back southeast along the Jersey side of the bay, but he likely had land in view the whole time. Dec. 20-21 he cut across the top of the south Jersey peninsula, then moved halfway back up the Atlantic coast of the state to Brigantine, not far south of where he started. 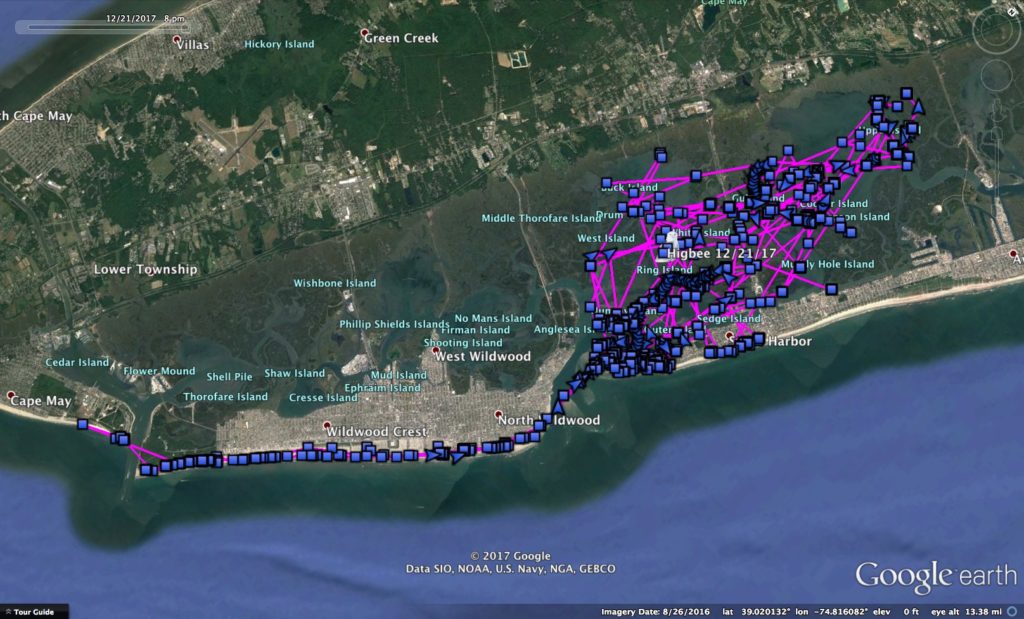 Even Higbee couldn’t resist a little wandering, down to Cape May and back up again. (In this map orientation, north is to the upper right.) (©Project SNOWstorm and Google Earth)

Higbee, the third juvenile male we’re tracking on the New Jersey coast this winter, has been the most stay-at-home of the trio, but even he made one excursion. Mostly he’s been hunting the fertile marshes near Stone Harbor, much of which is part of Cape May Wildlife Management Area. But Dec. 9 he took a quick trip down through Wildwood to the U.S. Coast Guard Training Center on Cape May itself, then back up the wildlife management area the following day. He spends his days sitting quietly on buildings in Stone Harbor, and all of his nights out over the marsh — hardly the “diurnal” owl many birders still of snowies as being. 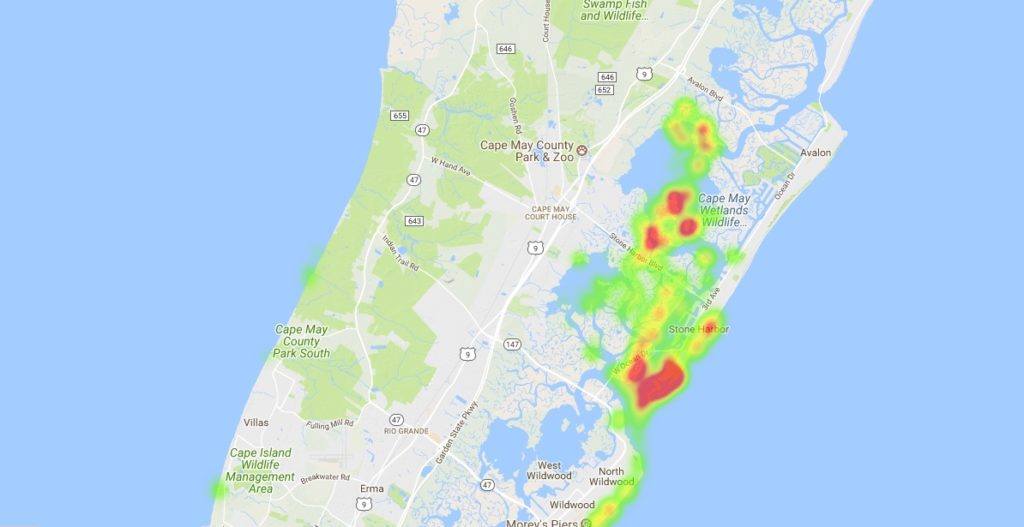 This “heat map” uses color to show the areas Higbee is frequenting the most — the southern end of the town of Stone Harbor where he roosts by day, and the tidal marshes of Cape May WMA to the north where he hunts at night. (©Project SNOWstorm and Google Earth)

Finally, you’ll recall that Hardscrabble, recently returned for his third winter of tracking, initially showed up right back in his 2016-17 winter territory in southeastern Ontario near the town of Cobden. Perhaps the rodent population there isn’t what it was last winter, because in the past week Hardscrabble’s moved about 68 km (42 miles) southeast to near Kinburn, ON — an area he’d visited last spring before migrating north, and just a few kilometers from where Baltimore wintered last season. 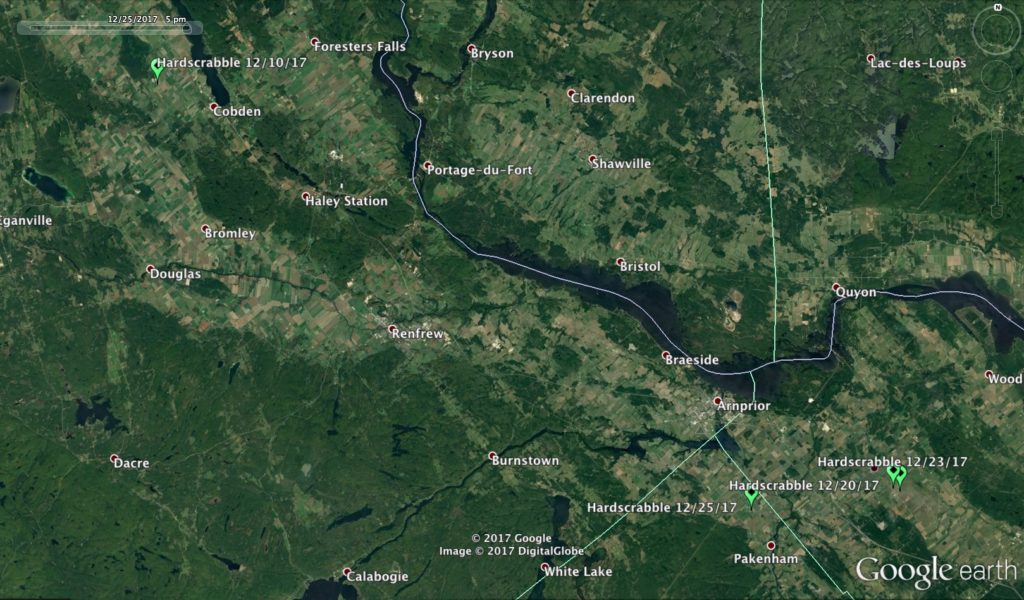 Hardscrabble has left his 2016-17 territory and moved southeast, close to where Baltimore wintered last season. (©Project SNOWstorm and Google Earth)

Hardscrabble’s transmitter is still rebuilding its battery charge, so we just get a little of his backlogged data with each transmission, along with his current location. With the short days and low sun it will likely take a few weeks for it reach optimum voltage, but in the meantime the unit is still recording his current data as well, and we should get it all in the next month or so. Wells and Chickatawbut are also in recharge mode, but with the solstice yesterday we’re in the darkest time of the year — what we morbidly refer to as “the valley of death” for solar-powered transmitters. But that will start to change in the coming weeks, as the day-length and solar angle both begin to recover.

Halfway there!
In Memorium: Don Crockett