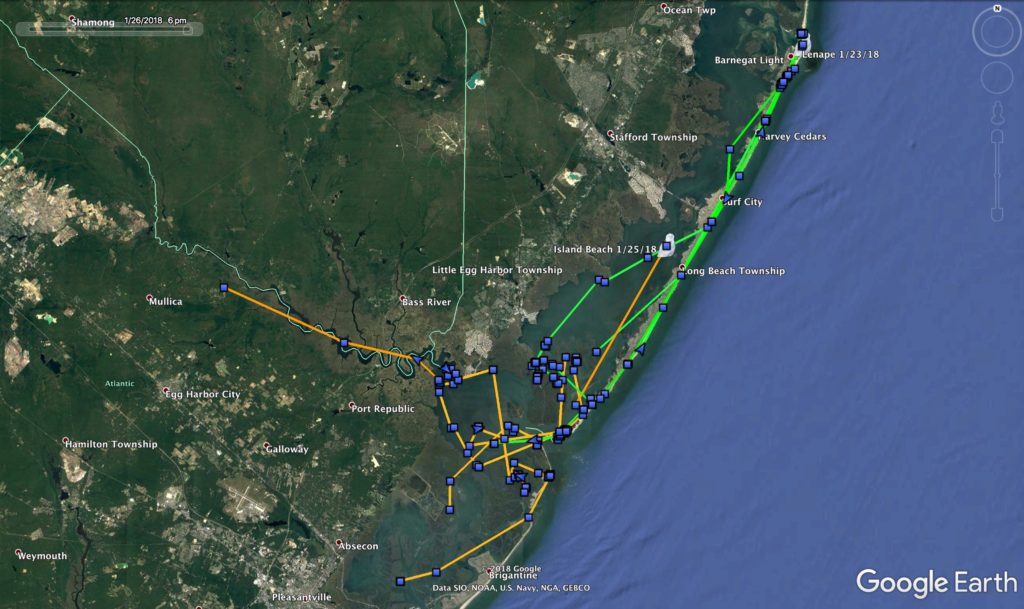 Island Beach and Lenape keep dancing around each other, but never coming too close. (©Project SNOWstorm and Google Earth)

One of the goals we set for ourselves this winter is to track the movements and interactions of neighboring owls, as we did several years ago with Whitefish Point and Chippewa in northern Michigan.

So this winter we’ve made an effort to trap and tag snowies in close proximity to one another, starting with Island Beach and Lenape on the New Jersey coast. While those two (especially Lenape) have wandered hundreds of miles, they have also been fairly close to one another many times this winter.

This past week, Island Beach made an uncharacteristic move inland along the Mullica River before returning to the coast on Little Egg Harbor, while Lenape was just moving up and down Long Beach Island, most recently at the north end near Barnegat Inlet. Their tracks have often overlapped, but not within a week or more of each other. 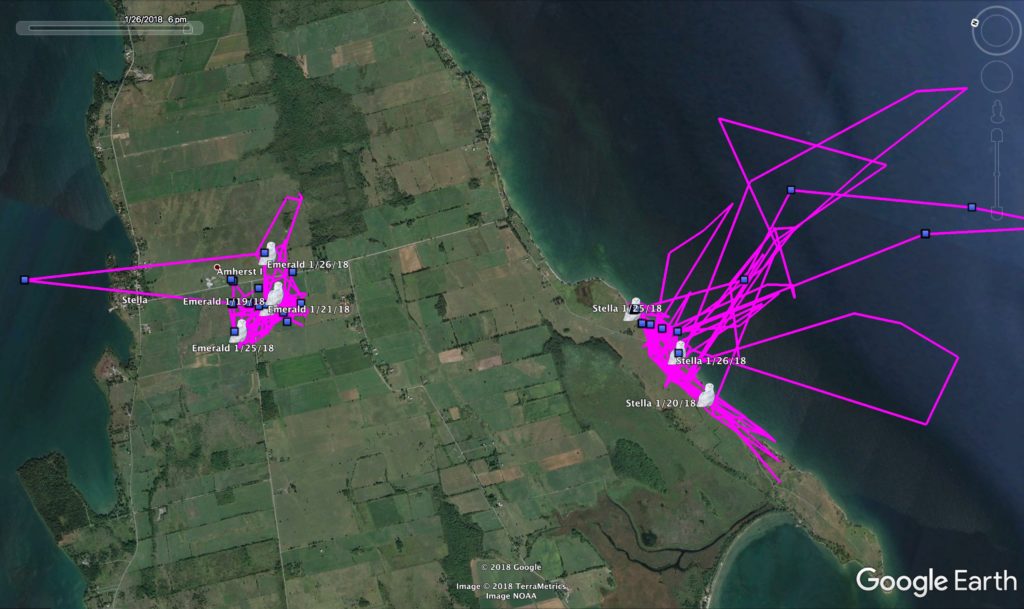 Emerald (left) and Stella are keeping to themselves on Amherst Island, with Stella spending her days on the ice and nights on land hunting. (©Project SNOWstorm and Google Earth)

Another tagged pair (in the research, if not mated, sense) has also kept its distance. On Amherst Island, Emerald and Stella have remained in their territories at least 3.2 km (2 miles) apart, with Stella staying on the ice offshore during the day, then coming to land at night to hunt — a pattern we’ve not seen with any other snowy we’ve tracked.

The closest interactions we’ve observed this winter have been between Bancroft and Austin in central Wisconsin, however. Bancroft, you’ll recall, was already on winter territory in the Buena Vista grasslands, while Austin was relocated there about 10 days ago after being trapped at an airport near Green Bay. 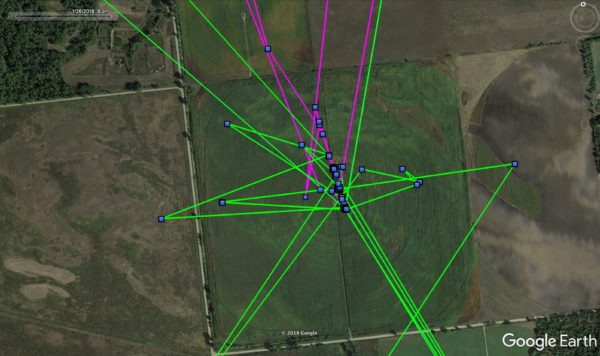 Although they have largely avoided each other, Bancroft (pupil) and Austin (green) have been using the same center-pivot irrigation rig as a perch — though at different times. (©Project SNOWstorm and Google Earth)

We wondered if Bancroft might run the newcomer out, but since then the two young males have been sharing a large area about 5,400 acres (2,200 ha) in extent — though not too closely. Bancroft sticks to a core area of about 500 acres (200 ha), while Austin’s movements wrap around it while generally not intruding on it — though they have one point of overlap in the south, where (always at different times) they have used the same center-pivot irrigation rig for a perch.

(Right now, our online tracking maps only display a single tagged owl at a time. We’re working on a modification that will allow viewers to watch two birds at once, but we have some technical hurdles to overcome.)

Photographer Monica Hall got this shot of Arlington, with his backpack transmitter shining in the late-day sun, earlier this month. (©Monica Hall)

Checking in on the rest of the crew, Badger and Arlington remain on their respective territories elsewhere in Wisconsin. Badger is using a roughly 760-acre (309 ha) territory southwest of Green Bay, around which she moves a lot during the day, somewhat unusually for a snowy owl unless it’s being disturbed by people, crows or larger raptors. Arlington has a bit more wanderlust, tracing a vaguely inverted J path north of Madison that stretches some 12 miles (19.5 km) from end to end, and he’s more typically nocturnal in his movements. 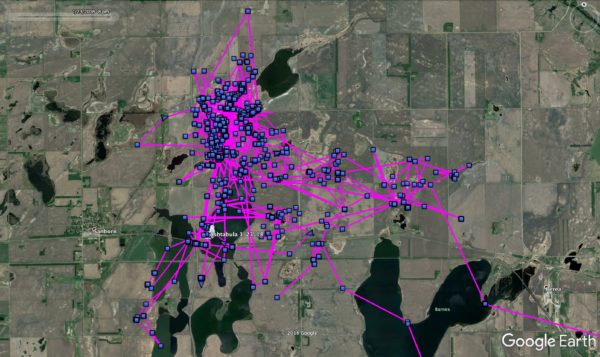 Ashtabula is hanging a bit farther south than in December, in an area with better cell reception. (©Project SNOWstorm and Google Earth)

Ashtabula checked in on Jan. 23, and he’s remaining east of Sanborn, ND, but a bit south of his activity area earlier in the winter — which is helpful, since there’s apparently better cell service where he is now. As we’ve seen with other prairie owls, he spends a lot of time around lakes and marshes, notably Sanborn and Round lakes.

Speaking of lakes, Hilton has taken up residence on and around the Mowhawk Lighthouse in Lake Erie, just south of Port Maitland, ON, making forays out on the ice from there. This image from NOAA CoastWatch (below) — taking advantage of strikingly clear skies across much of the Midwest and East last week — shows the extent of ice cover on Lake Erie, including the way prevailing winds push the shifting ice plates from shore to shore and end to end. 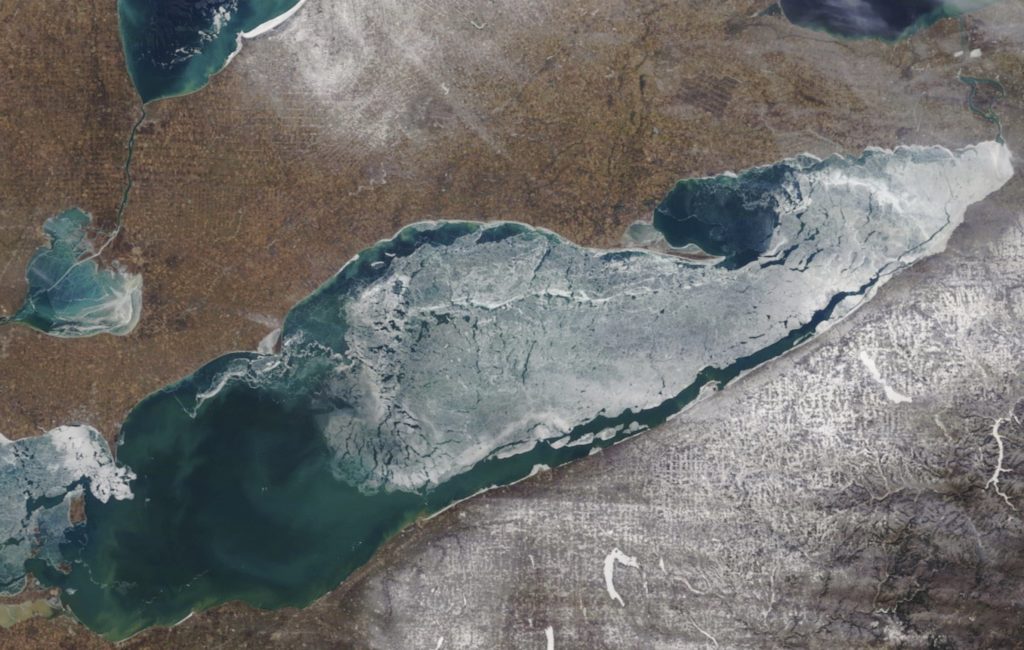 We also finally heard a peep from Sterling, who has been AWOL since Jan. 1. His transmitter has been having a hard time holding a charge; this may be a mechanical hiccup, but we also know that some owls make solar recharge a challenge by preening their back feathers up over the solar panel, and always roosting tucked up against an object. In any event, he checked in Jan. 25 from the middle of Michigan, in Gratiot County west of Ithaca. The good news is that, like all of the units, Sterling’s (which was deployed last year on Oswego, and reconditioned after her death) is showing daily improvement in its voltage as the sun climbs higher and shines longer.

Finally, among our returning owls, Hardscrabble remains in the Ottawa River Valley near Arnprior, ON, feeding us a dribble of his spring data, while recording his current data. He’s moving around a bit, but again, his transmitter is recharging nicely and we should be able to do a data flush pretty soon.

Chickatawbut hasn’t checked in since she uploaded all of her backlogged data a week and a half ago — transmitting almost 10,000 data points drained the battery significantly. More concerning is the continued silence from Wells. She connected Jan. 1 along the very busy Highway 440 in Quebec City, with a very low battery voltage, which had been drained by her data dump some weeks earlier. So while we suspect her silence is battery-related, we can’t entirely rule out that something may have happened to her. Keep your fingers crossed for good news from her before too long.

Sinepuxent and a report from the 'southern' SNOWstorm
Bancroft and Austin (and Badger and Arlington and...)