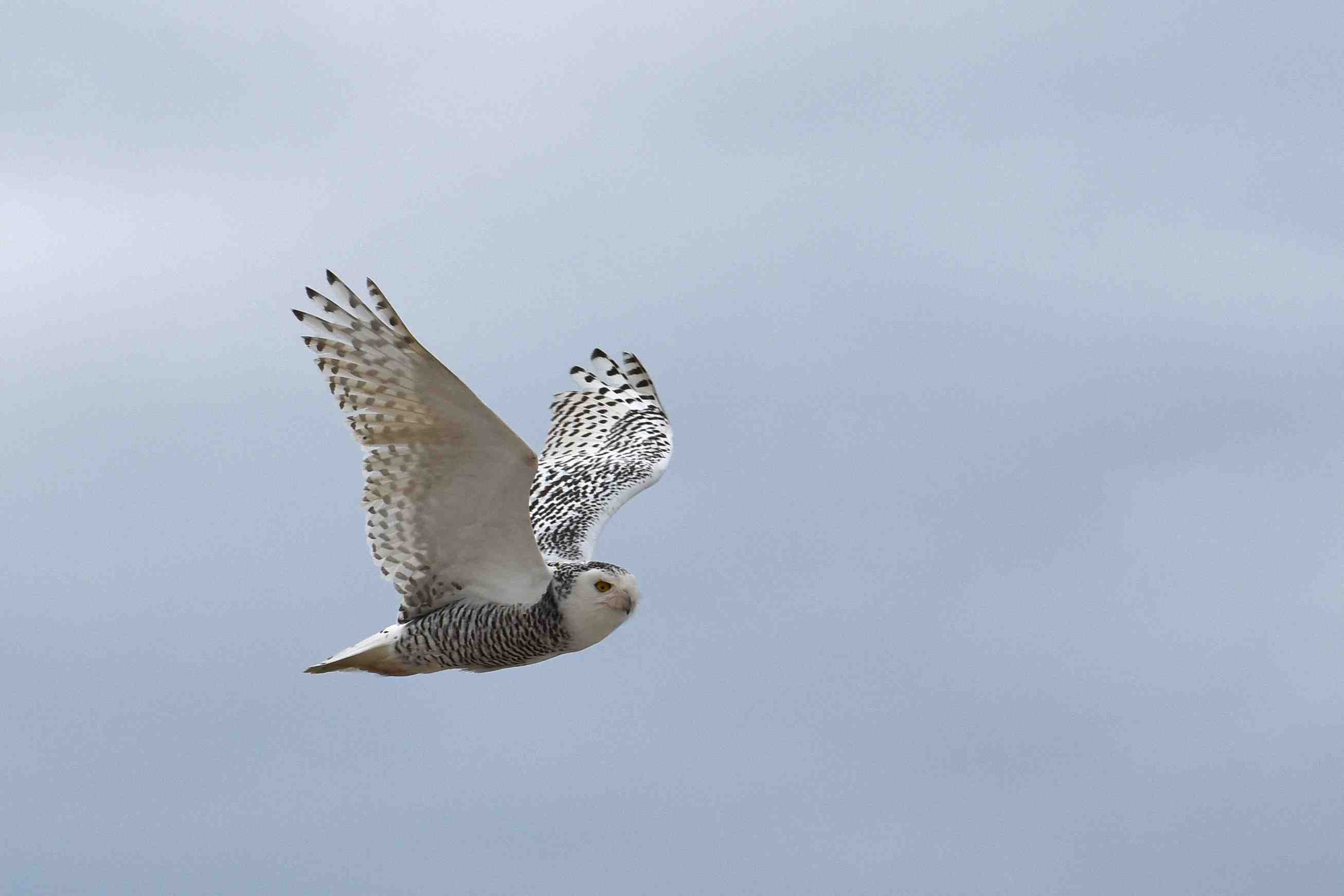 Delaware, the most unique owl in Project SNOWstorm, on the wing over Assateague Island. (©Allen Sklar)

The owl we call Delaware has an interesting history and is unique in a couple of ways.

I first trapped her in December 2013 on the Delaware coast, she was the first snowy owl ever banded in “the First State,” as Delaware proudly calls itself. A few days earlier, she apparently was feeding on the carcasses of a dead dolphin. Her facial feathers were stained by the fats from dolphin blubber and her perfume was far from pleasant.

That was unusual enough — but later in the winter she moved across the Delmarva Peninsula onto the western shore of the Chesapeake Bay in Maryland, and eventually suffered a wing injury at an airport.

That landed her in rehabilitation, first at the Maryland Zoo and then at Owl Moon Raptor Center in Boyds, Maryland Then she went back to the zoo for the summer, and finally to Tri-State Bird Rescue in Delaware for pre-release conditioning. (You can read more about her treatment here.) By last month, she was ready for release.

Ordinarily, we wouldn’t include a rehabbed bird in a study of wild owl ecology and movement, but Delaware had received some cutting-edge care, and the veterinary team wanted to see how she fared after her release. So when she was turned loose on Assateague Island, MD, she was wearing a GPS-GSM transmitter.

She stayed on Assateague, close to her release site, for several days before heading south. Passing through Chincoteague, VA, she eventually made her way to the space flight facility on Wallops island. She spent several days touring the site — perhaps viewing the launch pad damaged when a rocket exploded in September — then returned to Assateague.

All the while, she displayed the normal behavior we were looking for. She rested during the day (except when disturbed by birders, photographers or surf fishermen that got too close). Around dusk each day, she became active as she hunted rabbits in the dunes or waterfowl over the coastal bays. Although she’d spent almost 10 months in captivity — more than half her life — in only a few days Delaware had resumed being a normal, wild snowy owl. 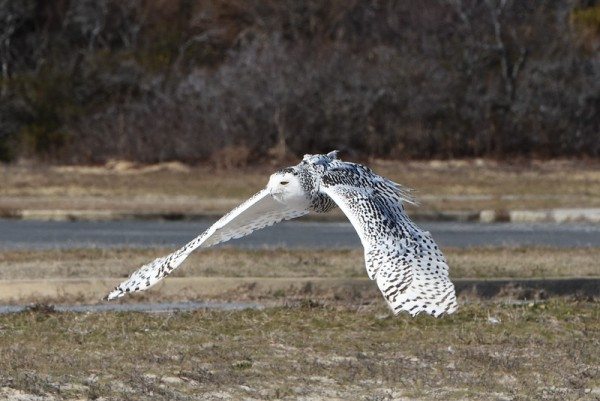 Delaware – her feathers were covering her transmitter, reducing its charge (© Allen Sklar)

While we followed her remotely, we also had first-hand reports from people who visit the island regularly. Photographer and fisherman Allen Sklar, who spends many hours on Assateague, is one of our trusted observers, and he kept a regular check on Delaware. He not only treats the owls of Assateague with respect, he’s provided us with photos and detailed reports. (And his photography is as good as his field work.)

While Delaware’s behavior was exemplary, we noticed a steady decline in voltage in her transmitter that didn’t please us. The unit had been thoroughly tested and charged well before deployment. We know that the behavior of the owls often makes charging challenging — although they sit in the open, they almost always face the sun, so the transmitter is in almost always in shade.

But there was something else going on with Delaware’s unit, and some of Allen’s photos suggested why — her back feathers were covering most of the solar panel. Though rare, every once in a while we get an owl like this, which habitually preens its feathers over the unit. 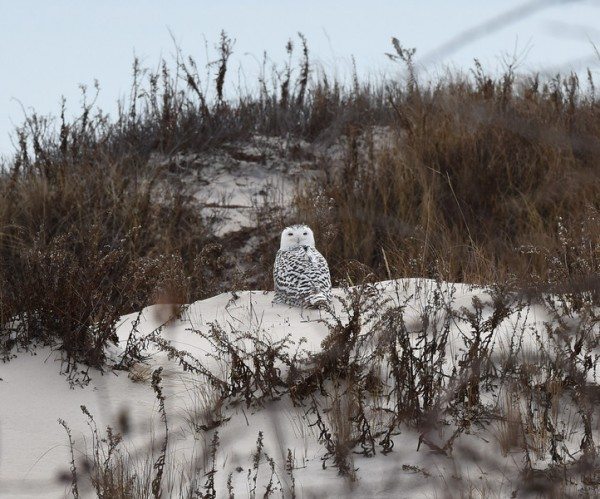 Another check-in, another drop in battery charge, another set of photos showing limited exposure of the solar panel, and we decided it was time to intervene. Delaware had to be retrapped, before the battery drained and she moved on.

This would also give us a chance to evaluate her condition and consider our alternatives. After all, we weren’t sure how a long-term captive like her would be faring back in the wild.

I headed out on Jan. 10 with hopes retrapping Delaware. Allen had located her in the middle of the day and it was unlikely she would move before I arrived. Unfortunately, a fender-bender on the way delayed me, and by the time Allen and I got out to where she had been, the light too poor to see her. (Looking at her tracking map later, we realized we passed her by twice without knowing it.) 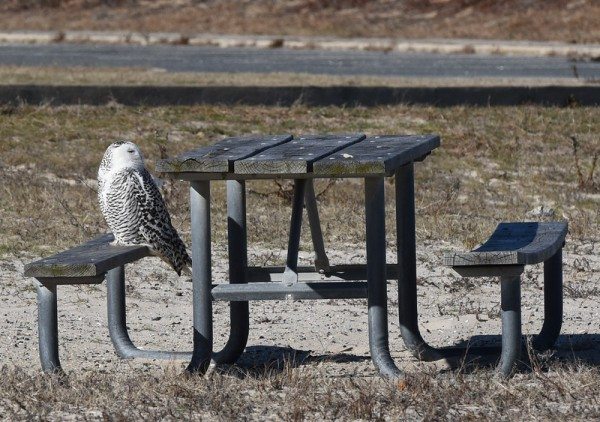 The next morning, Allen and I headed out to a frigid Assateague sunrise. The sand was frozen and everything sparkled from frost as we drove the entire Maryland portion of the island in search of Delaware. Rafts of scoter and other sea ducks were plentiful, and a loon could be heard calling. A resting seal lolled on the beach, eyeing us warily as we drove by. But all we found was Virginia (the state, not an owl) on the other side of a fence marking the state line.

Leaving the off-road portion of the park, we split up to check a few favored perches, and both found her at the same time, sitting on a picnic table bench in a day use area. We made a few trapping attempts but Delaware showed no interest in my lure, and she was also easily flushed as she is not very fond of people. When we left for a short while to get some food, the owl slipped away, too.

Now, with the sun dropping lower, I searched every place I could think of, including all her favorite perches. As a last ditch effort, I rechecked a small section of undeveloped dunes that she sometimes visited. I walked in from the north, hoping the new angle might reveal a well-hidden owl. No luck — but when I looked back towards my car, a lump in the grassy top of a small dune caught my eye. I had almost parked right next to her! 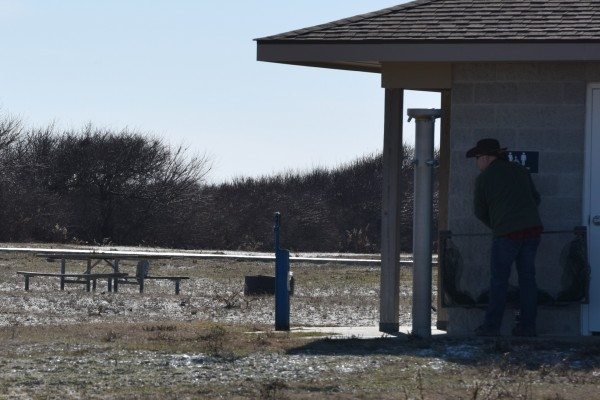 I use the natural features of Assateague Island to stalk my quarry, Delaware, perched on the bench of a picnic table. (© Allen Sklar)

Now to trap her. I set my bownet almost 600 feet away, but in plain view of the owl’s detailed vision. And I waited. Dusk arrived, the magic moment when snowy owls usually leave their daytime roost to take a pre-hunting perch, but she didn’t move. Darkness came, and she still didn’t budge. There was no moon and a slight fog, and I could only barely make out my trap as she finally drifted past and flared over it. 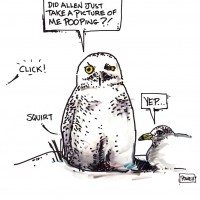 She appeared and disappeared again, so I got a small flashlight from the car, which provided just enough light to see the trap — and just enough to see Delaware leave it. So I waited more an hour — until at last she came back. When she was finally positioned in the center of the net, I was safely able to trigger the bow with my remote control.

A quick weight check showed that Delaware had gained more an ounce since her release, and there was further evidence that she was eating well — I found a large pellet she’d cast near the net. (That explained the long wait; she was actually waiting until she was hungry before going for my lure.)

It was clear that she was doing very well in the wild, and because of the issue with the feathers covering the solar panel, we decided to remove the transmitter and let her live her life in relative privacy. We learned a lot from her, and she has made an important contribution to knowledge about how a rehabbed snowy owl behaves as it acclimates to the wild. She got a quick health check by the vets at the Maryland Zoo, who cleaned up an abrasion on her back but found her otherwise in good shape, and she was quickly rereleased right where she had been trapped. 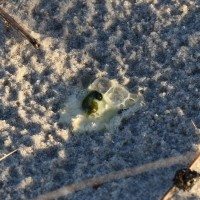 Photographer Allen Sklar sometimes takes those not-so-artistic shots to help us monitor the health of Delaware. That’s a healthy “mute” (the polite term for raptor poop).

In the month that we tracked her, she toured the coastal bays bordering the Maryland-Virginia state line and demonstrated that she still had what it takes. So far, Delaware’s stayed put on Assateague Island, to the delight of birders. Allen continues to monitor her behavior regularly, and from everything we can see, she’s doing well — a great payoff for all the hard work by the vets, zoo staff and rehabbers over the past year.

20 Comments on “A New Chapter for Delaware”