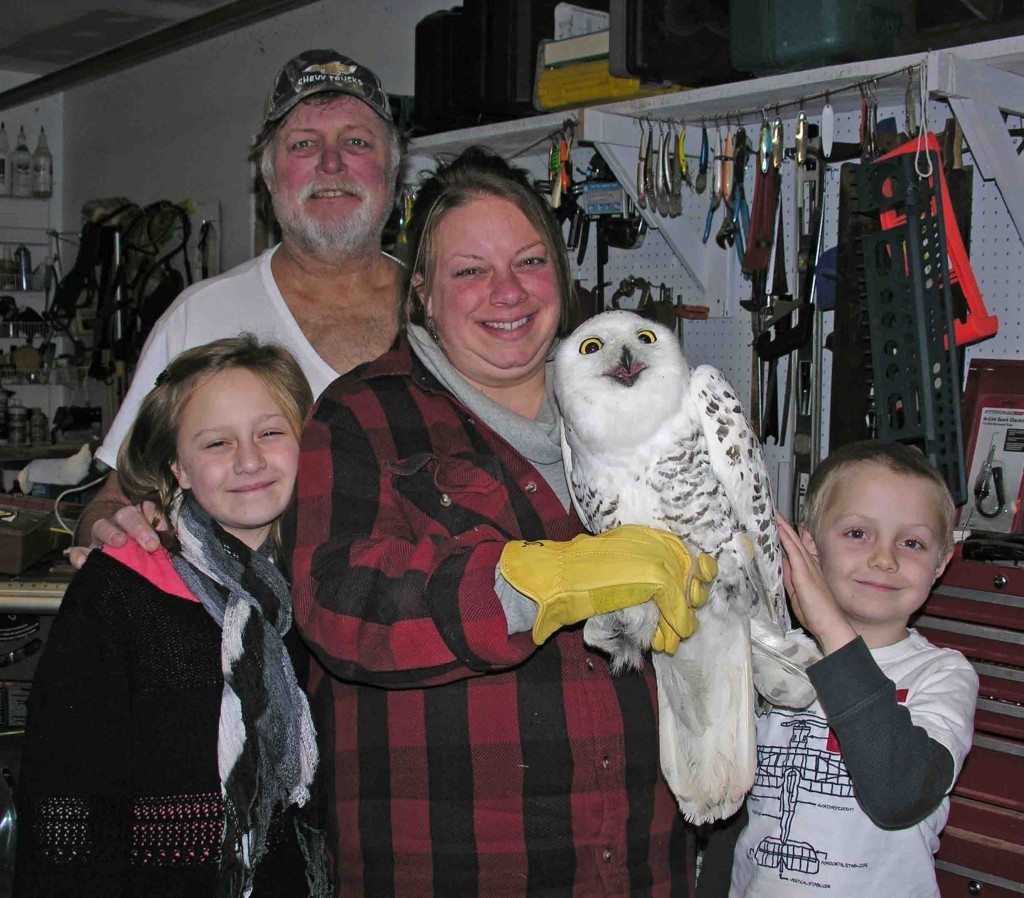 Bob and Kathy Gallagher, who with their kids have been assisting Tom McDonald with his snowy owl research in upstate New York for years, hold Flanders — the first tagged owl of the 2015-16 season — before her release. (©Tom McDonald)

The 2015-16 season of Project SNOWstorm is off to an exciting start, with our first new owl of the winter — and the return of one of the very first snowies that we tagged two years ago.

It’s an area SNOWstorm fans got to know last winter, because it’s just a short distance from where Tom tagged the adult male known as Chaumont in January 2015.

Tom dubbed this bird “Flanders” — not because he’s a “Simpsons” fan, but because she was caught not far from Flanders Road. 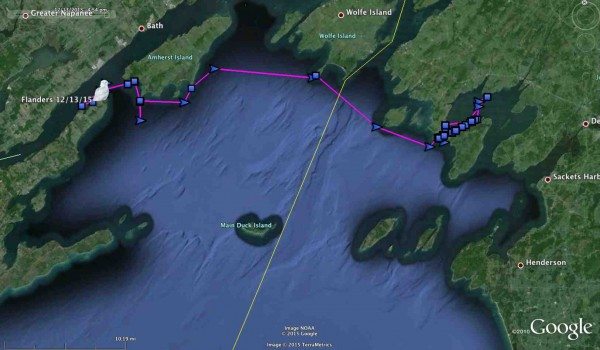 Since being tagged on Dec. 8, Flanders has been moving west along the northeast shore of Lake Ontario. (©Project SNOWstorm and Google Earth)

This area around Chaumont Bay, west of Watertown, NY, has been one of the most productive sites in upstate New York for Tom’s banding work with snowy owls over the years. It’s also the home of his friend Bob Gallagher.

“For many years, he and his wife Kathy have been immensely helpful and gracious with their time, home and heated garage. We have banded so many owls there that in 2013, we designated their home as ‘snowy owl central,’ ” Tom said.

That’s where they processed Flanders, too, with the Gallaghers’ kids lending a hand — always a good way to encourage the next generation of owl researchers.

After her release, Flanders hung around Point Peninsula for a couple of days, then headed across the border, touching on Wolfe Island and Amherst Island (two world-famous spots for winter owls), then continuing west to the eastern shore of the Prince Edward County peninsula. We’ll be adding an interactive map for her in the near future.

Flanders is the first owl also to carry one of Cellular Tracking Technologies’ new 3G transmitters, which (along with a number of other improvements) will be significantly more energy efficient than the older models. We’ve already seen the much greater battery life, despite a lot of cloudy, foggy weather over the region in recent days.

While we’re excited about Flanders, we were also a bit stunned last month to hear from a long-lost study subject — Buena Vista, the second owl we ever tagged, just as SNOWstorm was getting underway.

Buena Vista was trapped Dec. 23, 2013, by Gene Jacobs from the University of Wisconsin-Stevens Point, Mike Lanzone of CTT and Mike’s wife, Dr. Trish Miller of University of West Virginia. They caught the then-juvenile male in the Buena Vista Wildlife Area of central Wisconsin, whose grasslands are famous for the state’s largest prairie-chicken population.

BV (as we usually referred to him) stayed put there all winter, and we last heard from him on March 31, 2014, after which we assumed he migrated north. 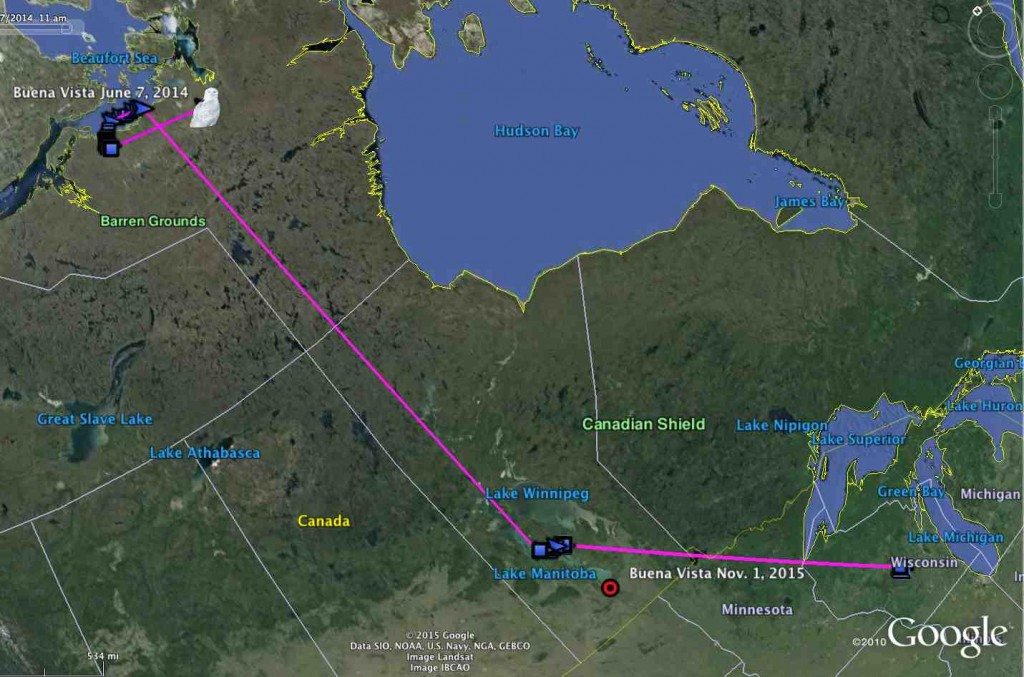 From his tagging point in central Wisconsin, Buena Vista moved first to southern Manitoba, then to northern Nunavut in the early summer of 2014. (©Project SNOWstorm and Google Earth)

We didn’t hear from him at all last winter. That could have been because snowy owls don’t necessarily come south each year, and if they do, they might not go far enough to reach good cell coverage. Or, as a young bird, he simply might not have survived the intervening year.

But at the beginning of last month, Buena Vista connected to a cell tower just south of Lake Manitoba, in Manitoba about 70 miles (113 km) north of the North Dakota border.

He didn’t have much of a cell signal, and only sent a small batch of his backlogged data; it will take a number of such connections to upload the thousands of locations his transmitter should have stored over the past 20 months.

But what we got was interesting enough. His last location in Wisconsin was April 1, 2014, after which there is a gap of almost a month in the data. On April 30, BV was 664 miles (1,069 km) northwest of the Buena Vista grasslands, near the town of Gypsumville, in the interlake region of southern Manitoba, between Lake Manitoba and Lake Winnipeg.

From there, he flew another 1,106 miles (1,780 km) north to the edge of the Beaufort Sea in northern Nunavut, moving out onto the ice and cutting a wide curve around the Keith Islands, then angling back southeast about 100 miles (322 km), into the barren-grounds lands near Bromley Lake and the Back River — a place of musk-oxen, grizzly bears and caribou. (And industry — there is an enormous open-pit gold mine just 70 km [44 mile] away.)

The last data in this transmission was from June 7, 2014. Interestingly, we already knew that later in that same summer the owl we dubbed Braddock was only about 50 miles (80 km) to the northeast, closer to the coast.

Unfortunately, we haven’t heard from Buena Vista again. It may be that the fast-shortening day length up there has taken his battery charge too low, or (perhaps most likely) he’s moved some place out of cell range. If he moved toward Winnipeg he’d hit a region with dense cell coverage — but owls don’t know that.

But while we wait, there’s another interesting tidbit — the spot where Buena Vista checked in last month, on his way south, is at the southern tip of Lake Manitoba, only about 100 miles (322 km) south of where he stopped on his migration north in the spring of 2014. He seems to like using that corridor up through Manitoba and the west side of Hudson Bay, the kind of insights into owl behavior that make this research so fascinating.

Now that things are heating up on the owl front, we’ll be posting a lot more frequently, so keep an ear to ground for a lot more news about what our tagged snowies (old and new), and our many collaborators, are up to. It should be an exciting season ahead.

On the Shoulders of Giants
A Big Year? The View from the Arctic