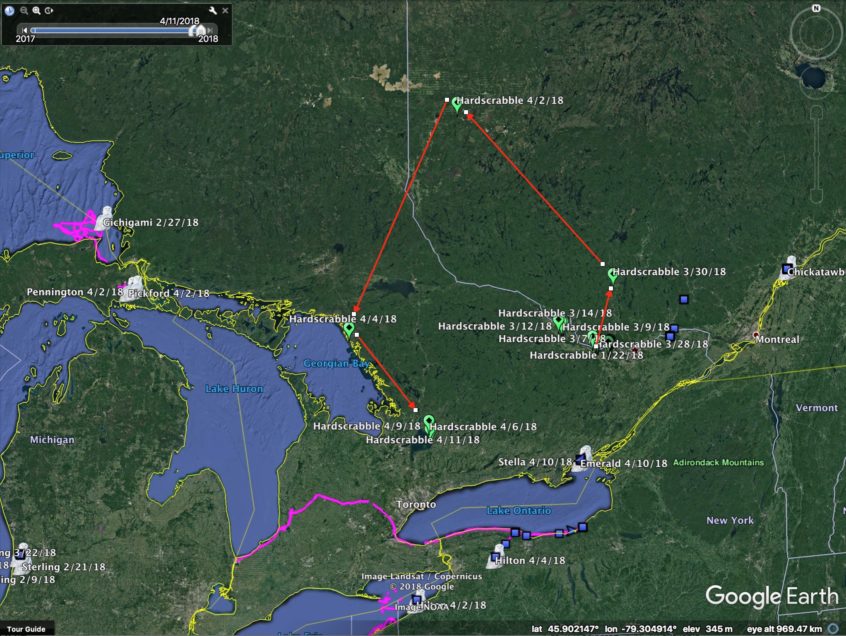 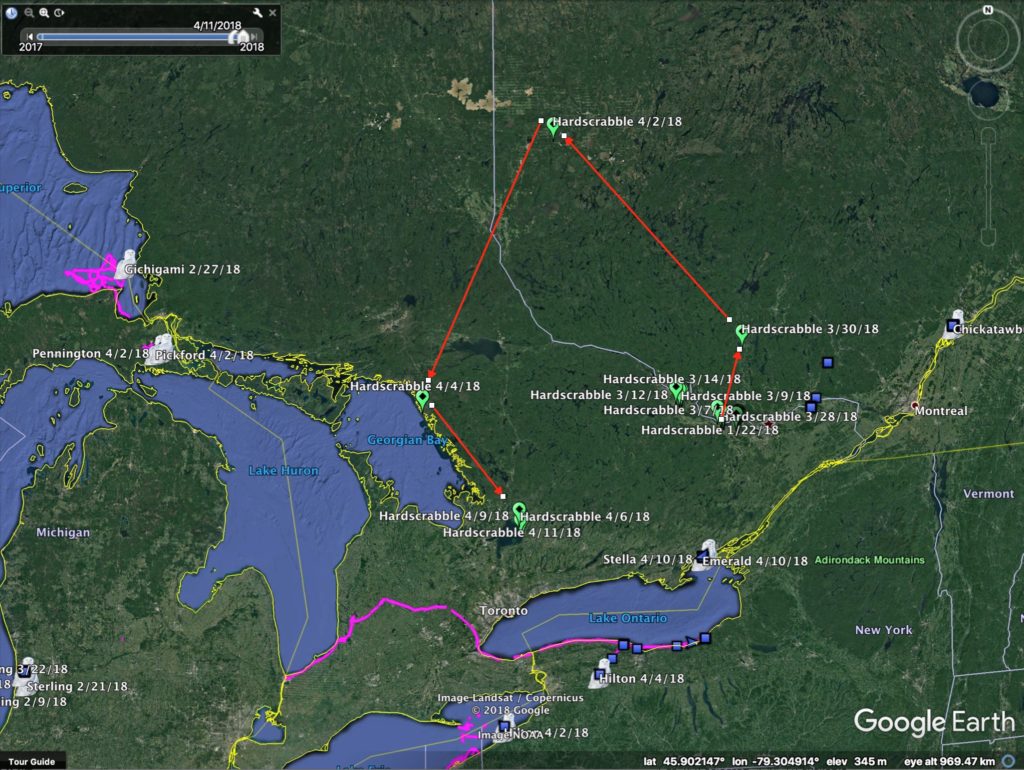 North, then not: Hardscrabble (in red) makes a loop across Quebec and Ontario. (©Project SNOWstorm and Google Earth)

Spring is supposed to be when snowy owls head north. Tell that to Hardscrabble.

This veteran owl, now wrapping up his third year of being tracked, took off last week as he’s done in previous winters, heading up through southwestern Quebec…until he reversed course. April 2 he was northwest of Val-d’Or, but two evenings later he’d flown 326 km (202 miles) southwest to the shore of Georgian Bay, and two nights after that he was on Lake Simcoe, in the pinch of southwestern Ontario that lies between the Georgian Bay and Lake Ontario — farther south than he’s been all winter!

Why? Well, we can make some guesses; maybe the weather (especially contrary winds) turned him back. But the fact is, we don’t know a lot about a lot, so to speak, when it comes to these birds. Hardscrabble’s really the only one who knows why he swapped ends and headed south again. But it’s surprises like that that make this work so interesting.

Still, we’re seeing more and more movement by owls that have been sedentary all winter. On Amherst Island, Stella has been all but locked into her territory on the south shore, where she became a local celebrity with birders, photographers and locals. Except for days spent offshore on ice, she never left the 43 ha (107 acre) swath of island shore. But on April 10 she headed out, and the next evening she was 73 km (46 miles) north, halfway between Lake Ontario and Hardscrabble’s former territory on the Ottawa River. (Emerald hasn’t made similar moves — yet.) 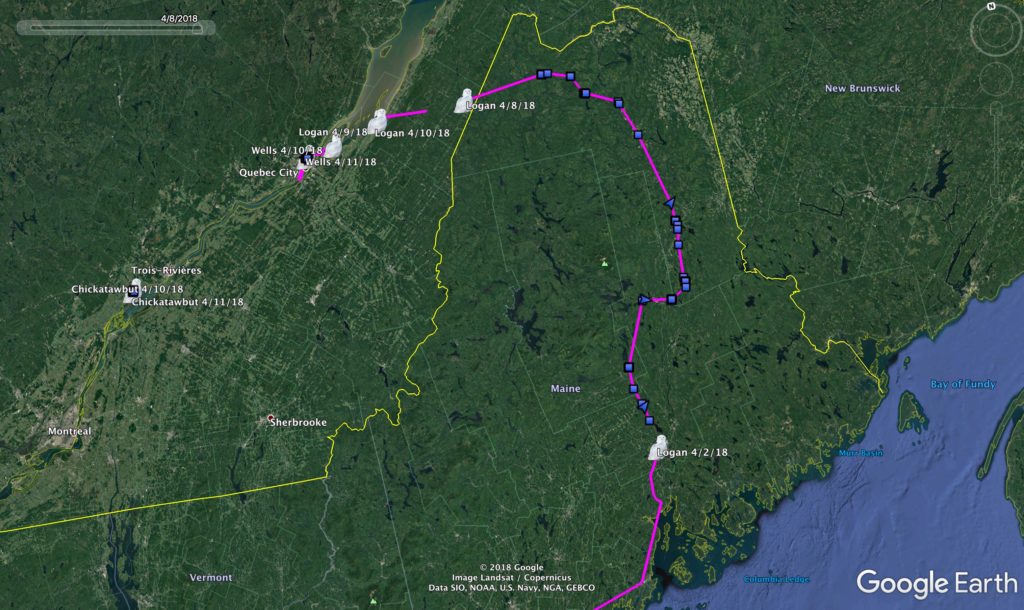 Logan made a big sweep across the emptier quarters of Maine last week and into the St. Lawrence valley, not far from Wells. (©Project SNOWstorm and Google Earth)

Logan had started north last week, and since then this adult female carved a curving route through some of the emptier parts of Maine. After making a brief stop at the Millenocket airport, she looped north and then west across “the County,” as Mainers refer to enormous Aroostook County, over the Allagash and St. Johns rivers, and into southern Quebec. Since April 9 she’s been on the south shore of the St. Lawrence by Montmagny, QC.

Just upstream from Logan, Wells had briefly shifted off her winter territory in Quebec City out to L’île d’Orléans, but then left the island and scooted back to her bailiwick again. And still farther up the St. Lawrence, Chickatawbut remains snug in her wintering spot.

Hilton, however, has also been on the move. Since April 4 she’s left Lake Erie, flown back to the south shore of Lake Ontario, then flown northeast across the Ottawa River valley. By April 8 she was in southern Quebec near the town of Amherst — a flight of some 540 km (340 miles). 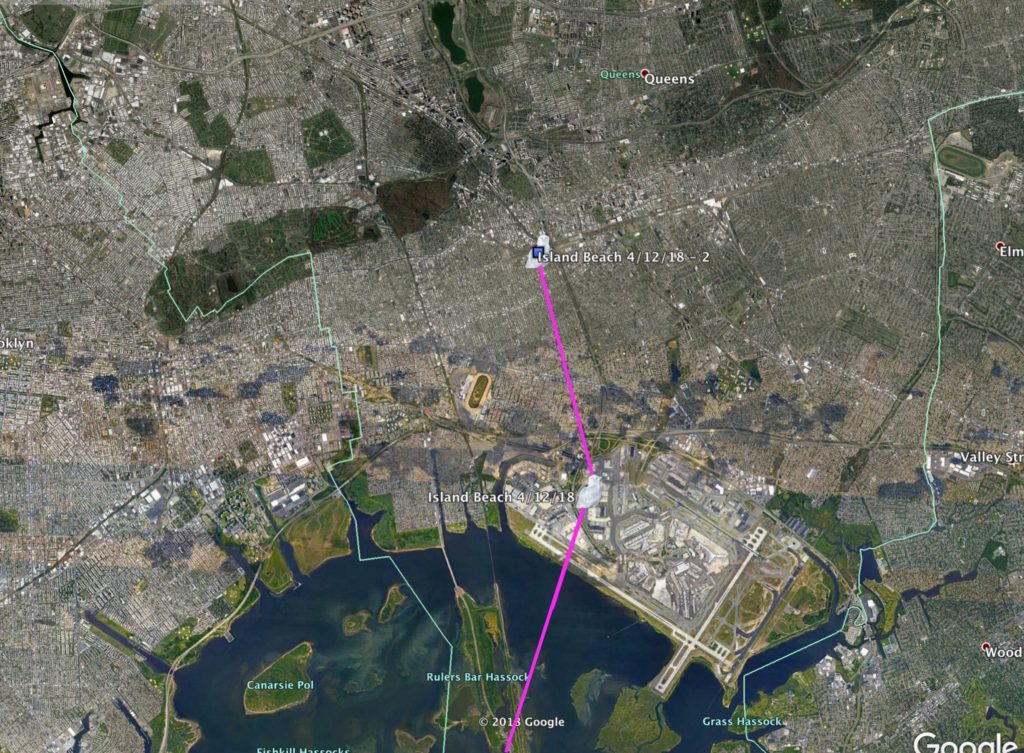 Away from the Jersey Shore, Island Beach stopped at JFK Airport today, but by evening was along the Long Island Railroad. (©Project SNOWstorm and Google Earth)

Down along the Atlantic coast, Sinepuxent is still near Atlantic City, NJ, but Island Beach has finally left the Jersey Shore and earlier today was perched on a hanger at JFK Airport on Long Island. By evening, though, he’d left those big, dangerous birds for the tracks of the Long Island Railroad. Lenape flew way back north again from Virginia and Maryland, crossing Delaware Bay and moving halfway up the New Jersey coast to Barnegat before turning around and flying south to Holgate. All that bird has done, all winter, is roam, and it will be fascinating to finally calculate how many hundreds and hundreds of miles he will have accumulated under his wings before he leaves. In 70 birds and four winters, we’ve never had one as relentlessly restless as Lenape.

In the Upper Peninsula, Pickford is holding tight but Pennington has been showing some restlessness, though no major moves. We’ve heard nothing from Gichigami since the end of February, when she was out on Lake Superior ice; that doesn’t bode well, but we’ll have to see if she reappears. Sterling is still north of Holland, MI, but we’re not getting a lot of data from his transmitter, which hasn’t been getting much solar recharge.

In Wisconsin, Straubel has made the first move out of her territory since she was relocated there from her namesake airport in mid-January. She didn’t move far — just 19 miles (30 km) north of Stevens Point, and she flew partway south again — but it’s another sign of growing restlessness. Meanwhile, her neighbors Austin and Bancroft are sitting tight, as is Badger southwest of Green Bay. Arlington, on the other hand, is wandering around eastern Minnesota, and on April 11 was in the town of Cambridge, about 40 miles (65 km) north of the Twin Cities.

In North Dakota, Pettibone hasn’t shown any signs of wanderlust, while Ashtabula continues to meander over the prairie. As of April 4 he was near Linton, ND, having come within a few miles of the South Dakota line.

Finally, for some fun, here’s a great video that PBS in Boston did about our good friend and SNOWstorm co-founder Norman Smith — enjoy! (And, um, ignore the bit about snowy owls eating insects…anyone can make a mistake.)

2 Comments on “North (and South) – but Mostly North”