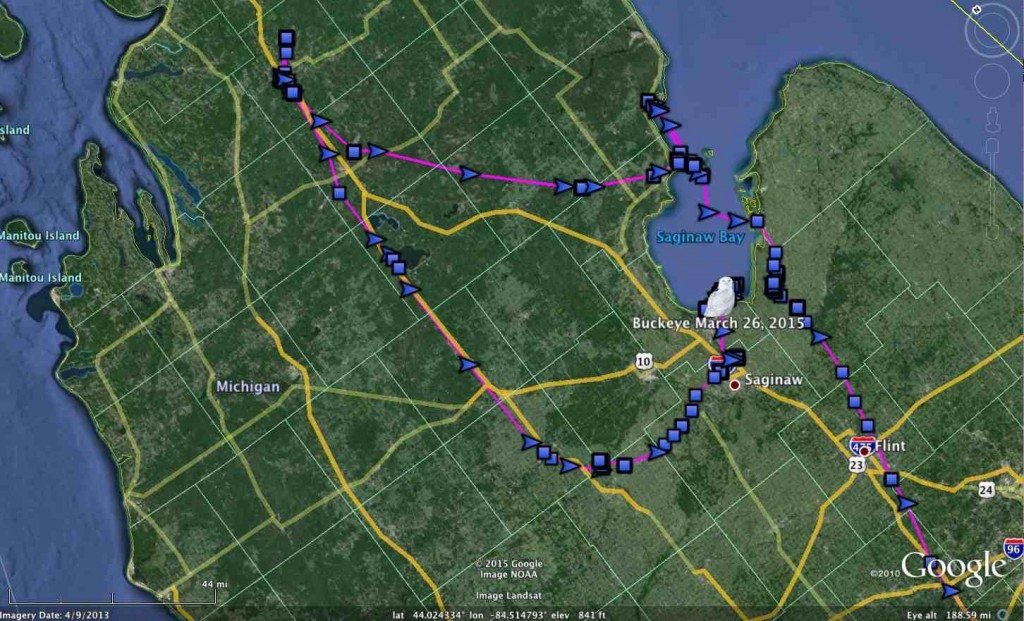 North, then south, then north — Buckeye’s been touring Michigan the past two weeks. North is to the upper left. (©Project SNOWstorm and Google Earth)

Last time we updated you on the movements of Baltimore, whose northbound migration included a stop in New York City.

But we’ve had some real surprises from our other tagged owls, too, some of whom can’t seem to figure out which direction they want to go. That’s not unusual as spring starts to come on, and the owls are feeling the restless urge to move.

Let’s start with the easy ones. In northeastern New York, Orleans left her winter territory astraddle I-81 a few miles from the Canadian border, and made a 24-mile (39 km) flight to the St. Lawrence River, spending time on the ice and crossing into Ontario to spend a day on Wolfe Island, before flying back to her home base, where she remained March 26 when she checked in.

Millcreek has been regular as clockwork on his winter territory in Toronto, and after spending three months within sight and sound of the big international airport there, remains a very good owl by studiously and scrupulously avoiding it.

Likewise, Chippewa and Whitefish Point remained on their neighboring territories on the Upper Peninsula of Michigan, although they were doing what — for them — was some rambling.

Whitefish flew about 6.5 miles (10.5 km) to the west, and then back home again, while Chippewa, who had never gone more than a quarter mile (.4 km) in the past, made a quick flight of about two miles (3.2 km) beyond the town of Pickford, and then also back. It’s not epic movement, but it suggests even these two stay-at-homes are feeling spring.

Geneseo, who moved from eastern New York to the southern toe of Lake Huron March 19, didn’t connect last week, presumably because he’s out of cell range on the dwindling ice sheet. Hopefully he’ll send at least one more transmission before he moves beyond the cell network range, which doesn’t extent much farther than the north shore of Georgian Bay — an area several owls used last spring as a pathway north.

The last time Buckeye connected on March 12, she’d been just north of Bowling Green, Ohio, and I speculated last time that she might have moved onto Lake Erie or Lake St. Clair and out of cell range. I had the right idea, but the wrong lake — she had, in fact, flown due north and moved out onto Saginaw Bay in Lake Huron, which is why she failed to check in March 19.

On the 26th, though, she was back on land and uploaded all of her backlogged data, suggesting an owl that knows she wants to move, but isn’t sure yet where to go.

From her position in northwestern Ohio, she moved almost due north, passing through Ann Arbor and just east of Flint, lingering a bit on the farmland of Tuscola County before hitting the lake on March 18. She moved north to Tawas, Michigan, then reversed course. Just offshore of Au Gres, you can see the typical signature of an owl riding on floating ice — a series of very precisely spaced locations as the ice floe or plate she was on drifted south with the wind.

From there, Buckeye flew inland and northwest again, past Grayling and finally stopping at the town of Gaylord, Michigan, where she moved between frozen Ostego Lake and a series of rooftops, a light pole at an athletic field, and the municipal airport (of course — this owl loves airports).

After passing a huge golf course complex north of town, Buckeye reversed course again and headed almost due south the night of March 21-22, flying about 115 miles (186 km) before curving east and north past Saginaw, and back to Saginaw Bay around daybreak on March 24. She was hanging around on the ice a few miles offshore of Essexville when she checked in March 26.

In all, Buckeye covered 573 miles (922 km) on her two-week jaunt. One of the cool elements of reviewing the data we get from the CTT transmitters is the elevation data; we know that much of the time Buckeye was flying within a few hundred feet of the ground, but that during her longer, sustained bouts of flying she was usually about 500 feet (150 m) high. For the most part, her longest flights lasted about an hour and half each; mostly, though, she’d fly for half an hour or so and then stop. 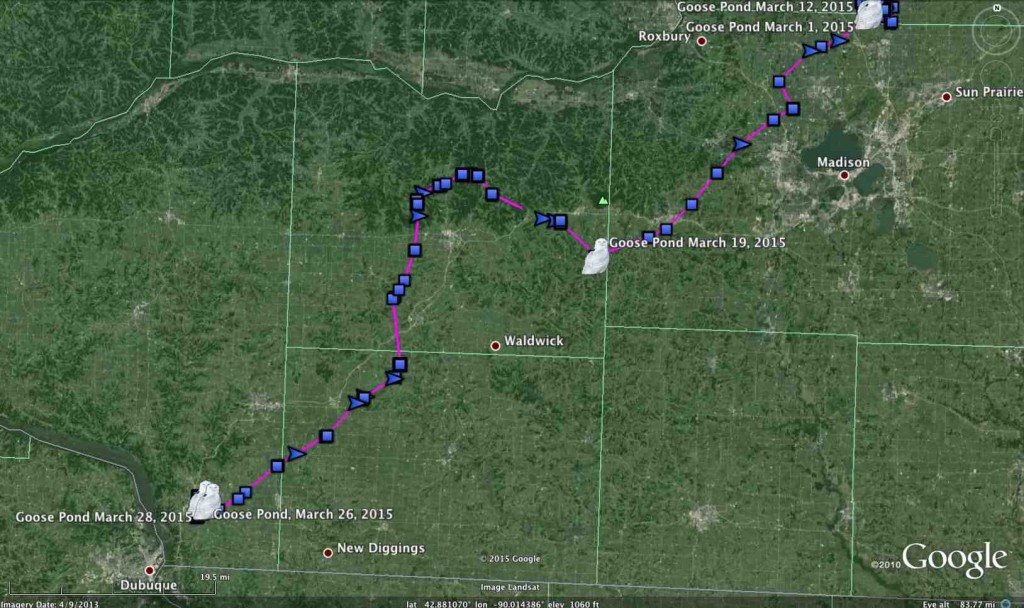 Goose Pond — did he get cold feet before getting to the Mississippi, or will he become our first tagged Iowa owl? (©Project SNOWstorm and Google Earth)

Finally, we have Goose Pond, who on March 19 had moved around Madison, Wisconsin to the eastern edge of Iowa County. Maybe there’s something about Iowa that attracts him, because the owl then headed southwest, fetching up March 26 outside Kieler, WI — just a few miles from the Mississippi River, with Dubuque, Iowa, beckoning on the far shore.

Will we get our first tagged owl in Iowa? Goose Pond’s transmitter checked in again on March 28, and he was still near Kieler, so maybe he will think twice about this southerly excursion. But as with Buckeye and some of the other birds, it’s clear that spring wanderlust has hit, even if the owls’ instincts and hormones haven’t quite given them the signal to start flying straight back to the Arctic.