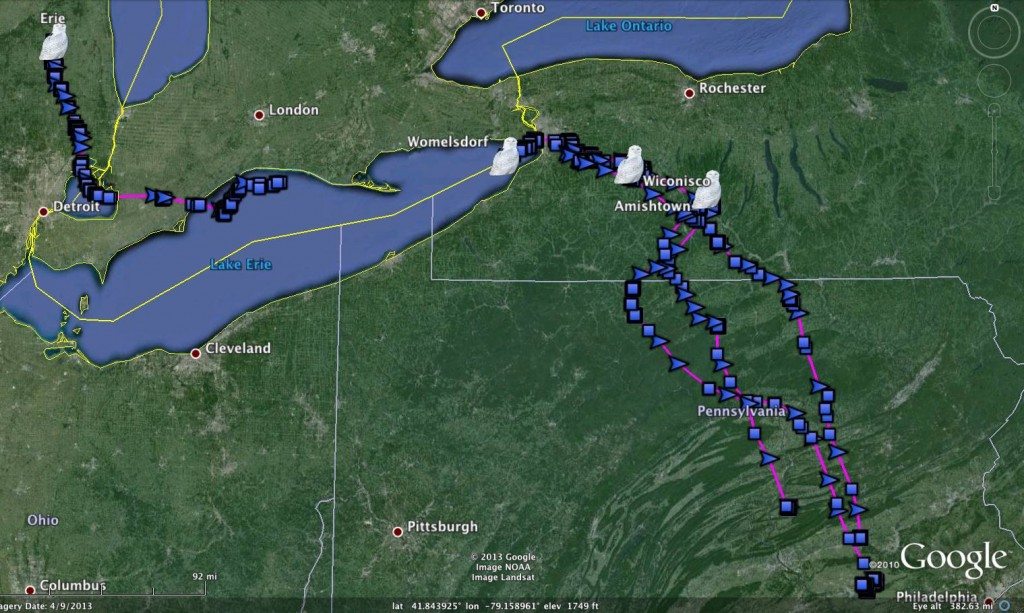 Spring is coming, and the owls are leaving — four of the Pennsylvania-tagged birds all made significant northward flights in the past week. (©Project SNOWstorm and Google Earth)

There’s no longer any doubt that spring is working on our cadre of tagged owls. Four of them have made dramatic northward movements — and three of them have shown the kind of striking similarity in their paths that seems unlikely to be a coincidence.

Four of the five Pennsylvania owls — Erie, Amishtown, Womelsdorf and Wiconisco — have moved hundreds of miles north into New York and Michigan in the past week. (The fifth, Millcreek, has been out of cell contact since he headed out into Lake Erie’s ice sheets Feb. 26.)

Erie is the farthest north, having flown west across Lake Erie, up Lake St. Clair and into Sanilac County, Michigan, in the “thumb” of the state about 75 miles north of Detroit. Except for Saginaw Bay, the west shore of Lake Huron is largely ice-free, so this most ice-happy of our snowy owls may be land-bound for the near future.

I’m fascinated to see how all three of our Pennsylvania farmland owls (Amishtown, Womelsdorf and Wiconisco) have moved in fairly tight concert on a slightly northwesterly track into Steuben County, New York. Then Womelsdorf and Wiconisco hooked left and went right through Buffalo, with Wiconisco reversing course and backtracking about 30 miles from the city, while Womelsdorf flew right through downtown Buffalo and out onto the frozen eastern end of Lake Erie.

This is also the first time we’ve been getting altitude and flight speed data from owls on what is clearly migration, instead of local movement — one of the tremendous advantages of these GPS/GSM transmitters. Here’s a segment of Wiconisco’s flight, from Dauphin County to Tioga County in Pennsylvania:

The elevation profile for Wiconisco (read right to left) shows him climbing gradually as he crosses into the Allegheny High Plateau, flying up to 1,400 feet above the ground (©Project SNOWstorm and Google Earth)

You can see how he climbed gradually to a maximum altitude of 2,289 feet above sea level — about 1,400 feet above the ground as he approached the Allegheny High Plateau. As the ground rose beneath him, he lost a little altitude so that he was soon cruising just a few hundred feet over the flat-topped mountains, finally coming down at the Grand Canyon Airport near Wellsboro, PA.

Amishtown’s track (below) shows a bird that hugged the ground a bit more, rising and falling as ridges and valleys appeared beneath him, generally staying within a couple hundred feet of the ground. You can see two stops in valleys, including one along the west branch of the Susquehanna at the Williamsport Regional Airport. 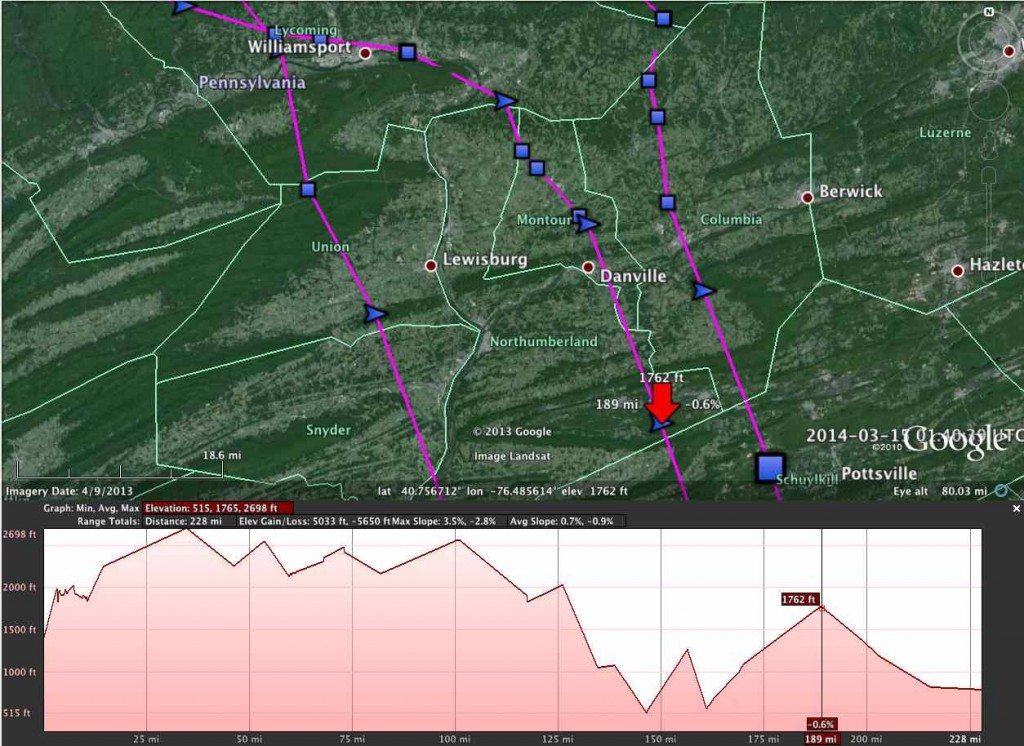 Most of the winter we’ve been using a duty cycle (the program that tells the transmitter how often to record a GPS location, and when to dial up the cell network to transmit the accumulated data) that takes a GPS reading every 30 minutes, 24 hours a day. But CTT’s transmitters can record 60 times that much data — one location every 30 seconds.

We’ve been anxious to try this, although we knew such a duty cycle would be a challenge for the solar recharge system. But the transmitter on our final 2014 owl, Monocacy, has had an especially robust charge. So on Friday, the team at CTT uploaded an experimental duty cycle to our final tagged owl of the season, Monocacy. (This immature female was relocated from the Martin State Airport in Maryland two weeks ago and immediately flew back to Baltimore, though thankfully not to the airport again.)

At night, her transmitter is now recording a GPS fix every 30 seconds and transmitting every morning, giving us an extraordinary level of detail into her nocturnal movements. She’s remaining very much an urban owl, staying within the Baltimore metro area. Before dawn Sunday morning she flew south across the Inner Harbor to Wagner’s Point, then after dark last night flew back up the harbor and made a big loop to the northeast, along the Back River and into the Elwood Park neighborhood north of Patterson Park. 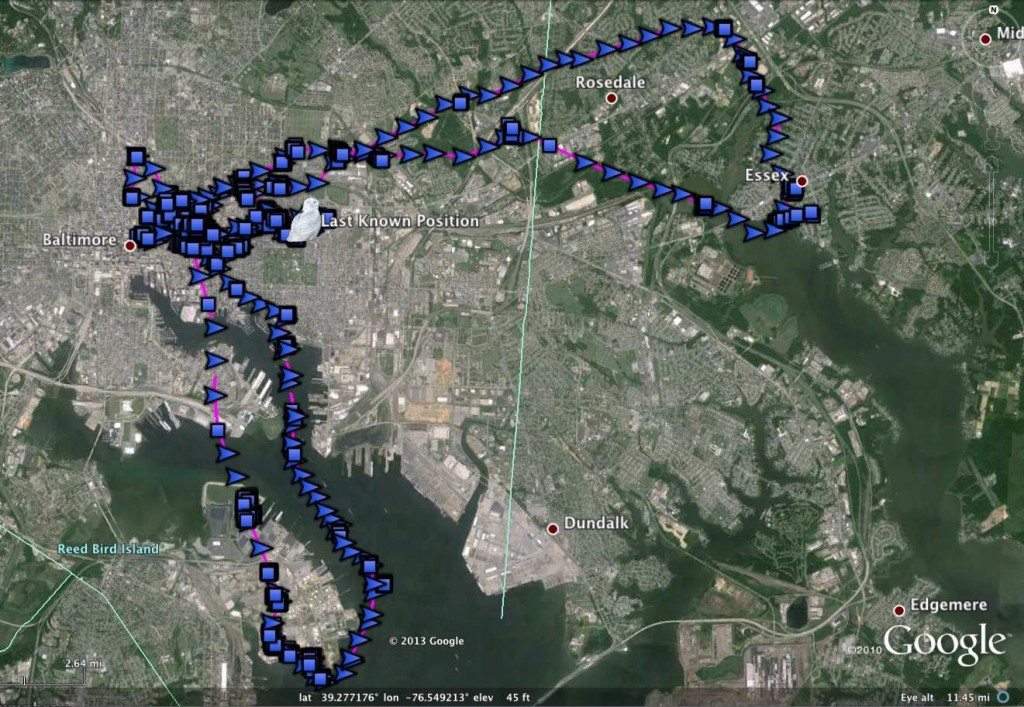 It’s interesting that this owl, which is the most southerly of the birds we’re tracking, hasn’t shown any movement to the north. SNOWstorm collaborator and veteran snowy owl researcher Norman Smith has found that most snowy owls depart Massachusetts from about March 19 to April 14, so she has some time.

We’ll still update Monocacy’s map every third day, and we’re trying to decide how best to present this fire hose of incoming data from her — more about that soon. Last Friday’s updates for the other owls will be posted later today — many of the birds I haven’t had room to discuss here are also doing remarkable things in their own rights, as you’ll see if you explore the updated maps.

When an Owl Goes to Church
Busy week!