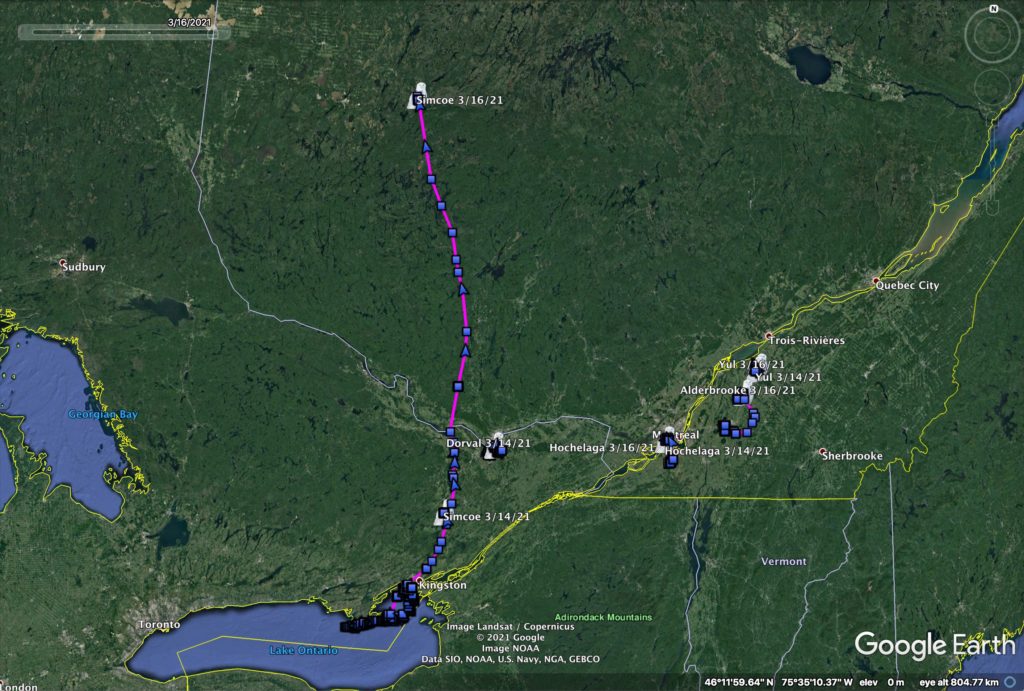 While most of our St. Lawrence/Ottawa river valley owls remain on territory, Simcoe is already heading north. (©Project SNOWstorm and Google Earth)

In the past two weeks, spring has begun to exert itself in many parts of North American (with apologies to our friends in Colorado and Wyoming who just got walloped by an historic snowstorm). But the longer days, higher sun and milder temperatures have prodded some of our tagged owls into migration, and there’s a lot to catch you up on — including a three-owl pile-up in southeastern Saskatchewan, and an island girl who is almost out of cell range already.

First, some good news. In our last update I mentioned our concern about Alderbrooke in southern Québec, given reports of a snowy owl hit by a vehicle pretty much exactly where Alderbrooke has been hunting this winter. At the time, we were in a three-day window each week without data transmissions, so we couldn’t be sure what had happened. Assuming the report was accurate, it thankfully wasn’t her — judging from her movements she’s apparently fine, although she did move about 30 km (20 miles) northeast, to near Saint-Edmond-de-Grantham, QC. 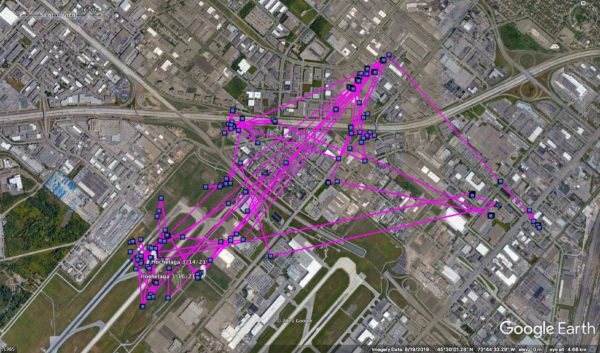 Bad boy; Hochelaga has been taking risks, hanging out next to the runway at Montréal’s airport. (©Project SNOWstorm and Google Earth)

That puts her only 28 km (17 miles) from Yul, who remains near Baie-du-Febvre, QC, on the south shore of the St. Lawrence. Just to the west, our feathered boomerang Hochelaga did indeed return to the Montréal airport, from which he’d been relocated into southern Ontario, as we feared he was doing. He spends a worrisome amount of time on the airfield itself, flying back and forth across the runways and taxiways, and evading attempts by Falcon Environmental to recapture him. 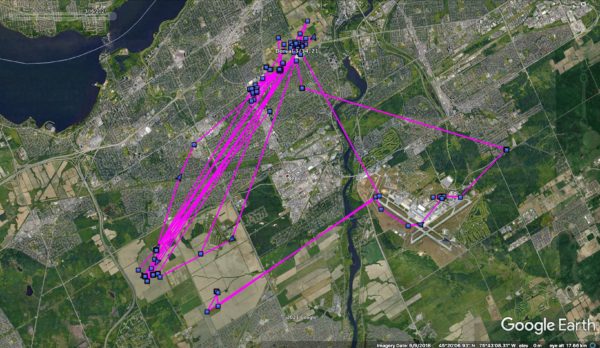 Good girl; except for one quick visit, Dorval has remained away from the Ottawa airport. (©Project SNOWstorm and Google Earth)

Over in Ottawa, Dorval spent part of March 11-12 at that airport, but as she has most of the winter, is primarily hunting the two large areas of open space in this urban environment, the old Central Experimental Farm and the former Greenbelt Research Farm.

Down on Amherst Island, however, Simcoe obviously felt the pull of spring. March 14 she began moving steadily north, crossing into Québec just west of Ottawa and flying 482 km (300 miles) over the next two days. Tuesday night she was in an isolated area of boreal forest about 33 km (20 miles) southeast of Senneterre, QC, and about halfway to the southern end of James Bay. Depending on what route she continues to take, there aren’t a lot of cell towers north of there, and we may not hear much more from her this season. 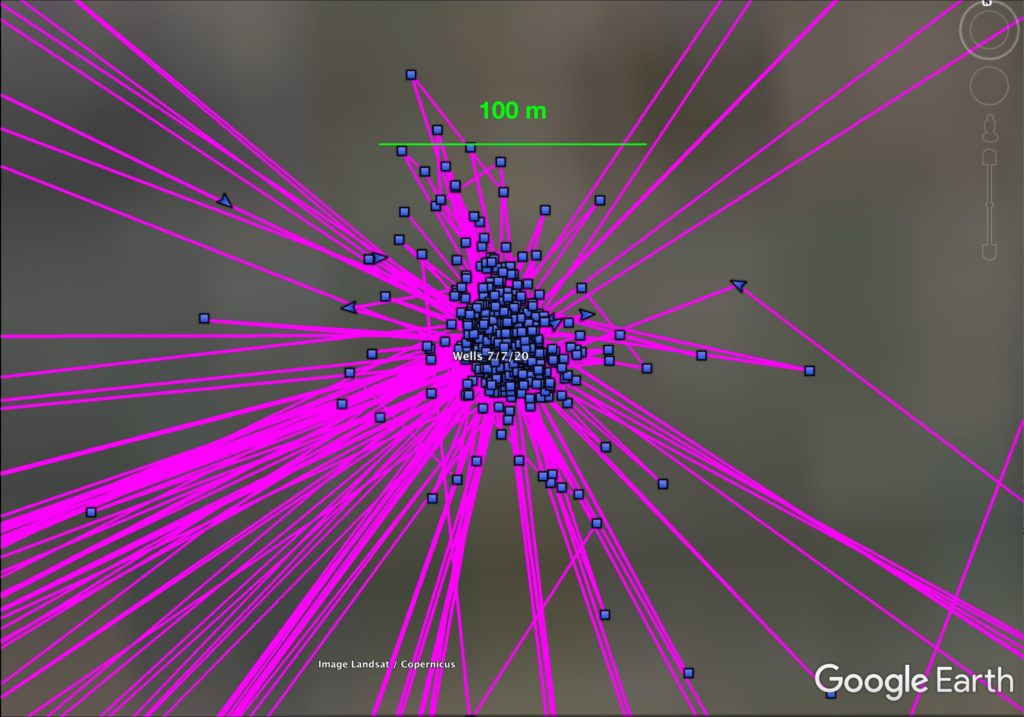 Clear as a bell: Wells very obviously nested this past summer. (©Project SNOWstorm and Google Earth) 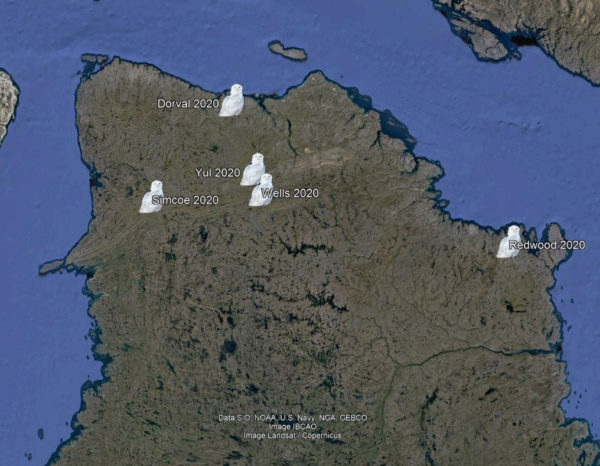 Nest locations for the five SNOWstorm owls that bred in the Ungava Peninsula last summer. (©Project SNOWstorm and Google Earth)

We’re still not sure where Wells is wintering, since we have yet to get current location data from her, but the other night she uploaded a further 6,000-plus data points, thanks to her strengthening battery. We’re hopeful that soon she’ll be fully caught up. This new data dump covered the period from early July through early November, and confirmed our earlier suspicion that she, like four other of our tagged owls (Yul, Dorval, Redwood and Simcoe) nested in the northern Ungava Peninsula last summer. Field observations from that region were sparse because of Covid-related travel bans, but we know that lemmings were abundant last summer around the community of Salluit, at the northern tip of the Ungava, and it seems likely to have been the case across the region. 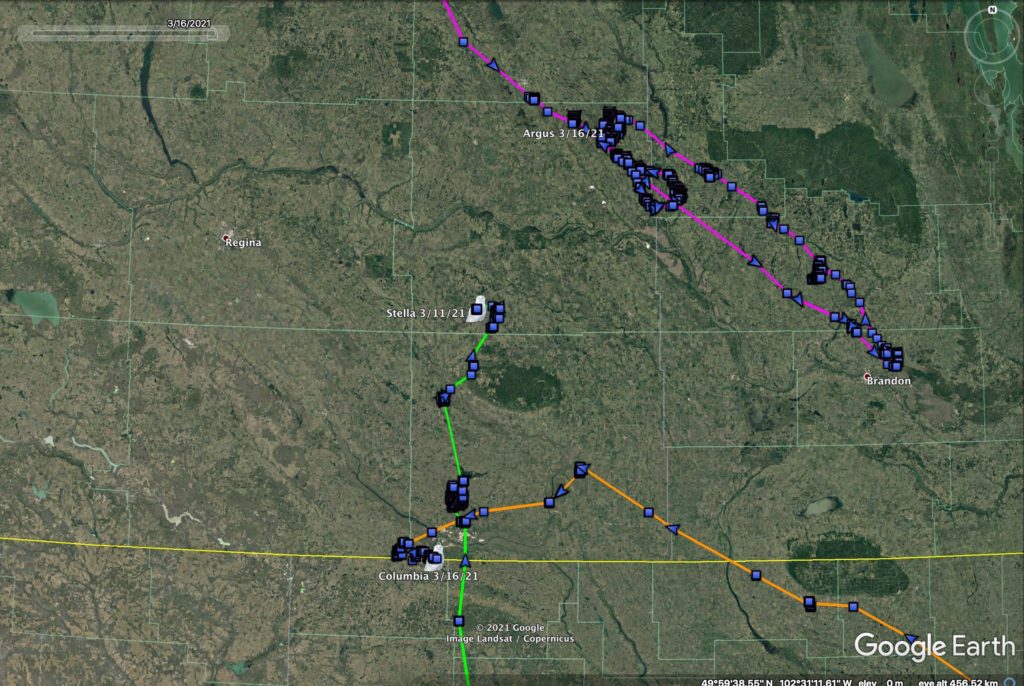 Columbia, Stella and Argus are all in southeastern Saskatchewan. (©Project SNOWstorm and Google Earth)

Finally, out west all three our tagged owls — Stella, Columbia and Argus — converged on the southeastern corner of Saskatchewan in the past week or so. In Columbia’s case, she was just barely in Saskatchewan, being only 0.8 km (0.5 mile) from the North Dakota border. In all, she’s moved about 1,026 km (637 miles) since leaving her winter territory in northwestern Iowa at the beginning of March. 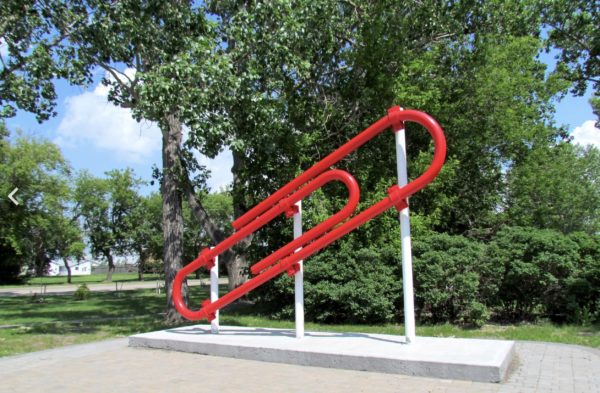 Yes, that is a giant paper clip. (Wikipedia/purecanucks)

Stella and Argus were both at opposite ends of Division No. 5 in Saskatchewan. Argus — who has been doubling back again and again on himself in recent weeks — was just north of Churchbridge, SK, while Stella was near the town of Kipling. And just to show that snowy owls always manage to find interesting places to visit (or, perhaps, that every place is interesting when you dig a bit into its history), Kipling is not only named for the English poet Rudyard Kipling, as one might expect, but it figures in the story of how, in 2007, a chap named Kyle McDonald, through a series of canny, cross-continental trades, parlayed a single red paperclip into ownership of a farmhouse in Kipling. It is a feat in epic barter that the town commemorated with a giant red paperclip statue.

Seriously, folks, it’s a fascinating world out there. You couldn’t make up this stuff.