To all the new readers who learned about Project SNOWstorm on NPR yesterday, welcome. We’re glad to have you, even if we were a little worried that the flood of traffic after the broadcast might crash the website.

We reached a milestone of a different kind Tuesday evening, when I tagged our 20th snowy owl of the winter. When the Project SNOWstorm team set a goal back in December of tagging at least 20 snowies this winter with GPS/GSM transmitters, from Minnesota to New England, it seemed unrealistic, both because of the expense and the effort involved — and it was only possible because many of our collaborators have worked incredibly hard, with terrific support from the public.

Getting these last owls has been tough, though. I’d suffered a string of buzzard’s luck the preceding week, chasing owls in several parts of eastern and central Pennsylvania. And my bad luck was despite a lot of help from fellow banders like Wayne Laubscher, and some high-octane assistance in the form of Dr. Eugene Potapov, one of the world’s leading experts on snowy owls and coauthor of the definitive work on the species, who generously met us several times to lend a hand.

Last night I opted to try for a new owl I’d just learned about, only a few miles from the Ned Smith Center for Nature and Art in central Pennsylvania — the institutional home for Project SNOWstorm. With my longtime banding subpermittee Sandy Lockerman and her husband Gary, and NSCNA education director Beth Sanders, we quickly found the lightly marked owl, secured permission to trap in the fields where he was sitting, and got the traps set.

We didn’t have to wait long. Within 10 minutes he glided down from the top of a tree where he was perched, landed on the ground to assess the situation, and came right into the bownet. As I raced across the muddy field to reach him, I saw the glint of metal, and realized with a shock that he was already banded. 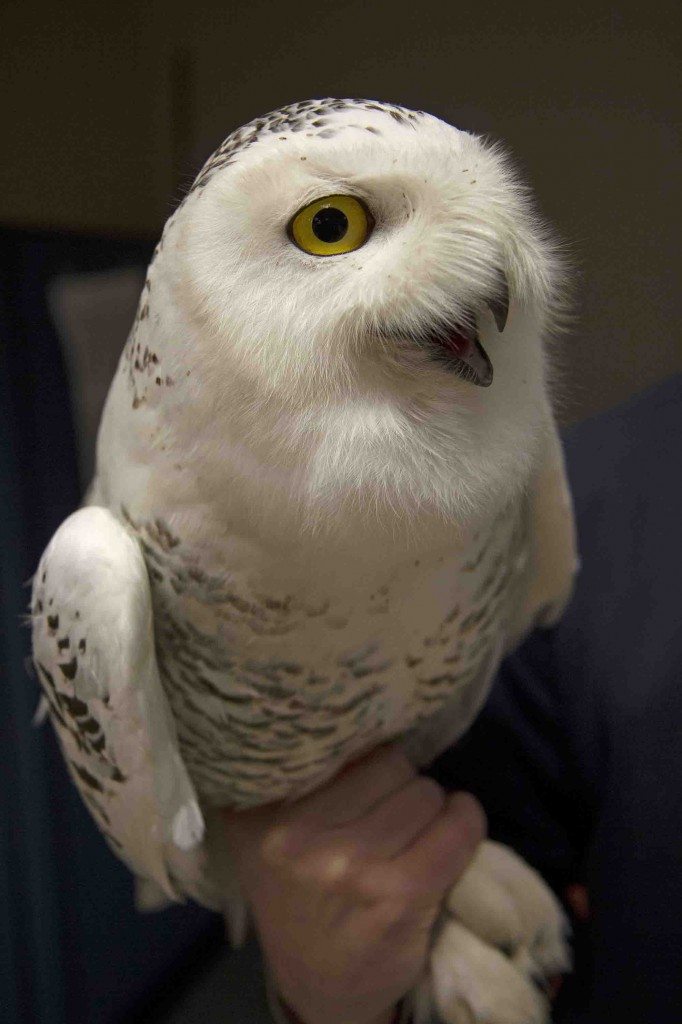 Same owl, different designation: On Jan. 31 he became 1098-00937, and was relocated from the State College, PA, airport (©Scott Weidensaul)

Not only that, but banded by me — I immediately recognized the band number, which doubled my surprise. This was an owl we’d caught Jan. 31 in State College, Pa., where it had been haunting the airport. Once we’d banded it and took blood and feather samples that night, the bird was relocated by the airport’s USDA Wildlife Services technician and released about 40 miles south of State College, away from dangerous airplanes.

He had obviously moved another 15 miles east on his own, crossing the Susquehanna River. And unlike our first encounter, when I had a transmitter that required a fairly large owl to carry it, this time I had a lighter unit that was ideal for his 1,742g frame (which was, to my surprise, 220g heavier than the last time we’d caught him).

We placed a quick call to the landowner, and as we were finishing up fitting the harness, the farmer, his wife and young daughter drove up, just in time for us all to carry “Wiconisco” — named for the creek that flows through this valley — to the edge of the field, just as the sun was setting. Sandy gave him a toss, and he flew far out into the valley with that deceptively quick, falconlike speed typical of snowy owls, then plunked down.

His transmitter just checked in tonight, and he’s staying pretty tight to his release site, hunting the same area where we found him. Barring any problems, we’ll post his first movement map on Saturday the 15th.

Speaking of maps, be sure to check out the updated maps for March 6-9, which went up earlier today for eight of the owls, including our first map for Plum.

As always, we’re delaying the release of map data by three days to protect the owls, and one bird (Womelsdorf) we’re not currently posting at all because of ongoing concerns about suspicious raptor trapping in his hunting area.

Be sure to check back on Saturday for the updates that are coming in this evening from the transmitters. Some of the first birds to check in have included a couple of very surprising developments, and we’ll have the first map for Wiconisco, as well as for Marshfield in Wisconsin and Oswegatchie in upstate New York.

Finally, thank you to everyone who contributed to SNOWstorm in the past day or two, largely as a result of the NPR story. We deeply appreciate it. If you’d like to help, you can make a tax-deductible contribution that goes directly and solely to the research by going to the Ned Smith Center’s website.