I was going to draw some sappy Valentine metaphor tonight, but the fact is, we feel like kids at Christmas every time the transmitters check in — and tonight in particular.

I was relieved to see that Amishtown is staying put in Lancaster County, at least for the moment. He’s wandered around a three-mile-by-three-mile area, but this evening was back not far from his release site, close to where several other snowies have been all winter. I hope he stays, and steers clear of the Philadelphia airport.

But the big news was the reappearance of Erie, who’s been off the grid for more than two weeks. We assumed he was out on the ice on Lake Erie — and man, was he ever!

Since he last checked in on Jan. 27, he’s wandered 276 miles around Lake Erie, crossing into Canada, looping around Long Point, coming briefly to land in the town of Hickory Beach, Ontario, and at 7 p.m. Friday was about a mile off Port Dover. This is the biggest movement of any owl we’ve tracked, and one of the most dramatic. 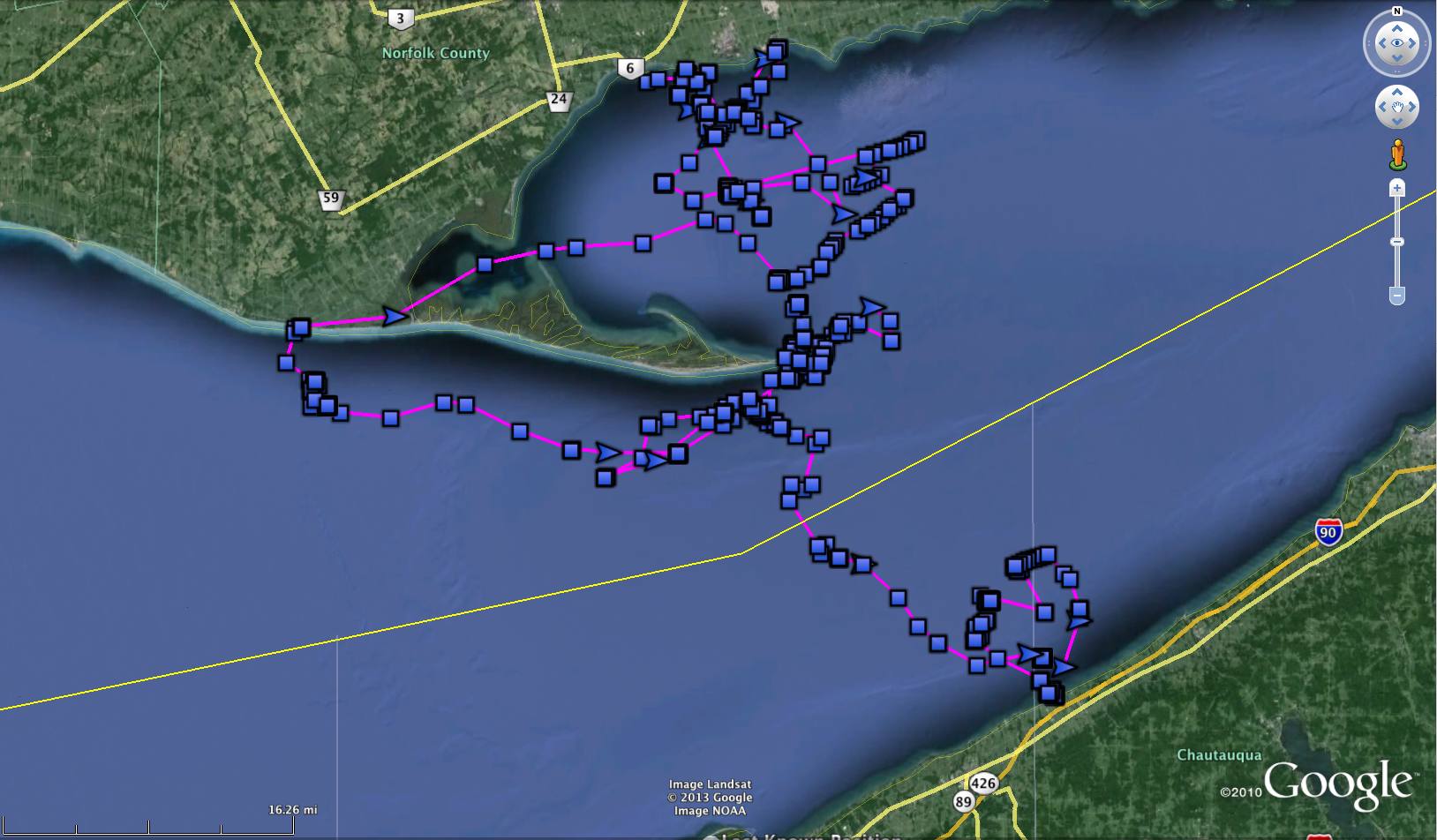 Millcreek, which had been hanging out almost exclusively at the Erie airport, also decided to get some ice time, moving in the past 24 hours out onto Presque Isle Bay and the Erie waterfront. 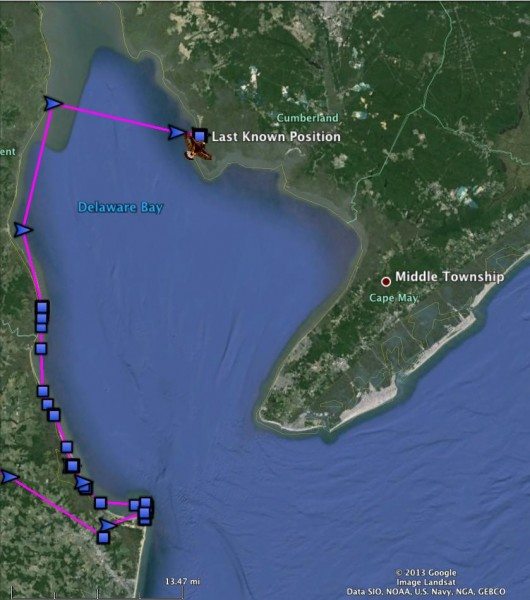 Henlopen’s track (including a bit that shows the transmitter being driven to Cape Henlopen Sunday). (©Project SNOWstorm)

Henlopen, one of our newest owls, failed to check in tonight. He was tagged Sunday at Cape Henlopen, Delaware, and by Tuesday evening had flown around the top of Delaware Bay into New Jersey. We’ve had some technical glitches getting his map up, but should have it soon — and with luck, we’ll hear from him on Monday evening with an update. 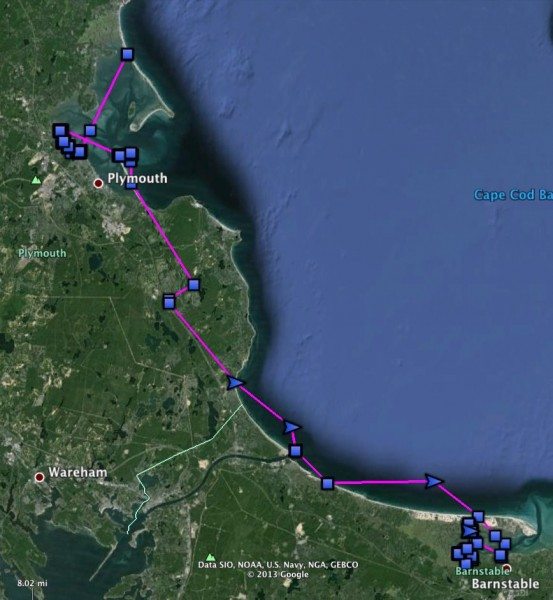 Sandy Neck’s movements over the past three days. (©Project SNOWstorm)

In Massachusetts, Duxbury has moved up the coast to Scituate, where she’s been fairly sedentary. Sandy Neck, on the other hand, left that beach where she was released last week, moved up the coast past Plymouth, and this evening was on Duxbury Beach.

Our Midwestern owls, in contrast, continue to stay pretty much where they’ve been. Kewaunee, Freedom and Ramsey are proving to be real homebodies, with very clearly delineated, rather small ranges. It’s obvious that their winter territories are providing them with what they need — but the excellent condition of all these owls suggests they’re eating very well, whether they’re on the coasts or inland.

So why the huge differences in the distances some of these birds are moving? I suspect it may be an inherent difference in the landscapes they inhabit.

On the coast, the habitat is linear and more or less continuous; there are few limits for an owl on the move, and when they start flying, there’s not much to stop them.

On the lakes, the restricting (or liberating) aspect is the ice edge. On Lake Ontario, you can see by Braddock and Cranberry’s movements how the ice margin is extending farther and farther from land — five miles last week, more than seven miles this week. It provides them with a base for hunting, and an easy ride when the wind moves the ice sheets, which are for the most part not shore-fast.

Lake Erie, which is now largely frozen, is simply an expanse with no real features except for the increasingly scarce cracks of open water. No wonder Erie was just meandering around.

The inland farm/prairie birds, on the other hand, have no leading lines to pull them away from their territories. It’s fascinating to see the same species react in very different ways to very different habitats.

Buena Vista, whose transmitter has been only sporadically communicating, continues to be sighted in the general area of his release in late December. And Assateague’s transmitter uploaded new instructions this week, but didn’t check in tonight — we don’t know why.