It’s been an incredibly productive weekend for SNOWstorm collaborators, and while I have to keep this update short, the big news is that we have four more tagged owls sending us data.

In Wisconsin Saturday evening, Gene Jacobs and Mike Lanzone tagged an immature female near Appleton, a bird they nicknamed Freedom for the nearby town. We’ll have the story and photos later from Mike, who with his wife Trish is already on his way to the Tennessee/Alabama border to trap golden eagles. 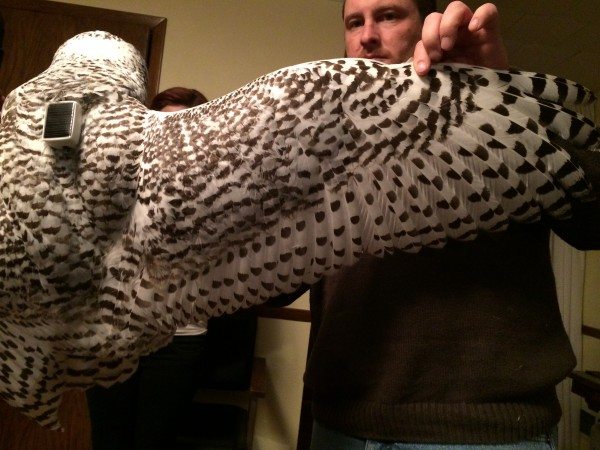 Freedom, showing the heavy barring on the secondaries that is the mark of a female. (©Mike Lanzone)

And Saturday afternoon, Tom McDonald tagged two young males on the Lake Ontario shore near Rochester, New York — Braddock and Cranberry, named for Braddock Bay and Cranberry Pond, where they were caught. “Weather conditions here are miserable, with howling winds and blinding snow,” Tom reported, but both owls were in excellent shape, like all the owls we’ve encountered this winter.

Steve Huy was trapping in Delaware, trying to help relocate snowy owls at Dover Air Force Base, but for the second weekend in a row got skunked despite a lot of trying. Those owls are perhaps a bit too well-fed to be interested in a pigeon.

Because they were on a test cycle, Freedom and Cranberry’s transmitters checked in today. Freedom had moved a mile or two east of her release point, hanging out this afternoon on a dairy farm silage bunker. But Cranberry’s track was the really fascinating one.

After spending the night around the frozen ponds, he flew out into the lake shortly after sunrise. And then, at 15-minute intervals, his transmitter plotted a series of locations over the next four and a half hours that formed an almost straight line, with the evenly spaced GPS plots roughly two-tenths of a mile apart. 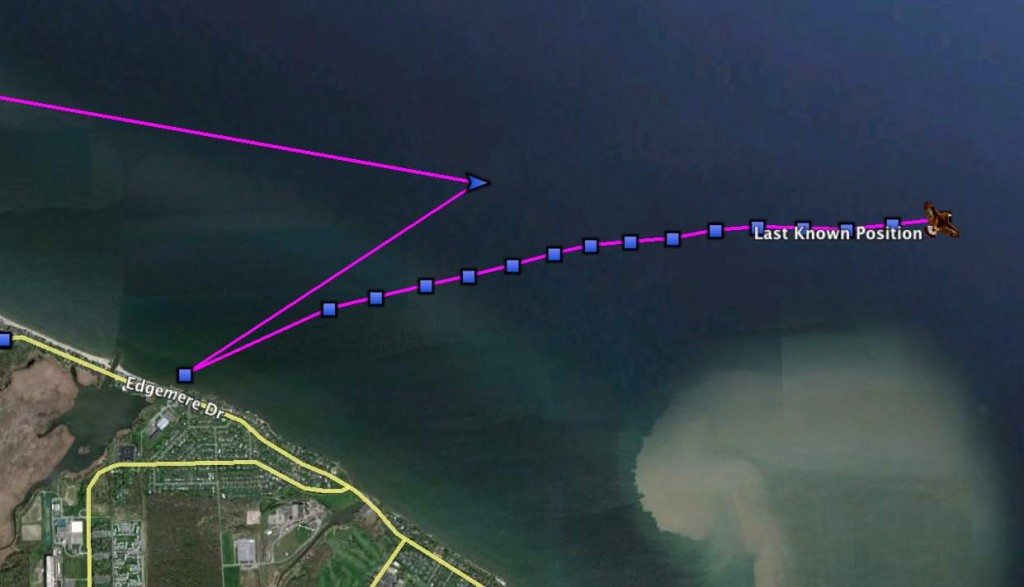 Cranberry’s track, sailing on an ice floe wherever the wind blows. (©Project SNOWstorm)

The reason? He was apparently hitching a lift on an ice floe, which the westerly winds were pushing east and slightly north at about half a mile an hour. Given that we now know some snowy owls spend the winter on the Arctic pack ice, it shouldn’t be a surprise — but it was very cool to see.

We’ll be adding the maps for the new birds soon, but if we don’t get them up immediately, give us a little time — everyone working on this project is doing it in their spare time, and sometimes our day jobs get in the way. But we’re as anxious to share as much information as we can, without jeopardizing the safety of the birds, as you are to see it.

Freedom's just another word for 'owl'
Return of the prodigal owl