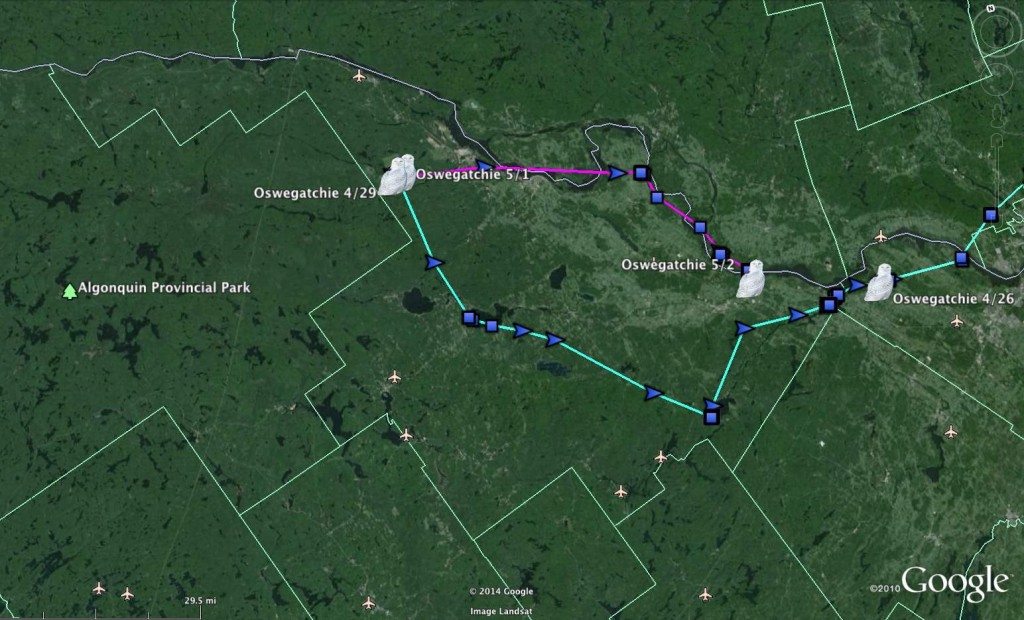 Oswegatchie’s latest movements, including a couple of days on the eastern edge of Algonquin Provincial Park in southern Ontario. (©Project SNOWstorm and Google Earth)

The season is definitely winding down, and it seems as though several of the snowy owls that were near the edge of regular cell range may have passed beyond it, since only three checked in Thursday and Friday.

Oswegatchie, who had been west of Ottawa, moved right to the edge of 7,600 square kilometer (2,900 square mile) Algonquin Provincial Park, famous for its wolf packs, lakes, maple and spruce forests — and, not surprisingly, a black hole for cell coverage (as a wilderness park should be).

The owl spent April 29 and 30 along the Petewawa River, just east of the park boundary (and just barely within cell range), in a forested area with nothing but gravel roads. Then he flew back to the Ottawa River, winding up Friday evening near Renfrew, only about 20 km (12 miles) from where he’d been April 27.

Kewaunee is moving north again incrementally. By April 30 he’d moved off Green Bay, which is now largely ice-free, and onshore in the Upper Peninsula of Michigan’s Delta County. He pushed through some densely forested country to near the village of Bark River, where he spent the day May 1, then flew northeast to Little Bay de Noc, near Gladstone and Escanaba, where there must still be ice, judging from his resting locations out on the bay. 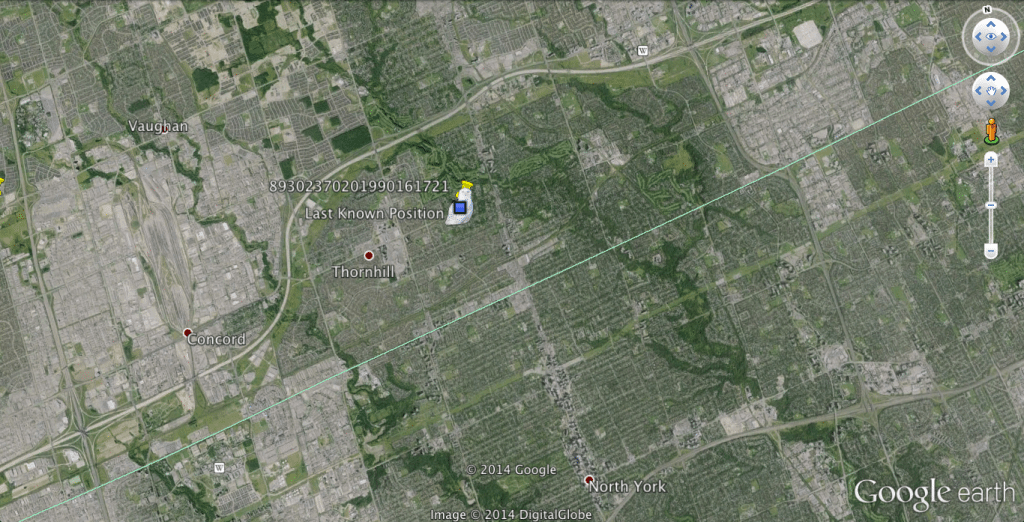 The approximate position of the tower (not the owl) through which Hungerford’s transmitter checked in Thursday. (©Project SNOWstorm and Google Earth)

But the most unexpected report we had was from Hungerford, a big female we tagged Feb. 17 on the coast of Maryland. Her transmitter has been fitful since the end of March, when she was hanging out on the New Jersey shore between Avalon and Stone Harbor, north of Cape May.

Thursday, however, she transmitted 60 locations — all from New Jersey, and all from March 28-29. The voltage graph suggests the transmitter’s mostly been in sleep mode. Why? It could mean that she’d been killed, and the transmitter wasn’t getting enough sun to operate properly.

So the big question was — where was Hungerford now? Just because she’s transmitting month-old data from New Jersey doesn’t mean she (or at least her transmitter) is necessarily still there — but if she is, we could start looking.

Fortunately, Andy McGann and Mike Lanzone at CTT had a few tricks up their sleeves. By querying the CTT servers, they determined that the transmission came via a Rogers Wireless GSM tower — and Rogers isn’t an American cell carrier. It’s Canadian.

Mike and Andy quickly narrowed it down to a tower just outside Toronto — so unless someone picked up her transmitter in New Jersey and carried it to Toronto, Hungerford is on her way north. And just to make the whole thing even odder, the very same day, a migrating Canada goose tagged with a CTT neck collar sent a transmission via the very same tower. What are the odds?

There was an eBird report from late last week of a snowy owl at the nearby Downsview Airport, but the photo with the report showed a very pale bird, probably male, and without a transmitter. But it wouldn’t surprise me if that’s where Hungerford is, too.

We also got a report and photo via Facebook from Jennifer Howard in Innisfil, Ontario, of one of our tagged owls eating a bufflehead on May 1. That’s near Lake Simcoe, where both Amishtown and Braddock have spent time in the past. None of the birds checked in from there yet, though, so just who Jennifer saw is a mystery…but an obviously well-fed mystery.

Chilling at Fitzroy Harbour
Ramsey, on the Brink?