As I mentioned in my last update, we’ve been trying an experiment with Monocacy, the immature female snowy owl tagged in Maryland earlier this month.

On Friday, our colleagues at CTT switched her transmitter to a new duty cycle that collects a GPS location every 30 seconds, instead of every 30 minutes. Consequently, we’re collecting data at 10 times the normal rate — more than 7,500 locations in the past five days, instead of 720. This gives us an absolutely unprecedented look at the movements of this most urban of all our owls.

Her transmitter also checks in every morning instead of every third day, so we’re getting closer to real-time monitoring of her movements. It’s putting some strain on her solar-charged battery, so we’re switching back soon, but in the meantime the results are incredible.

She’s been moving around the city quite a bit, and Tuesday night passed through some neighborhoods she hadn’t visited before. One big cluster of locations caught my eye, and when I switched Google Earth to streetview, it became clear what the attraction was. 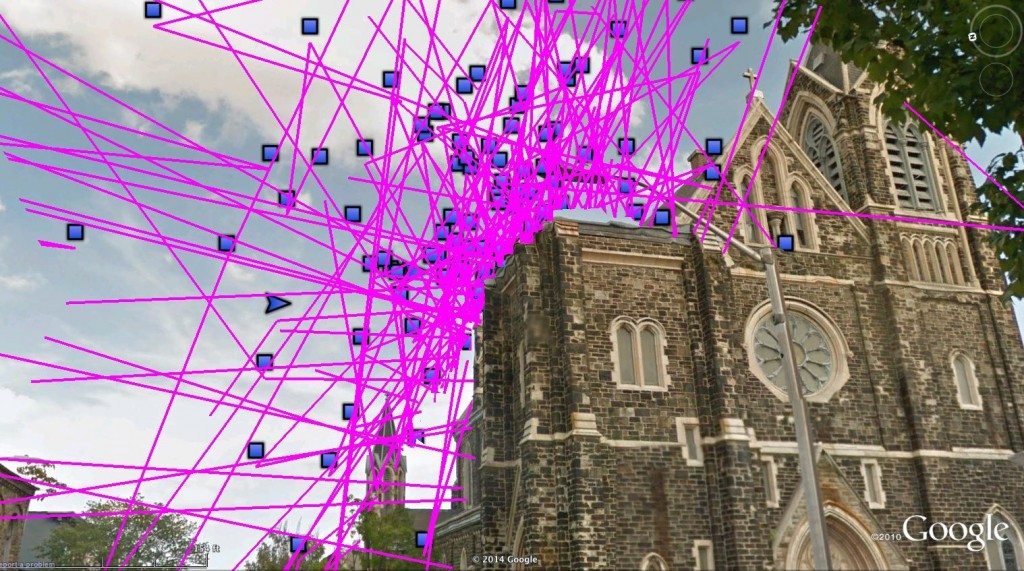 That’s not a bat in the belfry; Monocacy spent a couple of hours Tuesday night sitting on the roof and steeple of this Baltimore church (©Project SNOWstorm and Google Earth)

For about two hours starting around 2 a.m. Wednesday morning, she was hunting from the roof and steeple of this church in western Baltimore. The street view feature exaggerates some of the vertical aspects of the locations, and many of them appear in open air because there’s a little inevitable slop in the GPS fixes.

Elsewhere that night, she was hunting from the roof of an apartment building, occasionally dropping to street level to go for prey. (Just to be on the safe side, even though she’s moved to a new area, I’ve trimmed off the addresses and lat/long coordinates from all these the screen shots.) 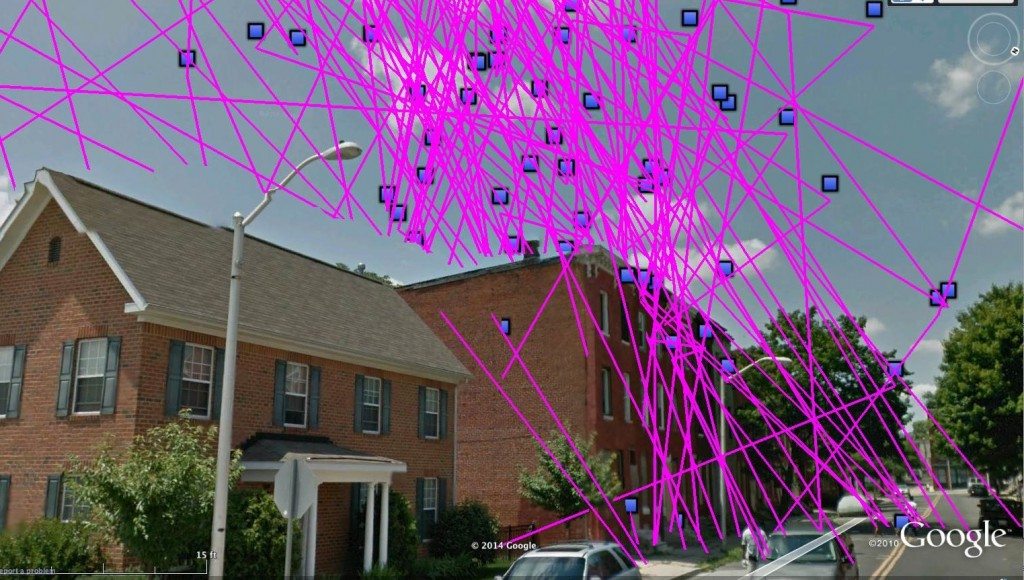 And a couple of nights ago, this was one of her favorite perches — an empty billboard frame next to a used car lot. She’s also been perching on a jail, a college, a school and an employment center. 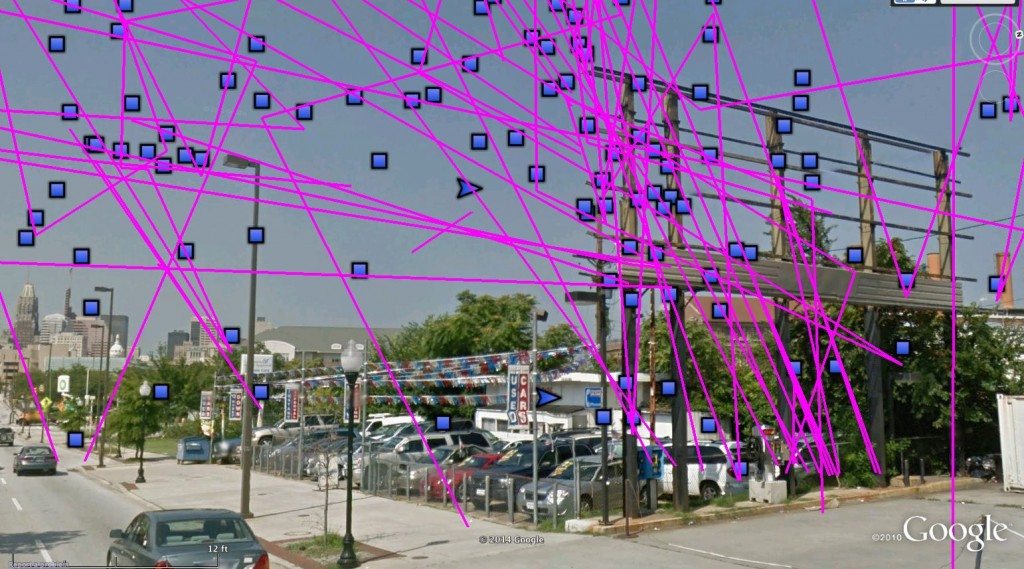 We’re pretty sure the attraction here wasn’t a good deal on a used minivan. (©Project SNOWstorm and Google Earth)

Although I mentioned flight elevation in the last update, with Monocacy and the other owls, we’re also getting fascinating data on flight speed. The 30-second intervals on Monocacy allow us to get an especially sharp view of her flight speed, recorded through the GPS fix via the transmitter, and by calculating time and mapped movement when we plot the data. 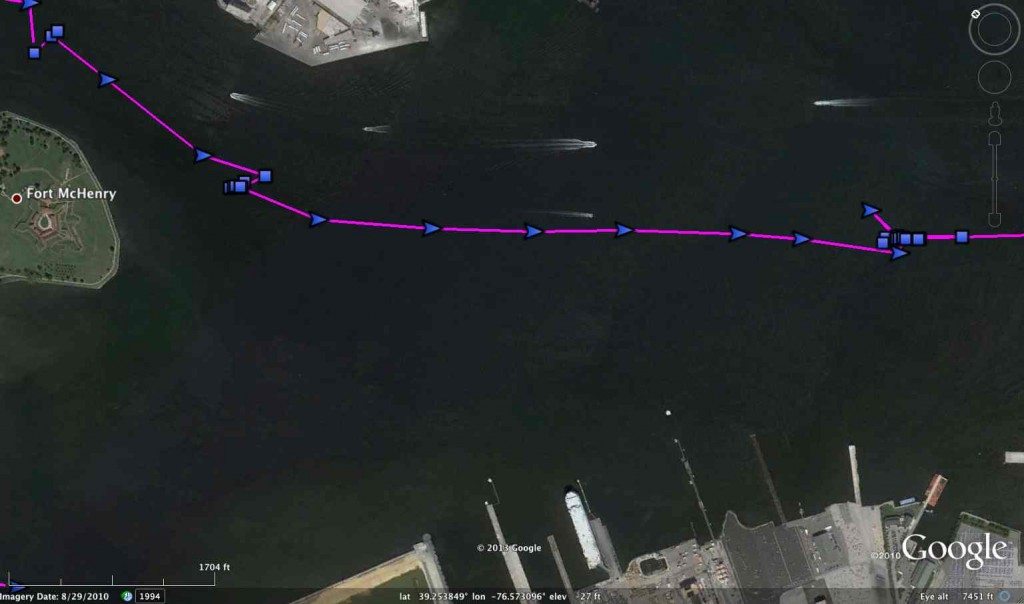 Monocacy’s path into the Inner Harbor, which allowed a handy calculation of her flight speed. (©Project SNOWstorm and Google Earth)

For example, Sunday night she flew north up the entrance to the Inner Harbor, following a straight course for about three minutes, during which her transmitter recorded locations seven times. Those recorded speeds ranged from 9.1-18.9 knots (10.4-21.7 mph), averaging 13.68 knots (15.74 mph). The distance she covered was .93 miles, so calculating her progress across that distance gives a flight speed of 16.1 knots (18.6 mph) — about 20 percent faster than what the onboard reading suggests. The guys at CTT tell me that this is probably the more accurate reading of the two.

But in general terms, it’s been interesting to see the differences in flight speed between local movements and migration. Last night, Monocacy averaged 8.7 knots (10 mph) as she moved around the city, and even that overstates most of her movements, because she made two rapid flights of more than 20 knots; take them out and her average flight speed was just 6.3 knots (7.2 mph). 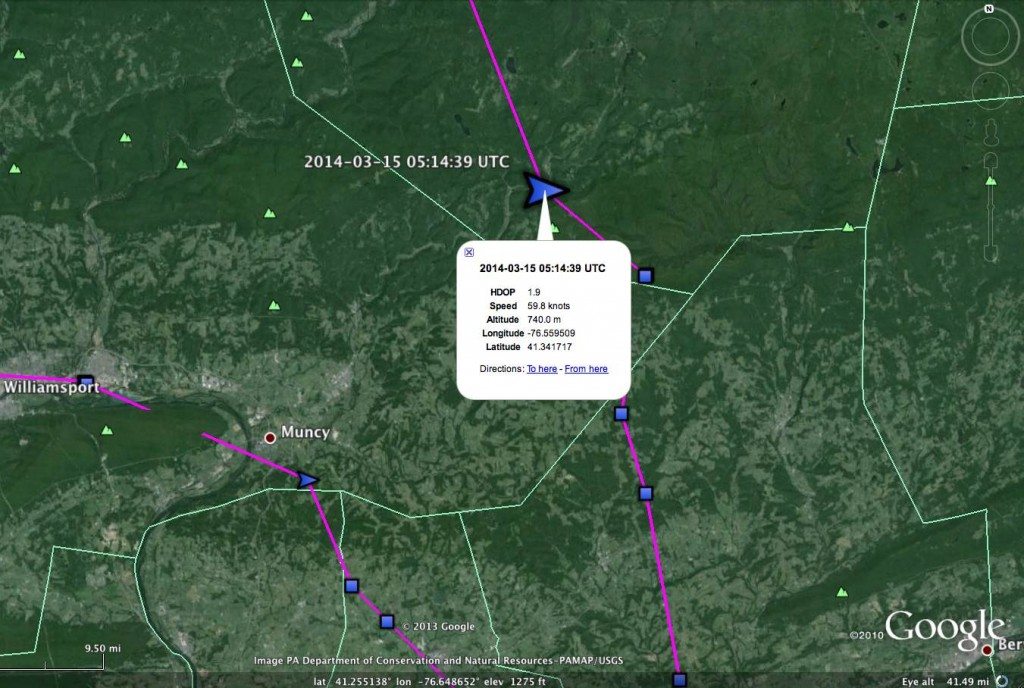 An owl in a hurry — the maximum speed recorded for Womelsdorf, flying about 800 feet above ground level. (©Project SNOWstorm and Google Earth)

Compare that with Womelsdorf, who took off March 14 with a good south wind behind him and was averaging 39.25 knots (45.1 mph) before he stopped in northern Pennsylvania. At one point, perhaps with a good gust of wind behind him, he was making 59.8 knots (68.8 mph).

The next night, with calm winds and perhaps less of an itch to make speed, Womelsdorf averaged 17.6 knots (20.2 mph). Amishtown similarly averaged 30.7 knots (35.3 mph) on his first night of migration north from Lancaster County, then settled down to an average flight speed of 23 knots (26.4 mph) over the next two nights.

One of the tasks ahead of us, once the birds are out of here, will be more rigorously calculating flight speed by using GIS tools. So far as we know, this is the first time that especially migratory flight speed and altitude has been documented for any species of owl, anywhere — just one more way SNOWstorm has been pushing the boundaries of raptor science this winter.

…And the rest of the bunch
Northward Bound

4 Comments on “When an Owl Goes to Church”