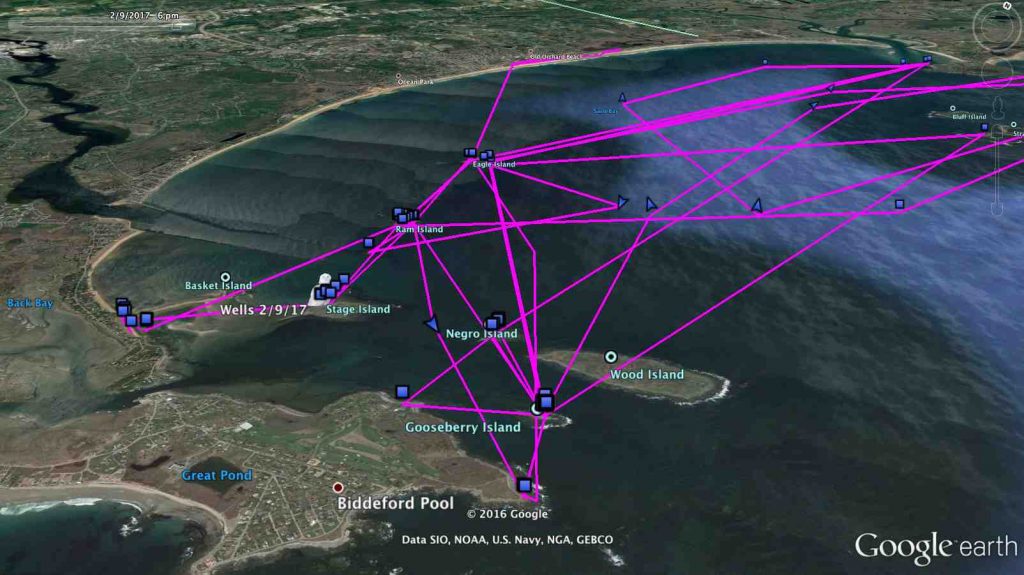 Wells’ movements around the islands of southern Saco Bay — site of the heroic rescue of a little girl half a century ago. (©Project SNOWstorm and Google Earth)

Some weeks are exciting, some weeks are more of the even-keel variety. This is one of the latter — but we do have a terrific milestone to note, with gratitude.

Our five tagged owls have all settled into winter territories, including Wells, who initially had us worried that she’d hightail it back to the Portland (Maine) airport where she’d been caught. Fortunately she seems to have found a spot she likes. While it doesn’t necessarily make for exciting reports, the data all of these stay-at-home owls are generating as they move about their winter territories is exactly what we started SNOWstorm to gather — highly detailed information about the habitat selection, winter movement and hunting ecology of snowy owls.

And ever since we started Project SNOWstorm, we’ve relied on the public to provide all the funds that pay for the basics — the very expensive transmitters we need, for instance, and the lab work and analyses that shed so much light on snowy owl health and environmental threats. (The time we put in is all volunteered.)

So we’re especially grateful to the many people who generously supported our 2016-17 online campaign at Generosity.com. This week we hit our goal of $20,000 — and in doing so, we’ve also secured a $10,000 challenge match from the Bobolink Foundation. Whether you gave a little or a lot, we appreciate more than you can know. (And if you didn’t, it’s not too late — you can still support SNOWstorm with a tax-deductible contribution.)

So let’s start with Wells, since we still hold our breath a little each week when we open her latest data file, lest we see that she flew back into danger at an airport. I’m relieved to report that she remains on Saco Bay, moving back and forth between the twin peninsulas that frame this shallow, 5.5-mile (9 km) wide scoop into the southern Maine coast, Prouts Neck to the north and Biddeford Pool to the south. It’s an area with lots to offer a big owl — solitude, space and plenty of eiders, gulls and other prey.

Wells’ favorite roost site is Gooseberry Island, a little five-acre rocky slab just off Biddeford Pool. She’s also been using Stage Island, but pointedly not employing this small island’s most notable feature — a 60-foot (18 meter), gracefully tapered stone tower that was built in 1825 as an aid to navigation to the mouth of the Saco River. The top must provide a superb view of the bay, and I’m surprised Wells hasn’t used it as a twilight hunting perch. Nor has she used Wood Island, the largest island in the bay and crowned at its east end by the second oldest lighthouse in Maine, built in 1858.

Wells has been roosting a lot on nearby Negro Island, which shows barely an acre (.43 ha) of dry land above the high tide mark. Once known as Tappan Island, it was home to a small general store in the 19th century, and figured in an heroic rescue in late November 1960. You can read the details here and here, but in a nutshell, the Wood Island light keeper’s 2-year-old daughter became gravely ill, and two young Coast Guard seamen braved high seas, heavy rain and dense fog to take her off the island in a skiff.

Rowing back to their 30-foot cutter through the darkness, however, the skiff was capsized by waves, hurling all three into the water. After more than an hour in the sea, one apprentice seaman managed to get himself and the small girl onto Negro Island, while the other struck out in the freezing darkness to swim back to the cutter for help. The girl’s father, realizing what had happened, managed to get the two castaways off Negro Island in rough surf, but even once aboard the cutter (which had plucked the swimmer from the icy water), the fog prevented them from navigating the tricky entrance to the Saco River. Suffering from severe hypothermia, the child was near death. A local lobsterman, himself a former Coast Guardsman, then sallied out from the mainland, found the cutter and raced back with the girl, who survived. Many years later the seaman, the girl’s father and the lobsterman (the last posthumously) were awarded the Coast Guard’s highest honor for their bravery.

So, quite the historical spot that Wells has picked for herself, though I imagine she’s more interested in the eiders.

Hardscrabble continues to play ring-around-the-rosie with a block of forest in southern Ontario. (©Project SNOWstorm and Google Earth)

Elsewhere, there’s not much change to report. Dakota is hunting her usual wheat fields in southern Saskatchewan, where she’s been since early December, although she did range a bit farther to the southwest from her core area Friday than she has before. Oswego is spending almost all of her time on the waterfront in Oswego, NY, moving between the jetties, parks, lighthouse and a few house rooftops and tall trees on Lake Street. In the Ottawa River valley of southern Ontario, Hardscrabble continues to circle the agricultural margins of the large forest block near Cobden, ON, including occasional stops at a big sand- and gravel-mining operation.

Baltimore, his transmitter still on the fritz, remains near Kinburn, ON, where our friends Dan and Patricia Lafortune are keeping an eye on him. Tom McDonald was packed and ready Thursday to make a third trip to Canada to try to recapture Baltimore and recover the bad transmitter, but Tom had last-minute car trouble. He’s not giving up, though.

Overall, in fact, we’ve been more than a little snakebit this winter. We have transmitters poised to deploy (and active trapping crews in the field) in North Dakota, Maine, Maryland and New York, among other places, but the owls haven’t been cooperating. Chris Neri and Nova Mackentley, from Michigan Audubon’s Whitefish Point Bird Observatory, headed up two trapping crews and spent much of last week in the field in the Upper Peninsula, where there are a number of snowies this winter. (This is the same area where they tagged Whitefish and Chippewa two years ago.)

“In three days with two teams trapping, we got only one pass,” Nova said. “Lots of birds would come down and grab voles, no matter what type of trap we had out.” They tried bal-chatris (small cage traps festooned with leg nooses and baited with hamsters or mice), “various combinations of bow nets with pigeons, and a cool, fake wriggly rabbit thing we rigged up,” Nova said. Nada.

There’s plenty of food, which is great for the owls, but makes trapping more of a challenge. The UP owls are also concentrated in a small area without good access from the road, “and photographers that chase the birds around, which does not really help. I had no idea there would be so many people coming during the week,” Nova said.

Still, we’re plugging ahead, aiming to get a total of 10 owls tagged this winter. It’s about time some of the luck starts turning our way.

All Settled In
Trying for Baltimore