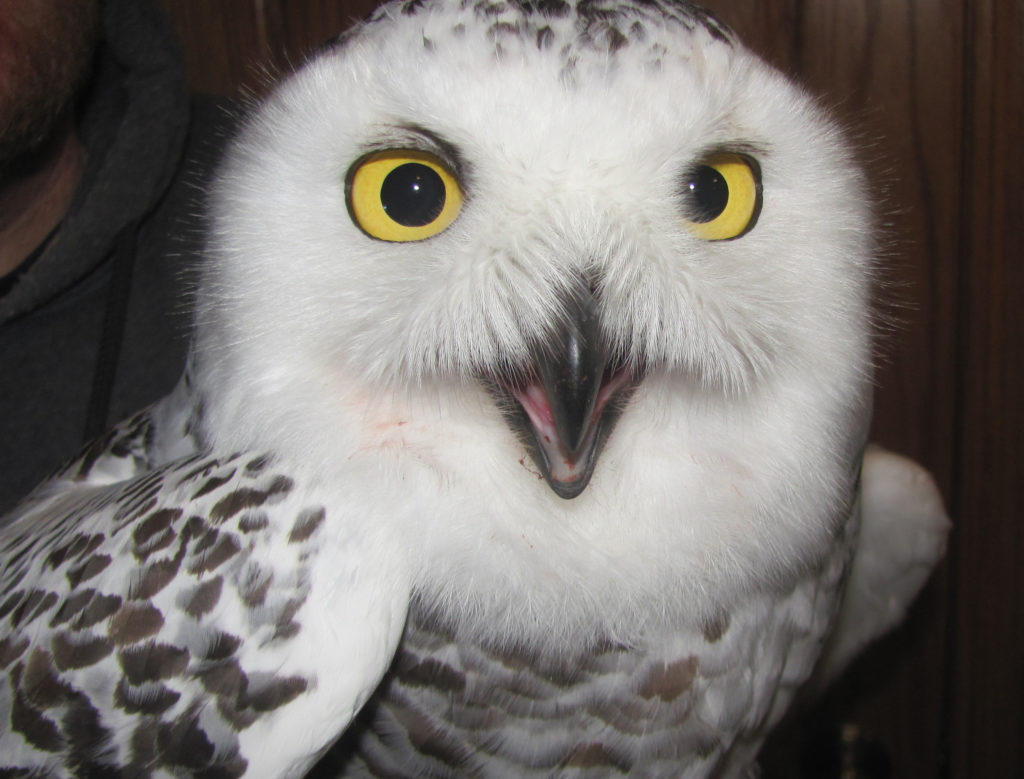 Plainfield (with a little blood from dinner on her face) was relocated from a Wisconsin airport for her safety, and is now hunting the Buena Vista grasslands. (©Gene Jacobs)

While Coddington continues to recuperate from is close encounter of the manure kind, we have a new owl in central Wisconsin — Plainfield, an adult female relocated from an airport for her safety, and tagged by Gene Jacobs and released on the Buena Vista grasslands, where she’s been ever since. 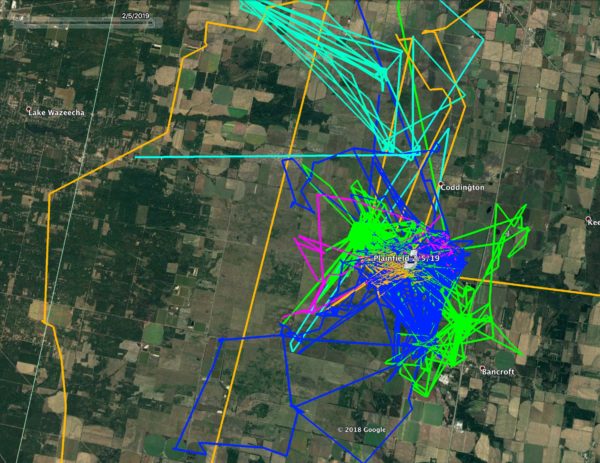 In fact, Plainfield is occupying almost exactly the same territory that Straubel and Austin — also relocated airport owls — and Bancroft held last winter, in and around some commercial cranberry bogs in southwest Portage County. It’s three or four miles south of the area Coddington was using this winter before he got into trouble (and nowhere near the barn he got into that landed him, banged up and manure-smeared, in rehab). We’ll have a map for Plainfield posted in the near future.

Speaking of Coddington, Marge Gibson’s crew at Raptor Education Group Inc. had their hands full with lots of admissions during the worst of the record-breaking cold snap, but they will be working with our colleague Dr. Ellen Bronson of the Maryland Zoo, as well as SNOWstorm team member Dr. Sherrill Davison at the University of Pennsylvania, to determine why he was underweight when he was admitted. Marge was able to conduct tests that ruled out lead poisoning, but there is concern Coddington may be suffering from a different contaminant exposure. Now that the weather has eased they’ll be sending some of Coddington’s blood to Ellen and Sherrill for additional tests to see if that’s the problem. Fortunately, she reports that Coddington is doing well, has regained his lost weight and then some, and is in an outdoor enclosure with two other snowies. 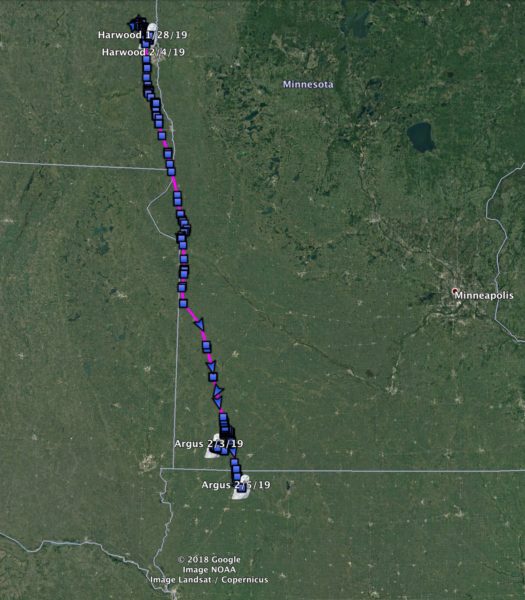 The weather has shuffled the deck a little bit, but the biggest change is that we have our first-ever SNOWstorm owl in Iowa — Argus, who was originally tagged 270 miles (430 km) north above Fargo, ND. After spending a few days near Luverne, Minnesota, he moved across the border into Osceola County, Iowa, on Feb. 4 and by the next day was near the town of Sibley. (In 2015 a Wisconsin-tagged owl, Goose Pond, moved to just across the Mississippi River from Dubuque before vanishing without a trace, but so far as we know, didn’t make it into Iowa.)

Meanwhile, back up in Fargo where Argus was caught, Harwood is sticking tight as a tick to his favorite billboards and fenceposts along I-29 and its frontage roads, not having moved much at all since he was tagged there last month. Farther northwest, Woodworth has shifted another 30 miles (50 km) to the west, just a few miles from the Canadian border near the Souris River, between the towns of Roth and Landa.

It’s been a week and a half since we’ve had a transmission from Pettibone, in southcentral Saskatchewan, but he’s gone dark for periods in the past and he may be in a cellular dead spot.

In the Northeast, Otter is hanging around the reliable snowy owl hotspot that is the farmland of Jefferson County, NY. Her new hybrid GSM/satellite transmitter is doing exceptionally well, maintaining a superb battery charge despite a lot of clouds that are a persistent issue in that part of the world in winter. (At this time of year we’re only using it’s GPS/GSM cellular capability — we won’t turn on the Argos satellite system until we see signs she’s getting ready to head north.)

As of the first of the month, Island Beach was using the farmland of southern Quebec — exceedingly long, narrow fields laid out in the classically French (and French Canadian) fashion, near the town of Saint-Basile-le-Grand just across the St. Lawrence from Montreal.

3 Comments on “Plainfield Joins the Flock”