Columbia has moved from the Riding Mountain National Park area to farmland south of Lake Manitoba and Winnipeg. (©Project SNOWstorm and Google Earth)

Well, we predicted this would be an off-season for snowy owls in many parts of North America, and so far that seems to be the case. And it’s been an unusually slow start for us in terms of returning tagged owls.

Columbia, who popped back on the grid in late November in southern Manitoba, has moved 240 km (about 150 miles) southeast, and since Dec. 3 has been near Carman, MB, about 75 km (46 miles) southwest of Winnipeg. This is wide, flat farm country that doubtless looks a lot like home to an owl from the treeless Arctic.

Looking at eBird reports, the distribution of snowies so far this winter looks about as we’d expect in a non-irruption year, primarily along the St. Lawrence and Ottawa river valleys in Québec and southern Ontario, around and among the Great Lakes, and from northern Minnesota and North Dakota up into the Canadian prairies. Here in New England, where I live, there have been only a relative handful so far. The most southerly report I’m aware of was an owl earlier this month in central Illinois.

The owls have also been later than usual in showing up. For example, our colleagues with Falcon Environmental in at the Montréal airport, who usually see their first snowy owls of the season there in late October, did not catch their first, an adult male, until last week. He was not tagged, but banded and marked — and even though they moved him 70 km (43 miles) he returned four days later. 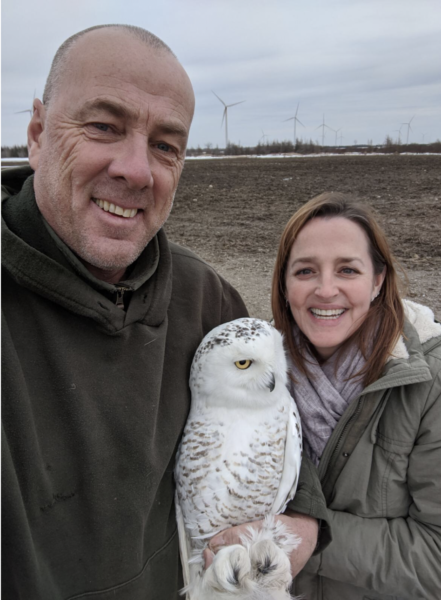 Malcolm Wilson and Charlotte England with one of their favorite birds.

We do have some great news to share, though. We’re delighted to welcome two new (but highly experienced) banders to the SNOWstorm team, Charlotte England and Malcolm Wilson in southern Ontario. Charlotte and Malcolm are part the Simcoe County Banding Group overseen by Nigel Shaw, and between them have many decades of raptor banding experience in North America, Europe and Africa — in fact, I first met Malcolm almost a decade ago when I had to the chance to help him do mist-net surveys of breeding birds in the Tchimpunga Chimp Reserve in the Republic of Congo. He is originally from the U.K.and has spent 30 years in Africa working with birds of prey, as well as facilitating guide training workshops

Charlotte, a veterinary assistant with 12 years’ experience banding raptors, assisted our own Becca McCabe with tagging snowy owls Amherst and Simcoe in 2020 on Amherst Island, and she and Malcolm have also been helping Becca trap and fit broad-winged hawks in Ontario with transmitters for a tracking project with Hawk Mountain Sanctuary. (They’ve trapped and banded more than 400.) In October she and Malcolm drove down to Maryland to complete their training and certification under the tutelage of SNOWstorm co-founder Dave Brinker from Maryland Dept. of Natural Resources, and with that final piece in place Charlotte received her permit from the Ontario Ministry of Natural Resources. It’s been a long process, reflecting the many hoops researchers are (with good reason) required to jump through to work with wild birds.

Now they just need some owls!

Otter's Back on the Grid
Moving South

8 Comments on “Pretty Quiet Out There”