Welcome back to Project SNOWstorm. Our last update was back in early May, when only one of our tagged snowy owls was still far enough south to be in cell range. That bird, Chippewa, headed north around May 1, and since then all’s been quiet, as the snowies returned to the Arctic breeding grounds.

We’ve been busy since then — in fact, Oct. 14-15 we convened a meeting of many of Project SNOWstorm’s collaborators in Cape May, NJ, hosted by New Jersey Audubon’s Cape May Bird Observatory.

For two days we planned and plotted, reviewed results from the data we’ve already collected, some of which we’ll highlight here in the coming days — especially some revealing insights from the extensive pathology and toxicology work we’ve done on more than 100 dead snowy owls salvaged over the past two winters, as well as some exciting uses of chemical isotopes in feathers, blood and tissue to look at where in the Arctic the birds were coming from, and how their diets vary with time and across distance.

Not surprisingly, we also looked ahead to the coming winter. But no one really knew what to expect.

Jean-François Therrien from Hawk Mountain, who was back in the Canadian Arctic this summer with his colleagues from Laval University, told us that while snowy owl breeding activity was reported in Russia and Finland, there was little indication of significant snowy owl nesting in the parts of Arctic Canada that they monitor.

On the other hand, the Arctic a big place, and we noted a report from the Center for Conservation Biology in Virginia of lots of snowy owls on Bathurst Island in the Canadian Arctic archipelago (where they were tagging plovers), which might indicate a breeding concentration there.

So, we gamed out two possible scenarios for this winter. One would be a winter without an irruption, but with normal, background-level numbers of birds — a few along the New England and Great Lakes coasts, and the more predictable numbers seen every winter in the Canadian prairies.

But we also recognized that the time might be ripe for a major irruption in the Plains and Pacific Northwest, as last happened the winters of 2011-12 and 2012-13.

In either case, we assumed we’d have some time to prepare, since even in big flight years, most of the owls don’t usually appear until sometime in mid- to late November.

So much for planning. 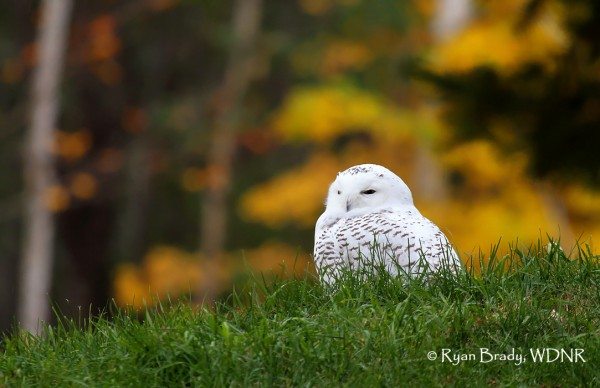 Ryan Brady of Wisconsin Department of Natural Resources got this photo last week of a snowy owl in a wooded backyard. (©Ryan Brady)

Within a day of our departure from Cape May, word came flooding in from Wisconsin and Michigan of snowy owls, many of them showing up in highly unusual places, like heavily wooded backyards; others were photographed sitting on the hoods of cars in parking lots, looking pretty lost.

By the next day, Wisconsin alone had more than 30 reports.

It’s not unusual for snowy owls, when they first arrive south, to wind up in wildly inappropriate locations — after all, many of them are juveniles, and even adults may never have seen humans or any man-made object before. It can take a little while for them to get their bearings and find a place, like coastlines, open farmland or (unfortunately) airports, that look more like home.

A lot of them also get in trouble quickly — hit by vehicles or planes, electrocuted on high-tension lines, colliding with wires or glass, eating poisoned rodents.

A significant number of the early-arriving owls in the Great Lakes have ended up with wildlife rehabbers, which report that many are seriously under weight. This may be a clue that we’re dealing with a different dynamic than we’ve seen the past two winters. 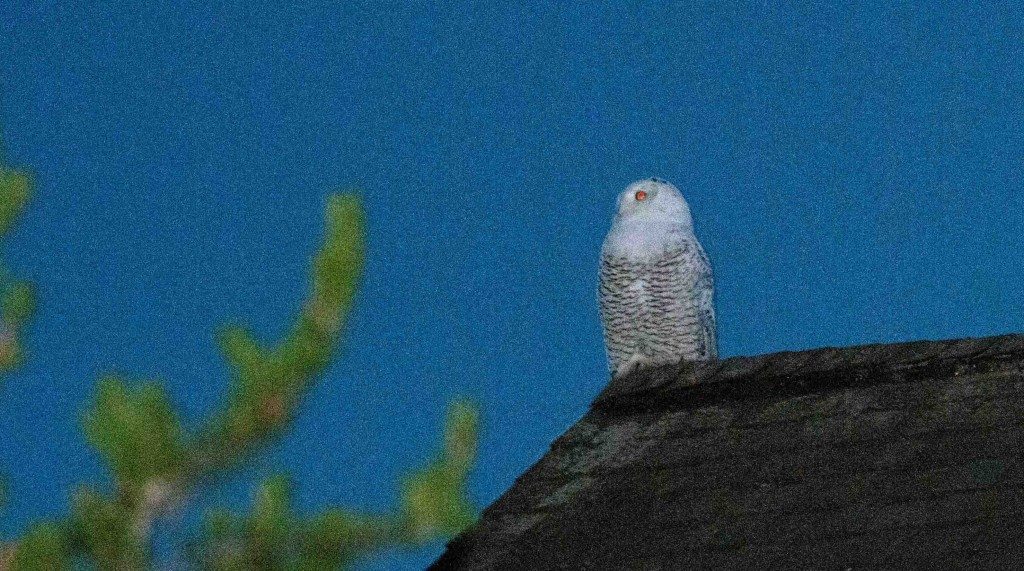 SNOW on the roof — Nova Mackentley caught this snowy owl, just visible in the twilight, on their rooftop on Whitefish Point, on the U.P. of Michigan, on Oct. 22. (©Nova Mackentley)

In 2013-14, virtually all the snowies in the East and Midwest were first-year juveniles, and they were almost uniformly fat and healthy, the product of a lemming boom in Canada and a highly productive breeding season. Last winter, the age mix skewed more heavily to adult owls (many of them second-winter birds that had likely come south the previous winter) and while they weren’t as over-the-top fat as the year before, their condition was still very good.

The owls in the Great Lakes this winter, however, might be moving south in response to a genuine prey shortage, the kind of classic set-up for irruptions by species like great gray owls and northern hawk owls, in which adult birds are forced south by hunger. Longtime snowy owl banders Tom McDonald and Norman Smith, who are leaders in Project SNOWstorm, cautioned those of us at the Cape May meeting that early arrivals this winter could show up thin and food-stressed — though both men said such birds tend to gain weight and quickly get back to normal once they’re down here.

But neither do we want to read too much into the fact that some birds are being found very thin — after all, healthy owls don’t wind up at the rehabber, and it’s hard to say how representative the sick and thin birds are of the irrupting population as a whole. Also, as our extensive necropsy and toxicology work over the past two winters shows, starvation can be a result of underlying issues like disease, toxins and internal injuries not apparent without some CSI-style detective work. It can be the last straw, not the initial problem.

In any event, we’re scrambling. Our remaining transmitters from last season are already at CTT for major upgrades that will be a quantum leap beyond what we’ve been using, and should be ready within a week or two for deployment; more are in the pipeline.

But we will be continue to be extremely careful about which owls we tag. Our collaborators are all highly experienced raptor biologists, and any time we catch an owl its health and condition are carefully assessed — not just its weight but also its body muscle mass, subcutaneous fat and other condition indices.

Any bird that appears to be in less than ideal shape won’t be tagged, period. Our main concern is and will continue to be the welfare of the owl. 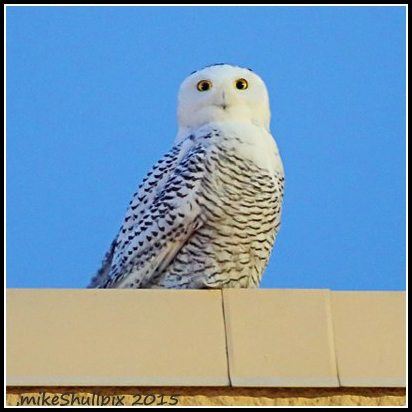 Dr. Cindy Driscoll from Maryland DNR, who heads up our team of wildlife veterinarians and pathologists, is already making arrangements to have those owls that do not survive in rehab, as well as others salvaged in the region, necropsied and tested for toxins.

What lies ahead? It’s impossible to say — but on Oct. 24 a snowy owl showed up in southeastern Pennsylvania, almost 400 miles (644 km) south of the nearest other report in the East up near Montreal. That’s also one of the earliest snowy owls ever reported in the Keystone State. The next day, one was spotted in northern Pennsylvania.

A third significant flight in three years in the East and Midwest would be exceptional, but we’re not counting it out. We don’t yet know if the flurry of early owls in the Great Lakes is the vanguard of something bigger and more widespread, or if what we’ve seen was an anomalous blip.

Nor does its mean that a larger flight farther west is off the table for this winter — far from it. In fact, the Great Lakes birds could be the first arrival of a primarily western irruption. We just aren’t yet sure.

We’re also watching anxiously to see whether any of our tagged owls from 2013-14 or 2014-15 come south this winter. Every time I get a text message, I’m hoping it’s one that starts, “CTT Data Update…” because that means one of our tags is back within cell range.

That’s at once the exhilarating and frustrating thing about these birds — the uncertainty about what to expect next. But Project SNOWstorm is back in high gear, so buckle up for another winter of science, excitement and huge white owls.

A Big Year? The View from the Arctic
Last Owl Standing?

17 Comments on “A Quiet Winter? Hardly!”