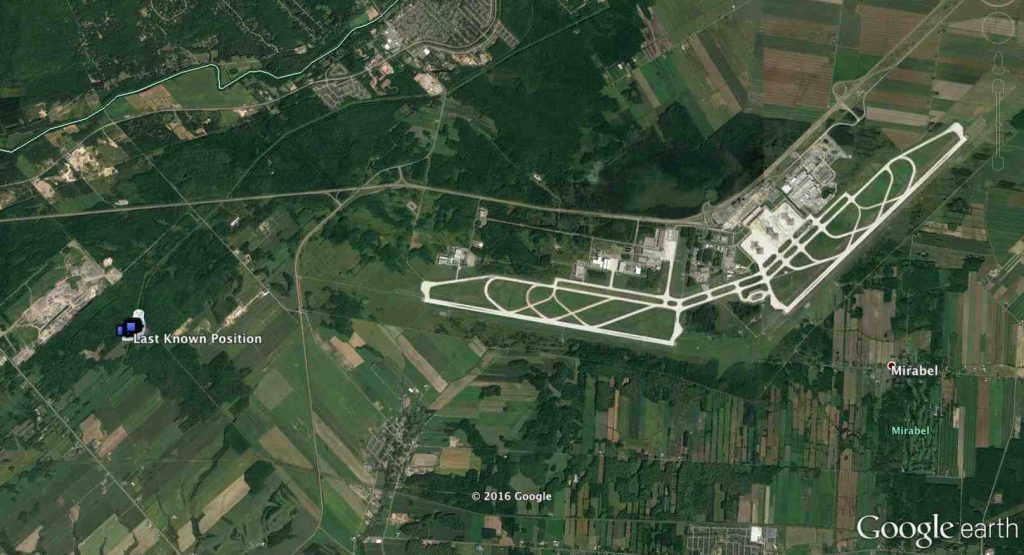 This is hardly the news we wanted at the end the season: We’ve lost Oswego.

Last week, as you may recall, this juvenile female was slowly working her way north and east, from Lake Ontario and the St. Lawrence River up to the Ottawa River along the southern Quebec border.

Last Wednesday, she checked in at dusk from a powerline corridor a few kilometers from the Montreal International Airport — two or three GPS locations near one of the electrical towers. That was worrisome; electrocution is a threat to any large raptor like a snowy owl. But we also have seen many of our owls perch on such structures without a problem, and that might have been all those clustered points meant.

Oswego was scheduled to check in Friday night, but failed to. Again, this was a little worrisome, but not terribly so — owls often wind up outside cell range at scheduled transmission times, and Oswego’s transmitter has been acting up sporadically all season anyway.

But Monday night it checked in on schedule — and all 65 locations were in the same spot, still under the powerline. At that point, we knew were either had a dead or downed owl, or that she’d somehow dropped her transmitter.

SNOWstorm team member Jean-François (J.F.) Therrien at Hawk Mountain reached out to Marilu Skelling of Falcon Environmental Services, which handles wildlife issues at the Montreal airport. Wednesday they trekked out to the site, almost two kilometers from the nearest road, and confirmed our fears: Oswego was dead, lying beneath the electrical lines.

The view from the site where Oswego was found, along a high-tension electrical line corridor through a wooded area. (Marilu Skelling)

We don’t know what killed her. The reasonable assumption is that she was electrocuted, which can happen to a bird with a large wingspan, especially if it’s wet from rain (which Quebec has had a lot of lately). But it’s also possible she collided with the wires, or even that she was felled by some unrelated illness; there were no signs she was killed by a predator, however. Although the carcass was intact, given the time of year most of the soft tissue was gone, but veterinarian Dr. Guy Fitzgerald from Universite de Montreal will examine the remains to see what he can learn. (Dr. Fitzgerald also examined Oswegatchie’s remains when they were found in 2014.) The transmitter, which was still working, will be refurbished and reused next year, if possible. We’re deeply grateful to Marilu and her staff, and to Dr. Fitzgerald, for their rapid assistance.

This is the sixth SNOWstorm owl we know we’ve lost since 2014. One was killed by an airplane strike (Philly), one from a jet blast from a taxiing plane (Wampum), two from drowning following a fierce nor’easter (Sandy Neck and Plum) and one from undetermined causes at an open-pit gold mine (Oswegatchie). But one of our goals with this project is to learn more about what threats these birds face when they are down here in the south, and these losses, hard as they are, help us toward that goal.

“It is always sad and disappointing to see one of our birds falling on the battlefield like this,” J.F. emailed us yesterday morning with the news of Oswego’s recovery. “However, we need to keep in mind that death is part of the story. From the beginning, this project has aimed to learn holistically about those birds and to increase our understanding of their full ecology. So it is unfortunately not the first or last snowy owl to die, but we have now learnt a bit more about it. Let’s make good use of this knowledge and of course, rest in peace, Oswego.