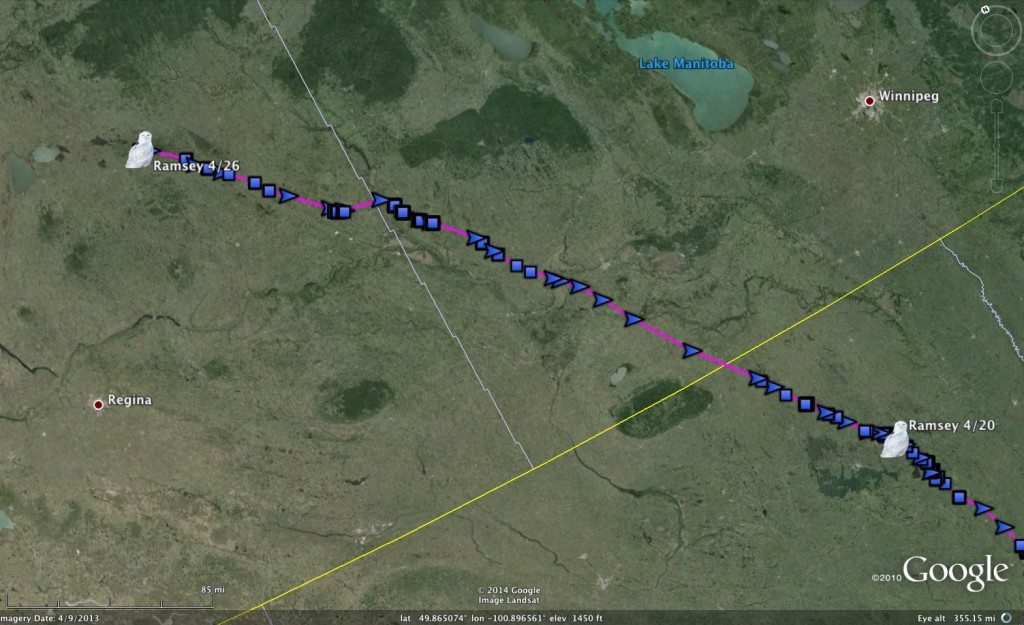 An owl on the move – Ramsey’s flight from North Dakota, across the corner of Manitoba and into Saskatchewan. (©Project SNOWstorm and Google Earth)

Ramsey, our Minnesota-tagged owl who spent the winter just outside the Twin Cities, definitely hears the call of the north. After missing a check-in on April 23, his transmitter phoned home on Saturday night — from Saskatchewan!

In the previous six days he’d left Ramsey County, ND, flown across the southwestern corner of Manitoba the night of April 22-23 — hitting speeds of almost 50 knots (55 mph/89 kph) along the way — and stopped for the day in Division No. 16, the county-level equivalent in Manitoba.

That’s flat and empty prairie country, lots of grain farming and not a lot of people. The nearby town of Binscarth is noted for “the largest outdoor swimming pool on the Yellowhead Highway,” I have learned, but I doubt that’s why Ramsey stopped. 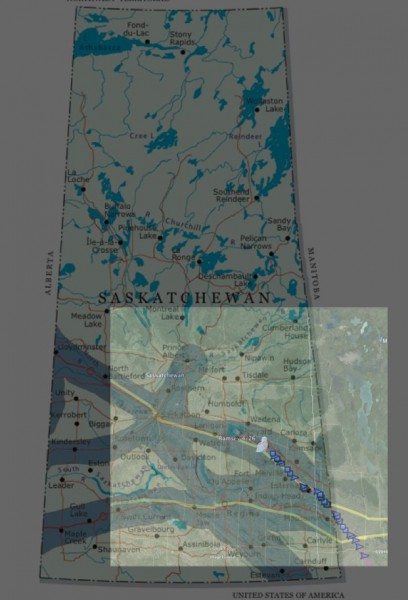 An overlay showing Ramsey’s position and GSM cell coverage in Saskatchewan. We got lucky.

One thing that part of Manitoba doesn’t have is much cell coverage, though. When last Wednesday night came and his transmitter tried to call, it apparently got no signal, and so kept storing up data.

By Saturday, though, Ramsey was sitting on the ice of Silver Lake, near the hamlet of Tufnell, Saskatchewan (population 10) — and fortunately for us, he was just north of the Yellowhead Highway, along which runs a line of GSM cell towers.

In all, he’d flown 337 miles (542 km) in the previous six days — but depending on his route, this may be the last time we hear from him this spring, because those cell towers along the highway are about it.

North of there, the only cell towers belong to Sasktel’s network, and from what I’ve been able to tell they don’t use GSM, which is the cellular system our transmitters use. Here’s a map that shows the GSM coverage in the province, overlayed on Ramsey’s position Saturday night — as you can see, north of him there’s nothing much, all the way to the Arctic. Unless he flies even farther west into Alberta, where GSM cell coverage is far more extensive and extends much farther north, this may be our last contact with Ramsey for this season.

Two other snowies checked in Saturday night. Kewaunee is still on Green Bay, although he moved up to the mouth of the bay, close to the ice edge. I suspect he’s getting the itch to move again, but it may be another false alarm.

And Oswegatchie finally decided to leave his hideaway north of the St. Lawrence River valley. He made an 82-mile (132 km) flight north and then west, looping just around Ottawa through Quebec, then back across the Ottawa River into flat, open farmland just east of the Ontario town of Arnprior. 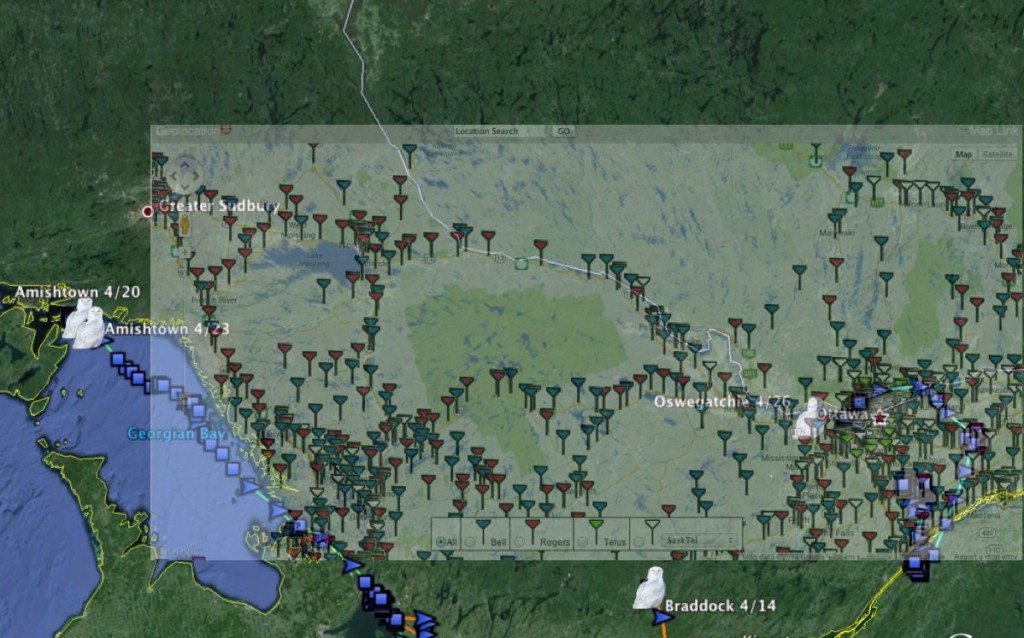 Cell coverage in southern Ontario, overlaid on last know owl locations. Oswegatchie, Braddock and Amishtown are all a night’s flight, maybe two, from the edge of cell coverage. (©Project SNOWstorm and Google Earth)

As with Braddock two weeks ago, that puts him very, very close to the edge of cell coverage…if the bird is too far from a tower when the transmitter tries to call, it won’t connect.

We knew this would happen, of course — the expectation all along was that we’d lose contact with the owls when they moved north. The advantage of the GPS/GSM transmitters that CTT makes is that they collect phenomenal quantities of data inexpensively. Instead of paying thousands of dollars a year in Argos satellite fees to get one or two locations a day, we can collect data as frequently as every 30 seconds for minimal cell data charges.

Once the owls are out of cell range they can’t transmit — but their transmitters will continue to log and store the GPS readings, every 30 minutes around the clock. At that rate, the units can store data for the next six years before they run out of memory space — and our bet is that we’ll be hearing from them before that happens.

Oswegatchie, Kewaunee -- and a Surprise from Hungerford
April 26 update

4 Comments on “Ramsey, on the Brink?”