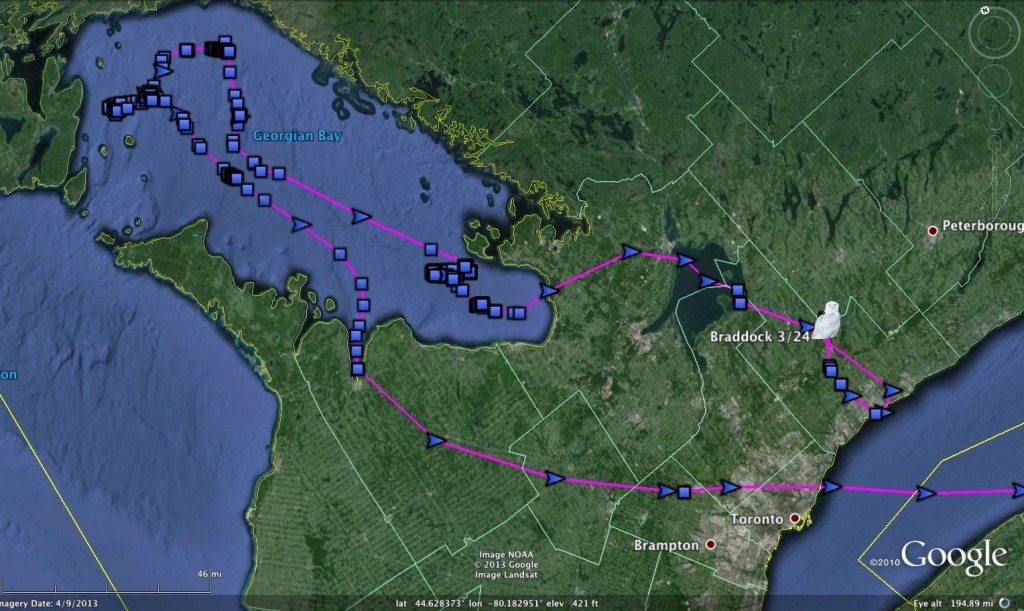 Braddock’s path up (and back down) Georgian Bay, Ontario. (©Project SNOWstorm and Google Earth)

Two updates in one day is an indication of how much is going on around here — a lot.  The first update focused on Monocacy, but there have been some fascinating movements by some of the other owls, and a reappearance by a couple of birds that had been off the grid lately.

All these maps have been updated (a big thanks to Don Crockett and Steve Huy, who handle these constant updates every three days), so feel free to explore while I give you an overview.

The most dramatic move was by Braddock, who didn’t check in last Friday, but then downloaded 340 locations Monday night. In the preceding six days he’d traveled a whopping 571 miles — across Lake Ontario and north of Toronto, flying about a thousand feet in the air, then dropping low and cruising halfway up Georgian Bay over ice, a 207-mile trip that first night alone.

Braddock completed the flight up Georgian Bay the next night, hung out there for about 24 hours, then began moving all the way back to the southern end of the bay, almost 90 miles to the south. He dallied another three days there on the ice, then flew all the way back southeast to the shore of Lake Ontario and bounced north a bit before settling down on Lake Scugog, where he was Monday night when he checked in. Incredible!

Century, tagged March 15 after being relocated to Plum Island NWR from Logan Airport in Boston, has also been on the move in a big way, hitting five states in six days.

Since the 18th she’s looped southwest through Boston, clipped the corner of Rhode Island, skirted along the northern border of Connecticut, then flew up the Connecticut River valley from Springfield, Mass., north to Greenfield. From there she cut west, cutting through the corner of Vermont, and by Monday evening she was out on the ice on Saratoga Lake, south of Saratoga Springs, NY — a trip of 209 miles altogether.

Womelsdorf remains out on the ice in eastern Lake Erie, moving into the same area off Long Point, Ontario, where Erie spent so much time. Erie, on the other hand, is lingering griddle-flat farmland in the “thumb” of Michigan in Sanilac County.

Amishtown has moved up to the southern shore of Lake Ontario near Hamlin, NY, an area that both Braddock and Cranberry had been using earlier in the winter. Wiconisco, having flown north from Pennsylvania last week to Buffalo and the retraced his flight a bit, remains about 30 miles east of the city in Wyoming County, NY.

Millcreek, whom we’d last heard from heading offshore from Ashtabula, OH, into Lake Erie, also checked in, but only with a partial download covering the period from Feb 28-March 1 — we’ll likely get the rest when he’s in a better location. During that period he moved across Lake Erie on ice, almost to the Ontario shore.

Hungerford is another owl we hadn’t heard from since March 10, but she’s still in the same general location, in the back-bay saltmarshes around Avalon and Stone Harbor, NJ. Other owls that have been keeping close to home in this last period are Sandy Neck, still on Martha’s Vineyard; Plum, around Salem, Mass., and the Marblehead Peninsula; and Oswegatchie, who is utterly wedded to Ogdensburg, NY, on the St. Lawrence River.  (With the so-called “blizzicane” that swiped Cape Cod and the islands with snow and 80 mph winds yesterday, it will be interesting to see what Sandy Neck did during the height of the storm.)

In Wisconsin, Kewaunee has made a few short (10- to 12-mile) flights away from and back to his winter territory, while Marshfield has moved west to Chippewa Falls, some 65 miles from where she was tagged.

There are some owls we didn’t hear from on this cycle, and a few we haven’t heard from in a while. Our colleagues at CTT, who make the transmitters, keep counseling patience — the golden eagles for which these units were first designed are often out of contact for months at a stretch. But it’s hard to be patient, since it’s such an exciting gift every time we download a new batch of data.

March 27 transmission update
When an Owl Goes to Church

8 Comments on “…And the rest of the bunch”