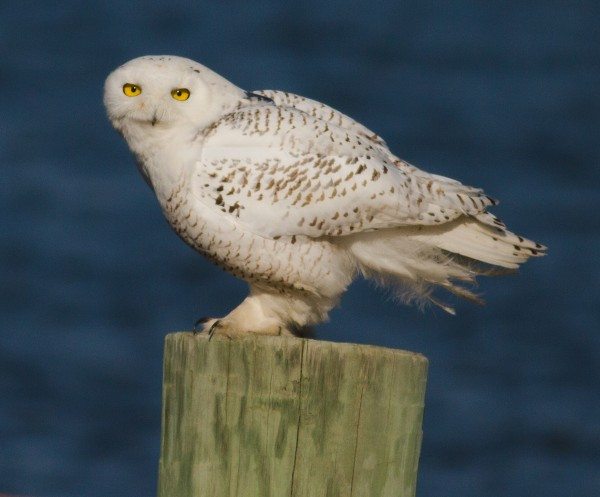 Assateague, hanging out “down the shore,” as they say in those parts. (©Bob Fogg)

Assateague’s back, and we couldn’t be happier.

You’ll recall that he was the first snowy owl we tagged this winter, back on Dec. 17 on his namesake island in Maryland. He’s also been one of the most exciting to track, moving more than 150 miles in a couple of weeks around Delaware Bay and up the New Jersey coast to Barnegat Bay.

But the last time we heard from him was Jan. 5. At first we assumed he’d moved into an area with poor cell reception, since that’s how the transmitters send data. But as the days turned into a week, and then two weeks, we began to suspect there was an other issue — an energy problem.

The GPS-GSM transmitters we’re using were originally designed for golden eagles. CTT biologist Mike Lanzone redesigned a custom white case for snowies, and made the whole unit lighter. But the first two we put out — Assateague’s and one on Buena Vista in Wisconsin — were still running a duty cycle designed for eagles.

Among other things, the duty cycle of a transmitter tells it how often to take GPS coordinates, and when and how often to try to dial out to the cellular network to report its data. Both of those tasks take energy, gathered through a solar panel and stored in an on-board battery.

Taking a GPS coordinate doesn’t require a lot of juice, but dialing out demands much more — and as you probably know from your cell phone, searching for a signal where reception is poor can kill a battery quickly.

The transmitters were programmed to phone home every day at about 2:30 p.m. That’s ideal for an eagle, active in the sunniest part of the day for a quick recharge, and soaring around in the air for great cell service.

Snowy owls, on the other hand, sit hunkered down beside dunes, hay bales or other objects all day. They usually have their backs away from the sun, and their long back feathers can completely obscure the solar panel. That makes solar charging, especially during cloudy weather on short winter days, a challenge.

To correct this, we reset the duty cycle on the transmitters we’re using so they only phone home every third day — and they do it at 7 p.m., when the owls are up and active. It’s worked great — and if Assateague’s transmitter ever called in, it would download that new program, too. 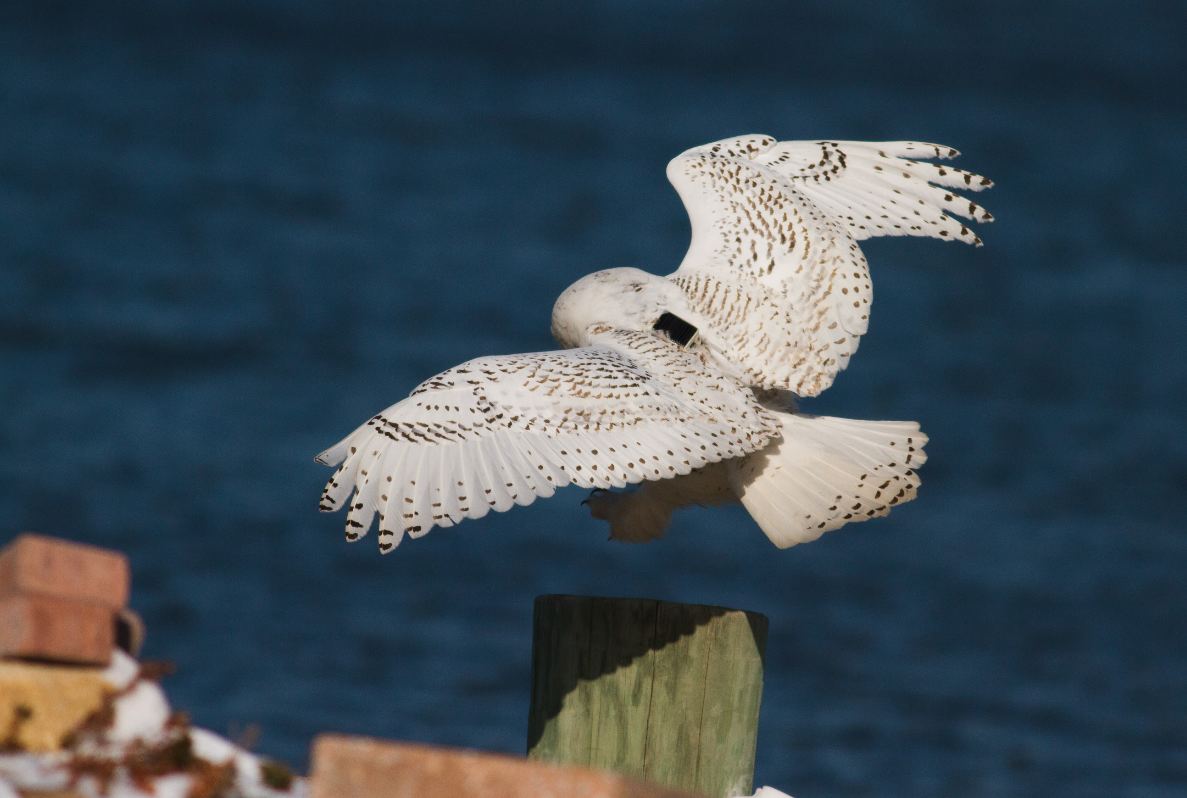 We were pleased to see that Assateague’s transmitter is still riding perfectly. (©Bob Fogg)

But we suspected Assateague’s battery had run down during a stormy period two weeks ago, and with daily attempts to dial home under the original duty cycle, kept draining the battery again before connecting.

The next day, it sent more, including his latest locations, which showed that this wandering owl seems to have found a home for the winter — he’s pretty much just where he was two weeks ago when we lost him, on the mainland side of lower Barnegat Bay, shifting between salt marsh and waterside vacation home developments.

Just to make sure Assateague was, in fact, OK (and not a scavenged carcass blowing around on the salt marsh) CTT programmer Bob Fogg, who lives in south Jersey, ran over Thursday afternoon. He was delighted to see our boy looking fine, and the transmitter in perfect position, and he got some great pictures.

Now that it’s on the new duty cycle, we expect Assateague’s transmitter will perform like the others, and give us regular every-third-day updates.

And we’re hoping that some sunny weather will eventually hit Wisconsin, which has been stuck in clouds and snow for weeks. We know from birder reports and photographs that Buena Vista, who was tagged Dec. 23, is still hunting the fields where he was tagged. But his transmitter is in the same fix that Assateague’s was.

The good news is, it takes a lot less battery power to record GPS locations than to dial out, so when BV does phone home, we should get a lot of the “missing” data from the past couple of weeks, at the same time that it downloads the revised duty cycle.

This is the first time anyone’s used solar GPS-GSM transmitters on snowy owls — in fact, on any species of owl. It’s been a learning process, the way science always is — sometimes frustrating, but always fascinating.

2 Comments on “Return of the prodigal owl”