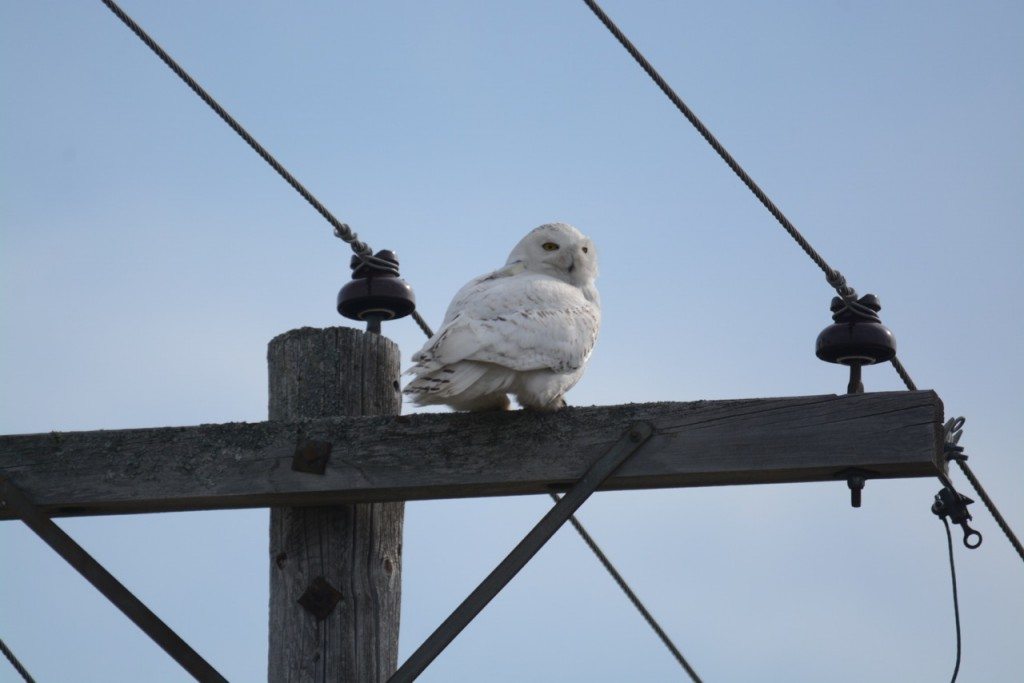 Oswegatchie, about three hours before what could prove to be his final transmission of the season on Sunday evening. (©Patricia and Daniel LaFortune)

It looks as though our last snowy may have gone north. We had a report from Oswegatchie’s transmitter on Sunday evening, showing him still hunting the area around Fitzroy Harbour, Ontario the previous three days.

But tonight, when he was due to check in again, there was nothing. The very warm weather in the East the past three days may have been the trigger he needed to finally join the rest of the crew en route to the Artic — at this point there are only a handful of stragglers below 50 degrees north latitude.

But we did have a very welcome, perhaps final gift from him. Not long after I downloaded his stored data on Sunday, I got an email with the subject line, “We saw Oswegatchie!”

It was from Patricia and Daniel LaFortune in Ottawa, who had gone out for a Sunday ride through the area Oswegatchie had been using, and found him along the road. “He was still hanging around there! I was happy to see him, he’s a beautiful bird,” Patricia said.

“He was perched on an hydro post on Galetta Side Rd., about 100 metres from Carp Rd. The area has farm houses, fields and where he was is roughly halfway between Carp Rd. and the train tracks.”

The LaFortunes included a great photo of our boy, which shows his transmitter riding nicely in the middle of his back. I also gulped a little, though, because Oswegatchie was perched between two electrical lines that he could easily span with his wings — with deadly consequences if he touched both wires, a fate that befell a fair number of snowy owls this winter.

But I suspect his disappearance had more to do with the rapidly advancing season and the inexorable pull of the north. If one of our birds should check in, of course, we’ll be sure to post an update — but for now, this may be the last regular report until things start to ramp up in autumn winter.