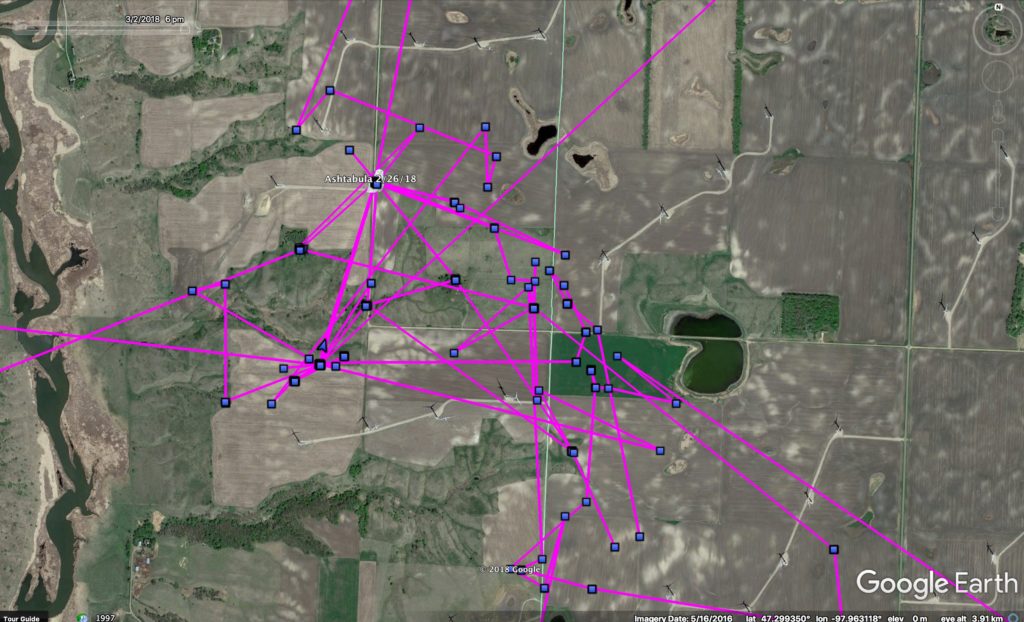 Although he avoided any problems, we breathed a sigh of relief when Ashtabula moved out of this 113-turbine wind farm in North Dakota. (©Project SNOWstorm and Google Earth)

The days are getting longer, and right on schedule, we’re seeing some restlessness start to appear among this winter’s cohort of owls. But there’s a lot of ground to cover this week, including the second “bomb cyclone” of the winter on the Northeast coast, an ice-queen owl on the Great Lakes, and a turbine-dodging bird on the prairies. Here are some of the highlights; check individual owls’ maps for the latest updates.

Several of our tagged owls that have been highly predictable this winter suddenly got a bit of wanderlust in the past week — likely the effect of warmer temps and longer days. In North Dakota, Ashtabula moved about 27 miles (43 km) north Feb. 13, and for the next two weeks spent much of his time flying below and among the 113 turbines of the Luverne Wind Farm, which straddles the Griggs and Steele county line. Although Ashtabula generally appeared to be avoiding the immediate vicinity of the 260-foot-tall turbines, we breathed a little easier when he moved farther north, out of the wind farm, the night of March 1-2. 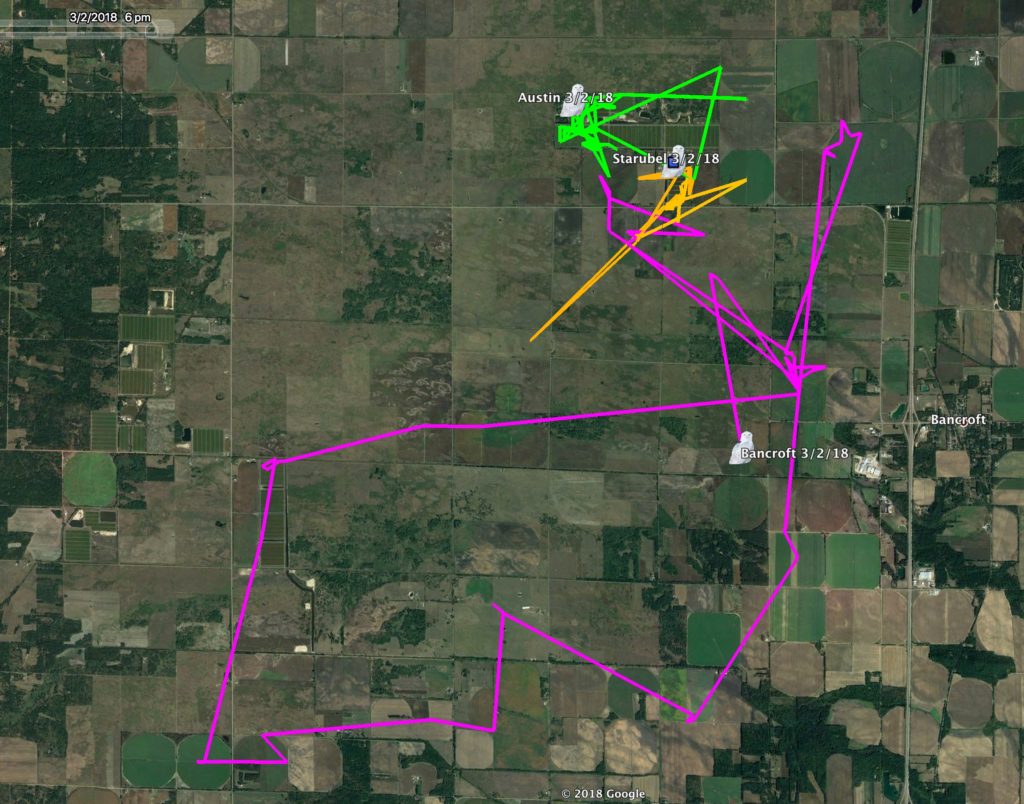 Was it spring or a new neighbor that prompted Bancroft to go for a wander? (©Project SNOWstorm and Google Earth)

Arlington, in Wisconsin, also took off on an unexpected flight, looping 117 miles (188 km) to north between Feb. 27 and March 1, the heading back to his winter territory north of Madison. He made a shorter exploratory flight a few weeks ago, too, so the season may be working its magic on him. Elsewhere in the Badger State, it may have been competition rather than spring that prompted Bancroft to fly up to 6 miles (10 km) from his winter territory, now that Straubel appears to be staking out part of it. Straubel, you’ll recall, is a big female that was relocated from the Green Bay airport, and it looks like she’s bumping Bancroft. Austin, another small male, is hanging tight to his spot on part of a commercial cranberry bog that Straubel is also using.

An overlay of Gichigami’s track (over the course of several weeks) with the Feb. 27 ice cover in southeastern Lake Superior. (©Project SNOWstorm, Google Earth and NOAA CoastWatch) 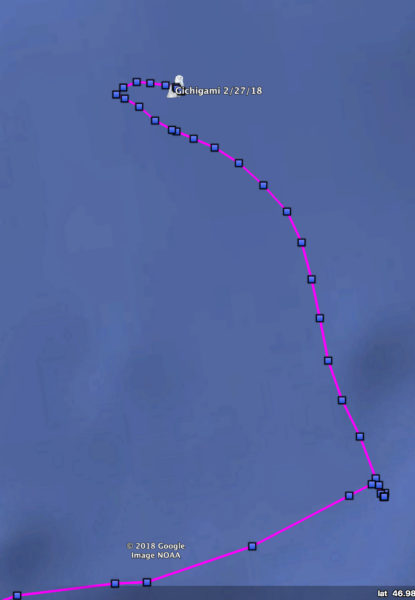 Evenly spaced hourly GPS locations are the sign of an owl riding on wind-drifting ice. (©Project SNOWstorm and Google Earth)

When we tagged Gichigami along the frozen shore of Lake Superior, we expected there might be long gaps when she was out of cell range on the lake, and that’s been the case. But this past week she checked in for the first time in a while, and uploaded a very cool, meandering track up to 23 miles (37 km) from shore. In all, she moved 313 miles (504 km) during the two weeks she was out of touch via cell modem.

Ice conditions on Lake Superior have changed dramatically in recent weeks, with a sharp decrease in ice on the eastern end of the lake almost from one day to the next, as temperatures and prevailing winds changed. But by overlaying NOAA CoastWatch satellite images with her track, we get a sense of how Gichigami has been riding on ice plates and floes, pushed by the wind — the very steady, even pace of the hourly position fixes on Feb. 27 show her ice raft was being nudged by the wind at about a third of a mile (0.5 km) per hour, then dropping to a third that pace by evening as the winds shifted and died. 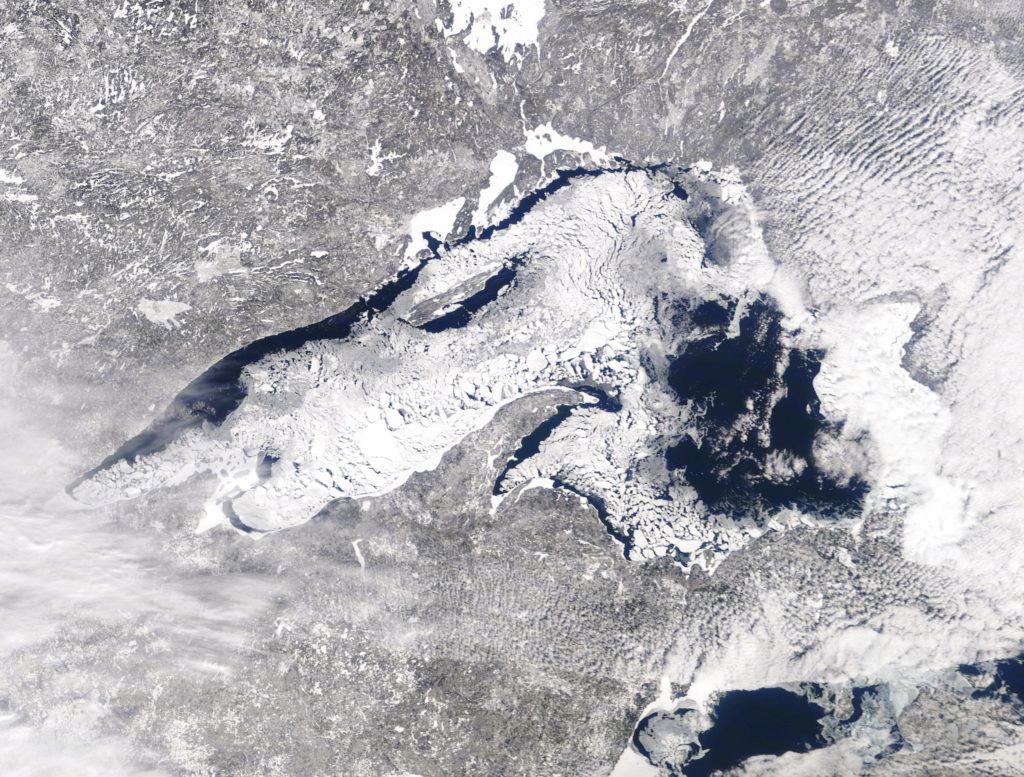 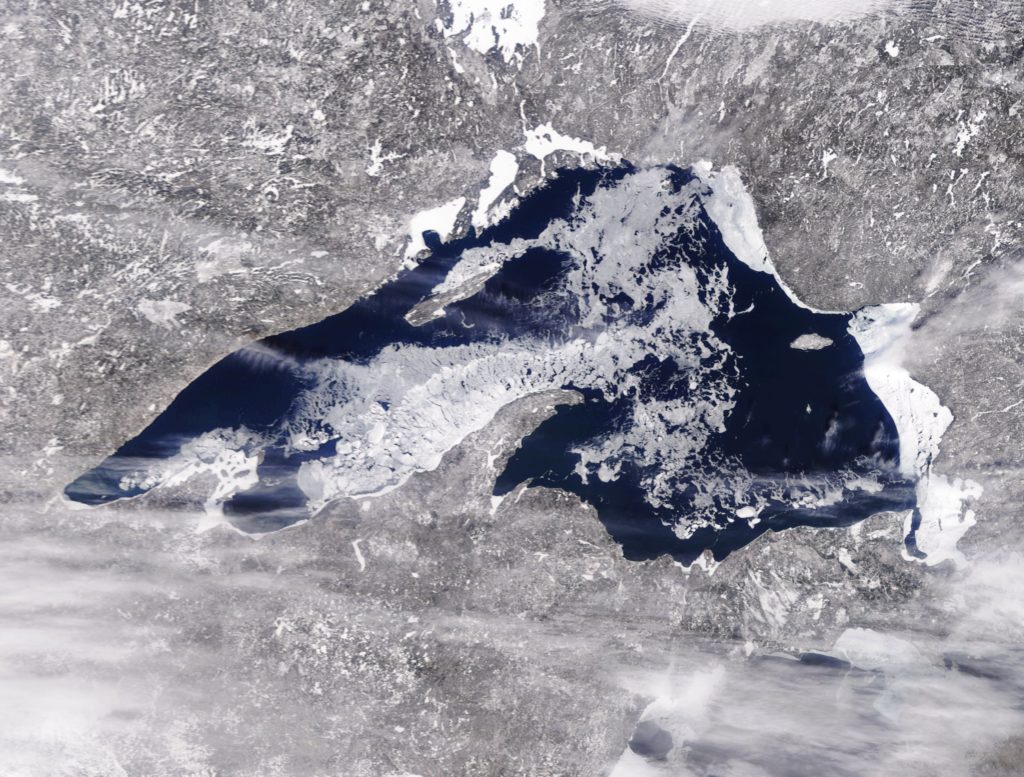 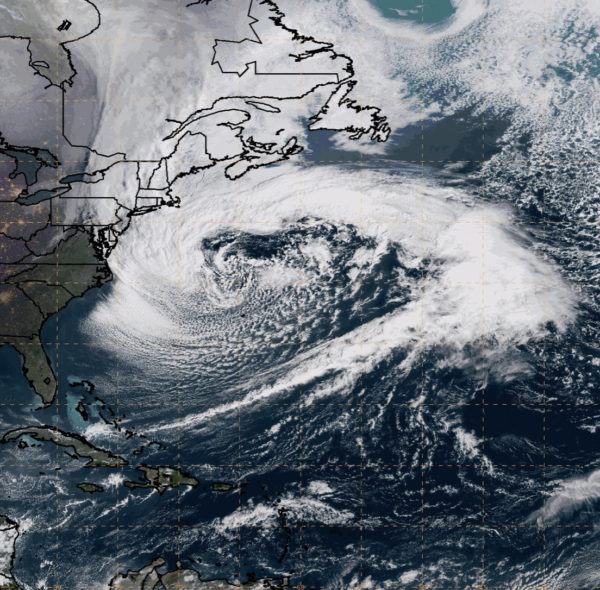 GOES satellite imagery of the huge nor’easter that hammered the Northeast coast Friday and Saturday. (NWS)

We’re also keeping a close eye on the six owls we have along the mid-Atlantic and Northeast coast, because for the second time this winter a huge nor’easter exhibiting what meteorologists call “explosive cyclogensis” has pasted the area from New Jersey to Maine. Peak wind gusts of 71 mph (114 kph) were recorded on Block Island, where just after dark on Friday Manisses appeared to be hunkered down a few hundred yards inland from Great Salt Pond. In the Blue Hills Reserve outside of Boston, Norman Smith reported a gust of 93 mph (150 kph), and he was concerned about Logan and the other snowies on the coast (though the tree that crashed through his daughter’s house was a more pressing worry). Logan appears to have ridden out the early stages of the storm near the Necco Candy factory and high school in Revere, just north of Boston, a town that had already been hit with heavy coastal flooding earlier in the day. We won’t get new position fixes on the birds until Sunday or Monday, so we’ll have to keep our fingers crossed, but Norman noted that Logan– unlike the other coastal owls we’re tracking this winter — is an experienced adult, which may help keep her out of trouble.

For the first time this winter, Emerald has moved off her small territory on Amherst Island for a significant period, spending time out on the frozen channel to the mainland before heading back. This may be spring and the lure of migrating waterfowl, but the island has also seen a tremendous increase in construction activity in recent weeks as a huge wind farm rises on its flat fields, and it may just be quieter on the ice with all the trucks and noise and road work. (Stella continues to use the offshore ice during the day and come ashore to hunt at night, but there’s an ever-shrinking area of ice around Amherst for her to use.) 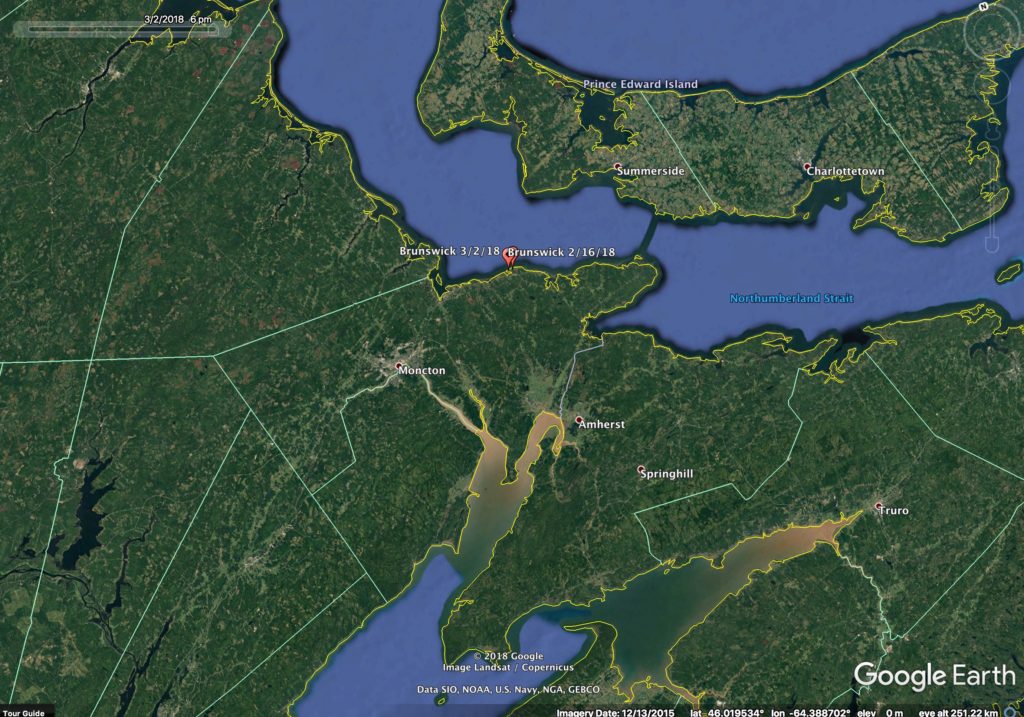 No data yet, but as Brunswick’s transmitter regains charge we should start hearing more from her on the New Brunswick coast. (©Project SNOWstorm and Google Earth)

Hardscrabble, Chickatawbut and Wells remain where they’ve been all winter in Ontario and Quebec — and Hardscrabble rebuffed a fresh attempt this week by our colleague Dave Okines to trap him and replace his transmitter. We got another brief check-in from Brunswick, up on the coast of New Brunswick at Cap-Pelé — none of her last two years’ worth of data has come through yet, but her transmitter is gaining voltage nicely and we’re hopeful we’ll start getting it before too long.

Gone Too Soon
Straubel, and the Weekly Roundup

3 Comments on “Shaking Things Up”