It’s very early in the season, but there is a lot happening on the snowy owl front already.

Significant numbers of snowies have been showing up as far south as Pennsylvania and New Jersey in the East, and southern Michigan and Wisconsin in the Midwest. Amherst Island in Lake Ontario had as many as 10 in recent days, and there are many more along the St. Lawrence/Ottawa river valleys, always a good area for them.

We’re gearing up for a new winter of field work, and waiting to hear from previously tagged owls moving back into cell range, but first, we have an update from the new project we started with colleagues in Alaska. Here’s the latest from SNOWstorm team member Jean-François Therrien at Hawk Mountain Sanctuary in Pennsylvania. 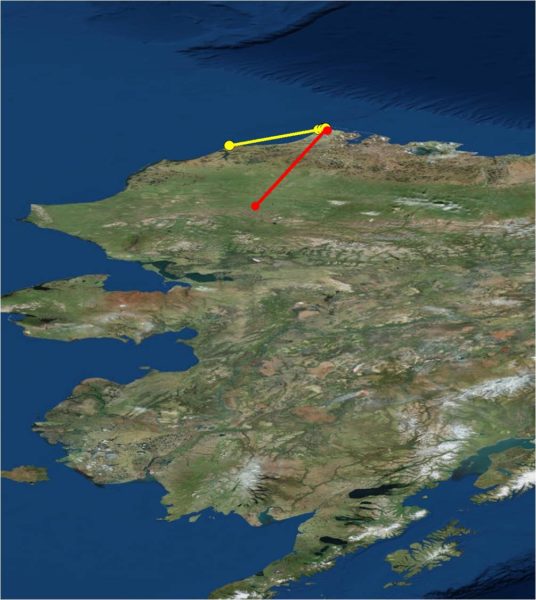 The first movements away from Utqiaġvik (Barrow) Alaska by two of the three young snowy owls we tagged this summer. (©Project SNOWstorm and Google Earth)

Back in early August, with the help of our colleague Denver Holt from the Owl Research Institute in Montana, we deployed satellite transmitters on three snowy owl chicks on their natal (birth) grounds in Utqiaġvik, Alaska — formerly known as Barrow. One of the main aims of this tracking project is to assess dispersal movements of young snowy owls, while another very important aspect is to determine their survival rate, from the moment they are born through their first year and beyond.

The survival rate is crucial to any population of wild animals, but often overlooked by researchers, especially for younger age classes. However, measuring survival also means learning when and where birds expire, and — especially with species like snowy owls that inhabit remote locations — that is never easy to document. With that in mind, our network of collaborators has engaged in this break-through project, hoping to shed light on these critical aspects of snowy owl conservation biology.

The three young snowy owls have been transmitting their locations ever since they were banded in early August. After showing some very limited movements around their respective nest sites, two of the birds have now travelled more than 62 and 137 miles (100 and 220 km)respectively. All three birds are still in Alaska, and the map shows where they were last located. This project has already allowed us to determine an approximate departure date when the young snowies leave their natal grounds.

The coming months are going to be exciting, and we’re eager to see where these young owls head and potentially settle for the winter. We will, of course, keep an eye out to see if the transmitters become stationary (a sign that mortality might have occurred), but we’re hoping for the best for them.

First Across the Finish Line
A Shout-out from James Bay

8 Comments on “Snowies on the Move”