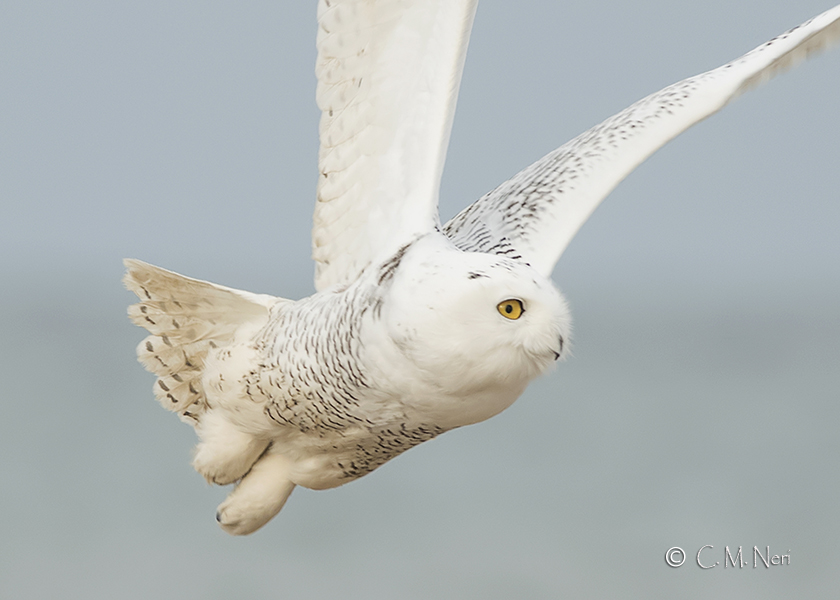 There’s a saying that science isn’t science until it’s communicated. We have always tried to share our findings in an easily accessible way with the general public, since that’s where 100 percent of Project SNOWstorm’s funding comes from.

But it’s just as important for us to get our rigorous analyses and research into the scientific literature through conference presentations and, especially, peer-reviewed professional journals. Those publications are the foundational building blocks of science — and we’ve been busy on that front, too.

Since we began eight years ago, Project SNOWstorm members and collaborators have published 10 major papers on snowy owl movements and ecology — with five new publications in various prestigious journals just since 2020, on topics ranging from the spring migratory movements to winter survival of telemetry-tracked snowy owls. Some of these papers, like the Becca McCabe’s recent article on the causes of mortality in wintering snowy owls, are of obvious conservation importance. We have more papers in the pipeline right now, at various stages of submission and review, including a major paper summarizing our work on relocating owls from airports.

Here’s a quick rundown of the most recent journal articles:

Curk et al. 2020 compared the migration patterns of three top predator species of the tundra, the snowy owl, rough-legged hawk and peregrine falcon, and found that all three species timed their spring migration with the progression of snowmelt, with snowy owls returning to their northern breeding areas ahead of snowmelt.

McCabe et al. 2021 examined winter movement patterns of snowy owls and revealed that owls wintering near their southern range limit across North America showed large variation in space use with some individuals remaining resident on ranges of a few square kilometers and others moving nomadically over hundreds of kilometers. In addition, their findings show that mobility of wintering owls increased west to east, and north to south, and was more common along with bodies of water than in croplands. (Here is a cool infographic explaining the research.)

Brown et al. 2021 analyzed spring migratory movements of 24 telemetry-tracked owls, and found that snowy owls had a higher probability of having a stopover at the beginning of their migration than at the end, suggesting owls may be using stopovers primarily to rest and refuel and not for selecting summer settlement sites in the Arctic. (Here’s a neat animation showing the summer movements of 24 snowy owls.)

McCabe et al. 2021 combined telemetry and necropsy data from more than 20 years to record timing and causes of mortality for wintering snowy owls in North America. They found that mortality was more than four times higher in irruption years than non-irruption years, but only for immatures, and occurred disproportionately in early winter for immatures, but not adults. Mortality was also higher in eastern North America, where owl abundance fluctuates considerably between years, compared to core winter regions of the Arctic and Prairies where populations are more stable. In addition, mortality was associated with human activity, especially vehicle collisions.

As with everything we do, these contribution to our understanding of snowy owls have been made possible by the individuals and organizations who have supported Project SNOWstorm since our inception in 2013. Thank you.

Badger's Last Flight
We Fly Because of You