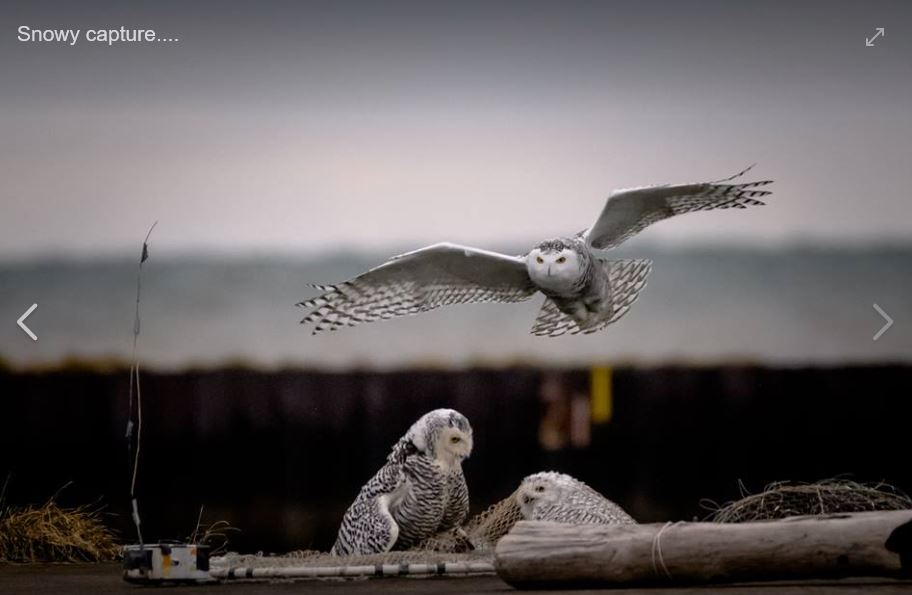 On Sunday, Tom McDonald and Melissa Mance Coniglio were trapping snowies at Fair Haven Beach on Little Sodus Bay, near Sterling, New York, on the southern shore of Lake Ontario. Working one bird, they caught the attention of two others. With the first owl already captured, a second owl came in as well, with a third flying around — an incredible scene caught by photographer Kelly Lukaczyk.

” All three snowies were competing within a couple feet of each other,” Tom said. “I ended up capturing two out of three, as the last one headed west toward Sodus Bay.”

One of the birds, a juvenile female Tom dubbed Sterling, got a transmitter as well as a band. Here’s how it looked as Tom and Melissa were fitting Sterling with her solar-powered unit, which at about 38 grams weighs less than 2 percent of the owl’s total mass. 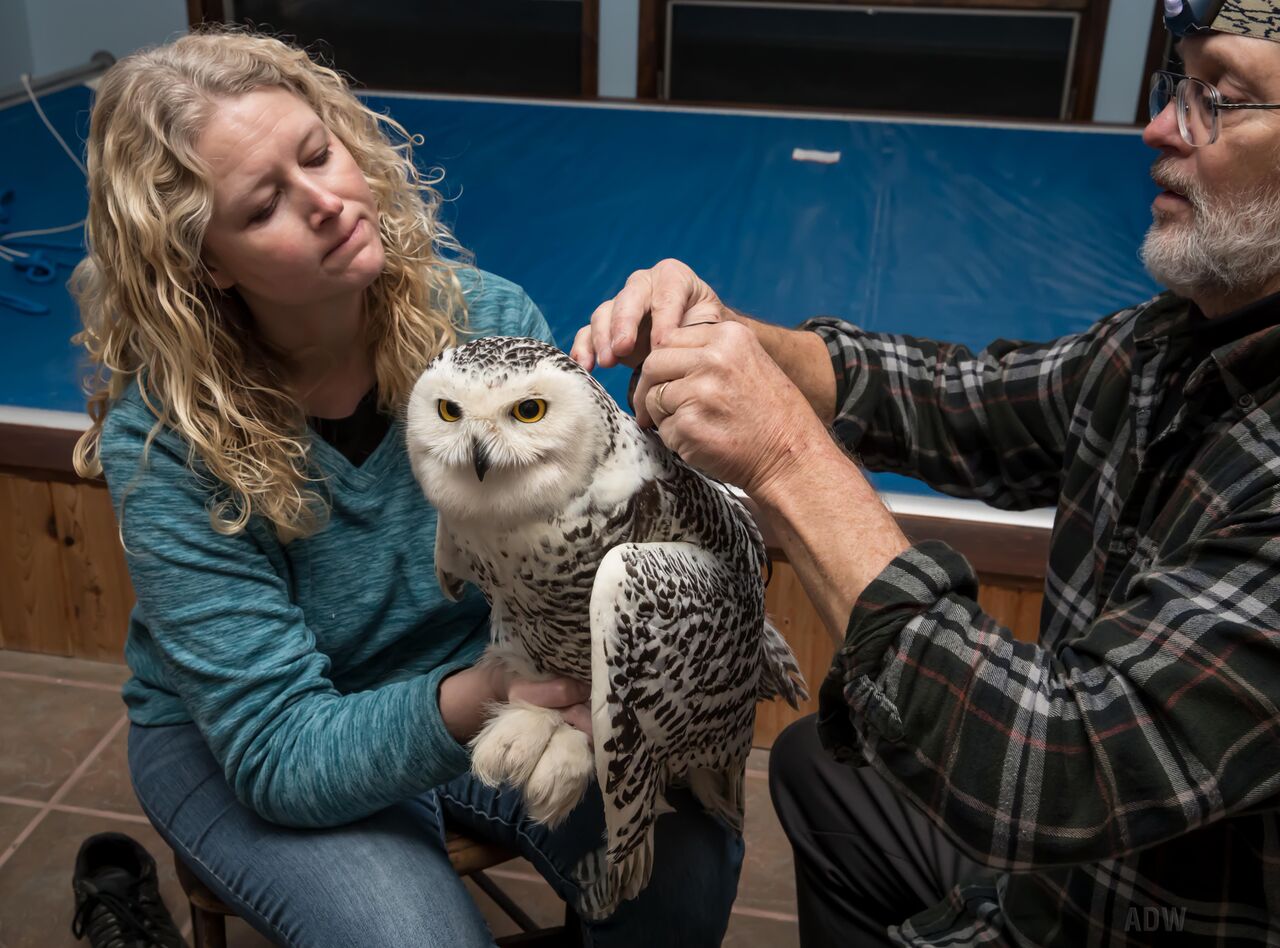 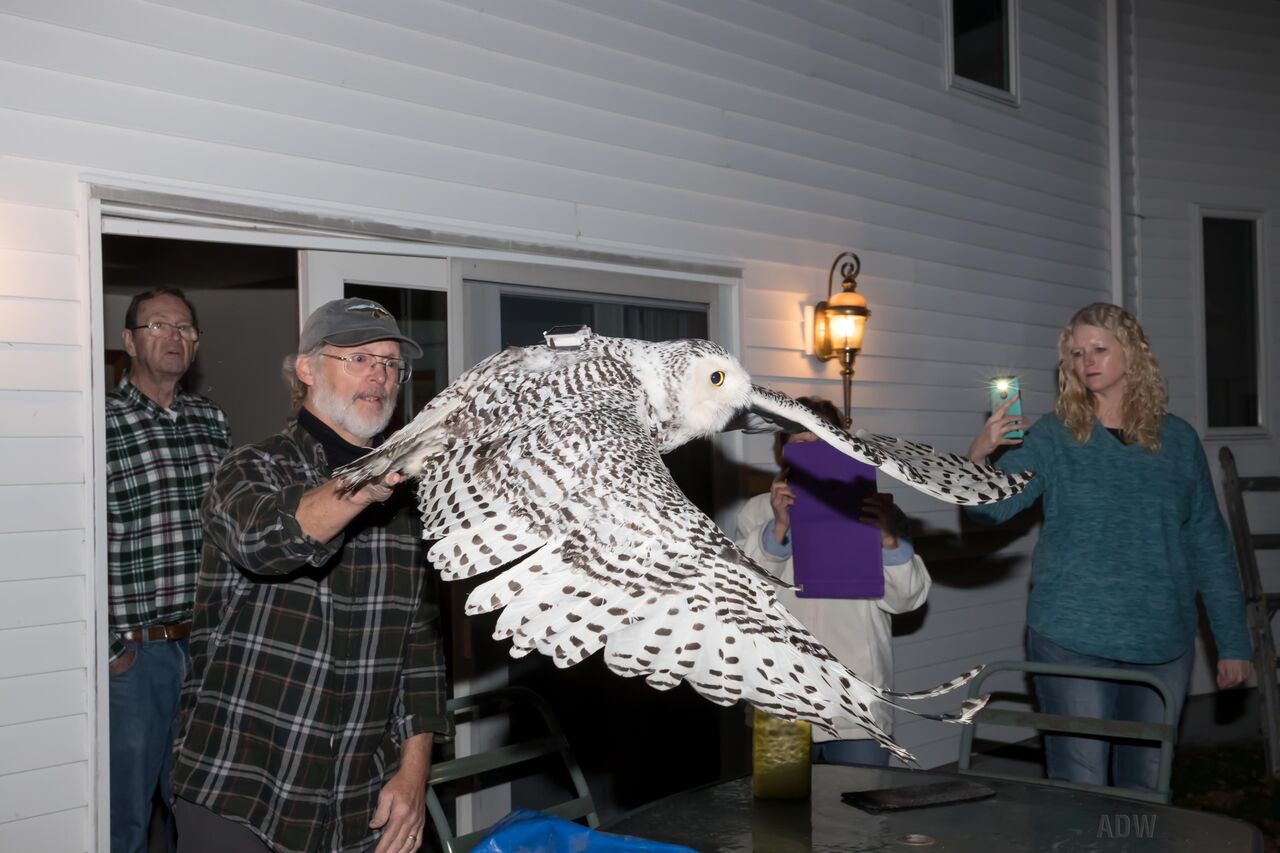 Out the door and away she goes — Sterling takes off with her new CTT transmitter tracking her location. (©Aaron Winters)

One reason we’ve been working hard to tag owls as early as possible this year is because we want to document their movements in the first weeks after arrival, before they settle down — and thus help us understand how widely they move, and how they find their eventual winter territories. Sterling and Hilton (the owl Tom tagged last week) have been providing just that information. 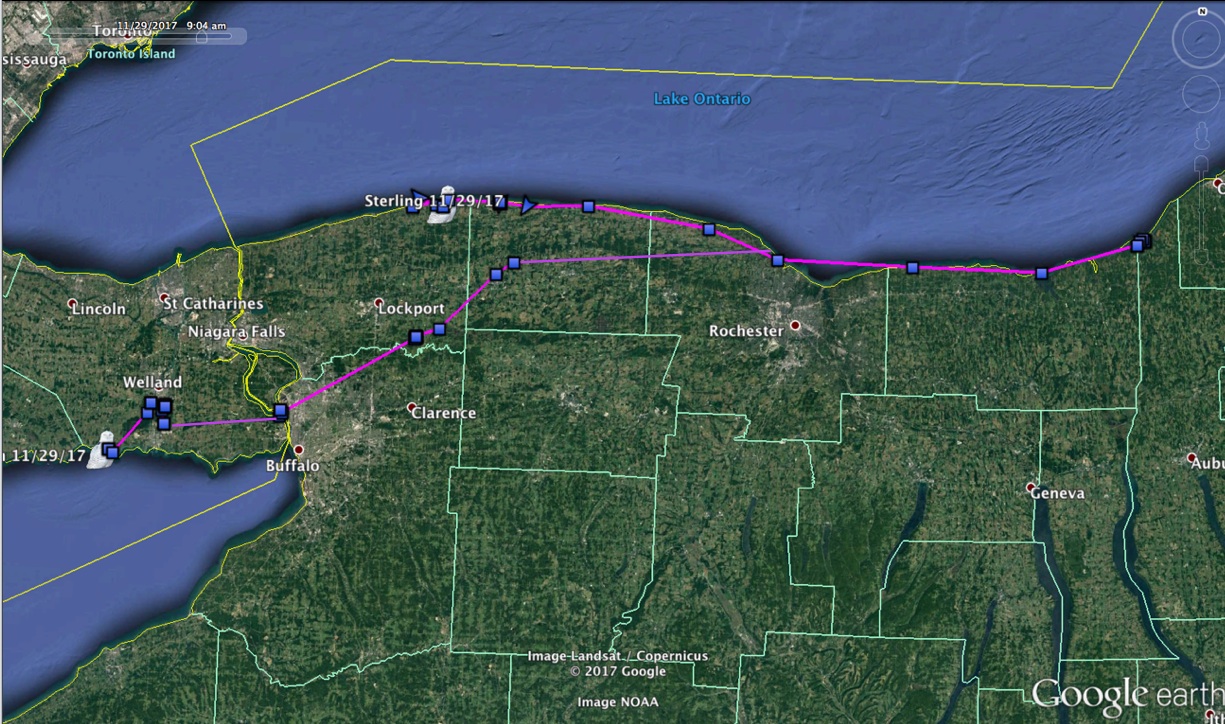 Sterling (top) and Hilton have both moved far to the west of their original banding locations — the kind of early season movements we’re trying to document this winter. (©Project SNOWstorm and Google Earth)

Hilton, who was tagged Nov. 24 at Braddock Bay near Rochester, NY, quickly moved southwest to the Niagara River, into southeastern Ontario and on Wednesday night was southwest of Welland, ON, near Morgan Point, a straight-line distance of 145 km (90 miles).

Sterling was also on the move, too. Within two days, she’d flown 98 miles (158 km) due west along the Lake Ontario shore, and Wednesday night was in Niagara County north of the town of Somerset, NY.

As I said yesterday, things have been happening at breakneck speed around here, as this winter’s irruption starts to fully take shape and all the moving part at Project SNOWstorm get into gear. It may take us a day or two to get maps up for these newest owls…and Hilton and Sterling aren’t the only ones, as you’ll soon learn.

We’ve had banders in the field from the prairies to New England, and south to the Delmarva Peninsula in the mid-Atlantic — which is where SNOWstorm co-founder Steve Huy, for example, was trapping last weekend. Steve covered Maryland from Eastern Neck NWR on the Chesapeake Bay to Assateague Island on the Atlantic, then up to Rehobeth, DE, and also had a state park ranger driving the shore from Cape Henlopen, DE, to the Maryland line, looking for snowies. All Steve found for his trouble was a few big snowy owl pellets, and the head of a laughing gull that provided the owl with dinner.

“When I did leave (thinking for home) I got a call from the ranger that an owl appeared at Henlopen,” Steve said. “It was 90 minutes away and dusk was about 75 minutes away. So I raced back across the Delmarva. I [climbed] in the back of a pick-up, setting the bow springs and jacketing a pigeon, as it raced through the park and then down the beach, but I missed that owl by a few minutes.” Sometimes you get the owl, and sometimes the owl just goes off and gets dinner without you.

Island Beach and Lenape, Down the Shore
Chickatawbut and Wells Come Back