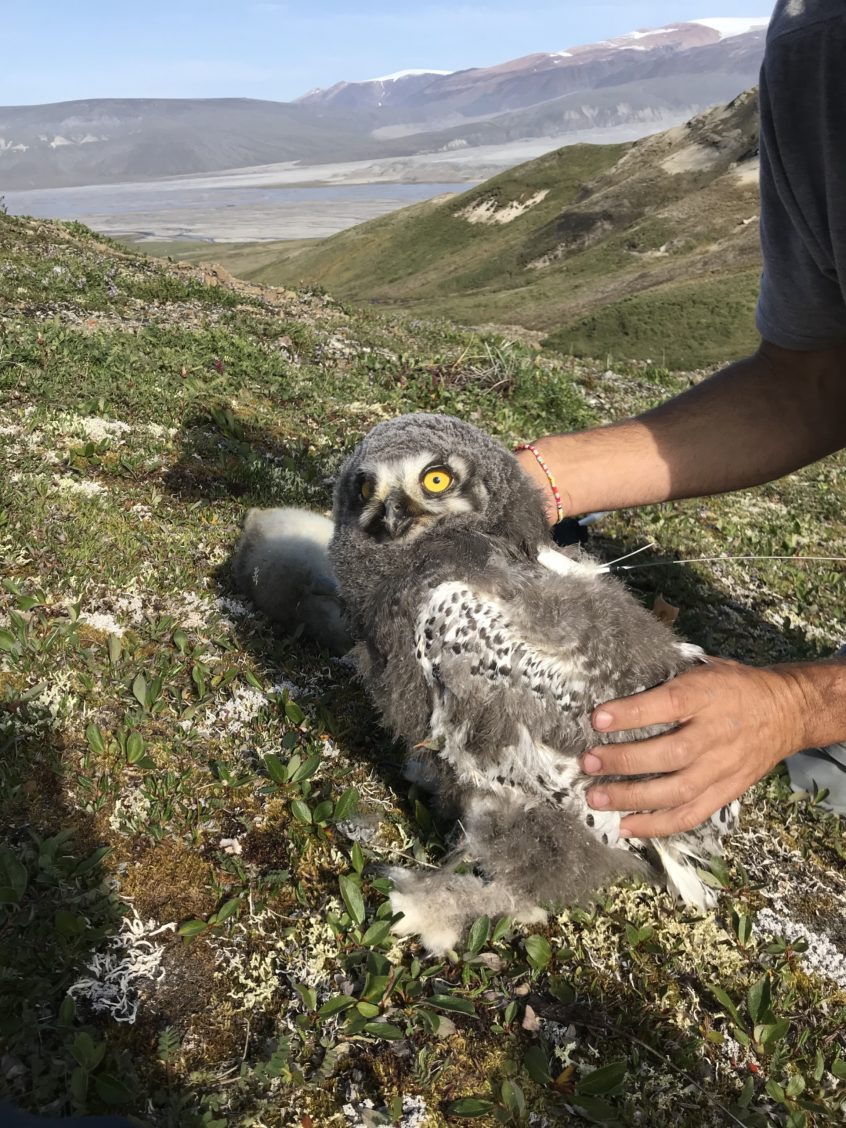 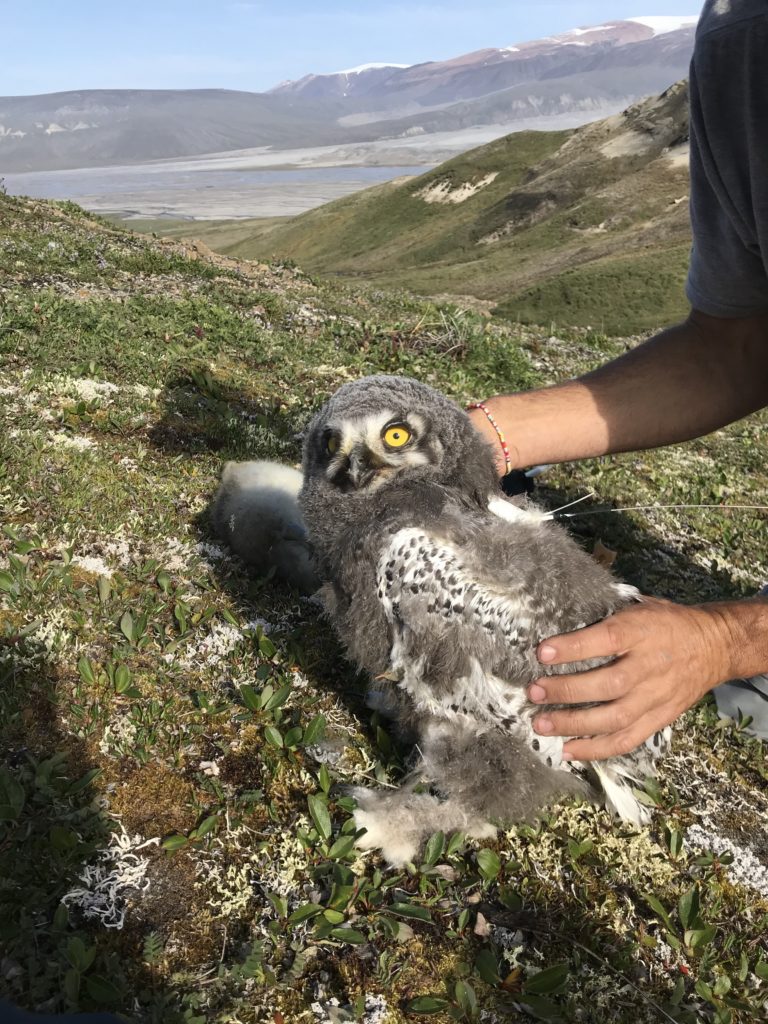 Freshly fitted with a small satellite transmitter, this young snowy owl was one of six tagged on Bylot Island in the Canadian Arctic this summer. (J.F. Therrien)

(Again this year, SNOWstorm team member Jean-François Therrien of Hawk Mountain Sanctuary was in the Canadian Arctic studying nesting snowy owls with his colleagues at Laval University in Quebec — and expanding one of our most exciting research projects. Here’s his 2019 report.)

After several years of low lemming abundance, and no breeding owls, on our long-term study site of Bylot Island in the high Canadian Arctic, our hopes were high for summer 2019 – and, at last, they were founded! Indeed, back in March our Inuit colleagues from the community of Pond Inlet were already excited to see lemming tracks in the snow.

As soon as the first members of our extended scientific crew arrived on Bylot in early May, they confirmed seeing lots of lemming sign (winter nests, scat, tracks and live individuals), as well as activity at Arctic fox dens and some snowy owls flying around, although not yet on nests. Soon, however, we were thrilled to find nine snowy owl nests in early June and monitor them until the owlets fledged in August.

Following snowy owl pairs as they raise their clutches is a very exciting and rewarding experience. The total number of nests this summer on Bylot was, however, nowhere as great as in previous “high lemming years.” Indeed, at the same site in 2014, we encountered a record high of 114 such nests. In other “snowy owl years” at the site, we typically find at least 15 to 25 nests. These observations highlight the characteristic irruptive nature of snowy owls: numbers vary tremendously from year to year.

A very similar pattern occurred at the very northern tip of Canada, at Alert, in Nunavut, the closest anyone can stand to the North Pole. Up there, our Canadian colleagues monitored a handful of snowy owl nests, where parents and young were feasting on collared lemmings. The only other places harboring nesting snowy owls that we know of during the summer of 2019 were the western Taymyr Peninsula in Russia, and around Utqiagvik (formerly Barrow), Alaska. 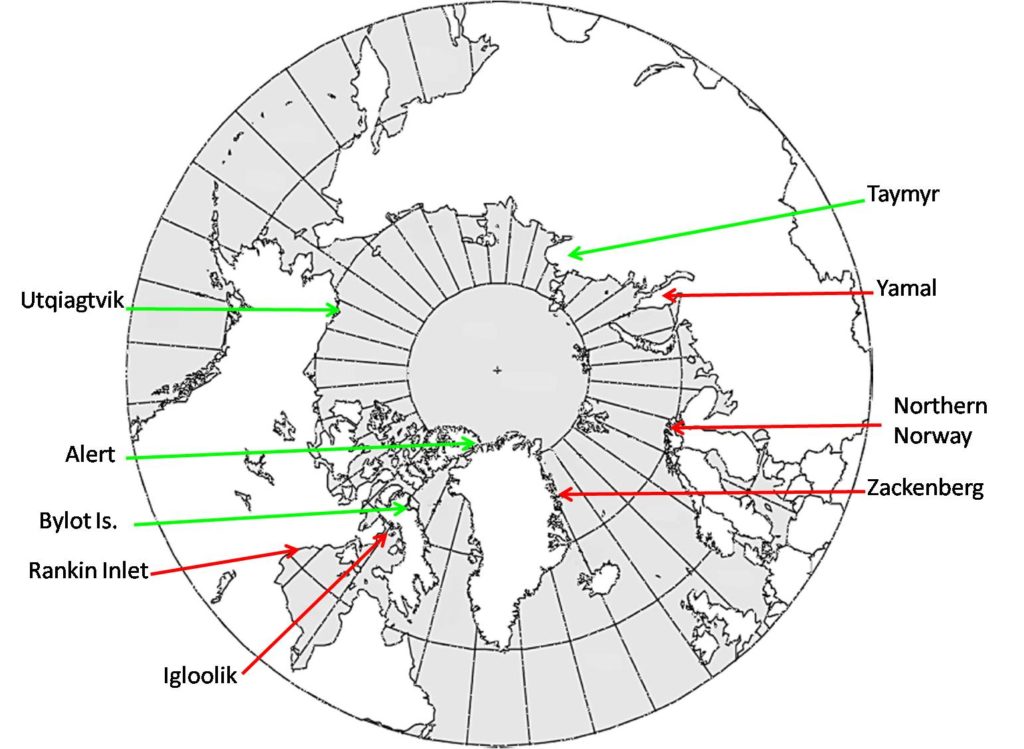 Locations around the Arctic where snowy owls did (but, in red, mostly did not) nest this summer.

These observations contrast with the situation encountered elsewhere in the circumpolar Arctic. Colleagues from Rankin Inlet and Igloolik in Canada, Zackenberg in Greenland, the Yamal Peninsula in Russia, as well as northern Norway, all reported no breeding owls this summer. Given the fluctuating nature of lemmings and owls, this phenomenon is not uncommon. However, none of the sites occupied by nesting owls in 2019 reported incredible numbers and we are now busy putting it all together to get a global snowy owl population estimate.

But back to Bylot Island, where in late July we expanded one of the most exciting research projects I’ve ever been involved — to equip young snowy owls with light-weight satellite transmitters, just as they were about to fledge. We chose this technology to answer very specific questions — juvenile dispersal from the nesting area, and survival rates — which wouldn’t be possible using the GSM technology we normally use, given the very scanty cell phone network at northern latitudes.

We piloted this study last summer in Utqiagvik with our colleagues at the Owl Research Institute, tagging three chicks that appear not to have survived their first winter. This summer, we tagged six fledglings on Bylot Island. These transmitters have been sending locations every three weeks, and we can now see the first movements of these young snowy owls from their natal grounds — mostly on Bylot, although one chick moved to neighboring Baffin Island. 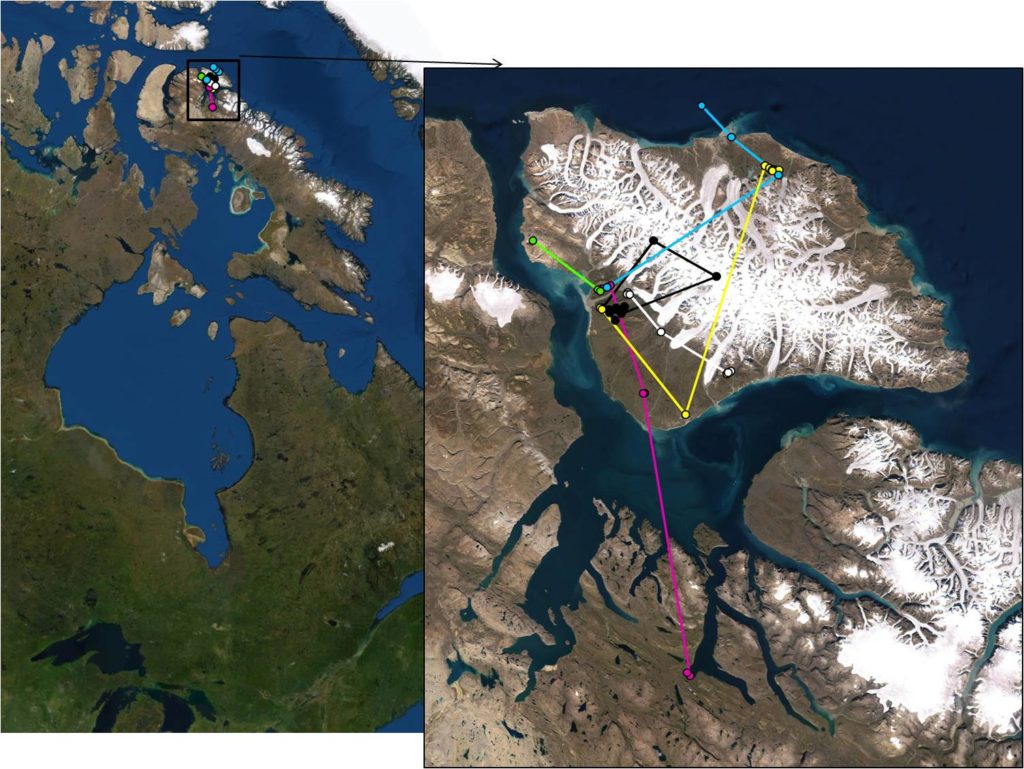 Bylot Island in the Canadian Arctic and (inset, right) the initial tracks of six juvenile snowy owls tagged in July.

We hope for the best for these young snowies, but we know the odds are against them. Previous small studies tagging juveniles in Greenland, by our colleagues in the International Snowy Owl Working Group, suggest that mortality is very high in a young owl’s first weeks and months. But we know less about this time in a snowy owl’s life than any other, and understanding juvenile movements and mortality will be critical to building a picture of the species’ entire life cycle.

Every autumn, we make a prediction for the snowy owl flight in the upcoming winter, based on the breeding situation of the previous summer. So, overall, we were happy to see nesting snowy owls on Bylot, but the number of nests and the number of fledged owlets were lower than in some other years. I would then expect to see some owls coming to our latitudes, but probably nowhere near what we have seen in some winters (everyone remember winter 2013-2014!). I’ve said this over and over again: Snowy owls have a tendency to surprise us. So we’ll have to wait and see how winter 2019-20 unfolds.

(SNOWstorm team member Dr. J.F. Therrien is senior scientist at Hawk Mountain Sanctuary in Pennsylvania, and has been studying snowy owls in the Arctic for years with Laval University in Québec).

4 Comments on “Summer in the Arctic — Following the Kids”