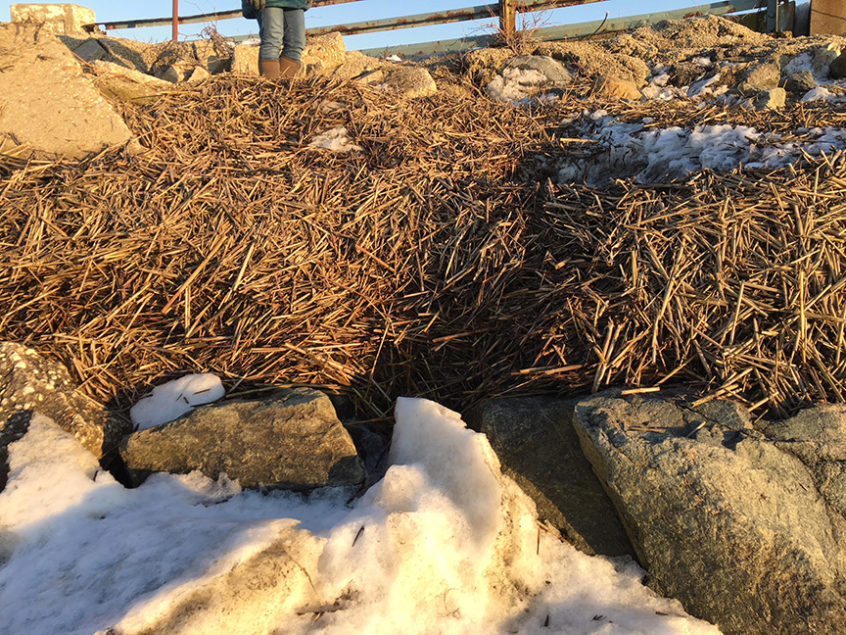 For the second time this winter, we’ve lost a tagged owl — Higbee, one of the three juvenile males we’ve come to think of as the “Jersey Boys.” And while the immediate cause was a vehicle collision, it occurred during an historically big coastal storm that we initially believed all three owls had survived. We became aware that something was … END_OF_DOCUMENT_TOKEN_TO_BE_REPLACED 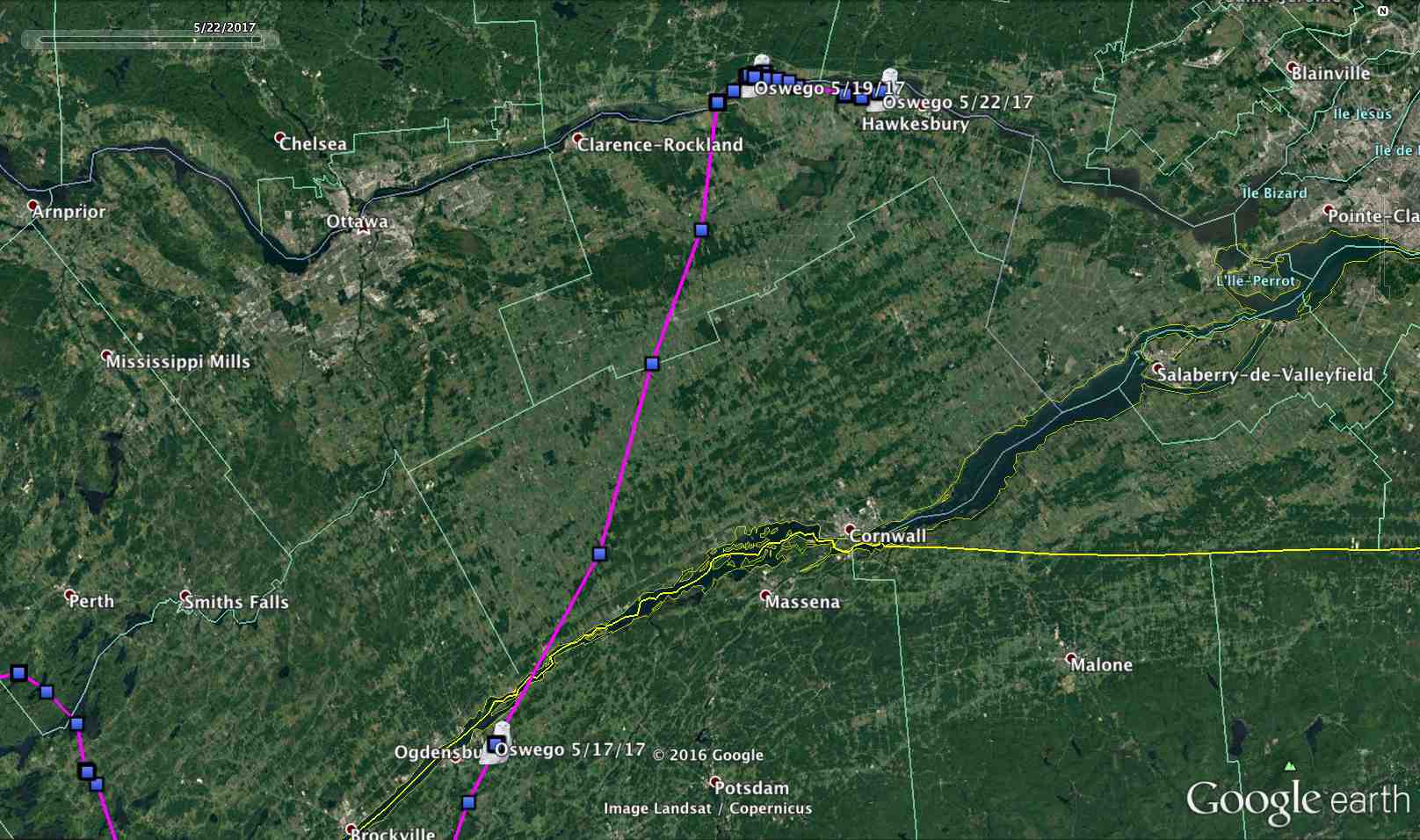 We’re still watching Oswego, who is — very, very slowly — making her way north. Late last week she’d been on the St. Lawrence River near Ogdensburg, New York, but on Thursday the 18th she flew north, moving across southern Ontario and landing on Grande-Presqu’île, an island in the Ottawa River that is partially included in Plaisance National Park. After … END_OF_DOCUMENT_TOKEN_TO_BE_REPLACED 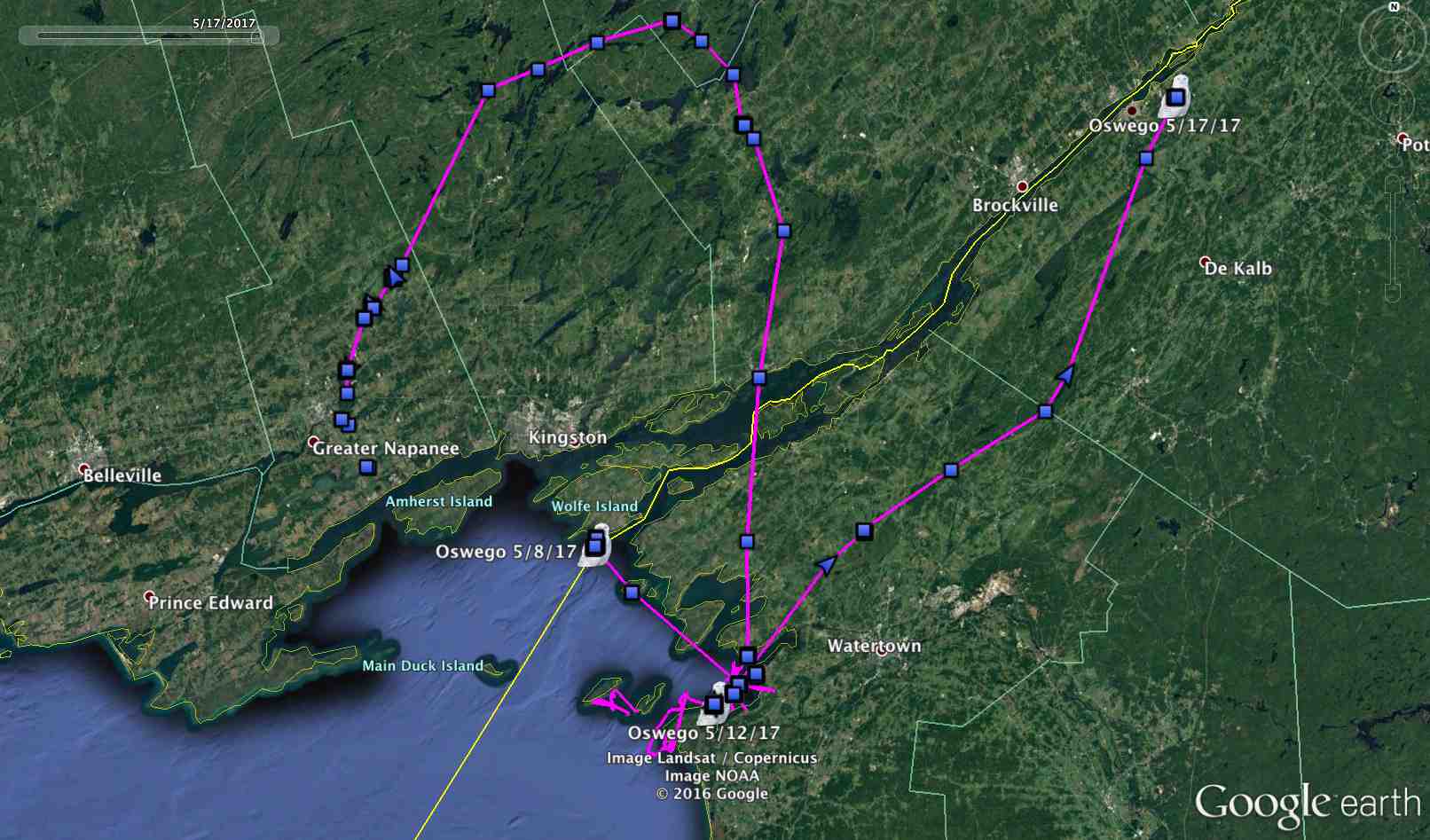 Here in the Northeast, after a wet and cold start to May the weather suddenly feels as though it’s been borrowed from summer — yet one of the owls of winter is still hanging around. The question, though, is for how much longer. Oswego, the young female tagged in January by Tom McDonald in Oswego, New York, is the only … END_OF_DOCUMENT_TOKEN_TO_BE_REPLACED 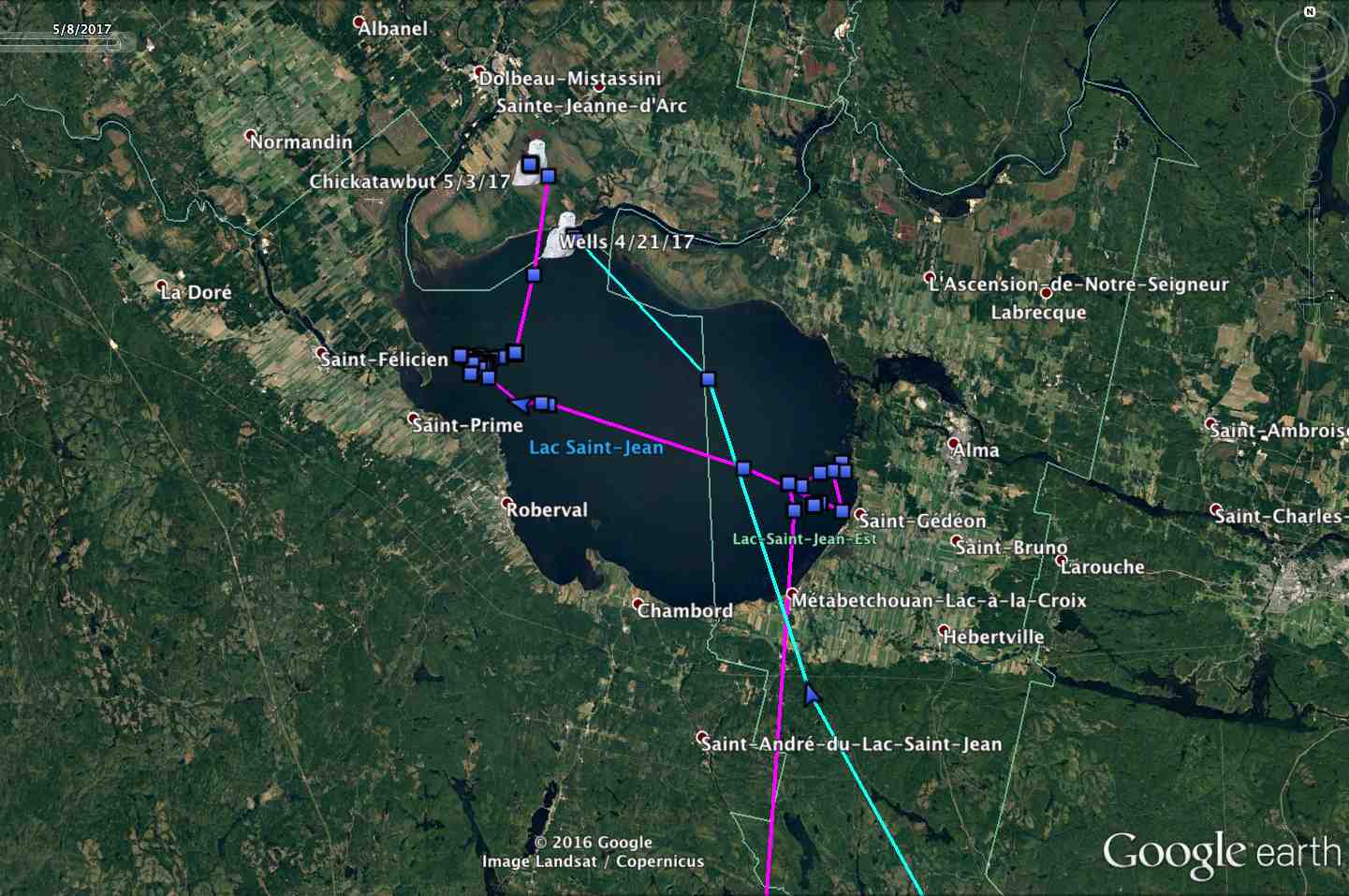 It’s been a while since we’ve posted an update, which doesn’t mean nothing’s been happening on the snowy owl front — just that we’ve all been incredibly busy. (SNOWstorm is our passion, but it isn’t anyone’s day job, and sometimes work gets in the way.) But the fact is that the winter season is winding down, and one by one, … END_OF_DOCUMENT_TOKEN_TO_BE_REPLACED 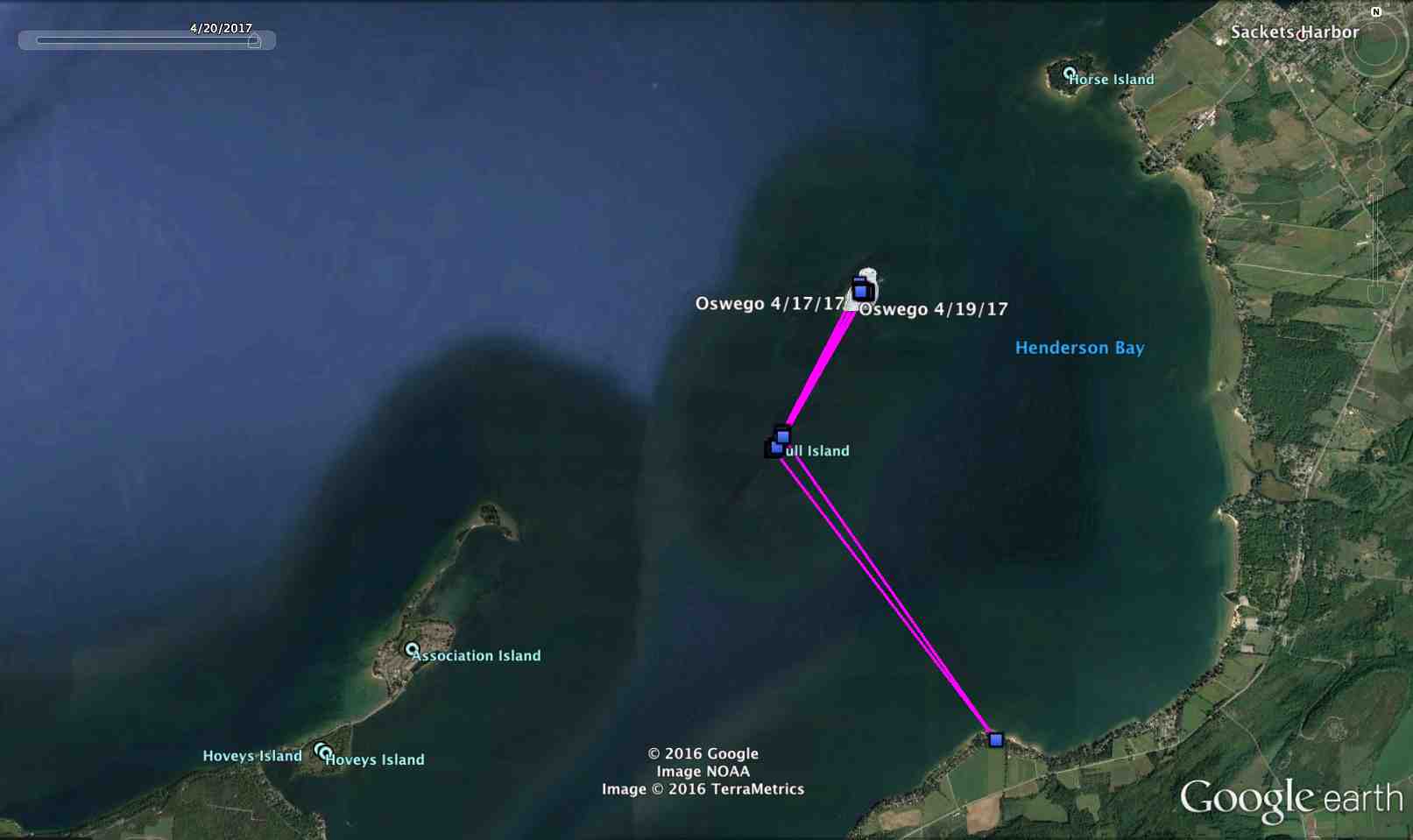 We’ve seen some big movements within the past week, and only one tagged owl (that we know of) remains on its wintering grounds. That one is Oswego, who is still hanging out on little Bass Island in eastern Lake Ontario, with occasional side trips to the mainland and even tinier Gull Island — this last a state wildlife management area with nesting … END_OF_DOCUMENT_TOKEN_TO_BE_REPLACED 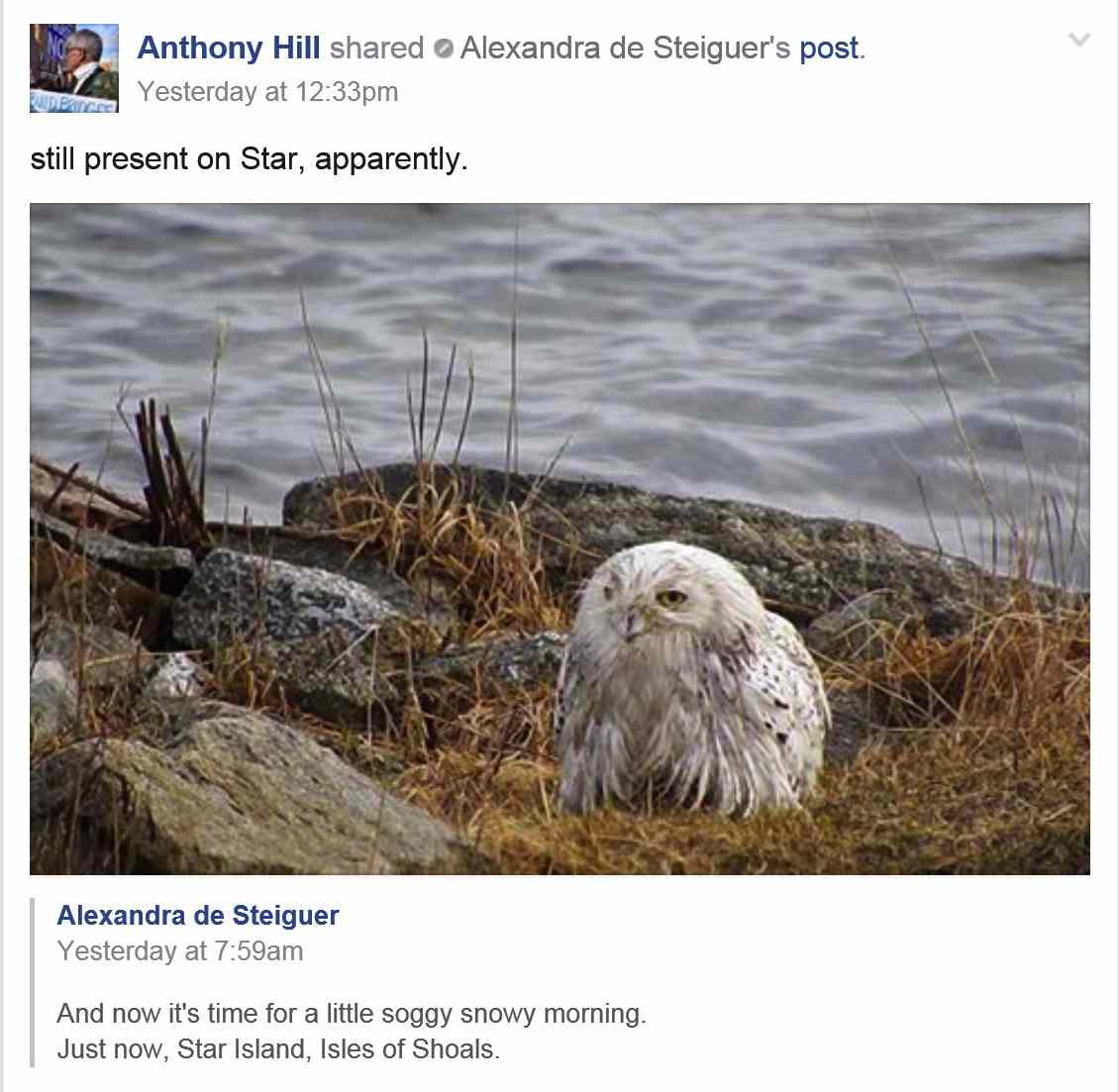 More and more snowies are moving north, dropping out of cell range for the summer — but we were pleased to get a big data dump from Oswego, who had been AWOL for the past month. Oswego, you’ll recall, had slipped off our radar at the beginning of March, after her transmitter showed a curious lack of solar recharge. Unsure … END_OF_DOCUMENT_TOKEN_TO_BE_REPLACED 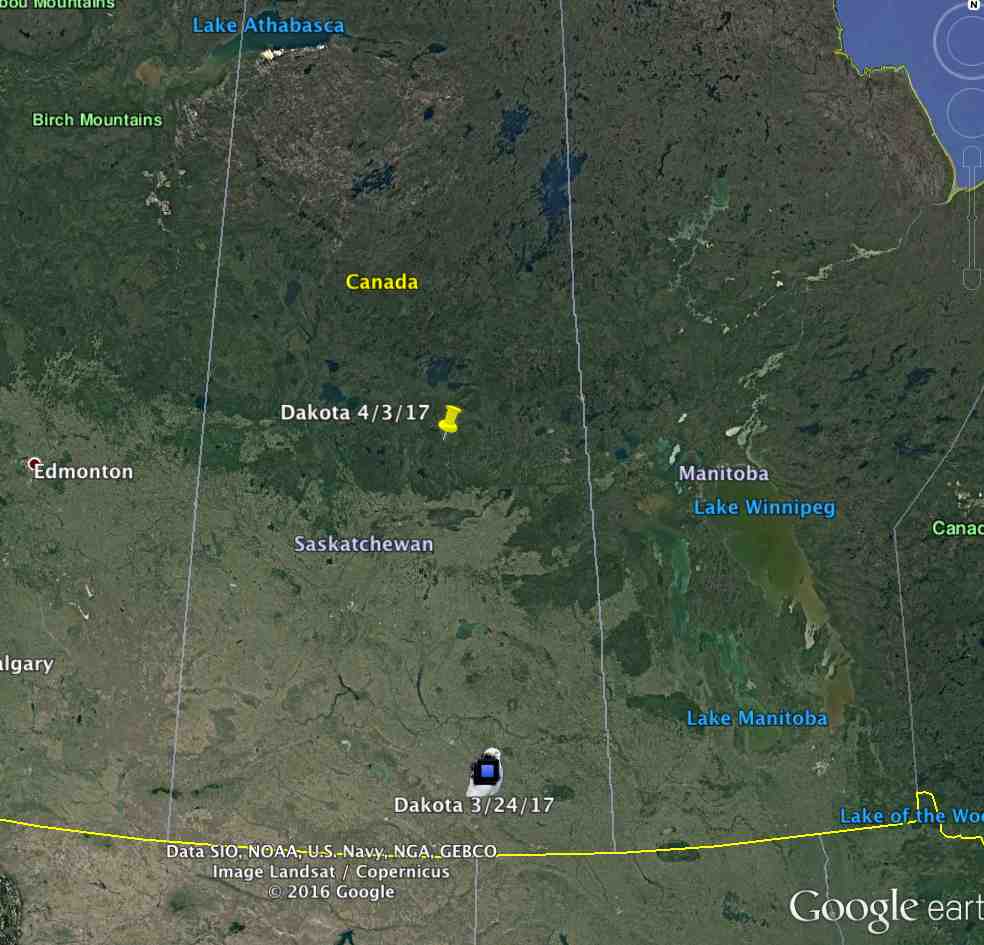 Due to a glitch, this update scheduled for Tuesday April 4 didn’t post — sorry for the delay, and we’ll have a further update on the latest movements of the owls in another day or so. The Project SNOWstorm team ——————— It’s definitely spring, and robins and geese aren’t the only birds making serious tracks to the north. After … END_OF_DOCUMENT_TOKEN_TO_BE_REPLACED 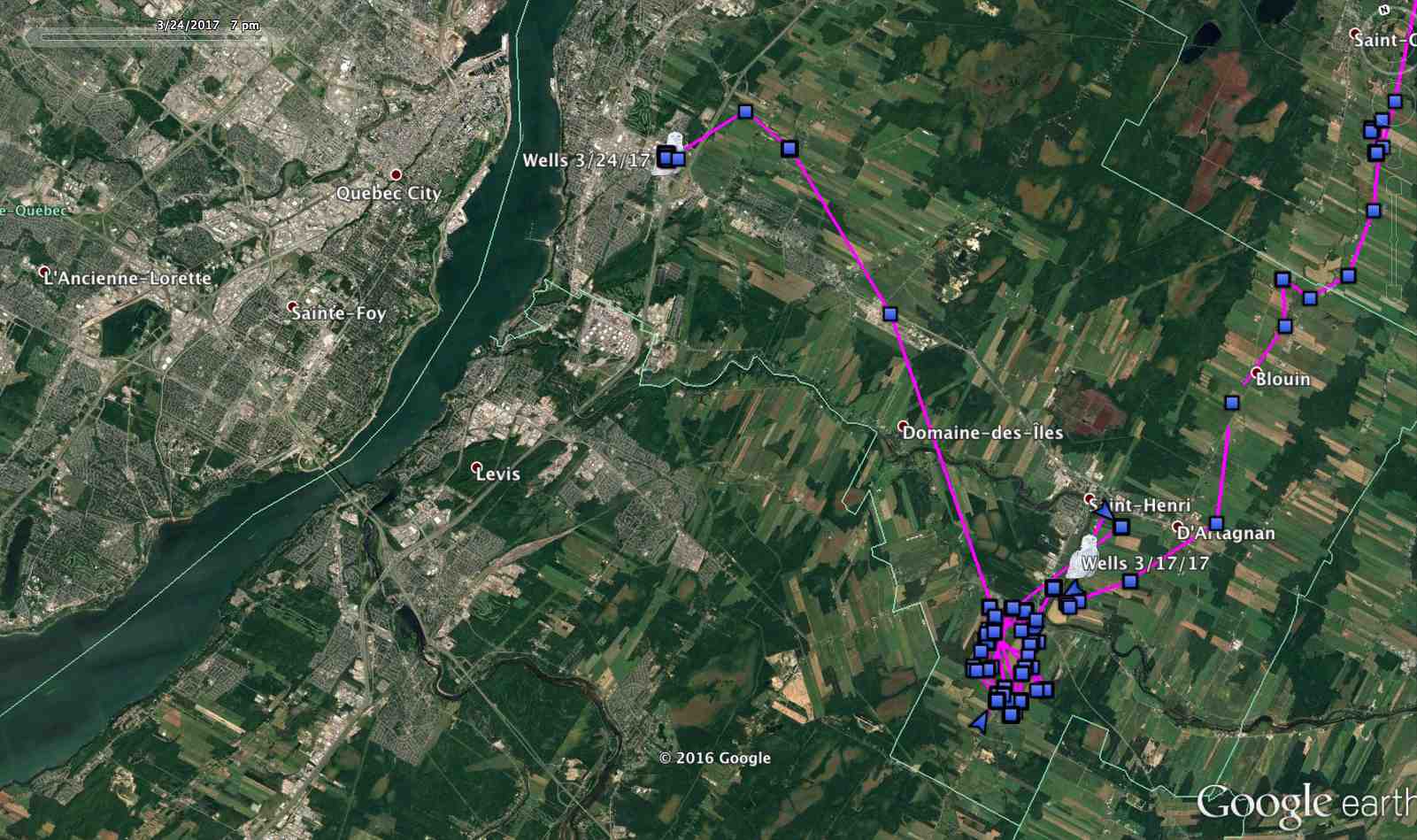 A fairly quiet report this week, although several of our birds continue to show signs of seasonal wanderlust, with several of them making looping rambles that wound up where they started. Running down the roster from east to west, Wells remains in southern Quebec along the St. Lawrence River. After spending much of last week near the town of Saint-Henri, … END_OF_DOCUMENT_TOKEN_TO_BE_REPLACED 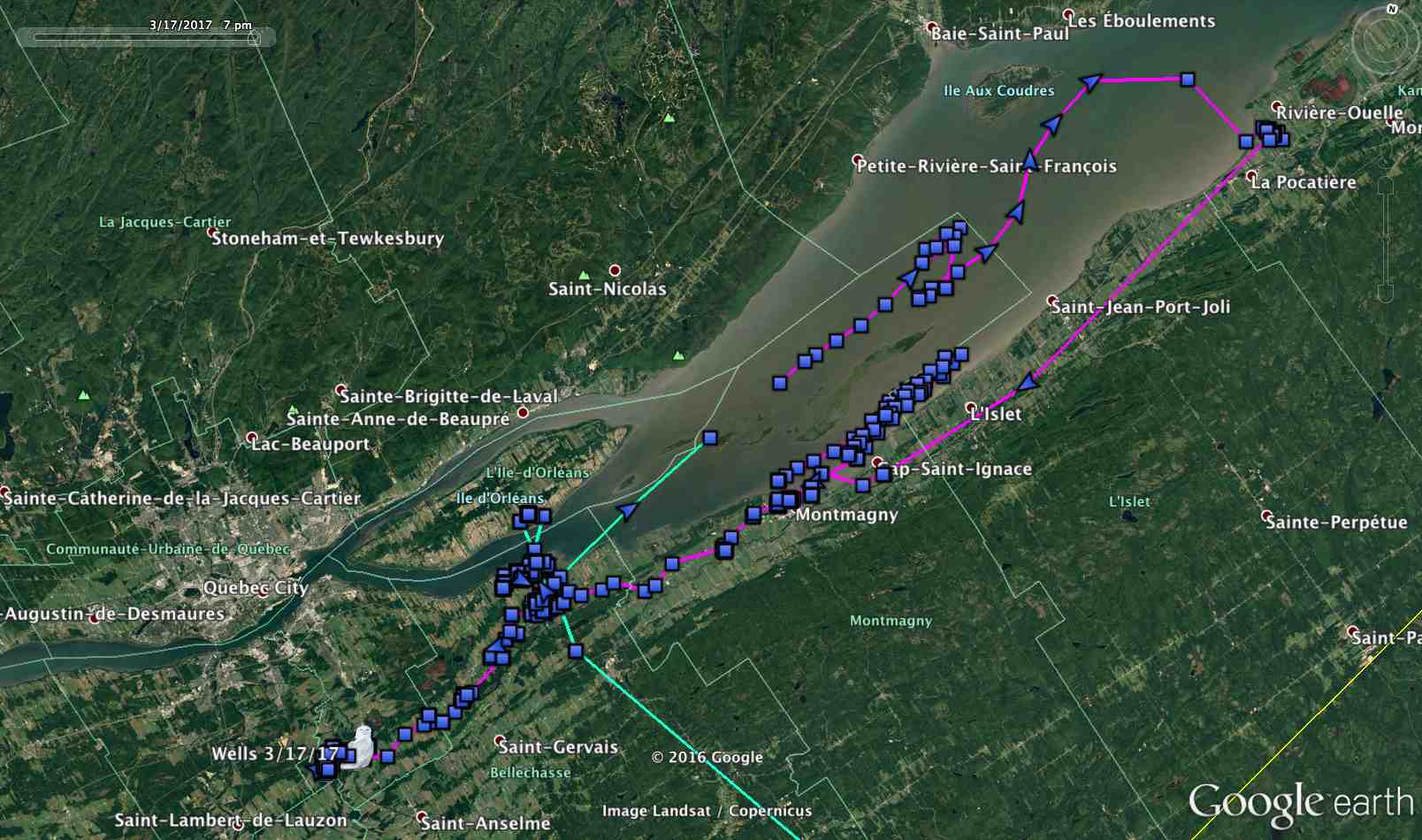 We expect to see some restlessness as the spring days get longer — even after a major snowstorm, which much of the Northeast this past week. And we saw some of that behavior this time, along with transmissions from a couple of AWOL owls. After skipping a week, Dakota came back online after some sunshine on the Canadian prairies, and … END_OF_DOCUMENT_TOKEN_TO_BE_REPLACED 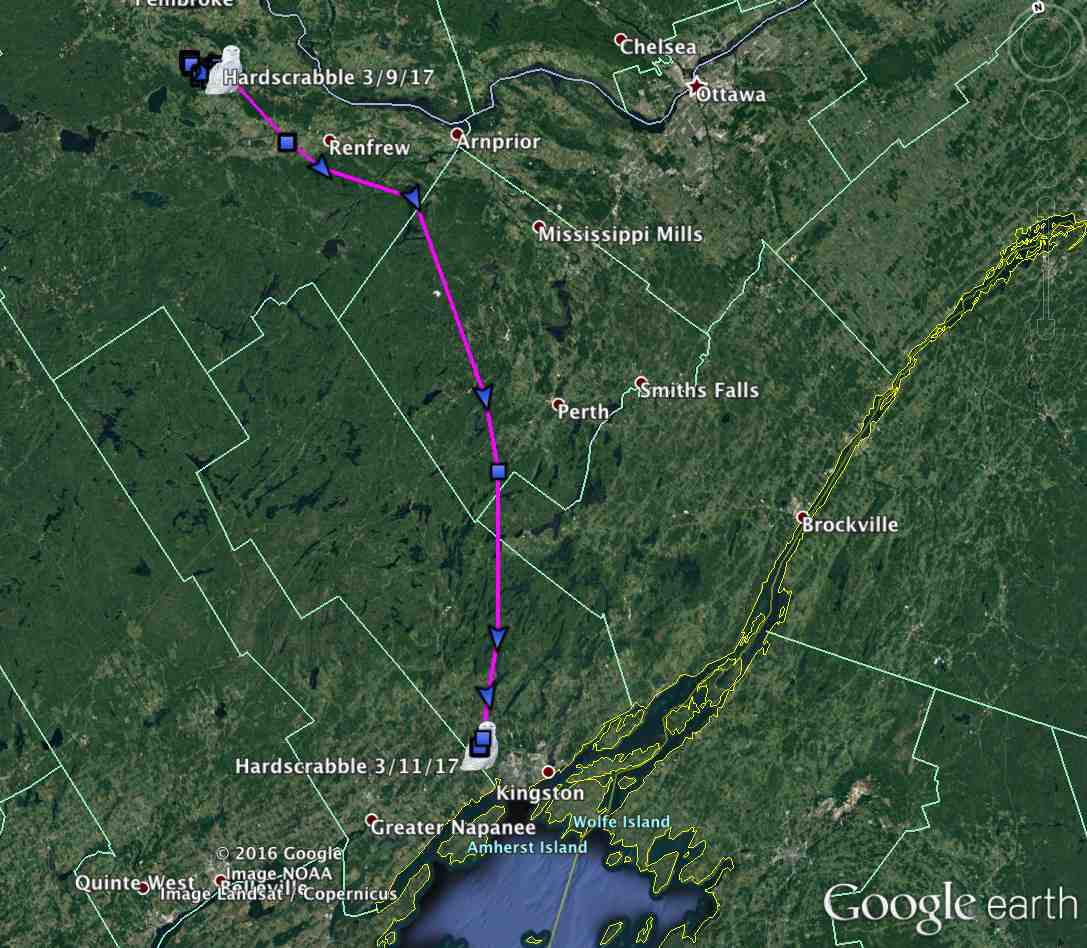 The past 10 days has been an interesting period, with some unexpected movements, some owls sticking close to their usual haunts, and a couple of absent snowies that may indicate that spring migration is really getting underway (or could just be low batteries). Favret, the adult female tagged in upstate New York by Tom McDonald, had initially moved north to … END_OF_DOCUMENT_TOKEN_TO_BE_REPLACED