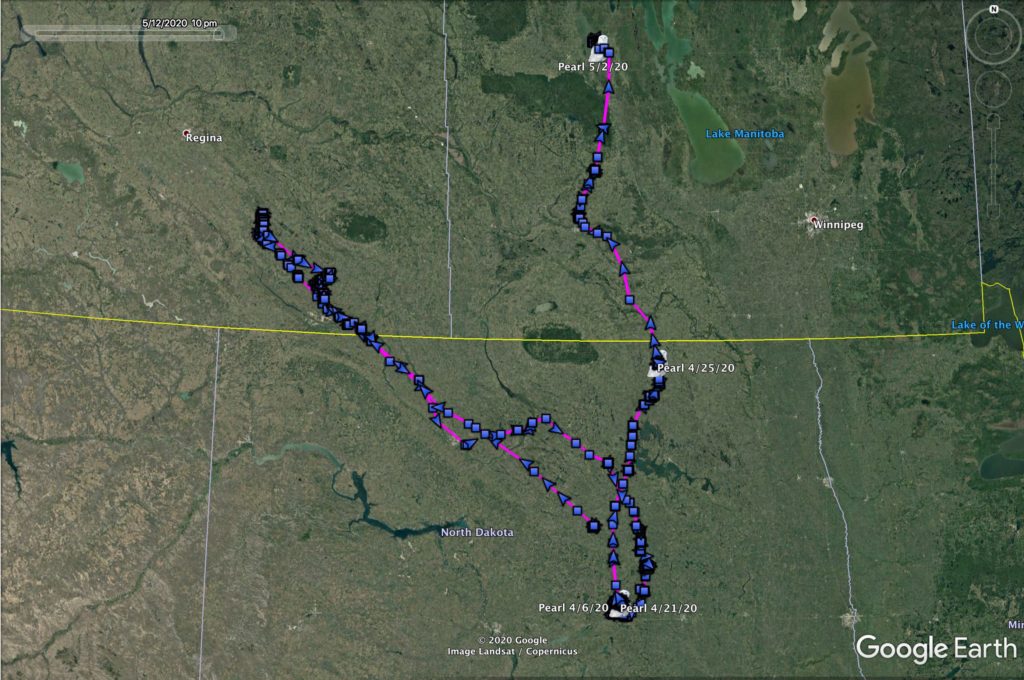 After spending the winter wandering around the Dakotas and Saskatchewan, Pearl is finally heading north. (©Project SNOWstorm and Google Earth)

It’s spring — although here in New England, where I live, and in other parts of the East, you’d have been hard-pressed to know recently, with accumulating snow last weekend as far south as the mid-Atlantic region.

Still, our tagged snowy owls realize the seasons are moving fast, and they have been as well. In the past couple of weeks, all of our tagged owls have moved north, and since the beginning of May we’ve only received data from three of them. 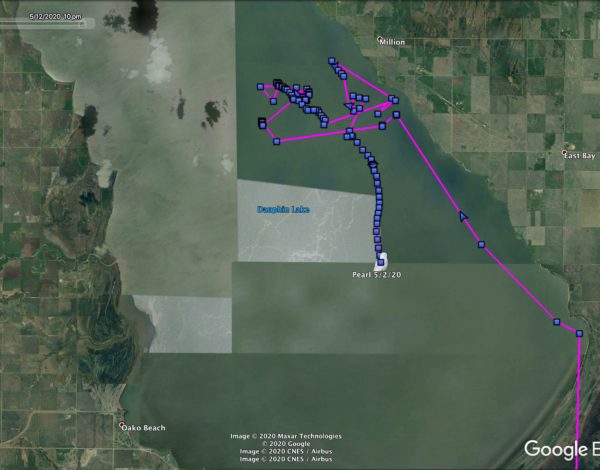 The classic signature of an owl riding on drifting ice — Pearl on Dauphin Lake, MB. (©Project SNOWstorm and Google Earth)

Out in the Great Plains, Pearl — who has been one of the more peripatetic owls this season — moved out of North Dakota the last week of April, and made what may be her final check-in of the season on May 2 from Dauphin Lake in southern Manitoba, about 230 km (140 miles) northwest of Winnipeg. She was apparently drifting on wind-pushed ice on the still-mostly frozen lake, since her tracks showed the classic pattern we see in ice-riding owls, a long series of very evenly distributed locations moving, in this case, at a very leisurely 0.5 kph (0.3 mph). 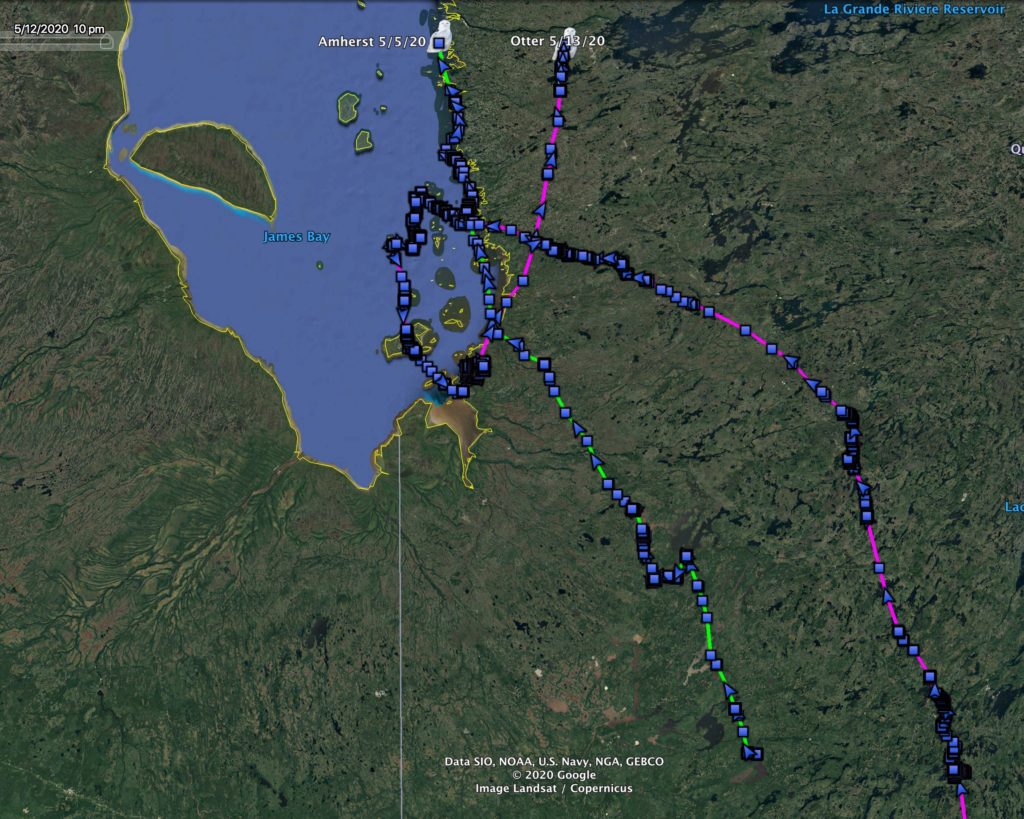 Amherst (green) and Otter (purple) are both moving up the east side of James Bay. (©Project SNOWstorm and Google Earth)

On May 5, Amherst — who was tagged on Amherst Island in Lake Ontario this winter, and who had been off the grid since April 9 — unexpectedly checked in from the east shore of James Bay, about 109 km (67 miles) south of Hudson Bay. She was about 20 km (14 miles) from Chisasibi, QC, a Cree-Inuit community of about 4,000 people on Le Grande River near the historic Hudson Bay Company fur-trading post of Ft. George, and the northernmost community with year-round road access in North America. 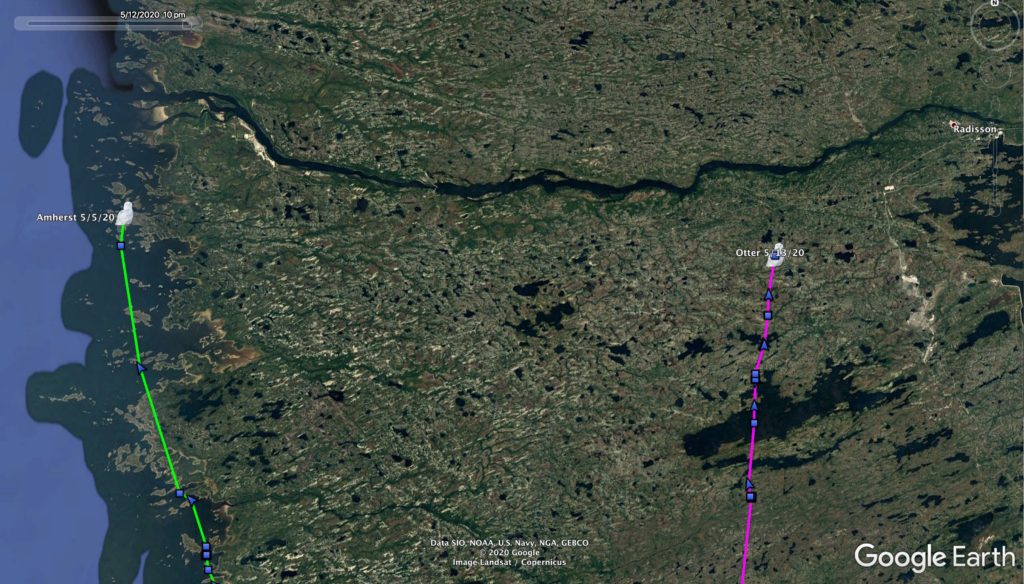 Amherst was just southwest of the Cree community of Chisasibi, while Otter was within cell range of Radisson, QC. (©Project SNOWstorm and Google Earth)

Today, May 13, Otter checked in via GSM cell connection, downloading nearly 3,000 GPS locations from the past six weeks. He was at about the same latitude as Amherst but 100 km (62 miles) to the east  near Radisson, QC, a base for workers at the massive hydroelectric generating station on Le Grande River. But Otter’s location was less of a surprise to us, because we’ve been getting weekly locations from him since March through the Argos satellite aspect of his hybrid transmitter. We knew he’d been loafing around southern James Bay since early April. Now, it appears, he is moving more purposefully north.

You’ll recall that Amherst and Coteau (out in the Dakotas) also are carrying hybrid transmitters, but in neither case have we had a transmission from them on the Argos side. This follows similar failures with Seneca last winter (whose Argos transmissions ended partway through the winter but whose GPS/GSM unit worked fine) and an adult female snowy that J.F. Therrien tagged last summer on Bylot Island in the Canadian Arctic, and who stopped transmitting via Argos within a few weeks.

We know snowies are tough on external antennas, which the Argos technology requires; last winter Seneca was photographed pulling and yanking repeatedly on his. (Our typical GPS/GSM units do not have external antennas.) The Argos hybrids have been used on other large raptors like eagles without an undue failure rate — it may be that snowies are just unusually hard on antennas. In the case of Otter, we were able to observe this past winter that most or all of his external antenna appeared to be lost — but there’s still enough of, well, something left that his unit has been able to send weekly packets of about 30 GPS locations via the Argos satellite system, as it’s supposed to — just enough to know with precision where he is at that moment. And, of course, when they’re in cell range, all of these hybrid transmitters have been working fine through the GSM cell network, like our regular transmitters. (Montreal, who carried a hybrid unit as well, was killed by a vehicle this winter, and the collision damage made it impossible to determine if she had damaged her antenna before the crash.)

While the hybrid units promised the chance to track our owls throughout the year, until the antenna issue is solved we’re going to hold off deploying any more, and stick with the standard cellular-based technology that’s proven so rugged and reliable.

4 Comments on “The Last Three”