Argus’ 22 months of travel, almost all of it beyond the reach of the cell network in Nunavut. (©Project SNOWstorm and Google Earth)

Sorry for the silence the past two weeks — as we’ve mentioned before (but it bears repeating), everyone involved in Project SNOWstorm does this on the side as a volunteer. Sometimes our day jobs get hectic enough that other things are delayed, and that’s been the case for me the past few weeks. Thanks for your patience. 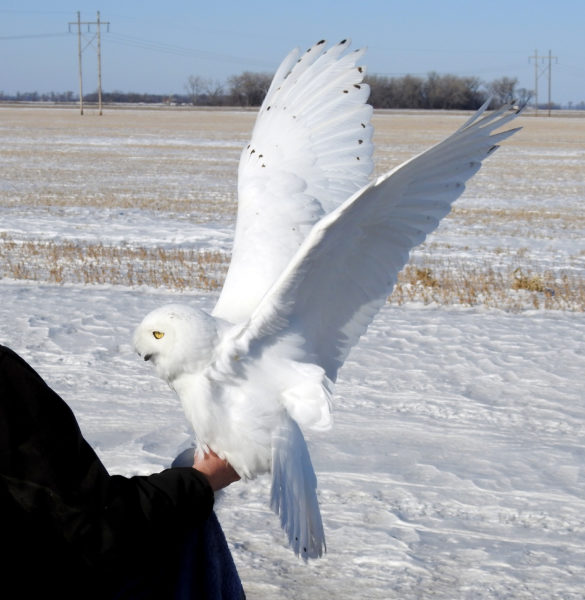 Argus flexes his wings just before his release in January 2019. (©Dan Mason)

But we’re leading off with some really exciting news — Argus is back, after an absence of almost two years! This almost pure white male was at least six years old when he was trapped and tagged in January 2019 by USGS biologist and longtime SNOWstorm collaborator Matt Solensky near Harwood, North Dakota. Argus spent the remainder of the winter mostly along the Red River valley between ND and Minnesota, and the last we heard from him he was northbound near the Manitoba border in April 2019.

After that…nothing. Because our GSM transmitters communicate with us through the cell network, if the owl remains out of cellular range, we won’t get data updates, even though the unit continues to log regular GPS fixes. So we didn’t know if Argus simply remained in the north, away from cell service; if he had perished; or if his transmitter had failed. 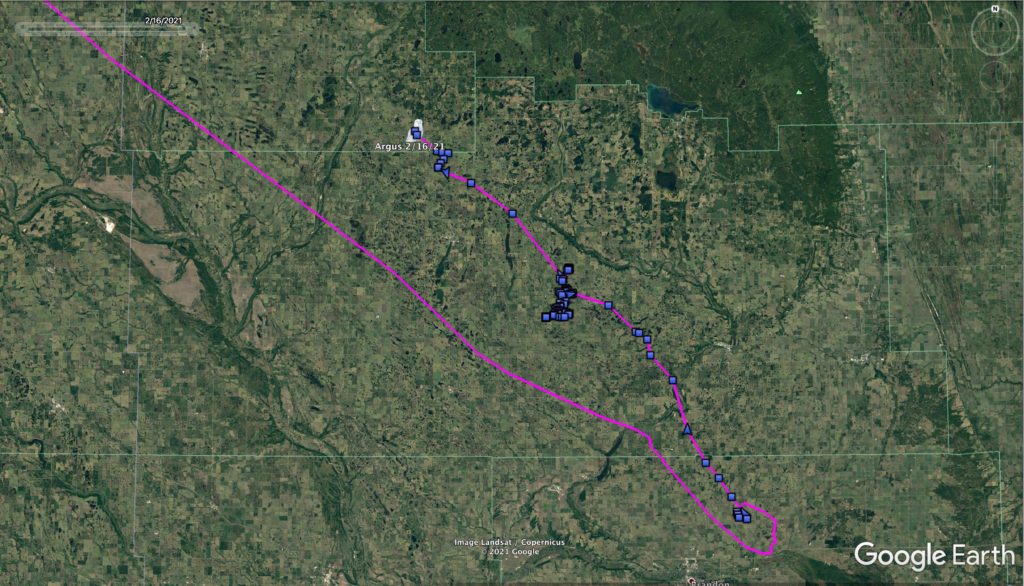 Argus swapped directions after moving into southwestern Manitoba earlier this month. The large block of darker green at the top is Riding Mountain National Park. (©Project SNOWstorm and Google Earth)

All that changed Feb. 7, when Argus’ transmitter unexpectedly checked in and downloaded more than 21,000 GPS locations, tracing all of his movements over the past 22 months. No wonder he was radio-silent; last winter he never came farther south than the Nunavut/Manitoba border near Nueltin Lake, and both of the past two summers he wandered the remote regions of the southern Canadian Arctic archipelago, from the Boothia and Adelaide peninsulas out to King William and Victoria islands.

Interestingly, despite his mature age there is no indication that he nested either summer — although he settled down into a few areas, his data do not show the intense concentration in one spot we’d expect from a male defending and provisioning a nest. We’ve seen at best spotty nesting evidence the past few years from other tagged owls in that region — it seems the lemming populations may not have been high enough to support widespread breeding.

When Argus checked in he was in Division 5 of southeastern Saskatchewan, just on the southern fringe of the boreal forest. Since then he moved southeast into southern Manitoba, then doubled back northwest, and as of Feb. 16 was just south of Riding Mountain National Park near Rossburn, MB.

With one exception, everyone else in our 2020-21 class of snowy owls is right where we left them last time. The exception, once again, is Stella, who moves and keeps moving.

Starting in the east, we’ve heard little from Wells since she connected — kind-sorta — in mid-January, with an almost empty battery and not enough juice to send us her current location. She’s connected twice since then, each time starting to send backlogged data from last April, but immediately crashing her battery after just a few GPS locations. We’re hoping the rapidly strengthening day length and solar angle of late winter will boost her power in the coming weeks, but her battery may have reached the end of its useful life. In all wildlife telemetry — radio VHF, satellite, GPS/GSM — it’s battery weight, power and life that remain the greatest constraints. Because of the extremes of temperature to which they are exposed, the batteries in snowy owl transmitters have an especially hard life.

In the St. Lawrence valley of southern Québec, Yul and Alderbrooke remain just 60 km (38 miles) apart — Yul near Baie-du-Febvre, and Alderbrooke near Saint-Hyacinthe. And in Ottawa, Dorval has been regular as clockwork, moving between the Central Experimental Farm and the former Greenbelt Research Farm (and occasionally roosting during the day on the roof of a big-box home improvement store in Nepean).

Simcoe’s spending a lot of her time on the ice, now that there is ice to spend time on. (©Project SNOWstorm and Google Earth)

Down on Lake Ontario, Simcoe has taken advantage of the recent cold weather to move increasingly off Amherst Island and out onto the growing area of shore ice that is belatedly forming on the lake. (This winter has seen unusually low total ice cover on the Great Lakes, at least until the recent epic cold snap.) We’ve mentioned many times in the past how much snowy owls love ice, whether it’s on lakes or the ocean, and while she’s still coming back to shore from time to time, Simcoe has been spending a lot of time drifting on ice floes.

Stella’s perambulations around the Dakotas have brought her to Lake Sakakawea in northwestern North Dakota. (©Project SNOWstorm and Google Earth)

Stella, chilling on the ice on Lake Sakakawea. (©Project SNOWstorm and Google Earth)

Jumping out to the Midwest, Columbia is snug as a bug in her winter territory southeast of Milford and Spirit Lake, Iowa. And farther west still, our rolling stone, Stella, just keeps on rolling. Since our last update, when she was in northwestern South Dakota, she’s moved 155 miles (250 km) north, and since Feb. 2 has been on the ice of Lake Sakakawea, one of the huge impoundments on the Missouri River (more specifically, she’s on the Van Hook Arm of the lake, near New Town, ND).

Lake Sakakawea is, at 368,000 acres (149,000 ha), the third-largest man-made reservoir in the U.S. Its completion in the 1950s flooded a sixth of the Fort Berthold Indian Reservation, including much of the best farmland, and evicted members of the Mandan, Hidatsa and Arikara Nation from the communities of Van Hook and Old Sanish; New Town is, as the name suggests, one of the resettlement sites. Stella, like most good snowy owls, has been taking advantage of the ice cover on the immense lake, staying as much as 3.5 miles (5.5 km) from shore.

A New Face (and the First Stirrings of Spring)
A Long, Long Way from a Mickey D

15 Comments on “The Return of Argus”