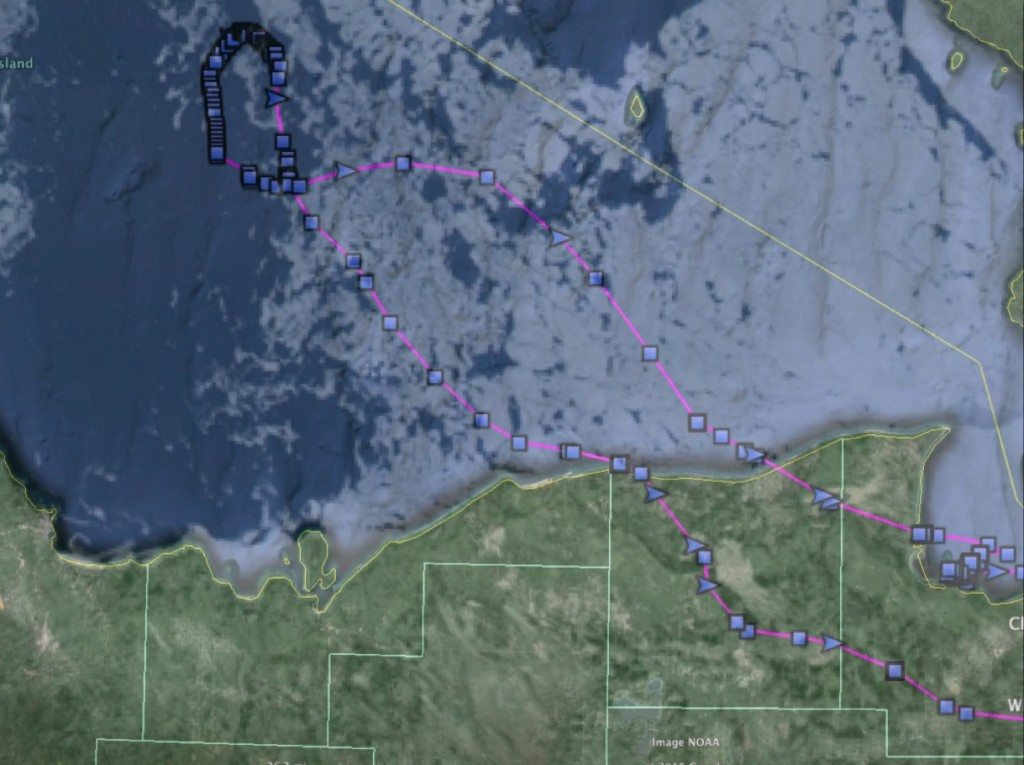 It may look and feel like spring in a lot of places, but on the Upper Peninsula of Michigan there’s more than a little bit of winter still hanging on.

The spruce woods are full of old, crusted snow drifts, while the portion of Lake Superior that wraps around Whitefish Point is still jammed with immense expanses of ice, thick enough to stop massive ore freighters until the Coast Guard icebreaker can cut them a path to the Sault Ste. Marie locks.

I’ve spent the past few days in Paradise, Michigan, at the base of Whitefish Point. I was here for the Whitefish Point Bird Observatory’s annual Spring Fling birding festival, a time to watch migrating waterfowl, raptors and early songbirds.

It was also a chance to spend some time with SNOWstorm team members Nova Mackentley and Chris Neri, who were running the nighttime owl-banding operation at WPBO, their colleagues Rich and Brenda Keith, Mike Bishop from Alma College, and fellow bander Allen Chartier, who got the whole ball rolling in Michigan this winter.

But little did I expect, when I accepted the invitation to speak at the festival more than a year ago, that my path here would be crossing those of several of our tagged snowy owls.

Even though the temperature was in the twenties each morning, spring is here and our owls are acting on those changes. This past week we’ve seen some fascinating movements by a couple of the tagged owls still in cell range, and we had a worrisome flash of deja vu from another snowy moving north.

Chippewa, the adult female that spent the winter on the eastern Upper Peninsula (only about an hour southeast of Paradise) seemed to go off the grid April 7, and we wondered if she’d flown north, or moved out onto the still-large area of ice on Lake Superior.

We got our answer on April 18, when she checked in almost exactly on the U.S./Canadian border on Izaak Walton Bay, at the western entrance to the Sault Ste. Marie shipping channel between lakes Superior and Huron. Her data from the previous 11 days showed that Chippewa had wandered 83 miles (139 km) out into Superior, traveling up to the edge of the eroding ice sheet that still covered the eastern end of the greatest of the Great Lakes.

Satellite images from NOAA show that she stopped at the fragmenting edge of the ice, where her tracks revealed how she rode drifting ice floes for about a day and a half — first drifting north and west, then almost due south once the winds shifted out of the north.

Once back on land, she cut across the base of Whitefish Point on April 11, lingering for several days on Whitefish and Waiska bays and just offshore from the airport at Sault Ste. Marie, Ontario.

By April 21 Chippewa had moved up to Batchawana Bay, Ontario. We got those data on April 25, by which point she’d moved back south to Sault Ste. Marie again, but for some reason didn’t transmit her full backlog of GPS locations, possibly because of a poor cell signal. 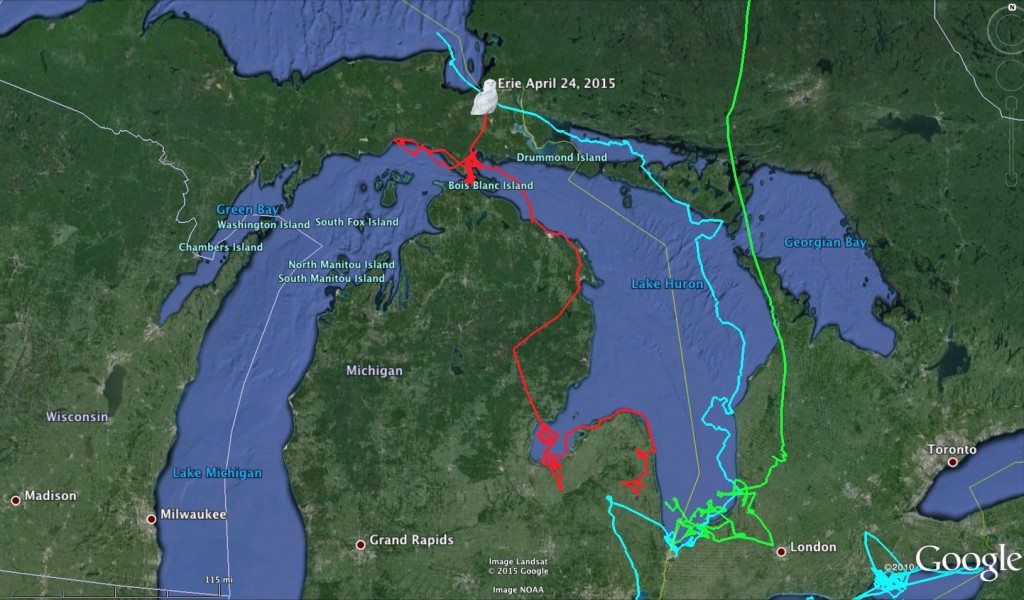 Erie, the adult male who had been hanging around Lake Huron near the Mackinaw Straits bridge, moved onto land as the ice broke down further, traveling west along the north shore of Lake Michigan to the area around Naubinway, Michigan, where there was still ice enough for him.

From there, he cut across the eastern U.P., and on April 24 — shortly after I landed on the on the U.P. myself — he was just north of Brimley, Michigan, very close to where Chippewa checked in. From what I could tell from the mapped data, the two owls were maybe a mile (1.8 km) from each other on the ice.

As of April 18, Millcreek remained near Cochrane, Ontario — and unless we’re very lucky, we’ll lose him for the summer when he leaves there, because there’s not much in the way of cell service north of that town. The fact that he missed his last check-in suggests he may well have done so already. 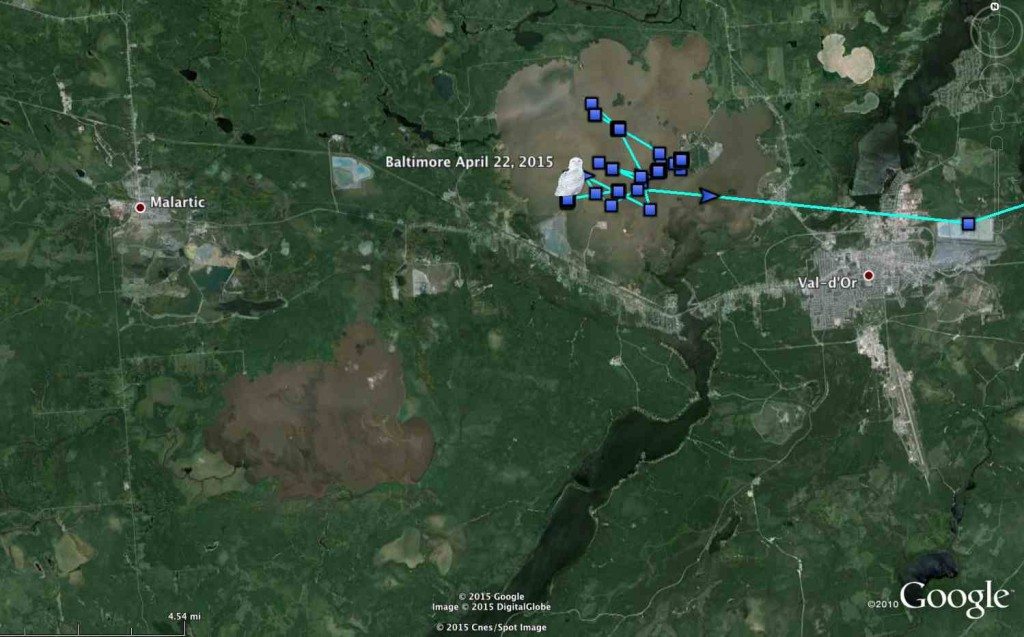 Baltimore, not far from a scary neighborhood. (©Project SNOWstorm and Google Earth)

But it was Baltimore that brought on an unsettling sense of deja vu. Between April 15 and the 21st, he migrated 321 miles (517 km) from near Perth, Ontario, more or less due north into western Quebec. By April 18 he was resting on Lac Matchi-Manitou (still fully frozen over), then abruptly changed direction and flew west 66 km (41 miles) to Val-d’Or, Quebec, where he was sitting on Lac De Montigny on April 21. 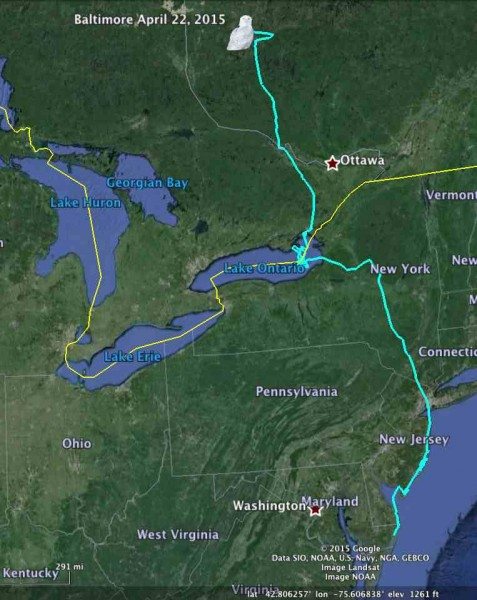 I’ll admit my heart sank a bit when I realized where he was. Just 16 km (10 miles) west of Val-d’Or lies the town of Malartic — and those who were reading this blog last year will remember that name.

In June of last year, an immature male snowy nicknamed Oswegatchie — who had lingered farther south than any of our owls — showed up at Malartic, presumably drawn by the open spaces of Canada’s largest open-pit gold mine. There are a lot of ways an owl can get in trouble at an operation like that — blasting, lots of big vehicles, electrical wires and chemical toxins among them.

And sadly, Oswegatchie didn’t make it out. After several weeks his signal disappeared, leading us to believe he’d left. Instead in late July his transmitter suddenly sent more than a thousand locations in the same spot, and mine personnel (to whom we were grateful for their quick response to our calls) recovered his feathers-and-bones remains. A necropsy was unable to determine a cause of death.

Now, Baltimore was only a short distance away, and it felt like a bad rerun. We’ll have to see what happens. Chances are that Baltimore, who has been showing a really strong urge to fly north, will just keep doing so.

In fact, he may already have moved on, since he missed a check-in on the 25th. Like Millcreek, he was at the extreme northern edge of the main cell network, and flying even a few kilometers north of Val-d’Or would probably take him beyond range.

Of course, we thought that last year with Oswegatchie, too. All we can do is hold our breath and cross our fingers, and trust to Baltimore’s northbound instinct to move him out of the neighborhood.

2 Comments on “The View from Paradise”