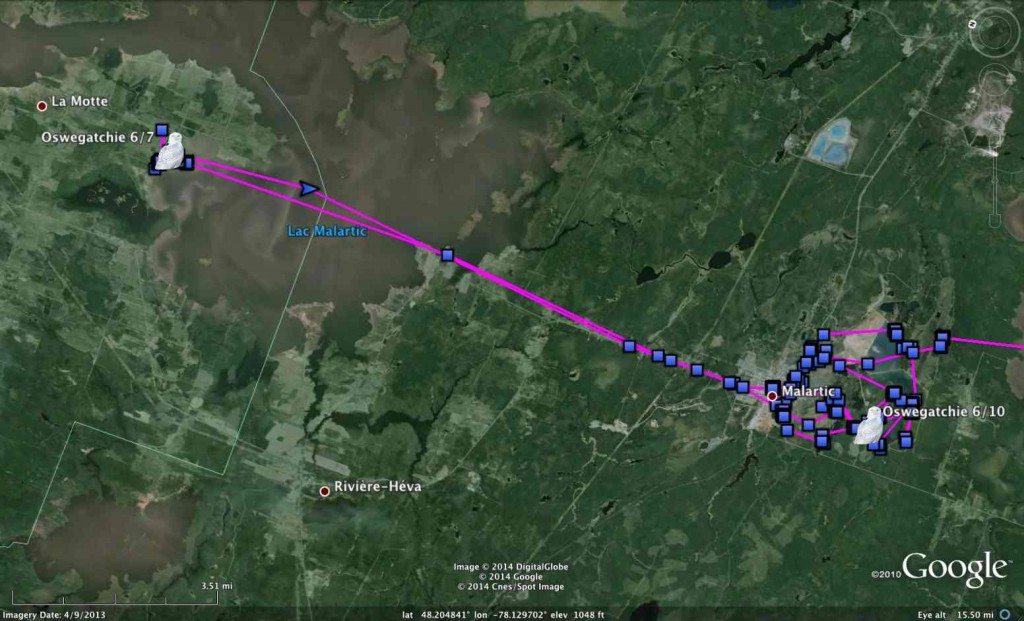 Oswegatchie’s movements from Malartic to Lac Malartic and back. (©Project SNOWstorm and Google Earth)

Oswegatchie has been the gift that keeps on giving — and the owl that keeps coming back.

Every time we think we’re about to see the last of him, he reverses course to stay within cell range, or finds the only cell tower for miles. And he did it again this week.

On Friday night he was on Lac Malartic in western Quebec, with literally just one or two remaining GSM cell towers between him and the Arctic. I figured he’d be gone, but Monday evening he checked in, having flown about 18 km (12 miles) back south from the lake to the town of Malartic, where he’d previously spent some time June 3-7.

While I’ve done some fishing well to the east of that area, I’m not familiar with Malartic, and wondered at the enormous industrial earth-moving that Google Earth was showing. A quick online search revealed the answer — it’s what will be the largest open-pit gold mine in Canada, consuming the southern part of the town and already necessitating the removal of hundreds of homes.

In fact, toggling between the “standard” Google Earth image, taken in April of last year, and the historical imagery tool — which was a photo taken, ironically, a few months later, but somewhat obscured by clouds — I could see how rapidly the mine was taking shape. The pit itself will eventually be 380 m deep — deep enough to swallow the Eiffel Tower.

(There’s a Globe and Mail story on the mine here, including the interesting fact that the mining company started work a year before it had the proper authorization. Some things never change.) 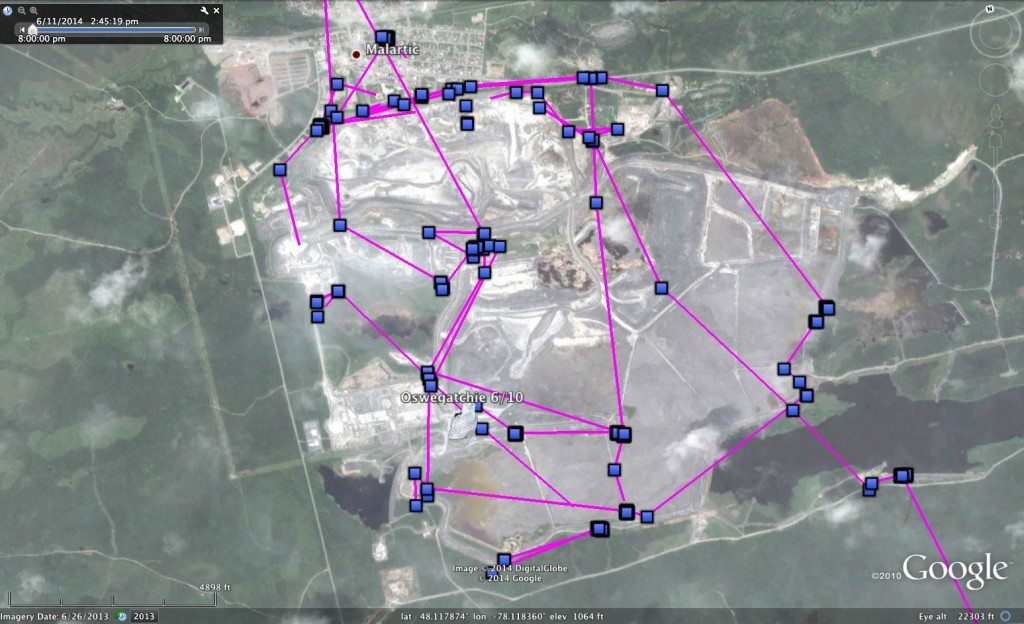 Looking at the June 2013 satellite images of the emerging mine (above), Oswegatchie’s movements also made a little more sense. He was hunting along the “green wall,” a huge grassy berm that now separates the mine from the town, as well as some of the active mining and tailings areas. It must be incredibly noisy, and the fact that they’re regularly blasting has me a bit worried — it would be awful if, after all this time, he wound up sitting in the wrong place at the wrong time, and boom.

But while he was in the pit itself a few times June 4, mostly he seems to be staying to the margins of the operation. We know that noise and commotion don’t bother snowy owls — look at their fondness for big airports — and in the densely wooded boreal forest zone of Quebec, the open horizons of the mine, if not the ambiance, must be attractive.

Waiting (again) for Oswegatchie
Oswegatchie, Back on the Board

2 Comments on “There and Back Again”