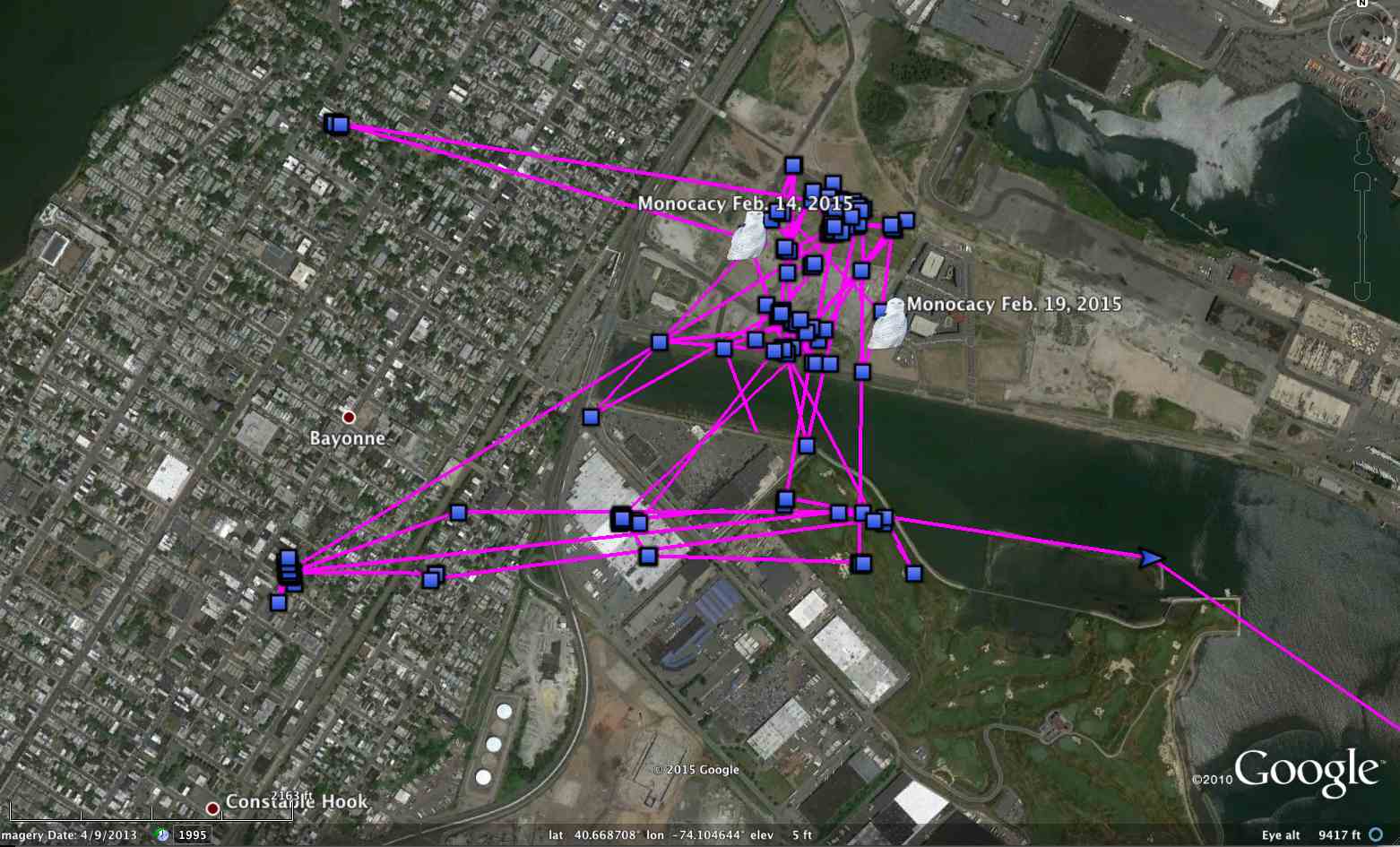 Monocacy’s loving Bayonne – and the folks in the apartments on Goldsborough Drive should keep an eye on their rooftop for a giant white owl. (©Project SNOWstorm and Google Earth)

Thursday night was a busy one around here — four of our newest cohort of owls checked in, as well as two of last winter’s returnees.

Let’s start with the veterans. Millcreek is still chilling in Toronto, and leading a decidedly terrestrial existence this winter, compared with his floe-riding and ice-wandering on Lake Erie last year. And to our continuing relief, he remains close to but studiously avoids Toronto Pearson airport.

Monocacy, on the other hand, really had us worried when she checked in on Valentine’s Day, having moved west across Long Island to within a couple miles of Newark International Airport.

But as of Wednesday morning, she was still hanging out on the Hudson River waterfront in Bayonne, N.J. Jeff Kolodzinski, with the Port Authority (which runs Newark, JFK and several other New York City area airports) told us that snowies have been almost absent from Newark this winter — perhaps because the airport now uses taxiway edge markers (instead of the normal taxiway lights) with special anti-perch caps to deter birds from using them, a collaborative project with the Raptor Trust in New Jersey.

Up in the Upper Peninsula of Michigan, Chippewa continues to prove that there’s no place like home. She’s still using the same half-mile-square area near Pickford, and really, really, really loves the northern corner of one of the local barns — which is exactly where she was sitting when her transmitter called in.

In southern Michigan, Prairie Ronde has shifted about three miles (4.8 km) south from where she was released, into an area with sweeping, wide-open ag fields. No indication that she’s interested in homing back to the Saginaw airport where she was trapped, fortunately. 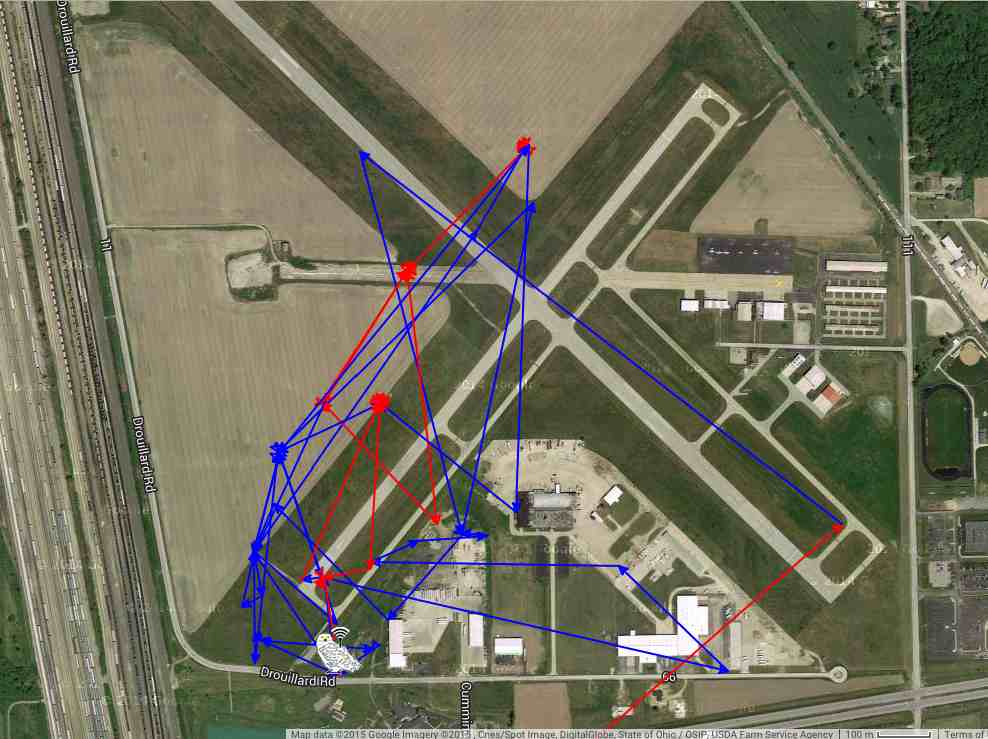 Why we try to keep snowy owls away from airports — Buckeye made 15 separate runway crossings, each one a potential collision risk. (©Project SNOWstorm and Google Earth)

Speaking of airports and owls, the good news about Buckeye is that she has remained in Ohio and shown no further inclination to head back to Detroit, where she was trapped. The bad news is, she’s found a different airport — albeit a much smaller and therefore presumably less dangerous one than Detroit Metro. It’s the Toledo Executive Airport near Moline, OH, which handles charter and general aviation.

Why airports? If you take a look at Buckeye’s tracking map, you can’t help but notice all the wide, expansive farm fields for miles in every direction. But airports — especially airport runways — give snowy owls the absolutely flat, completely open sightlines that they seem to instinctively crave — no fencerows, farm buildings or other visual clutter. The main runway, even at a smaller airport like Toledo Executive, is more than a mile of utterly flat, empty land — except for all those big, loud (dangerous) birds coming and going.

The last of the new owls that checked in last night was Baltimore — and he certainly was the most interesting. You’ll recall that this adult male, originally banded last winter at the Martin State Airport outside Baltimore, was retrapped there last week and moved to Assateague Island on Atlantic Coast. 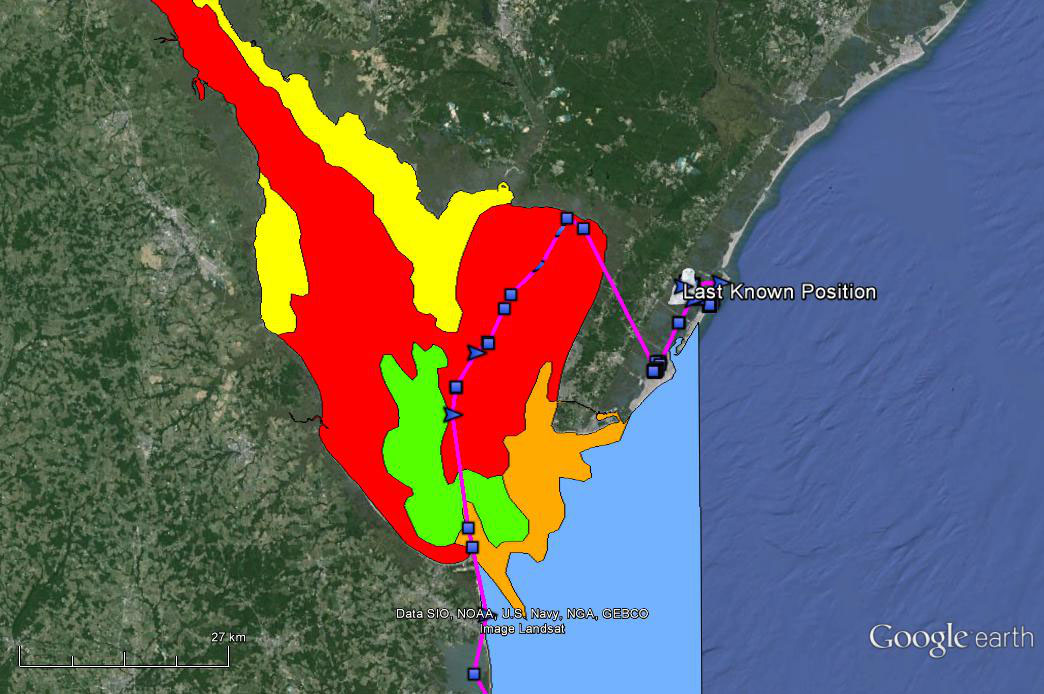 Baltimore made a long over-water crossing of the Delaware Bay — but couldn’t have gotten wet if he tried. In this graphic, red indicates at least 90 percent ice cover. (©Project SNOWstorm and the U.S. National Ice Center)

Well, he made a trip that several previously tagged snowies made last year — up the coast to Cape Henlopen, out across Delaware Bay, and into south Jersey. The difference is, he was able to do it across an almost solidly frozen bay, as this graphic from the U.S. National Ice Center shows.

As of Thursday evening, he was in Great Sound, between Stone Harbor and Avalon — precisely where Henlopen, one of our 2014 owls, spent the latter part of the winter.

The irony is that we’ve tried multiple times to trap snowy owls this winter on the New Jersey coast, without success — but we now have two Jersey birds, Monocacy up in blue-collar Bayonne, and Baltimore “down the shore,” as we say in the mid-Atlantic.

As always, you can explore the movements of all of these owls by using our interactive maps — and special shout-out to Don Crockett, who created these incredible maps for us last winter and continues to improve them.

Great perk for sharing our campaign with your friends
Buckeye

One Comment on “There’s a Whole Lot Going On”