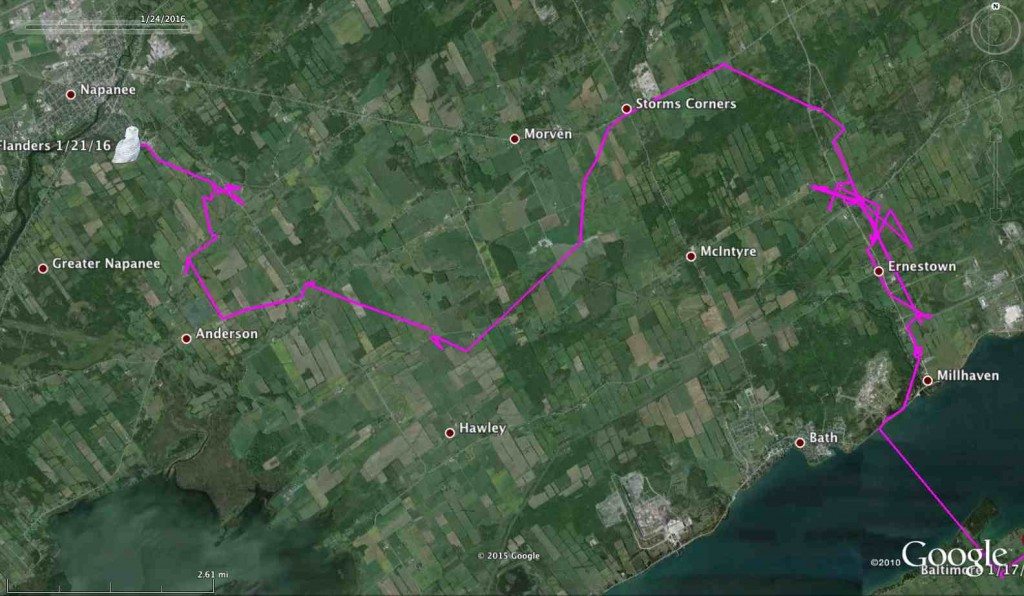 On the move after a month on Amherst Island, Flanders meandered to Napanee, Ontario, in the past week. (©Project SNOWstorm and Google Earth)

Most winters, Amherst Island is one of the best places to find snowy owls, and that’s certainly the case this year — especially if you’re looking for a snowy owl with a Project SNOWstorm transmitter.

Two of our owls, Flanders and Baltimore, have been on Amherst for the past month or so. And although Flanders moved off the island last week, another of our 2015 tagged birds, Chaumont, has moved in. Maybe they thought three was a crowd.

Meanwhile, on the New England coast we have one owl sitting tight, one owl on the move, and one who didn’t phone home this week. More about them in a moment.

Flanders has been on Amherst since mid-December. But on Jan. 14 she must have gotten a case of wanderlust, because she flew up to the northeastern end of the island, and the next evening she crossed the channel to the mainland. Ever since she has been slowly meandering north and west.

When she checked in Thursday evening, Flanders was sitting on a telephone pole in a housing development cul-de-sac just outside Napanee, Ontario — heaven help the suburban cottontails. As the crow flies, she’d moved about 22.5 km (14 miles) northwest from Amherst, and had spent the intervening week in an area with lots of flat, wide-open farm fields — attractive habitat for a snowy, and probably one that provides a lot of voles and other prey.

Baltimore remains on Amherst, and has now sent us almost all of his backlogged data from the subarctic. He did give us a real scare, however. Wednesday evening his transmitter checked in, on schedule, sending us almost 4,100 GPS locations from his autumn movements — and also a lat/long for his current location, which I logged into Google Earth as I always do.

To my surprise, the next morning he checked in again, sending just a few dozen points. Odd, I thought — and when I plugged in his lat/long, I was shocked to find it was precisely the same spot where he’d been the evening before, along a road just outside the village of Stella.

Alarm bells started going off in my head — the chance that he’d be in exactly the same spot 12 hours apart was pretty slim. Had he been hit by a car, and had the collision caused the weird, truncated transmission?

Fortunately, I’d been in email contact with Judy Bierma, who lives in Stella and had been following our reports closely. Although she was in Toronto that day, Judy immediately phoned Janet Scott, the well-known Bird Lady of Amherst Island.

It took no time at all for Janet to call me back, from the site, to report that a thorough search had revealed no sign of trouble. We had by then determined that the transmitter had just thrown a duplicate transmission — and while it was (thankfully) a false alarm, we’re deeply grateful for Judy and Janet’s rapid-fire assistance. What’s more, Janet emailed later to say she’d seen a very white snowy, presumably Baltimore, perched on the radio station tower not far from where she’d been looking.

(In fact, I just had a nice chat with Janet and the folks at CJAI 92.1 FM on Amherst Island this morning — Baltimore’s been perching a lot on the silo by the barn where “Canada’s Smallest Radio Station” is housed!) 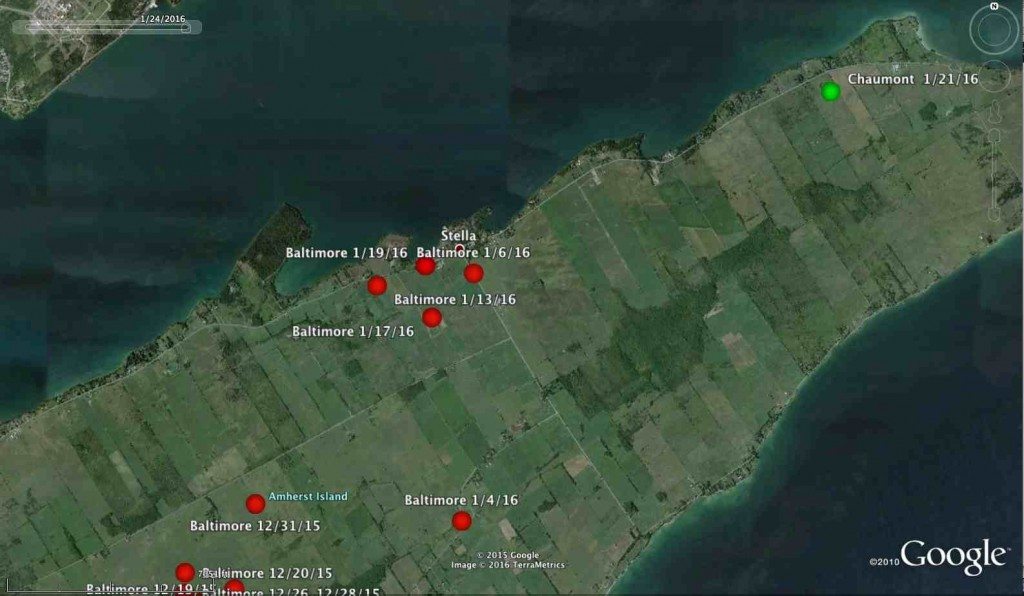 Baltimore and Chaumont — both tagged last winter (in Maryland and New York, respectively) are sharing the neighborhood on Amherst. (©Project SNOWstorm and Google Earth)

We knew last week that Chaumont had moved back into cell range, but we weren’t sure where, other than it was somewhere in Canada. This week, as his transmitter gained some voltage, he started downloading stored data — along with his current location, which was on the northeast corner of Amherst Island, very close to where Baltimore’s been hanging out.

When it checked in, Chaumont’s transmitter also took up the new firmware configuration CTT has developed for the older, second-generation transmitters like his, which allows for significant energy savings. So we’re expecting a big battery boost and a quicker download of his remaining data, which stretches back to late February. The same firmware change in Baltimore’s transmitter made a huge difference.

On the New England coast Wampum, who was on Penikese Island in Massachusetts Jan. 14, didn’t check in this week; she may have been out of cell range way out in the Elizabeth Islands. 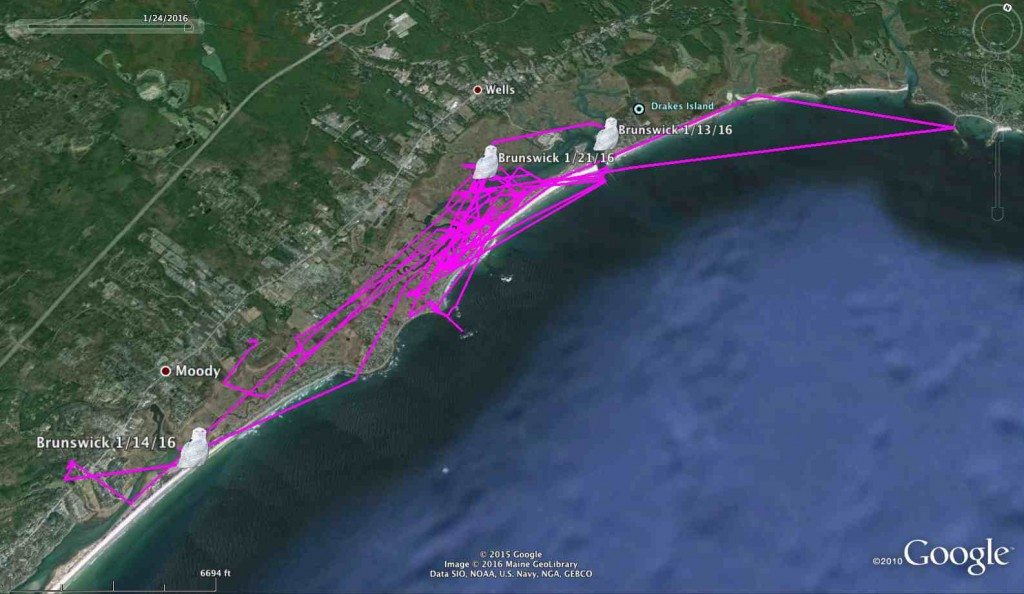 Brunswick has been the definition of a good owl — staying neatly within the bounds of Rachel Carson NWR, and not showing any inclination to go back to the airport where she was caught. (©Project SNOWstorm and Google Earth)

Up in Maine, Brunswick has remained almost entirely within the bounds of one of the larger units of Rachel Carson National Wildlife Refuge. She’s moved as far north as Lords Point near Kennebunkport, but then flew back down the coast again and was staying in the tidal marshes near Wells, close to where she was released Jan. 12. We’re pleased that she’s shown no inclination to go back to the Brunswick Executive Airport, where she was initially trapped.

I wish we could say the same about Salisbury, a Logan Airport transplant that Norman Smith moved up the coast to Salisbury Beach State Reservation on Jan. 17. After a few days hanging around the Salisbury Beach/Parker River NWR area, Salisbury began moving purposefully south late in the afternoon on Jan. 20. 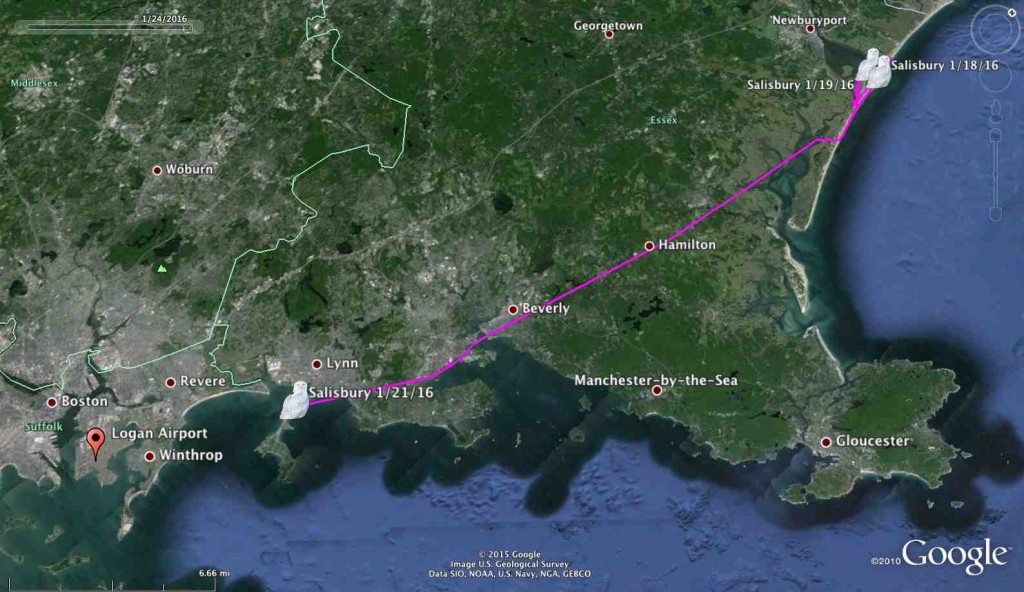 After making a beeline south, Salisbury is only about five miles from Logan Airport — a worrisome development. (©Project SNOWstorm and Google Earth)

Over the next few hours he cut across the base of the Cape Ann peninsula, through Ipswich, Hamilton and Beverly. At midnight he rested on a huge oil tank along the waterfront in Salem, and lingered around there through the following day. At dusk on the 21st, though, Salisbury picked up and was heading south again — and when he transmitted his week’s worth of stored data at dusk that evening, he was on the causeway leading to Nahant Island, only 5.5 miles (8.8 km) northeast of Logan.

With luck, he’ll stay at Nahant, or wind up on one of the smaller islands in Boston Harbor. But this owl’s been picked up twice before at Logan, and the airport is magnet for snowies in the Boston area. We’ll have to bide our time, wait for his next transmission — and keep our fingers crossed.