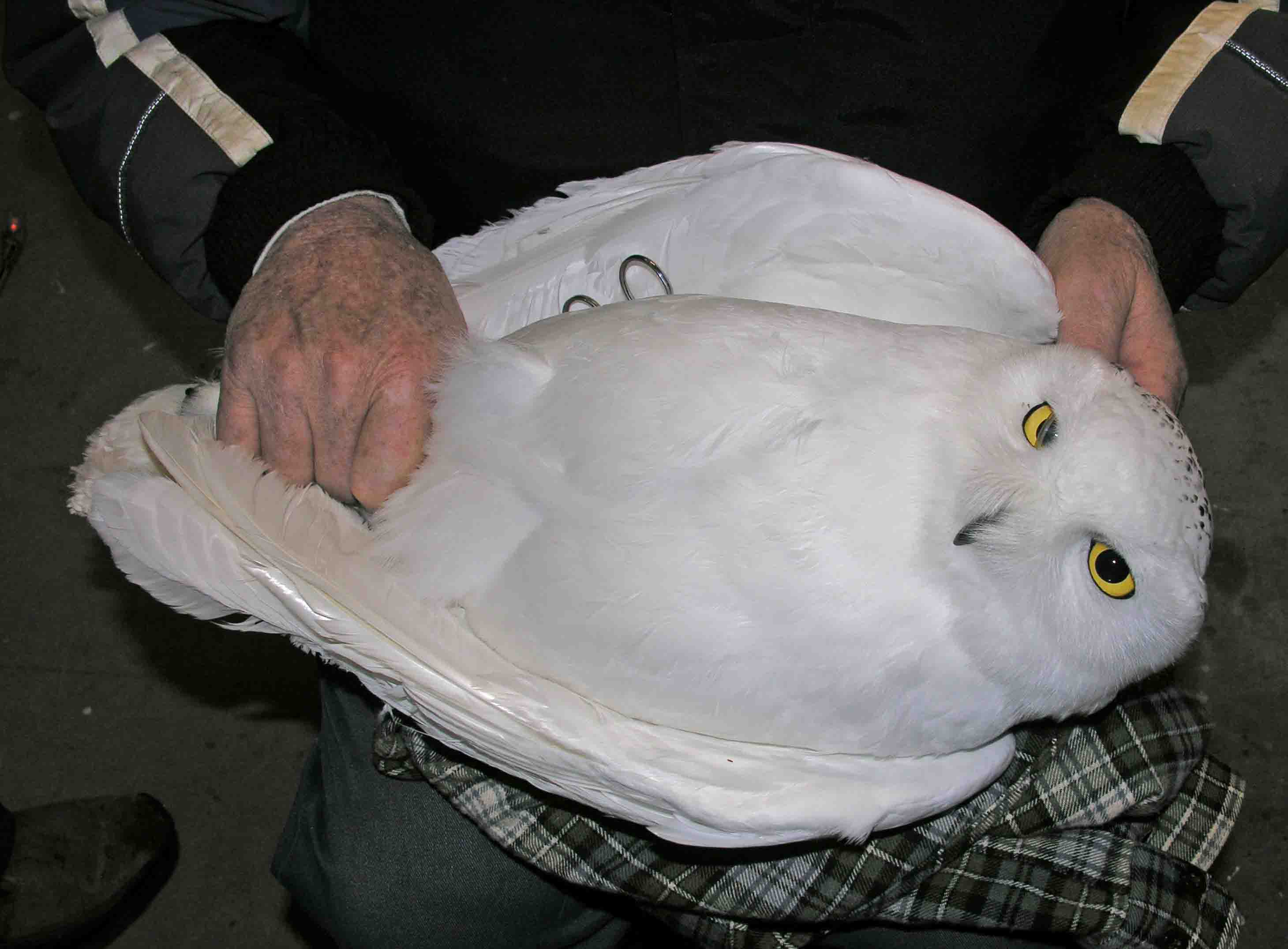 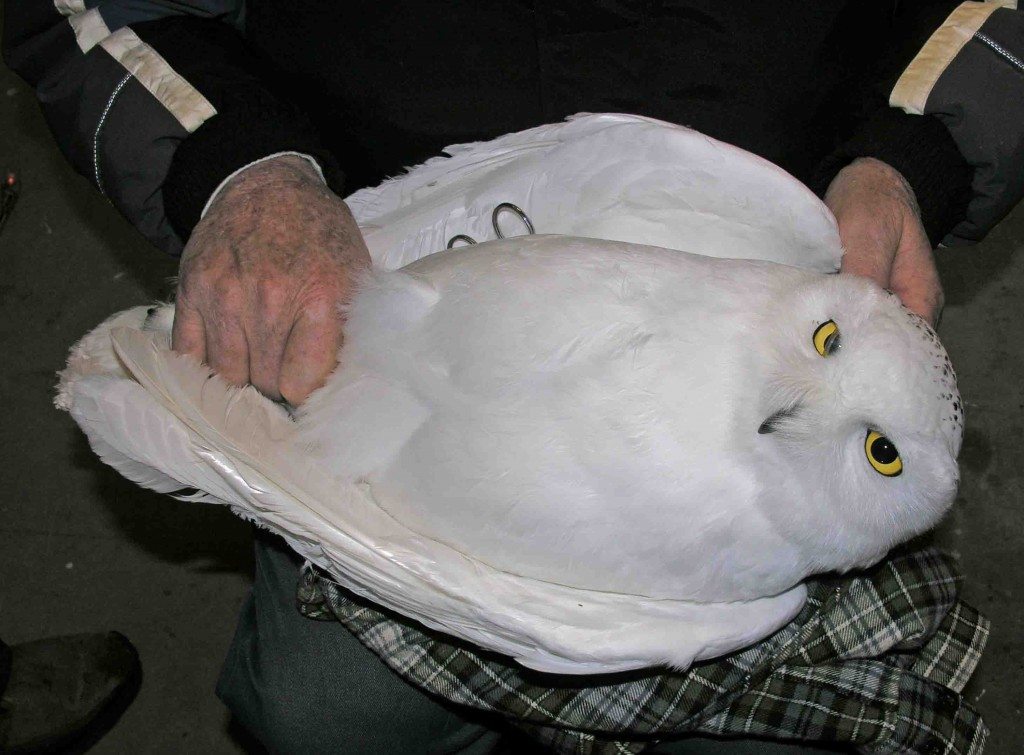 Cradled in Bob Gallagher’s lap, Tibbetts sits patiently through the tagging process. The object peeking out under his wing is a hemostat, which clamps the Teflon ribbon harness while it’s being fitted. The harness is hidden under Tibbett’s dense, nearly immaculate plumage. (©Tom McDonald)

Tom McDonald just got back from a long, hard trapping trip to upstate New York, which he said was “nothing short of grueling. The weather conditions were perfect but the God of trapping luck was not with me…until Tibbetts stepped into the bow trap.”

Not that getting this adult male snowy was easy. Tom spent six hours over the course of two days trying to catch him, and was finally successful only after dark, with the light of a three-quarters moon to help him.

Tibbetts was caught near Cape Vincent, New York, where the St. Lawrence River leaves Lake Ontario — the same area where Tom tagged Chaumont (currently on Amherst Island) last winter, and very close to where he tagged Flanders (currently near Napanee, Ontario) this season. 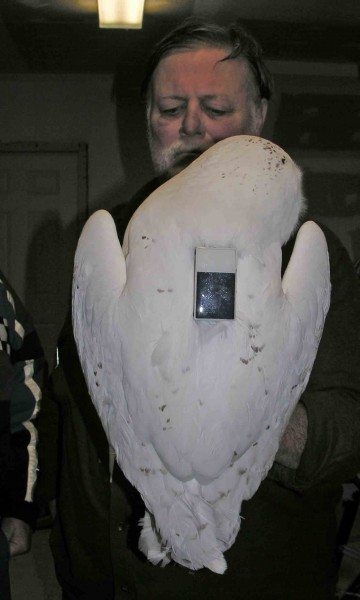 Ready to go; Bob Gallagher, whose home serves as a snowy owl base of operations, holds the newly tagged owl and his solar-powered transmitter. (©Tom McDonald)

Named for nearby Tibbetts Point, which juts out into the lake, the owl tipped the scales at a healthy 1,687 grams (3.8 pounds). That’s almost exactly the average weight for a healthy adult male snowy, based on data Tom’s collected over more than 25 years of banding hundreds of snowies.

Tom did the tagging at his friend Bob Gallagher’s house, which serves as a base of operations when he’s working in the Chaumont Bay area, and Tibbetts was quickly released with a band and a new transmitter.

In the days since his tagging, Tibbetts roamed around Point Peninsula and Pillar Point, as well as hanging out on Chaumont and Guffin bays, which are now frozen over. His latest location Sunday night was close to the town of Chaumont, on Point Salubrious — with a name like that, why wouldn’t he want to linger there?

We’ll be curious to see how much wandering Tibbetts does. That part of Lake Ontario and the St. Lawrence, with its archipelago of islands, points and peninsulas, is about as ideal for snowy owls as any place south of the Arctic, and the islands make easy stepping stones for an ambling owl. Flanders, for instance, moved from the Cape Vincent area to Wolfe Island, then to neighboring Amherst Island, then to Prince Edward Point, back to Amherst, and now up on the mainland.

High vole populations on Amherst Island, which is about 25 miles (41.5 km) away from where Tibbetts was caught, have attracted up to 20 snowies this winter, along with unusually high numbers of rough-legged hawks and harriers. As the bays and coves in this part of Lake Ontario start to freeze up, waterfowl may become a little harder to catch, making rodents an even more attractive dining option for the region’s wintering snowies. 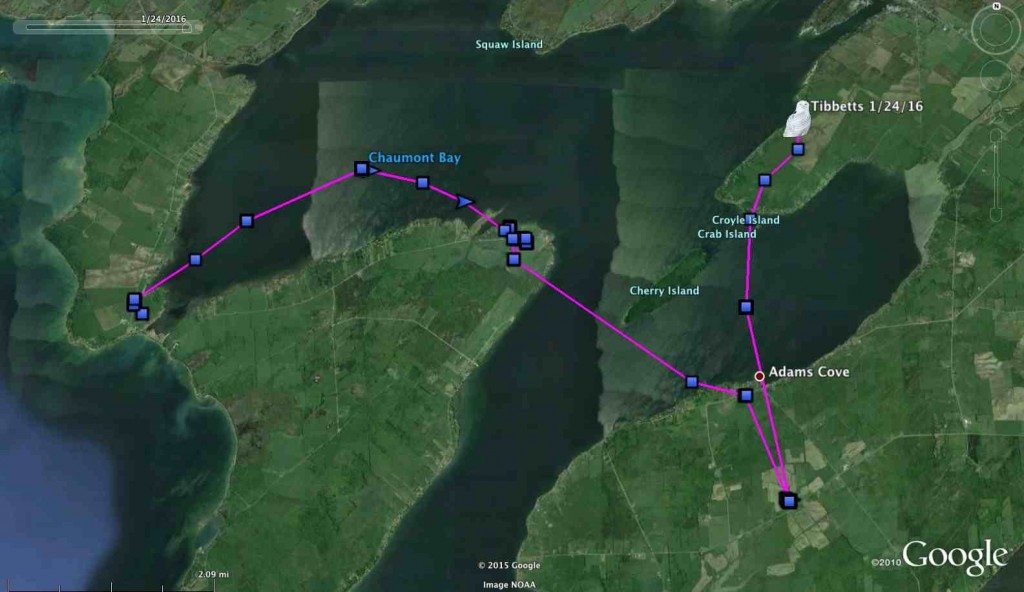 Since his release, Tibbetts has been moving around the islands, bays and peninsulas where the St. Lawrence River and Lake Ontario meet. (©Project SNOWstorm and Google Earth)

2 Comments on “Tibbetts Joins the Crew”