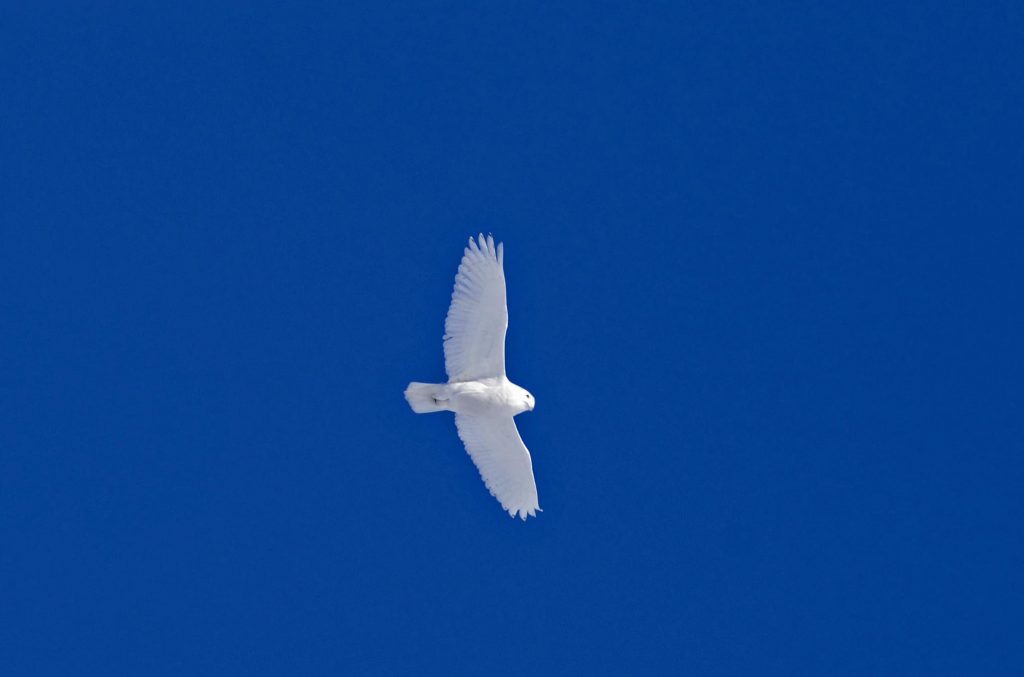 Like parents, we try not to pick favorites — but over the years, Baltimore has become first among equals in the 45 snowy owls we’ve tagged.

Banded in 2014 and given a transmitter in 2015, we’ve tracked Baltimore north and back over several years, generating the most detailed movement record for any snowy owl, anywhere. So we were thrilled on Dec. 25 when Baltimore checked in again this winter in southern Ontario.

As is usually the case, his battery was depleted from having stayed north in the dark subarctic winter. But even with the dim winter sun, his voltage was creeping up, and we were getting chunk after chunk of his backlogged data, just as we did last winter.

But on Jan. 1, something odd happened — not just to Baltimore’s transmitter, but to Dakota’s and Hardscrabble’s, too. The units jumped over all their backlogged data, and started sending up only the latest, current GPS fixes.

Our colleagues at CTT, which make the devices, were puzzled. In the case of Dakota and Hardscrabble, which have third-generation units with expanded capabilities, CTT was able to communicate with the transmitters and confirm that the old data were still there, and they felt confident that with sufficient voltage they could recover it all. But Baltimore had an older version, so they crafted a software patch, tested it thoroughly in the lab, and then pushed it through to Baltimore’s transmitter on Jan. 11. His unit took up the new program, basically said “OK” to CTT’s servers — and then went completely dark. 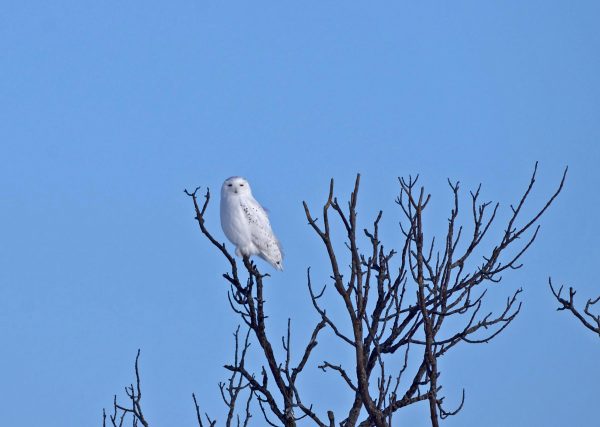 Sitting in one of his favorite trees west of Ottawa, Baltimore keeps a wary eye on the trapping team. (©Dan and Patricia Lafortune)

We don’t know what happened, but as the days dragged on and it became increasingly clear that the issue wasn’t a bad cell connection or poor battery, we began to look at other options for recovering or replacing his transmitter.

We were very lucky, though, that Baltimore wasn’t too far from our good SNOWstorm friends Dan and Patricia Lafortune. They have helped out many times over the years, keeping an eye on birds like Oswegatchie in 2014, and Baltimore last winter when he was in southern Ontario. They had already been keeping regular tabs on Baltimore this winter, so they focused on keeping track of him visually in case we would be able to try to retrap him. 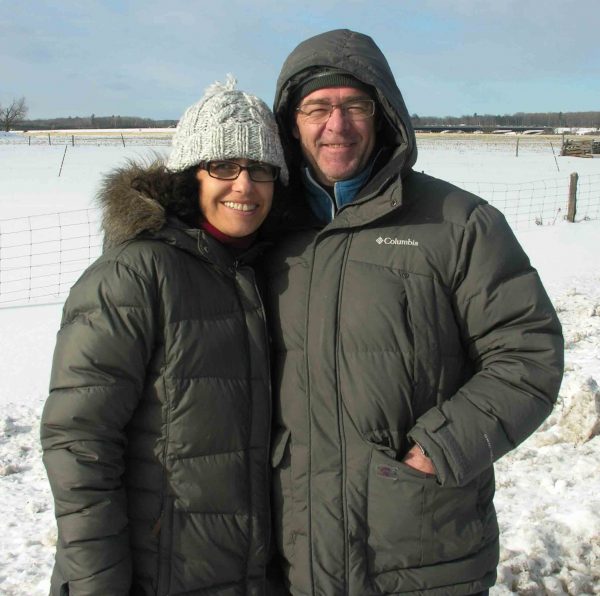 SNOWstorm heroes — Patricia and Dan Lafortune, who have been such a huge help to us this winter. (©Tom McDonald)

Easier said than done. Trapping a bird as large as a snowy owl requires specialized experience, equipment and governmental authorization, and no one in Canada with all three was available within a long drive of Baltimore’s location. So Bruce Peterjohn, the head of the U.S. Bird Banding Laboratory, reached out to the Canadian Bird Banding Office, where Marie-Anne Hudson quickly issued a letter of authorization allowing SNOWstorm’s own Tom McDonald of Rochester, NY, to try to retrap Baltimore and remove his transmitter. (For regulatory reasons, replacing it with a new unit would have been more difficult, and we opted simply to try to recover the failed device.)

So two weeks ago Tom headed north — and right into problems. His car, jammed to the roof with esoteric trapping gear, raised the understandable suspicions of Canadian border agents, and his lack of a veterinary certificate for the pigeons he was bringing as lure birds really caused an issue. After stripping Tom’s car almost to the frame, and grilling him for more than an hour, though, the agents (perhaps persuaded by Marie-Anne’s letter of authorization), finally gave up and said, “If you can be out of this building in five minutes, we’ll forget we ever saw you.”

Little did Tom know that would be the easy part. Over the next few days, Tom, Patricia and Dan found Baltimore to be a much savvier bird than the one who had allowed himself to be caught two winters in a row in Maryland. Now an experienced adult, he was shy, and stayed hundreds of yards from the nearest road, making it hard to get close enough in the deep snow to deploy traps and lures. And, as Tom and the Lafortunes quickly realized, he had plenty of meadow voles to keep his belly full. 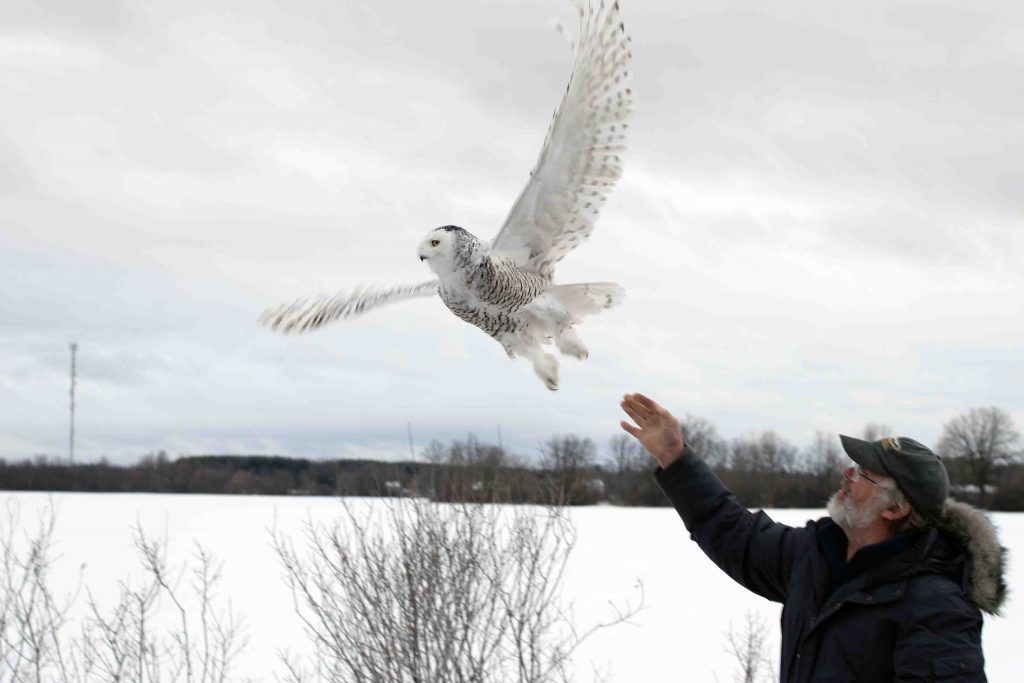 Tom McDonald releases an adult female snowy owl, one of at least five that were using the area close to Baltimore’s location. (©Tom McDonald)

It’s not that Tom couldn’t catch owls — in fact, there were too many in the neighborhood, probably drawn by the abundant rodents, including three others within a quarter-mile of Baltimore. Some of them were large females that were behaviorally dominant, and which, based on his body language, clearly made the smaller Baltimore nervous about going for the lure. Tom trapped one of the females, an adult, and with BBO permission relocated her a few miles away. But after three days, and deploying every trick he’d learned in more than 25 years of banding snowies, Tom headed home.

Less than a week later, though, he, Dan and Patricia tried again. This time Tom had pigeons and Siberian hamsters waiting for him in Canada, but the new border agents he encountered were just as suspicious as the first batch, shuffling him through three different interrogators while his car was again strip-searched.

That night Tom found Baltimore, though, and put out a buffet — a radio-controlled bownet with a harnessed pigeon, and a big bal-chatri trap with two more. A small LED light illuminated the rig so he could see what was happening. 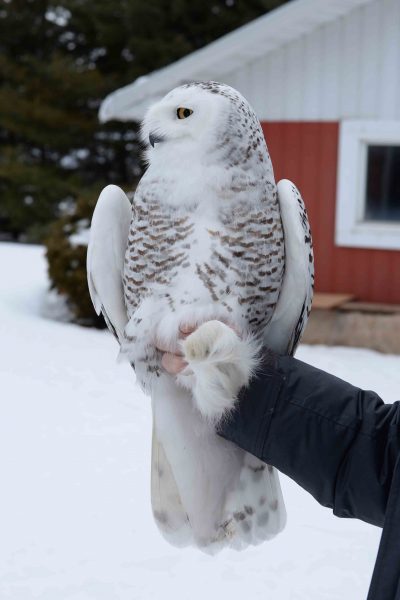 Not Baltimore — a young female snowy caught and moved by the banding team. (©Tom McDonald)

“An hour later I caught my second snowy — but not Baltimore,” Tom said. This juvenile female was, like the one the week before, relocated 10 miles down the road, but Tom said he was sure Baltimore saw the female get caught, which only would increase his wariness.

The trio put in several more days and nights, trying various traps, lures and approaches. But by the time they quit there were still three other snowies in Baltimore’s immediate vicinity. (The two females he relocated were color-marked with a small dab of pigment on the back of the head, so he knew they hadn’t just returned.) Clearly, that area of southern Ontario is holding a lot of raptor food this winter.

In all, Tom and the Lafortunes had invested a grueling 53 hours in the field (never mind two 600-mile round trips from Tom’s home in Rochester). Given Tom’s long experience with snowy owls, we’re inclined to think that if he couldn’t trap Baltimore, no one could.

Despite all the effort, Tom ticked off a long list of high points during their time trying to catch Baltimore. “We watched him bolt from his perch and hide on the ground when a juvenile golden eagle did a high fly-by,” Tom said, “and we watched him chase several other snowy owls out of his immediate territory at dusk on a few occasions. We found fresh renderings in the snow, [to show] where a large coyote had lain directly underneath Baltimore’s favorite tree.” 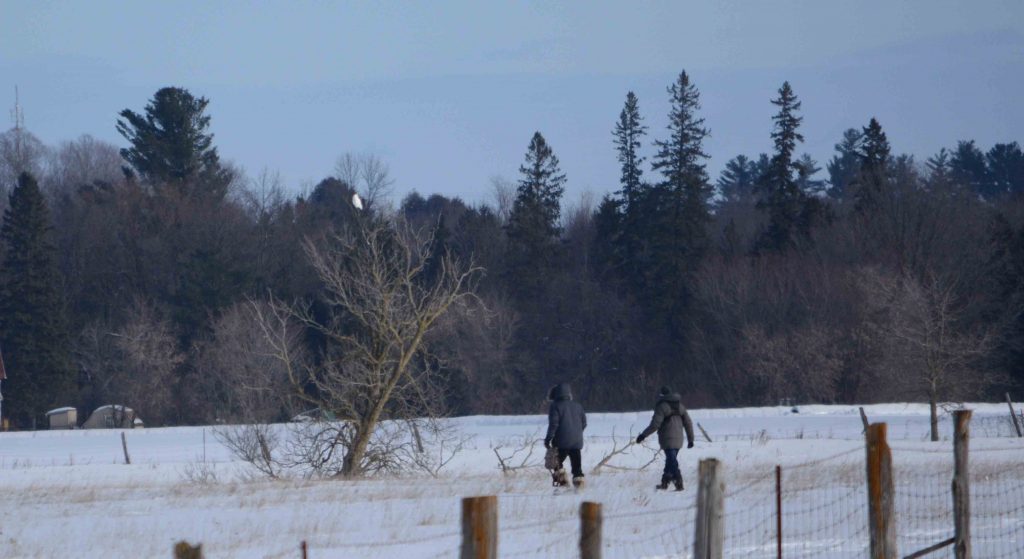 Tom and Dan (and Baltimore) — even when they could get close, the bird was too wary to catch. (©Patricia Lafortune)

“I also had the pleasure of getting acquainted with and working with Marie-Anne Hudson, and made a couple of wonderful new friends in Dan and Patricia.”

Project SNOWstorm is grateful for the BBL and BBO’s cooperation on this, to the landowners who graciously permitted the crew to work on their land, and especially grateful to Tom, Dan and Patricia for all the time they spent trying. We’re obviously disappointed with the failure of Baltimore’s transmitter, and CTT was anxious to get it back to determine the source of the problem, as well as recover the stored data from last summer. But we also recognize that this is occasional price we pay for working on the cutting edge of science, with technology that pushes the envelope.

And Tom hasn’t given up, it seems. Dan and Patricia are continuing to monitor Baltimore’s location, and Tom’s already planning yet another attempt once he’s caught his breath, especially if Baltimore shifts his location a bit to a more favorable area. And maybe he’ll be able to add to one other item on his list of high points: “I was able to spend some quality time with seven wonderful border agents over the course of two trips.”

A Perch with an Historical View (and a Big Thank You!)
CJAI's New Mascot

2 Comments on “Trying for Baltimore”